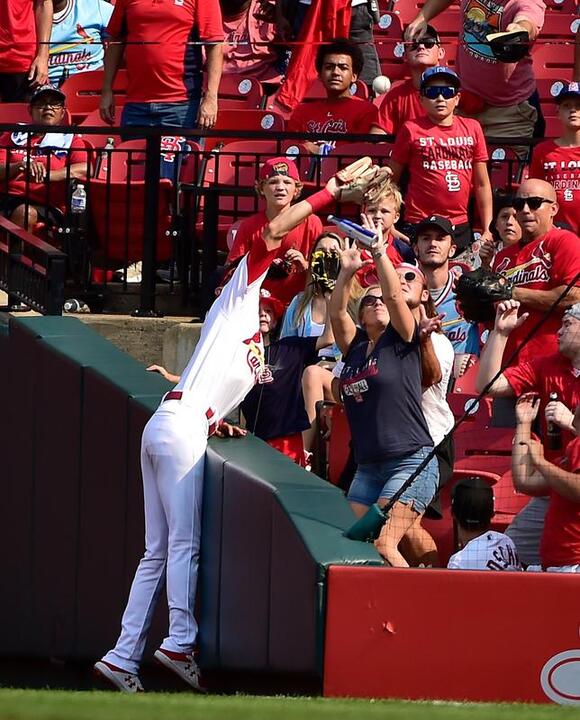 Nolan Arenado hit a two-run homer in the first inning, and five pitchers combined for a shutout Sunday as the St. Louis Cardinals beat the Cincinnati Reds 2-0.

The Cardinals (73-69) took two of three games over the weekend while handing the Reds (75-69) their sixth consecutive series loss.

Cardinals starting pitcher J.A. Happ and four relievers allowed only five hits by the Reds, who lost for the fifth time in their last seven games.

St. Louis won for the fourth time in the last five games to tighten the National League wild-card race.

Happ (9-8) allowed just two hits and one walk in 5 1/3 innings. Luis Garcia, T.J. McFarland, Genesis Cabrera and Giovanny Gallegos combined to allow just three hits the rest of the way. Gallegos got the last three outs to earn his eighth save.

Reds starting pitcher Sonny Gray (7-7) worked seven innings and allowed just two hits besides the Arenado homer. He struck out six and walked only one.

The Cardinals got the only runs they needed in the first when Tyler O’Neill hit a two-out single and Arenado followed with his home run.

In the past two games, Arenado has had a triple, two homers and five RBIs.

Happ had to work out of trouble in the third inning. Asdrubal Cabrera reached on an error leading off and Jonathan India hit a two-out single. But Tyler Stephenson grounded out to strand them.

Gray settled in and did not allow another hit until Tommy Edman hit a one-out single in the sixth inning. After Edman stole second base, Paul Goldschmidt drew a walk.

But Gray struck out O’Neill and got Arenado to fly out to end the threat.

Delino DeShields hit a leadoff double in the eighth inning off Cabrera. The Reds failed to capitalize, though, as Jose Barrero struck out, India flied out, and Stephenson struck out.

Mike Moustakas hit a two-out double in the ninth inning off Gallegos, but Max Schrock struck out to end the game.

As the 2021 season concludes, baseball fans and teams are excited for the exciting crop of MLB free agents who
NFL・1 DAY AGO
New York Post

The biggest winner of the 2021 major league season is … the 2017 Houston Astros. Settle down. I have not come to exonerate or forgive the sign stealers. I would not argue with anyone who feels the players got off easy by not facing suspension, and the bans on, say, Alex Cora and A.J. Hinch should have been longer than one year considering their one-year expulsions came in the one year the major league season was 60 regular-season games.
MLB・25 DAYS AGO
Larry Brown Sports

Alex Cora has generally made very good managerial decisions with his Boston Red Sox this year. But he made one terrible decision in Game 5 of the ALCS on Wednesday that backfired. The Houston Astros entered the top of the sixth leading 1-0 on a second inning home run by...
MLB・12 HOURS AGO

The Chicago White Sox were eliminated from the playoffs on Tuesday after losing Game 4 of their American League Division Series, 10-1, to the Houston Astros. The White Sox, specifically manager Tony La Russa, did not go quietly into the winter, however. Rather, La Russa made it clear that he...
MLB・7 DAYS AGO
The Spun

The Los Angeles Dodgers are fighting the San Francisco Giants for the NL West title and one of their fans is fighting security inside Dodger Stadium. Dodgers fans are dealing with some tough injury news surrounding Clayton Kershaw who had to leave Friday’s start early and his postseason availability is in doubt.
MLB・18 DAYS AGO

Max Scherzer started the Wild Card game for the Los Angeles Dodgers tonight. He did not make it through the fifth inning. While Scherzer gave up just one run, Dodgers manager Dave Roberts pulled his ace with one out and two men on in the top of the fifth inning.
MLB・14 DAYS AGO
FanSided

While there are sure to be some free agent signings and wheeling and dealing by Jed Hoyer this offseason, it’s a good bet that a few of your favorite September (and October) Chicago Cubs will still be playing with the team in 2022. We know that won’t be the case for all 67 of the guys the Cubs have used this season, but there’s reason for hope for a few of the bright spots amongst the new-look end of summer North Siders.
MLB・17 DAYS AGO
ClutchPoints

Chris Sale was called upon for the Boston Red Sox in Game 2 of the ALDS against the Tampa Bay Rays in what was his first postseason start since the 2018 World Series. Sale did not turn back the clock with a vintage performance but rather had an outing that he sure would like to forget.
MLB・11 DAYS AGO
CBS Boston

Will the Chicago Cubs move past the World Series champion core for good this winter? Or is a reunion (or reunions) in the cards? That’s been heavily debated among fans for the past month-and-a-half or so after Jed Hoyer sold off everything not bolted down at the July 30 deadline.
MLB・27 DAYS AGO
myrgv.com

Cardinals shut out Greyhounds in Battle of the Arroyo

SAN BENITO — For the third straight year, the Harlingen High Cardinals earned bragging rights in the Battle of the Arroyo. The No. 3 Cardinals (5-2, 3-1 in District 32-6A) picked up a 17-0 victory over the No. 4 San Benito Greyhounds (5-2, 2-2) on Friday at Bobby Morrow Stadium. Harlingen High’s defense used a superb performance to unravel the Greyhounds’ offense, recording its first shutout in the storied rivalry since 2013.
SAN BENITO, TX・5 DAYS AGO
MLB Trade Rumors

Verlander (elbow) is expected to receive a qualifying offer from the Astros this offseason, Chandler Rome of the Houston Chronicle reports. Verlander could potentially have an interesting decision on his hands. If healthy, he'd almost certainly receive more than the qualifying offer, which was worth $18.9 million over one year last year. He'll enter next season as a 39-year-old coming off of Tommy John surgery, so it's much less clear what his value will be on the open market. If he rejects the offer and signs elsewhere, Houston will receive draft-pick compensation.
MLB・13 DAYS AGO
FanSided

Remember during the AL Wild Card Game a few years back between the New York Yankees and Oakland Athletics? A matchup that resulted in a 7-2 victory for the Bombers was overshadowed by the baseball community whining about an innocent A’s fan getting three ounces of beer dumped on his head during a home run celebration.
MLB・12 DAYS AGO
USA TODAY

Three of our six experts think the NL Central champions will go on to win the World Series.
MLB・13 DAYS AGO
USA TODAY

Framber Valdez tossed eight innings to give the Astros' bullpen a much needed rest and lead Houston to a Game 5 win over the Red Sox.
MLB・8 HOURS AGO