Ed Sheeran Brings the Romance to the 2021 VMAs With ‘Shivers’ 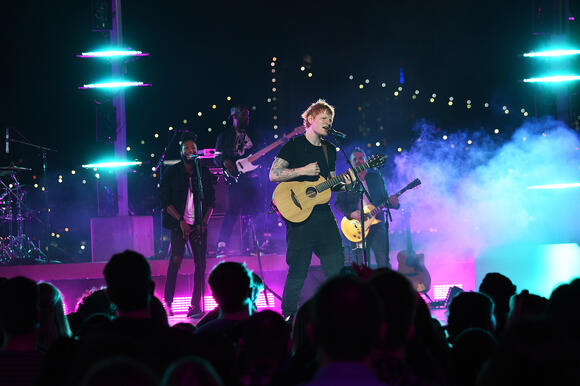 Ed Sheeran delivered a feel-good performance of his new single “Shivers” at the 2021 VMAs.

Against a cityscape backdrop with purple and green neon lights, Sheeran strummed his guitar while reflecting on the euphoric feeling of falling in love.

Sheeran is up for three awards, including Video of the Year for “Bad Habits,” the lead single off of his upcoming fifth studio album, = (pronounced “Equals”), the fourth in his symbol series. It drops on October 29th. “= (Equals) is a really personal record and one that means a lot to me,” Sheeran said in a statement. “My life changed greatly over the past few years — I got married, became a father, experienced loss, and I reflect on these topics over the course of the album. I see it as my coming-of-age record, and I can’t wait to share this next chapter with you.”

The musician is also participating in Global Citizen Live this September — with Billie Eilish, Jennifer Lopez, Coldplay, and more — and will appear on two tracks for Taylor Swift’s re-recorded version of her album Red, in both a new rendition of his and Swift’s duet “Everything Has Changed” and an unreleased song, “Run.” Moreover, he wrote one of BTS’ latest singles, “Permission to Dance.”

Ed Sheeran's proposal to wife Cherry Seaborn was far from "Perfect" — in fact, thanks to a little rain, it nearly didn't happen at all the way he'd planned. Sheeran, 30, married Seaborn in an intimate chapel ceremony in January 2019, but there were a few bumps in the road when it came to getting to that point, most notably that Sheeran wasn't even sure she'd say yes.
CELEBRITIES・14 DAYS AGO
at40.com

While Ed Sheeran may be a multi-platinum artist with countless hits and massive tours, the singer said he's just like the rest of us when it comes to nerves and proposing. Speaking on the Norwegian-Swedish talk show Skavlan, the "Bad Habits" singer recalled the day he proposed to his now-wife, Cherry Seaborn, and how it nearly all went wrong.
CELEBRITIES・14 DAYS AGO
Mashed

The Big Problem Ed Sheeran Has Eating In The US

With tons of global hits in his repertoire, Ed Sheeran never spends too much time at home in the U.K. Whether he is selling out stadiums on world tours, collaborating with Taylor Swift again, or performing at Coachella, the English singer-songwriter often finds himself in America. And when he does, he always makes sure to make a visit to Taco Bell at least once during the trip (via Audacy). "We don't get Taco Bell in England at all. Most things here you get in England," Sheeran explained to the radio group before clarifying, "I like Mexican food, but I like Tex-Mex more than I like Mexican food just because of the spices."
CELEBRITIES・5 DAYS AGO
Mashed

The Emergency Condiment Ed Sheeran Carries With Him

Unless you live under a rock, you are probably familiar with pop superstar Ed Sheeran. Like many musical prodigies, the English singer-songwriter's love affair with music began at a very young age. Sheeran began singing in church when he was just four years old and learned to play guitar when he was 11 (via Planet Radio). While he pursued his passion for music for many years, including releasing music on his own, his big break came in 2011 with the release of "The A-Team," the lead single from his debut studio album. In the first week of its release, the single sold 58,000 copies and was the top 10 song in eight countries. Today, Sheeran is one of the bestselling artists in the world and practically a household name.
MUSIC・19 DAYS AGO

Ed Sheeran's New Role on The Voice Is Simply Perfect

Ed Sheeran says he is self-isolating after testing positive for Covid-19. The chart-topping musician said in a post on his Instagram page that he would continue to give planned interviews and performances from home. Sheeran, who lives near Framlingham in Suffolk, said: "Apologies to anyone I've let down, be safe...
PUBLIC HEALTH・2 DAYS AGO
Rolling Stone

Coldplay invited Ed Sheeran onstage during their performance at London’s Shepherd’s Bush Empire last night. Sheeran collaborated with the group on a rendition of “Fix You,” from Coldplay’s album X&Y. The band also accompanied Sheeran as he played his own tracks, “Shape Of You” and recent single “Shivers.” Coldplay is set to release their ninth studio album, Music of the Spheres, on Friday October 15th. The band has been teasing the new music in a series of cryptic clues delivered via Spotify canvases and digital billboards to unveil new song lyrics from the project. “We’re excited to launch a global scavenger hunt with Spotify to unveil the lyrics from our new album Music of the Spheres,” Coldplay said in a release. “We hope fans around the world have fun following the clues and hunting down the alien billboards.” The band recently brought out surprise guests Billie Eilish and Finneas to perform “Fix You” during the band’s Global Citizen Live set at New York City’s Great Lawn in Central Park a few weeks ago. Sheeran, meanwhile, unveiled “Shivers,” his latest single, in September. The song will appear on his upcoming album, = (Equals), set to arrive October 29th via Atlantic Records.
MUSIC・13 DAYS AGO
Corydon Times-Republican

Coldplay bring out Ed Sheeran for Fix You at intimate London gig. Ed Sheeran was the surprise guest at Coldplay's intimate album launch gig this week.
MUSIC・13 DAYS AGO

Ed Sheeran’s daughter also has coronavirus. The ‘Bad Habits’ singer revealed at the weekend he had tested positive for COVID-19 and he’s now revealed he’s self-isolating with 14-month-old daughter Lyra but away from wife Cherry because the tot has also contracted the virus, while his spouse is currently negative. Ed...
PUBLIC HEALTH・12 HOURS AGO
WANE 15

Ed Sheeran has COVID, will do performances from home

Sheeran, 30, broke the news on social media days before his new studio album is due out.
PUBLIC HEALTH・1 DAY AGO
Telegraph

There was a moment during this intimate Coldplay comeback gig at London’s Shepherd’s Bush Empire when, but for the screaming, you would have heard 2,000 jaws hit the floor. Three songs in, one of the biggest bands in the world brought out Ed Sheeran, one of the biggest solo artists in the world. Both have new albums out this month – and along with Adele and ABBA, both are set to give the global music industry the massive fillip it needs this Christmas after a desolate 20 months.
MUSIC・13 DAYS AGO
thatgrapejuice.net

Things were already looking good for ‘Bad Habits,’ the comeback single from global superstar Ed Sheeran, but now the tune has welcomed an album mate into the Hot 100’s top 10. ‘Shivers,’ also found on Sheeran’s highly anticipated, October 29-due fourth studio album ‘= (equals),’ has shimmied its way into...
CELEBRITIES・6 DAYS AGO

Ed Sheeran says he gives 10 frozen lasagnas to new parent pals because he knows they’ll be too tired to cook. The father of a 13-month-old, says his priority in the gift is for the exhausted parents. In a recent interview with Mirror, he said, “Everyone sends stuff to the babies firstly, but they always forget about the mother.”
CELEBRITIES・5 DAYS AGO
The Independent

Ed Sheeran has made his CBeebies Bedtime Stories debut and read a story about a boy with a stutter. The singer-songwriter recounted his own experiences in 2015 during a speech made at the American Institute for Stuttering gala, telling the audience how rapping along to one of Eminem’s albums, which was bought for him when he was nine, helped him get over his own stutter.
MUSIC・4 DAYS AGO
WSOC-TV

Photos: Ed Sheeran through the years

Ed Sheeran's fifth album looks set to be released in 2022. The 'Shivers' singer releases his new LP '=' on Friday (29.10.21), but his manager Stuart Camp has teased that fans won't have long to wait before they hear the follow-up. Speaking about the Grammy-winner's 2022 tour in support of...
CELEBRITIES・1 DAY AGO
mymixfm.com

Ed Sheeran is supposed to be the musical guest on Saturday Night Live on November 6, but his COVID-19 diagnosis has thrown a wrench into those plans. Page Six reports that the show’s producers are now trying to fill his slot with another act, despite Ed’s offer to perform virtually.
CELEBRITIES・22 HOURS AGO
thatgrapejuice.net

Ed Sheeran is hot on the promotional trail. Case in point, the music superstar is the latest singer to appear on NPR‘s ‘Tiny Desk Concert’ series. During his time, he performed songs from his upcoming album ‘= (equals)’ such as: ‘Shivers,’ ‘Bad Habits,’ and ‘Visiting Hours.’ He also took the time to perform a new song called ‘Overpass Graffiti’ and a cover of Foy Vance’s ‘Make It Rain.’
CELEBRITIES・1 HOUR AGO
Audacy

Eminem and Ed Sheeran are both avid collectors of this

Ed Sheeran opened up about how the two bonded during a recent interview on ‘Later… with Jools Holland’ and said that he and Eminem are both ‘pen-pals’ who swap cassette tapes with one another.
CELEBRITIES・2 HOURS AGO
Variety

Ed Sheeran has given fans a preview of each song on his forthcoming album, “=” (Equals) via 14 YouTube Shorts ahead of its official release this Friday. According to the announcement, the 14 Shorts “encapsulate the very personal journey of Sheeran’s album – four-years-in-the-making – with each one bringing to life the intimate and everyday moments that are reflected in the songs. From stepping into an ice bath in ‘Shivers,’ to having a solo dance party in ‘Be Right Now,’ to taking an outdoor shower in ‘Stop The Rain,’ playing a mini ukulele in ‘Sandman,’ and simply hanging out with his...
MUSIC・1 DAY AGO