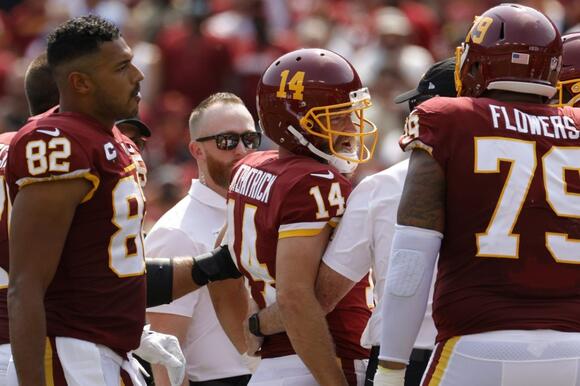 Making his first start in a season opener on Sunday, Justin Herbert picked up where he left off last year for the Los Angeles Chargers.

The second-year pro completed 31 of 47 passes for 337 yards and a touchdown pass, leading Los Angeles to a 20-16 victory against the host Washington Football Team in Landover, Md.

Herbert did throw a costly interception near the end zone with his team driving in the second quarter, picked off by William Jackson III.

But L.A.’s defense had Herbert’s back on the next play. Kyzir White forced Washington running back Antonio Gibson to fumble at his own 3-yard line, which Chargers linebacker Keith Murray Jr. recovered.

Three plays later, Herbert hit Williams for a 3-yard touchdown, giving L.A. the lead for good, 20-16 with 11:21 left in the contest. The Chargers salted the game away on the final drive, running out the clock and giving Brandon Staley his first NFL victory in his head coaching debut.

Gibson rushed 20 times for 90 yards to lead Washington, which lost starting quarterback Ryan Fitzpatrick to a right hip injury in the first half. 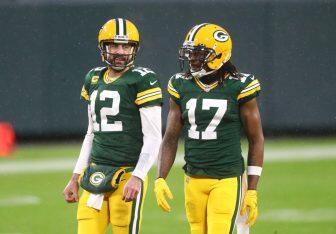 The 38-year-old signal caller had to leave the game midway through the second quarter when he was hit by L.A. edge rusher Uchenna Nwosu while trying to throw the football into the flat.

Fitzpatrick got up limping on the play and had to go back down to the turf, where he was attended to by the team’s training staff. He appeared to move OK on the sideline afterward but gave way to backup quarterback Taylor Heinicke.

Fitzpatrick completed 3 of 6 passes for 13 yards, with no touchdowns and no interceptions before the injury.

The Chargers also lost a key player to injury in safety Nasir Adderley (shoulder). Alohi Gilman replaced Adderley, who did not return.

Down 10-6 when he entered the game, Heinicke rallied Washington.

He led his team on an eight-play, 81-yard scoring drive to start the second half, capped by an 11-yard touchdown to Logan Thomas. The score gave Washington a 16-13 advantage, its first lead of the game with 11:20 left in the third quarter. 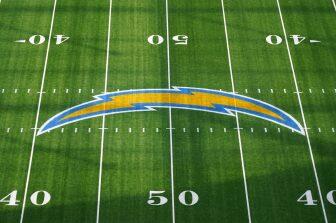 However, Dustin Hopkins missed a 51-yard field goal wide left that would have extended Washington’s lead early in the fourth quarter, allowing Herbert to engineer the winning drive later in the fourth.

Patrick Mahomes owns up to Justin Herbert remark after Chargers, Chiefs game: 'I guess I believe it'

Patrick Mahomes engaged in a bit of friendly trash-talking over the summer but was forced to own up to it when Justin Herbert and the Los Angeles Chargers handed the Kansas City Chiefs their second loss of the season on Sunday. While playing at the American Celebrity Golf Championship in...
NFL・20 DAYS AGO
Los Angeles Times

INGLEWOOD — Justin Herbert spent plenty of time in Gus Bradley’s office looking for a different point of view during his memorable rookie season. Bradley told the Chargers’ young quarterback how defenses might attack him on a weekly basis. The then-Chargers defensive coordinator was impressed by Herbert’s physical attributes, but it was his preparation that convinced Bradley that Herbert had a bright future.
NFL・14 DAYS AGO
USA TODAY Sports Media Group

It’s been complete dominance at SoFi Stadium on this Monday night, as the Chargers lead the Raiders at the half, 21-0. Following Donald Parham’s touchdown catch, Los Angeles extended their lead with a 10-yard TD reception from tight end Jared Cook in the second quarter. This marks Cook’s first touchdown as a Charger.
NFL・13 DAYS AGO

Justin Herbert provides some first half fireworks for the Chargers

Monday night’s game between the Las Vegas Raiders and the Los Angeles Chargers was delayed due to lightning in the area around SoFi Stadium. With some open areas to the stadium, the weather needed to clear in the vicinity of the stadium before it was safe to get the contest started.
NFL・13 DAYS AGO
arcamax.com

Their once 21-point lead slipping away, the Chargers needed a stop Monday night. Reserve defensive lineman Christian Covington delivered. Covington sacked Las Vegas’ Derek Carr on third down early in the fourth quarter, the Raiders missed the subsequent field-goal try, and the Chargers iced a 28-14 victory at SoFi Stadium.
NFL・13 DAYS AGO
Sportsnaut

Chargers quarterback Justin Herbert completed his 500th pass in Monday night’s victory over the Raiders. Accomplishing this feat in only 19 starts, Herbert is the only quarterback in the Super Bowl era to reach 500 passes before his 20th NFL start. The milestone came from a four-yard pass to tight...
NFL・12 DAYS AGO

Monday Night Football in Week 4 features a pivotal AFC West clash as the Las Vegas Raiders (3-0) visit the Los Angeles Chargers (2-1). Both teams are top 10 in total offense, which means you could back plenty of overs in your Monday Night Football props. Caesars Sportsbook currently lists the over-under for Derek Carr passing yards at 281.5 despite the fact that Carr has thrown for at least 382 yards in all three of his starts so far this season. Should you include Carr in your NFL prop bets, and what other NFL props should you target as these two dynamic offenses square off?
NFL・13 DAYS AGO
NBC Sports

The Raiders fell behind the Ravens 14-0 in the season opener but rallied to win 33-27. They fell behind the Dolphins 14-0 last week but came back for a 31-28 overtime victory. The Raiders will need an even bigger comeback in the second half tonight if they are going to remain undefeated.
NFL・13 DAYS AGO
Los Angeles Times

The ability to make quick decisions correctly while under pressure has proven to be a great trait for Chargers quarterback Justin Herbert.
NFL・10 DAYS AGO
Kingsport Times-News

INGLEWOOD, Calif. — Justin Herbert threw for three touchdowns, Austin Ekeler rushed for a career-high 117 yards and scored twice and the Los Angeles Chargers knocked the Las Vegas Raiders from the unbeaten ranks with a 28-14 victory Monday night. Los Angeles is 3-1 for the first time since 2014...
NFL・12 DAYS AGO

Through four weeks, the Chargers have a 3-1 record and sit atop the AFC West. Here’s a breakdown of how Los Angeles got to where they are:. Week 1 at Washington: In the 20-16 victory, head coach Brandon Staley became only the second Chargers coach to win their debut. After being known for struggling to finish games last season, Los Angeles’ comeback win made a strong statement in their season opener. The team outlasted Washington’s dominant defense with a stellar performance from quarterback Justin Herbert, who finished 31-of-47 passing for 337 yards and the game-winning touchdown.
NFL・10 DAYS AGO
ESPN

INGLEWOOD, Calif. -- It was fourth-and-2 and the Los Angeles Chargers had the ball at midfield on Monday night. Just over nine minutes remained on the clock and the Las Vegas Raiders had just missed a 52-yard field goal which would have cut the Chargers' lead to four points. The...
NFL・9 DAYS AGO
WTOP

Like the Washington Football Team’s defense as a whole, Chase Young has yet to live up to the lofty expectations for the 2021 season. In hindsight, would the Burgundy and Gold be better off had they selected stud QB Justin Herbert with the second overall pick? The answer may be surprising.
NFL・11 DAYS AGO
Sportsnaut

NFL picks against the spread: Los Angeles Chargers team to watch in Week 6

NFL picks against the spread. Week 6 edition. There’s some rather interesting games on this week’s slate, starting with the
NFL・6 DAYS AGO

Justin Herbert ‘playing at an MVP level,’ accounts for 5 touchdowns to lead L.A. Chargers to thrilling 47-42 over Cleveland Browns

Justin Herbert played like he has a real case to be considered an MVP frontrunner as the Cleveland Browns and Los Angeles Chargers engaged in one of the best NFL games of the season in a back-and-forth AFC showdown Sunday at SoFi Stadium. Herbert scored five total touchdowns and threw...
NFL・7 DAYS AGO
Canton Repository

INGLEWOOD, Calif. — Austin Ekeler scored three touchdowns, including a 3-yard score with 1:31 remaining, as the Los Angeles Chargers defeated the Cleveland Browns 47-42 in a wild shootout Sunday. Justin Herbert had his record 11th 300-yard game with 398 yards passing and tied a career-high with four touchdowns. Mike...
NFL・7 DAYS AGO
lafbnetwork.com

Justin Herbert Proves To Be Too Much; Chargers Take Down The Browns

Justin Herbert Proves To Be Too Much; Chargers Take Down The Browns. I think we all need to breathe after this game. The game was full of plenty of highs and lows that left all of us extremely relieved by the end of the game. The Los Angeles Chargers welcomed the Cleveland Browns to SoFi stadium and gave the home crowd a show. Between one tie and eight lead changes, this game had everything you would hope for in a modern NFL classic.
NFL・6 DAYS AGO
WDTN

Justin Herbert had 398 yards passing and tied a career high with four touchdowns as the Chargers rallied for a 47-42 victory over the Cleveland Browns.
NFL・7 DAYS AGO