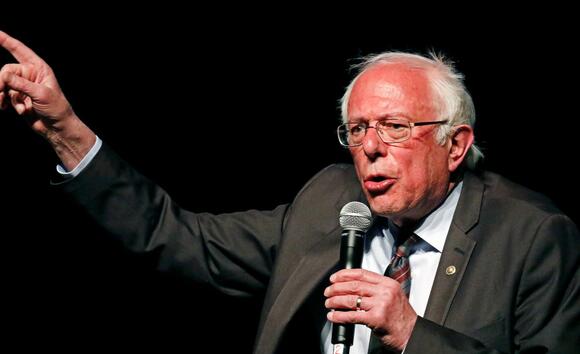 The West Virginia Democrat suggested the price tag of the legislation should be lowered to around $1.5 trillion, raising concerns that "eight million people are still unemployed" and citing the national debt ceiling.

"I don’t think it’s acceptable to the president, to the American people, or to the overwhelming majority of the people in the Democratic Caucus," he told CNN on Sunday.

"He will not have my vote on $3.5," Manchin said during a CNN interview when asked whether Senate Majority Leader Chuck Schumer would have his vote. "And Chuck knows that. And we have talked about this. We have already put out $5.4 trillion. And we have tried to help Americans in every way we possibly can. And a lot of the help that we put out there is still there, and it's going to run clear until next year, 2022."

Sanders said he is open to allowing lawmakers more time to discuss the package but pushed back on Manchin's questioning of the "urgency" behind the spending package.

“But there is a sense of urgency," Sanders argued, later adding that Democrats initially petitioned for a $6 trillion bill before it was cut down to its current price tag.

"And a sense of urgency is that we live in a country today where the wealthiest people and the largest corporations are doing phenomenally well while working-class people are struggling all over this country in terms of healthcare. You got 90 million people uninsured or underinsured,” he said.

Manchin has called for the price of the bill to be lowered to $1.5 trillion, also stoking concerns about raising money with taxes and arguing that former President Donald Trump's 2017 tax cuts were “weighted to the wealthy.”

The West Virginia senator called on Democrats in a recent op-ed to “hit a strategic pause” on the $3.5 trillion spending measure after the Afghanistan withdrawal and amid rising inflation.

The framework has been projected to add more than $1.75 trillion to the federal deficit over the next decade.

This is Socialist Bernie Sanders agenda! They knew true Americans would never vote for a Communist Socialism that he and AOC push!!

I love when senator Sanders tells everyone what the American people want..😂

that's some strong words for an old man. whose only real job has been politician. Joe Manchin worked for his money.

President Joe Biden made a number of false or misleading claims at a town hall event in Baltimore on Thursday as he attempted to sell his party's spending legislation.
BALTIMORE, MD・1 DAY AGO
WashingtonExaminer

President Joe Biden has dished on his closed-door negotiations with congressional Democrats over his $2 trillion social welfare and climate spending package.
PRESIDENTIAL ELECTION・16 HOURS AGO
WashingtonExaminer

Upon her return to Capitol Hill from a meeting at the White House on Friday, House Speaker Nancy Pelosi told reporters that a deal was within reach on congressional Democrats’ sweeping social spending package.
CONGRESS & COURTS・1 DAY AGO
NBC News

Sen. Joe Manchin, D-W.Va., is reportedly pushing back on parts of President Biden’s infrastructure bill that would tackle climate change as well as the child tax credit. NBC News’ Cal Perry is in Charleston, West Virginia, to explain how the senator’s constituents are reacting as the infrastructure bill remains in limbo. Oct. 22, 2021.
CHARLESTON, WV・1 DAY AGO

I Was Wrong About Joe Manchin

Back in winter 2021, the media-industrial complex evaluating conservative Democratic West Virginia Sen. Joe Manchin was devoted to predicting the role he would play in the Biden administration. It was still a time when we weren’t sure what the most conservative Democrat in the caucus—the last major Dem standing in his deep-red state, one who’d voted with Republicans about 50 percent of the time during the Trump years—would do now that his party was in power. Longtime D.C. watchers, West Virginia experts, climate scientists, and Beltway journalists put forth theory after theory after theory. Some thought he’d be Democrat in name only and insisted he would halt the leftward progression of the party. Others predicted that he could maybe be good for the Dems, depending, or was perhaps even a political magician. I myself penned a profile of the senator whose headline—“Joe Manchin Is Not a Fossil”—could also be understood as its thesis statement. Manchin was indeed a conservative with staunch fossil fuel industry ties, I argued, but he wasn’t stuck. This was particularly true when it came to climate change, I thought, because he kept the welfare of West Virginians in mind, as demonstrated by his frequent town halls and engagement with his constituents. They are, after all, uniquely vulnerable to climate effects.
CONGRESS & COURTS・1 DAY AGO
POLITICO

One of Republicans' most prized Senate recruits, Chris Sununu, says he'll make up his mind on whether to run in the next few weeks.

His entrance would immediately make the New Hampshire race a tossup. Timing thoughts: Calling in to WMUR, New Hampshire Gov. Chris Sununu said he's nearing a decision on whether to challenge Sen. Maggie Hassan (D-N.H.) in the 2022 Senate race. “I got a job to do — I’ve been focusing...
U.S. POLITICS・1 DAY AGO
Business Insider

Moderate Democratic Senator Joe Manchin of West Virginia said Thursday he had offered to drop his formal affiliation with the Democratic Party and instead be independent if he were causing a "problem" for the caucus. He was asked by reporters at the Capitol about a report that he had threatened...
CONGRESS & COURTS・2 DAYS AGO

Sitting a few feet from President Joe Biden during his speech to commemorate the Martin Luther King Jr. Memorial's 10th anniversary, Vice President Kamala Harris was well-positioned to issue a quick correction when the president needed it. Touting the size of the American Rescue Plan, a stimulus package passed in...
POTUS・2 DAYS AGO
The Guardian

With his approval levels sagging and negotiations dragging on his signature infrastructure and social spending bills, President Joe Biden is bringing his pitch directly to the American public in an effort to press Democrats in Congress to come to a deal.
PRESIDENTIAL ELECTION・2 DAYS AGO

Scoop: “How about zero?” Manchin, Sanders get heated behind closed doors

Sens. Joe Manchin (D-W.Va.) and Bernie Sanders (I-Vt.) squabbled behind closed doors Wednesday, with Manchin using a raised-fist goose egg to tell his colleague he can live without any of President Biden's social spending plan, Axios has learned. Why it matters: The disagreement, recounted to Axios by two senators in...
CONGRESS & COURTS・2 DAYS AGO
WashingtonExaminer

Clyburn says nothing is sacrosanct in spending bill, breaking from fellow Democratic leaders

Neera Tanden will take over as White House staff secretary seven months after her name was withdrawn as President Joe Biden's nominee to direct the Office of Management and Budget.
POTUS・1 DAY AGO
MSNBC

A growing number of Senate Democrats have voiced support for reforming existing filibuster rules, if not for all legislation, then at least to protect Americans' voting rights. Senate Majority Leader Chuck Schumer, however, has been far more cautious about stating his preferred course. Indeed, for nearly a year, the New...
CONGRESS & COURTS・2 DAYS AGO

The White House said Friday that President Joe Biden would speak in the coming weeks about moving to “fundamentally alter" the filibuster or even eliminate the legislative roadblock that empowers the Senate minority as he aims to pass sweeping voting laws and secure the nation's credit.
PRESIDENTIAL ELECTION・1 DAY AGO
WPRI 12 News

A deal within reach, President Joe Biden and Congress’ top Democrats edged close to sealing their giant domestic legislation, though the informal deadline appeared to slip as they worked to scale back the measure and determine how to pay for it
PRESIDENTIAL ELECTION・7 HOURS AGO
Business Insider

Democrats are trying to circumvent Sinema in the social spending plan. One tax alternative would pursue massive wealth gains by the rich in the stock market.
CONGRESS & COURTS・2 DAYS AGO
Reuters

WASHINGTON, Oct 22 (Reuters) - The White House on Friday offered a strong signal that it is preparing to seek changes soon to a long-standing Senate tradition that has allowed Republicans to block voting rights legislation and other major Democratic initiatives. Democratic President Joe Biden, who spent 36 years in...
PRESIDENTIAL ELECTION・1 DAY AGO