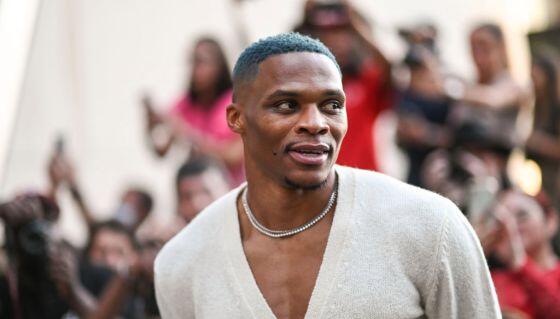 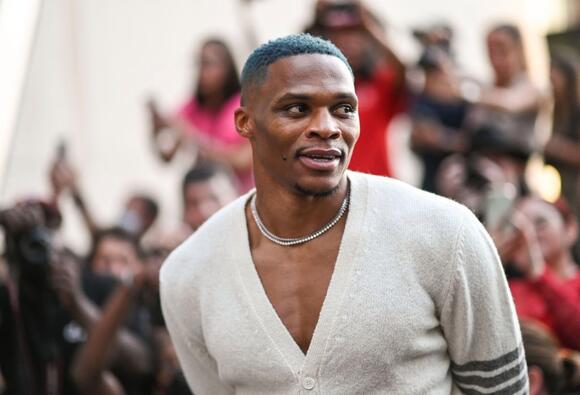 R ussell Westbrook has stirred up some controversy on the internet once again.

Last time it was because it was announced he’d be joining the already stacked Los Angeles Lakers as the West Coast team looks to nab its second championship in 3 seasons, but now it’s got to do with his latest outfit.

Westbrook has been known to shock fans with his tunnel fits or outlandish shirts we’ve seen him rocking in the club, but this go-’round, a lot of people are perplexed because a recent Instagram photo shows him wearing a skirt. The gallery of three pictures have Westbrook donning a cream Thom Browne cardigan with its signature 4 bars on the arms and red, white and blue stripes atop a long pleated white skirt. He finished the fit with a high-top pair of combat boots and two understated diamond chains. Oh, and did we mention the blue hair?

As we mentioned before, Westbrook’s never one to shy away from rocking something new, but apparently, he’s worn a kilt before. Back during the 2016-17 NBA season opener as the Oklahoma City Thunder took on the Sixers, Westbrook wore a plaid kilt .

There’s nothing wrong with Westbrook breaking gender norms and rocking a skirt to the Thom Browne Spring 2022 Collection show, so while Twitter did show support, a few users were completely confused by the outfit choice.

Check out some of the reactions below.

look like my Lakers gonna win the Chip.. Westbrook done sold his soul.. It's a shame that our brothers that are consider elite, sell there gift from God.. I'm just about over all sporting events at this point..

Anthony Davis’ message to Russell Westbrook after lackluster Lakers debut: ‘Be the reason why we traded for you’

The Los Angeles Lakers’ 2021-22 season opened in disappointing fashion on Tuesday, as the team dropped a 121-114 decision to the Golden State Warriors. It was a rough debut for Lakers newcomer Russell Westbrook. After the game, superstar Anthony Davis revealed his strong message to the former MVP. “We want...
NBA・5 DAYS AGO
fadeawayworld.net

The Wild Trade Idea That Would Shake The NBA: Russell Westbrook For Kyrie Irving

The Los Angeles Lakers have lost their last two games of the regular season, being beaten by the Golden State Warriors and the Phoenix Suns. There's no question that this was not the start that many people envisioned from the Lakers. The Brooklyn Nets did win their recent game against...
NBA・2 DAYS AGO
uticaphoenix.net

Wizards GM says Russell Westbrook rejected the idea of a

Russell Westbrook was interested in being traded to one Los Angeles team — and one Los Angeles team only. The Wizards sent Westbrook to the Lakers this past offseason as part of a five-team trade, but it turns out there may have been another path out of Washington for the nine-time All-Star. In an interview with NBC Sports Washington’s Chris Miller, Wizards general manager Tommy Sheppard declared that, while Westbrook didn’t demand a trade, he did shut down any conversations about joining the Clippers.
NBA・7 DAYS AGO
ClutchPoints

The Los Angeles Lakers are winless in six preseason games. But you’d be hard-pressed to see Russell Westbrook or any of their other stars sweating it. The Brodie was asked about the Lakers’ goose egg in the preseason win column, and he gave the perfect response to whether it means anything.
NBA・11 DAYS AGO

📹: Russell Westbrook Slaps Man Who Tried To Grab His Shoes

Westbrook wanted to give his game-worn kicks to a kid when a man tried to grab the pair off of him. Russ had no other choice but to fend off the man (h/t Bleacher Report on Instagram): The Lakers guard didn't hit the guy and his slap was more of a gesture rather than an actual attempt to swat the fan. He just wanted to make sure that his shoes went to one of the kids in the audience.
NBA・14 DAYS AGO
lakers365.com

While Russell Westbrook brings a lot of things to the Los Angeles Lakers, one thing that he would never be considered is a great shooter. While he can certainly get hot at times, Westbrook isn't necessarily a floor spacer, which is why the NBA's rule changes to fouls drawn with 'unnatural' shooting motions isn't a concern to him. Over the past few seasons, there has been a big rise in players going out of their ways to draw fouls on defenders who are either stationary or jumping straight up and ...
NBA・12 DAYS AGO
lakers365.com

In two games played, Westbrook has turned the ball over 15 times while shooting an ugly 4-for-19 from the floor. Yet, despite being unable to get into a groove and committing turnovers at an alarming rate, the one-time NBA MVP isn't concerned, nor does he believe it's an issue with implementing Frank Vogel's offense. Oh, it's fine," Westbrook said.
NBA・14 DAYS AGO
Yardbarker

Russell Westbrook On When Lakers Will Start To Click: "Nobody Has An Answer For That... We Have One Goal In Mind And That's To Win A Championship."

The Los Angeles Lakers are yet to win their first preseason game. The purple and gold enter the 2021/22 NBA season with high expectations, hoping to reclaim their throne after a disappointing 2020/21 campaign. Their second game against the Golden State Warriors saw their Big 3 play together for the...
NBA・12 DAYS AGO

Shannon Sharpe on Russell Westbrook's preseason debut: 'This isn't the start the Lakers hoped for'

The new-look Los Angeles Lakers struggled this weekend as Russell Westbrook played his first two preseason games for the purple-and-gold. The former MVP had 15 turnovers in 2 games. Shannon Sharpe weighs in on Westbrook's performances.
NBA・14 DAYS AGO
People

NBA star Russell Westbrook is changing the narrative about himself through his new documentary, Passion Play. Ahead of his first season with the Los Angeles Lakers, the 32-year-old athlete released the Showtime film that gives fans an inside look at his life, career, and — most importantly — his character. As an athlete whose attitude and character are often scrutinized, Westbrook is ready to shed new light on himself.
NBA・10 DAYS AGO
FanSided

Russell Westbrook pokes fun at self over shooting struggles

Dirty Harry once said, “A man’s gotta know his limitations.” Russell Westbrook seems to agree with that assertion. The new Los Angeles Lakers guard spoke with reporters following Tuesday’s preseason loss to the Golden State Warriors. Westbrook was asked about the NBA’s new foul rules that will stop rewarding shooters for initiating contact with airborne defenders. The former MVP responded with a funny joke about his well-documented shooting struggles.
NBA・12 DAYS AGO

The Whiteboard: How worried should the Lakers be about Russell Westbrook?

The Whiteboard is The Step Back’s daily basketball newsletter, covering the NBA, WNBA and more. Subscribe here to get it delivered to you via email each morning. The preseason is the preseason for a reason. The games don’t count in the standings, both teams are testing lineups and systems, slowly working their stars into game shape and taking a look at younger players who might not be on the court much once the actual games start. The predictive value of preseason play is shaky but teams and players would at least like to build some positive momentum for the regular season.
NBA・13 DAYS AGO
fadeawayworld.net

Courtside Fan Starts Awkward Confrontation With Russell Westbrook During Preseason Game: "Where The Hair Dye At?"

On the court, Russell Westbrook is a fierce and ferocious competitor, and often gives off a spark of energy that ignites the entire team. Off the court, Westbrook is somewhat of a fashion icon. We've seen him, on many occasions, rock wacky and bold ensembles on his body, and they...
NBA・10 DAYS AGO
Yardbarker

Sure, the Lakers haven't played with their full arsenal of big guns so far this preseason, but with the Los Angeles squad going 0-4 so far through exhibition play, it's fair to wonder if the preseason woes foreshadow some early regular-season struggles. Anthony Davis told the press Sunday he isn't...
NBA・14 DAYS AGO
Inside The Thunder

Some might call Juhann Begarin a draft-and-stash, but one former NBA general manager refers to him as more of a “poor man’s Russell Westbrook.”. The 19-year-old from Guadeloupe was drafted No. 45 overall by the Boston Celtics and plays for Paris Basketball, which is owned and operated by David Kahn. Kahn, former GM of the Minnesota Timberwolves from 2009-13, has worked with Begarin since he was 17 and projected a lot of upside.
NBA・12 DAYS AGO
NBA Analysis Network

Things have not started well for the Los Angeles Lakers during the NBA preseason. The team has struggled to find any consistency, which was expected since they have so many new players finding their way with the team. Right now, the Lakers are 0-5 and there haven’t been many positives...
NBA・12 DAYS AGO
chatsports.com

Much like the Los Angeles Lakers, we here at the Silver Screen & Roll podcast feed are also working out the rotation kinks as we embark on the 2021-2022 season. As such, this week, “The Hook” got moved from Friday to Wednesday. We still tried to bring the Friday vibes though.
NBA・12 DAYS AGO
ClutchPoints

It’s clear that Russell Westbrook is still adjusting to his new situation with the Los Angeles Lakers. The prolific playmaker has had a mediocre stint so far for the Purple & Gold, prompting some fans to already express concerns. Westbrook had a turnover-filled debut for the Lakers in the preseason...
NBA・14 DAYS AGO