Dixon takes to Twitter after being called out by Swinney 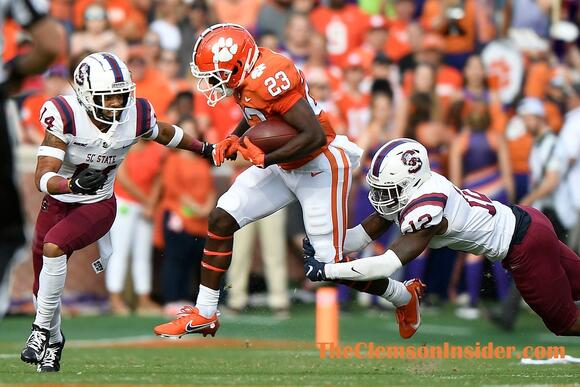 Through two games, Lyn-J Dixon hasn’t been a big part of Clemson’s offense.

The senior running back recorded only four carries for 27 yards in the Tigers’ 49-3 win over South Carolina State on Saturday after rushing just one time for 10 yards in the season-opening 10-3 loss to Georgia on Sept. 4.

Dixon made another appearance late in the second half against SC State and caught a 14-yard touchdown pass, but his four carries were the fewest among the Tigers’ primary backs Saturday.

After Saturday’s game, head coach Dabo Swinney was asked what Dixon needs to do to be a bigger part of the offense going forward.

“He just needs to grow up,” Swinney said. “It’s that simple. He needs to be a team player. He’s a good player. Obviously he’s very talented and we’ve seen that, but we need him to stay out of (running backs coach C.J.) Spiller’s doghouse.”

Dixon took to social media this morning with a couple of Tweets in what was likely a response to Swinney’s comments:

Football season has finally arrived. Time to represent your Tigers and show your stripes! 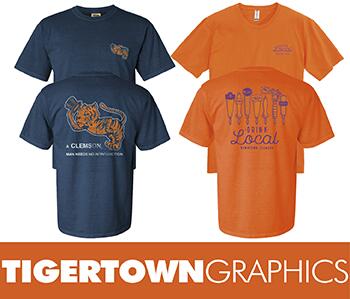 Is it time for Clemson head coach Dabo Swinney to turn to another quarterback? Should the Tigers bench D.J. Uiagalelei?. The Clemson Tigers are in the midst of an uncharacteristically rough season. The Tigers, who have recently ascended to becoming one of the most prominent programs in the country, have appeared vulnerable and mortal throughout the year up to this point.
CLEMSON, SC・4 DAYS AGO
ClutchPoints

Dabo Swinney’s Clemson Tigers were expected to experience some regression in the 2021 college football season after losing quarterback Trevor Lawrence and running back Travis Etienne to the NFL over the offseason. But even when considering those huge subtractions from the offense, Clemson is definitely one that’s been underperforming on that side of the ball, and DJ Uiagalelei is catching heat, as he continues to search for stability under center.
NFL・3 DAYS AGO
The Clemson Insider

Paul Finebaum calls Dabo Swinney a lousy loser: 'They're done for the season'

Paul Finebaum never seems to hold back when it comes to Clemson coach Dabo Swinney. The latest comments came after Clemson lost to N.C. State on Saturday. “Dabo Swinney, for all of his charm, is a pretty lousy loser,” Finebaum said on the ESPN College Football Podcast. “Nobody wants to hear his wine, nobody really wants to hear him say whatever he says. He’s a good winner — well, he’s not even a good winner. But he’s a terrible loser.”
COLLEGE SPORTS・23 DAYS AGO

Tim Tebow fires back at Paul Finebaum's criticism of Clemson

Clemson has seen major struggles to begin the 2021 season. The Tigers are 2-2 on the year after a double overtime loss to a quality NC State team in Week 4. Clemson’s offense has not been good to start the year, and that resulted in ESPN’s Paul Finebaum laying into Clemson’s struggles, going as far to say as the Dabo Swinney dynasty is over.
CLEMSON, SC・18 DAYS AGO
The Clemson Insider

Swinney on if Shipley will play against Pitt

During his Zoom conference call with reporters on Sunday evening, Clemson head coach Dabo Swinney was asked about the injury status of freshman running back Will Shipley heading into this Saturday's game (...)
COLLEGE SPORTS・2 DAYS AGO
Sportsnaut

10 highest-paid college football coaches (and are they worth it?)

Want to know just how much money the highest-paid college football coaches make? Click here to find out Nick Saban's salary and the top 10 highest-paid coaches.
NFL・2 DAYS AGO
FanSided

Clemson football isn’t used to struggling like this on offense and offensive coordinator Tony Elliott could soon find himself out of a job as a result. It’s been a forgettable year for Clemson football and their fans. The Tigers aren’t going to make the College Football Playoff after suffering two losses in September and winning the ACC may not be a certainty either.
CLEMSON, SC・4 DAYS AGO

For Swinney, this particular offensive issue is 'beyond frustrating'

Dabo Swinney was a receiver during his playing days at the University of Alabama. He began his coaching career instructing that position and still works often with Clemson's receivers during practice. So it’s (...)
COLLEGE SPORTS・2 DAYS AGO
The Clemson Insider

Swinney on Uiagalelei: ‘I thought he played his best game’

Clemson head coach Dabo Swinney made it clear in his postgame press conference what he thought of his quarterback D.J. Uiagalelei’s performance Friday night during the Tigers’ 17-14 win over Syracuse (...)
COLLEGE SPORTS・4 DAYS AGO
The Clemson Insider

Clemson reaches into bag of tricks for 'huge game-changer'

SYRACUSE, N.Y. -- Clemson’s offense continues to do its part in making sure the Tigers play the same game each week, and that’s not a good thing. A week after seemingly taking a couple of steps forward (...)
SYRACUSE, NY・4 DAYS AGO

Dabo Swinney Says He's Not Interested in LSU Job, Will Stay at Clemson

Swinney updates injury status of his team after Syracuse game

During his Zoom conference call with reporters on Sunday evening, Clemson head coach Dabo Swinney gave an update on the health status of his team following Friday's game at Syracuse. "Injury wise, that game, (...)
SYRACUSE, NY・2 DAYS AGO
The Clemson Insider

Swinney’s message to players: ‘Get off of that mess’ on social media

During his press conference Tuesday, Clemson head coach Dabo Swinney discussed how the Tigers’ offense has been “burdened” by expectations, disappointment and outside noise, saying that as a (...)
COLLEGE SPORTS・1 DAY AGO
The Clemson Insider

Swinney has some good news on the injury front

Slowly but surely, Clemson has been getting some of its injured players back in the fold. Head coach Dabo Swinney is optimistic that will continue this week. Swinney said during this weekly radio show (...)
COLLEGE SPORTS・1 DAY AGO

Dabo Swinney jokingly expressed a level of surprise Tuesday when a reporter said he was among the big-time coaches named as options to take the head coaching job at LSU. “I made a big-time list? Wow,” the Clemson head coach said, sarcastically. The Athletic’s Bruce Feldman said Swinney could get...
COLLEGE SPORTS・1 DAY AGO
247Sports

Dabo Swinney addresses the media during his weekly press conference on Tuesday ahead of Saturday's matchup between Clemson (4-2, 3-1) and No. 23 Pittsburgh (5-1, 2-0) in Pittsburgh. Live updates will be in the comment section below.
COLLEGE SPORTS・1 DAY AGO
The Clemson Insider

Clemson head coach Dabo Swinney says the Tigers will face the best offensive opponent they have faced this year when they travel to Pitt Saturday. Coach Swinney gives the latest on injuries, responds to his (...)
COLLEGE SPORTS・1 DAY AGO
The Clemson Insider

During his radio call-in show Monday night, Clemson head coach Dabo Swinney fielded a question from a caller about name, image and likeness, and how the new NIL rules are affecting him and his staff. (...)
COLLEGE SPORTS・20 HOURS AGO