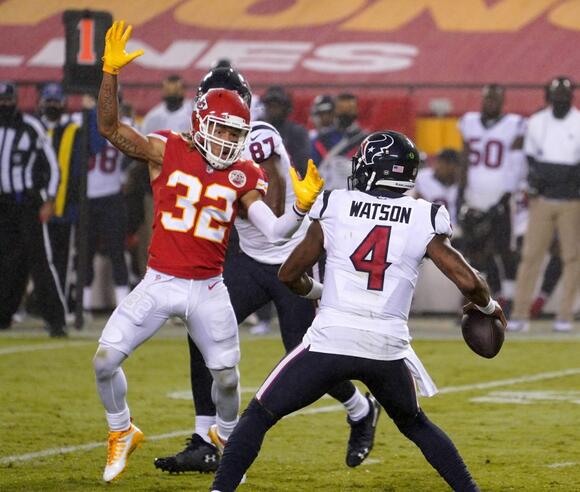 Houston Texans quarterback Deshaun Watson is inactive for Week 1 of the 2021 NFL season and he’ll likely be out every game for a while. But a new timetable is emerging for when a blockbuster trade might unfold during the regular season.

The Texans wanted to avoid putting Watson on their 53-man roster before the season, exploring trades with several clubs. Houston had significant negotiations with the Miami Dolphins, with the AFC contender emerging as the frontrunner for a deal. But with the Texans unwilling to back down from their asking price, Miami walked away.

Watson is now on the Texans’ roster and he’ll stay on it with the NFL waiting to place him on the Commissioner’s Exempt list until criminal investigations into allegations of sexual misconduct and assault conclude. As a result, the Texans plan to keep him inactive until a trade can be worked out. 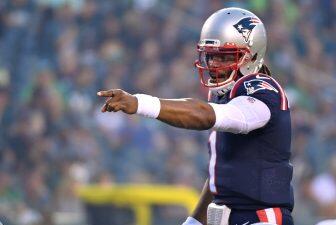 According to NFL Network’s Ian Rapoport , a Watson trade could be revisited close to the NFL trade deadline on Nov. 2. The Dolphins, Philadelphia Eagles , Carolina Panthers and Denver Broncos all expressed interest in acquiring him earlier this offseason.

With Watson facing 22 civil suits alleging sexual assault and misconduct, in addition to 10 criminal complaints , those clubs have backed off. Furthermore, with the NFL season underway, general managers want to see how their quarterbacks perform before determining if they’d make a Watson trade.

Even if multiple teams want to revisit a deal, Houston’s asking price could be a major hurdle to overcome.

What do the Texans want for Deshaun Watson?

As Watson’s legal team battles 22 civil suits, the Pro Bowl quarterback is also facing an investigation by the Houston police department , the FBI is looking into allegations against him and the 25-year-old is the subject of a grand jury investigation.

It’s created a lot of uncertainty surrounding his NFL future. Even if he isn’t convicted on criminal charges, the NFL could suspend him for violating the league’s personal conduct policy. There are currently no signs of a settlement in the civil suit and that joint case isn’t set to be heard until 2022. 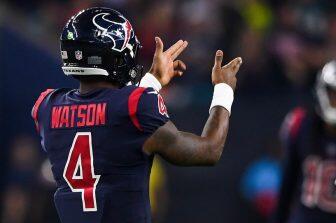 The Texans want premium picks and players, too. Caserio reportedly insisted on three first-round picks and additional assets from the Dolphins. If an NFC team wants him, it would likely require a pair of future first- and second-round picks along with young players.

As of now, no team is willing to meet that asking price. Clubs are willing to do it conditionally, with the return lessened if Watson is suspended or criminal investigations determine he committed sexual assault. But the Texans aren’t willing to do that.

For the time being, Deshaun Watson is stuck in Houston. The franchise will start Tyrod Taylor in Week 1 and rookie Davis Mills is waiting for an opportunity behind him.

The Texans will certainly keep exploring deals during the season, with Caserio one of the most active general managers on the trade market. But barring sudden resolutions to his criminal and civil cases, Watson won’t be seen on the field anytime soon and he will never play for the Texans again.

Thus far, the first three games of his sophomore campaign has been up and down for Philadelphia Eagles quarterback Jalen
NFL・14 DAYS AGO
ClutchPoints

Houston Texans quarterback Deshaun Watson remains with the AFC South organization as it stands today, but the troubled signal-caller could soon be on the move. With the Miami Dolphins long being linked to Watson, who is still facing some very serious sexual assault allegations and presumably more than a few legal battles ahead, the Texans have continually tried to distance themselves from the former first round NFL Draft pick. In addition to the Dolphins, there is apparently at least one other team that has at least checked in on Watson and his availability via trade.
NFL・9 DAYS AGO
The Spun

Earlier this week, the Philadelphia Eagles made a surprising decision regarding one of the team’s wide receivers. Following the team’s win over the Carolina Panthers this weekend, the Eagles released wide receiver Travis Fulgham. The move comes a year to the day after Fulgham had a breakout game against the Pittsburgh Steelers.
NFL・2 DAYS AGO
FanSided

How close are the Miami Dolphins to trading for Deshaun Watson?

The Miami Dolphins and Deshaun Watson have been linked together for months now. With the trade deadline approaching on Nov. 2 how close is the Watson trade from being done?. In speaking with Alex Donno of 5 Reasons Sports Network, who has a source with connections to Nick Caserio, Texans GM, Donno mentions that the offer proposed to the Texans was three first-round picks, one second-round pick, and two third-round picks.
NFL・8 DAYS AGO

HOUSTON -- Houston Texans chairman and CEO Cal McNair was noncommittal on the prospects of potentially trading. embattled Pro Bowl quarterback Deshaun Watson by the NFL trade deadline. Watson has issued a standing trade request and has a powerful no-trade clause in his $156 million contract. His trade outlook is...
NFL・8 DAYS AGO
nfltraderumors.co

Colts’ RB Marlon Mack says that the team has mutually agreed to trade him and is supportive of his request. In the meantime, Mack says he will continue to focus on getting wins for the Colts until his request is honored. “Just had an agreement with what’s best for me,’’...
NFL・13 DAYS AGO
chatsports.com

Deshaun Watson trade status: Could the Texans deal the QB before the deadline? Everything we know, plus potential suitors

Deshaun Watson's situation is the puzzling and perplexing elephant in the NFL's 2021 room. The 26-year-old quarterback is not injured. He is on a roster -- the Houston Texans', specifically. He shows up at the team facility every day, healthy enough to practice and play, but he does little of the former and none of the latter. He works out with Texans staff members but is not part of anything related to the weekly game plan. When the team practices, he's often in the weight room or conducting a workout plan of his own.
NFL・9 HOURS AGO
ClutchPoints

The Houston Texans lost their starting quarterback Tyrod Taylor in Week 2, but despite that there seemed to be no chance at all the team even considered going with disgruntled and disgraced star Deshaun Watson in his place. After a lopsided Week 3 loss with David Mills at the helm,...
NFL・13 DAYS AGO

Houston Texans superstar remains at the forefront of trade talks

HARLINGEN, Texas (ValleyCentral) — Houston Texans quarterback Deshaun Watson continues to be the subject of trade rumors while having over 20 civil lawsuits of sexual assault and misconduct pending against him. NFL Insider Jay Glazer mentioned on Twitter Wednesday that a trade involving Watson could be on the horizon. “When we went into the season, […]
NFL・13 DAYS AGO
Pro Football Rumors

Eagles reportedly 'not in the mix' for Texans' Deshaun Watson

Deshaun Watson is set to go into his fourth game as a healthy scratch for the Texans, but the team is believed to be more open to making a deal. The Texans have softened their asking price for the embattled Pro Bowler. While the Dolphins are the team most closely...
NFL・14 DAYS AGO
FanSided

Buffalo Bills: Inactives for Week 4 against the Houston Texans

The Buffalo Bills announced their inactives for Week 4 against the Houston Texans but entered the weekend already knowing of at least two players who would not be available. Starting safety Jordan Poyer is dealing with an ankle injury and he was ruled out on Friday. This is only Poyer’s...
NFL・12 DAYS AGO
Pro Football Rumors

Deshaun Watson is still on the Houston Texans, but team chairman and CEO Cal McNair insinuated that the trade winds could change on a dime. While McNair wouldn’t rate the team’s chances of trading Watson before the November 2 trade deadline, he did say the situation is fluid and “day-to-day.”
NFL・8 DAYS AGO

Deshaun Watson will most likely have to wait until his legal situation gets sorted out before he takes another snap in the NFL. That doesn’t mean he can’t be traded, though. The Miami Dolphins have been considered the frontrunner for Watson if he does get shipped out of Houston. However,...
NFL・10 DAYS AGO
FanSided

The Houston Texans played improved football at quarterback in Week 5, and that showed in their overall numbers with much better individual stats and team points scored. That said, the problem was the defense of the Texans in the second half where the Patriots used a late field goal to win 25-22.
NFL・4 DAYS AGO
Yardbarker

Ahead of the Week 5 showdown between the Houston Texans and New England Patriots, both 1-3, unsettled Houston quarterback Deshaun Watson still wishes to be traded, remains a paid, unused signal-caller for each game, and continues to face 22 lawsuits alleging acts of sexual assault and misconduct and 10 criminal complaints that are making it difficult for the Texans to find a buyer at the right price.
NFL・8 DAYS AGO
chatsports.com

Glazer: Deshaun Watson Trade Not Being Pursued by Eagles Amid Jalen Hurts Struggles

The Philadelphia Eagles are reportedly "not in the mix" for Deshaun Watson, according to Jay Glazer of Fox Sports. Glazer reported Sunday the Houston Texans were initially looking for six draft picks in exchange for the quarterback, but the demands have "started to soften a little bit." Watson has been...
NFL・14 DAYS AGO
USA TODAY Sports Media Group

No surprise a rookie QB is having a big game as the New England Patriots face the Houston Texans in a Week 5 game on Sunday. The shock, however, is that it is Houston’s Davis Mills and not Alabama’s prized first-round pick Mac Jones. The first TD toss of the...
NFL・5 DAYS AGO
FanSided

Deshaun Watson rumors: Texans about to make a move?

The Deshaun Watson and Houston Texans trade rumors are at it again, and this time one of the biggest national media outlets is talking about a possible trade looming. When it comes to any talk involving Deshaun Watson trade rumors, one had to take it with a grain of salt so to speak because so much of it is opinion, though some is vague reporting with sources that may or may not be giving correct information.
NFL・14 DAYS AGO
CBS Tampa

Fantasy Football Start Or Sit Week 6: Will Darrel Williams Get Enough Touches For The Chiefs?

(CBS Boston) — Having one of the Kansas City Chiefs’ offensive skill players in your fantasy lineup can certainly help your scoring output. But that hasn’t necessarily been a guarantee this season. While Patrick Mahomes has generally been consistent (turnover issues not withstanding), other players have had off-weeks. It’s been feast or famine with receiver Tyreek Hill. Travis Kelce picked up just two points against the Philadelphia Eagles. And running back Clyde Edwards-Helaire sometimes seemed to disappear from the offense. Edwards-Helaire is now on injured reserve with a knee injury. Darrel Williams is set to take over the starting spot. Is...
NFL・1 DAY AGO
CBS Sports

Sam Darnold was always going to be a tough sell, in my opinion, as David Tepper's long-term quarterback solution. The Panthers uber-aggressive owner wants a top flight, elite starting QB; it's lost on no one within that organization or around the league, and it's always looked a long shot to me that Darnold was going to suffice.
NFL・4 DAYS AGO