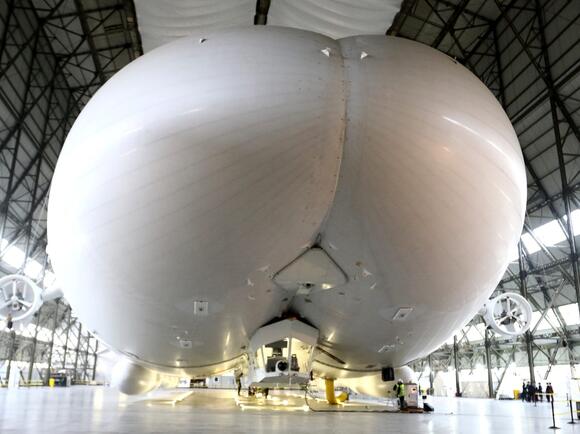 The Airlander 10 was recently subject to an internet meme treatment after a user tweeted a picture of the aircraft and its voluptuous posterior.

But the aircraft - aptly nicknamed "The Flying Bum" - is more than just a "thicc blimp," as per a Vice headline.

In 2025, the hybrid Airlander 10 will begin shutting up to 100 passengers in between cities at 10% of the emissions of a traditional aircraft, according to its maker Hybrid Air Vehicles (HAV).

By 2030, the company hopes to have an electric Airlander.

That's right. In a few years, you could be seeing an electric Flying Bum over your hometown. Wondering what riding in a curvaceous aircraft will be like? Riding in an Airlander 10 will be more similar to a ferry than an airplane, hence its in-house nickname "fast ferry," according to HAV. And unlike the typical passenger airplane, a lift in an Airlander 10 will be quieter, brighter, and more spacious. The Airlander will also have floor-to-ceiling windows for a panoramic view of the outside ... ... and on-board WiFi, a galley, a restroom, a bar, and in-flight entertainment. The drawback? Traveling by plane is faster than a flight aboard the Airlander 10, as shown in the graphic below. It should be noted that the below times factored in boarding and wait times - like check-in and security - that are typical in a travel routine. These additional times added an extra 95 and 80 minutes to the airplane and Airlander trips, respectively. But according to HAV, "speed is not the most important feature for our potential customers."

And unlike a plane, the Airlander 10 won't rely on airport terminals or traditional infrastructure. The aircraft can instead take off and land on an open and level space using its own terminals, which allows the Airlander 10 to access more remote places. When used as a means of regional passenger transportation, the Airlander will have a range of about 466 miles while hitting almost 81 mph.

… and can withstand both icy weather and lightning. Besides intercity transportation, the Airlander 10 can also be used for private "experiential" travel for up to three days … … logistical transport, data collection, communications, and military surveillance.

Hybrid Air Vehicles wants to have three Airlanders in the sky by 2023, Jack Guy reported for CNN ...

… gearing up for its first few passengers by 2025. Read the original article on Business Insider

right now everyone here make a pledge. first one of us with the opportunity to do so has to paint a thong on this thing.who's with me?

Am I the only one who thinks that’s a POV model of female ready for doggy?

Weird how the human brain works when you look at certain things!! 🤣 ( Y )

Airbus, the European air-transport giant, recently introduced its newest foray into the eVTOL world. The CityAirbus Next Gen follows the company’s single-seat, tilt-rotor Vahana and a first-generation ducted-fan multi-copter, also dubbed CityAirbus. The new vehicle is a four-seater, but looks sleeker, with six propellers mounted on a swept-back wing and two additional rear-thrust propellers on a V-shaped tail. It’s projected to hit a top speed of 75 mph with a range of 50 miles, both on the low end of performance specs in the category, which raised questions about Airbus’ vision. To get answers, we caught up with Joerg Mueller, the company’s...
AEROSPACE & DEFENSE・17 HOURS AGO
NBC News

PARIS — The world’s biggest triceratops skeleton, known as “Big John,” was sold for 6.6 million euros ($7.7 million) Thursday to a private collector at a Paris auction house. The enormous skeleton, estimated to be over 66 million years old, was found in 2014 in South Dakota. The triceratops is...
SOUTH DAKOTA STATE・1 HOUR AGO
LiveScience

In 2018, the largest active underwater eruption ever recorded birthed a giant "baby": a skyscraper-size underwater volcano, a new study finds. Scientists discovered the 2,690-foot-tall (820 meters) volcano in the western Indian Ocean, off Madagascar, following a puzzling spate of earthquakes that struck near what is normally a seismically quiet area. After collecting geological data, including information from a 2019 underwater survey of the region, the team realized that there was a new submarine volcano about 1.5 times the height of New York's One World Trade Center. What's more, this new "baby" draws from the deepest volcanic magma reservoir known to scientists.
SCIENCE・1 DAY AGO
Business Insider

Boeing was supposed to start flying astronauts for NASA 2 years ago. Now its glitching spaceship may not do so until 2023.

Boeing's Starliner spaceship has failed to reach the International Space Station twice. Now it likely has to wait at least a year to fly astronauts.
AEROSPACE & DEFENSE・2 DAYS AGO

Meet the Air One, the New Two-Person eVTOL You Can Park in Your Garage

Not every eVTOL maker is focused on building the first viable air taxi. There are some that just want to help you have some fun. Air, an aviation start-up based out of Israel, has just unveiled a two-person electric aircraft called the One designed for personal recreation. And, unlike other personal planes, you won’t need to rent out hangar space, as it has collapsible wings. The One is meant to be a “buy ‘n’ fly” aircraft meant for personal everyday use, according to New Atlas. It features a fixed-wing design and is propelled by eight rotors on two sets of pods positioned...
AEROSPACE & DEFENSE・2 DAYS AGO
FOXBusiness

United Airlines executives told investors Wednesday that customers should be wary of airlines that don't have vaccine requirements. During the third-quarter earnings call, the airline's executives, including CEO Scott Kirby, said that customers can "book with confidence" with United. The Chicago-based carrier has taken the strongest pro-vaccination stance among U.S....
INDUSTRY・19 HOURS AGO
Ars Technica

Ah, good old Berlin. While everyone else dithers and delays, unwittingly letting the climate crisis reach tipping point, citizens in the German capital are taking drastic action. A whopping 50,000 Berliners have signed a petition for a law to ban private cars from huge swathes of the city – paving the way for a greener, healthier, quieter and safer future.
TRAFFIC・10 DAYS AGO

Elon Musk is predicted to become the world's first trillionaire, thanks to SpaceX. Here's how the dual CEO went from getting bullied as a child to becoming one of the most successful and controversial men in tech.

Over the past five decades, Musk has launched multiple companies, become a tabloid figure, and taken the crown as the world's richest person.
AEROSPACE & DEFENSE・10 HOURS AGO
CNET

A fireball that blazed a slow trail across the skies above Michigan and other nearby states and provinces Tuesday night wasn't a meteor but instead a spacecraft making an unexpected homecoming. Dozens of photos, videos and eyewitness reports came pouring into the American Meteor Society from the Great Lakes region...
ASTRONOMY・9 HOURS AGO
Business Insider

Royal Caribbean is launching what it says is the world's longest cruise. It lasts 274 days, and prices start at $61,000.

NASA is putting out a call for more astronaut shuttles, expanding the Commercial Crew program with additional missions beyond those already agreed with SpaceX and Boeing. The request for “safe, reliable, and cost-effective human space transportation services to and from the International Space Station” comes as the US space agency looks ahead to the future of the ISS and, beyond … Continue reading
AEROSPACE & DEFENSE・15 HOURS AGO
Robb Report

The world may be one step closer to cleaner air travel thanks to Rolls-Royce. The company has just completed a successful test flight in a Boeing jumbo jet using 100 percent Sustainable Aviation Fuel (SAF). The 747 in question was equipped with a Trent 1000 turbofan engine running solely on unblended SAF while the remaining three RB211 mills used standard jet fuel, according to Rolls-Royce. Boeing was on hand to provide technical support, while World Energy provided the low-carbon fuel for the flight. The aircraft flew from Tuscon airport in Arizona across New Mexico and Texas, before arriving back at the airport...
AEROSPACE & DEFENSE・10 HOURS AGO
Robb Report

This Hybrid VTOL Concept Has a Bonkers Diamond-Shaped Wing Design

It’s hard to find a totally original concept in the eVTOL world. Since 2016, some 400 concepts, proposals and designs have been introduced to the world. Most of them are variations on one of a few themes. Only a handful of them will ever be built. All of which makes Craft Aero’s nine-seat, box-wing commuter vehicle stand out. As the video above shows, this thing is different. “The biggest difference is that our VTOL aircraft is designed for regional missions with a sweet-spot range of 100 to 700 miles, and cruise speed of 300 knots [345 mph],” James Dorris, CEO of...
AEROSPACE & DEFENSE・2 DAYS AGO
CNET

This story is part of Welcome to Mars, our series exploring the red planet. The rovers are back, Mars fans! After going quiet for a few weeks due to the Mars solar conjunction, NASA's red planet explorers are warming up to continue their missions. To celebrate, NASA released a Perseverance rover point-of-view video showing the wheeled vehicle going for a spin across Mars.
AEROSPACE & DEFENSE・1 DAY AGO
KXAN

The bizarre incident, which unfolded on a Delta Air Lines flight to New York City, was caught on camera and uploaded to TikTok over the weekend.
PUBLIC HEALTH・2 DAYS AGO
johnnyjet.com

What It’s Like Flying via Singapore, Doha and Traveling Around Thailand’s “No Quarantine” Sandbox

I travel to 20+ countries a year sharing my firsthand knowledge of reward travel, travel credit card deals, travel tips and more. Valerie Joy Wilson, an American solo travel expert, just returned from three weeks in Thailand. She fills us in on what it’s like traveling around Thailand’s “No Quarantine” Sandbox. She also shares her surprising experience flying via Singapore and Doha and the importance of travel insurance.
LIFESTYLE・8 DAYS AGO
techeblog.com

First Person View (FPV) drone racing is a popular sport nowadays, but flying one of these machines in a homemade cockpit takes things to a whole new level. To make this a reality, an R/C transmitter was disassembled for its gimbal and potentiometers. The gimbal was then equipped with a long stick for aileron and elevator control, while the potentiometers were hooked up to pedals for the rudder. Read more for a video and additional information.
ELECTRONICS・9 DAYS AGO
Business Insider

Airlines have been trying to scale up flights from the worst of the pandemic but Southwest's meltdown shows that airlines are still fragile.
VICTORVILLE, CA・10 DAYS AGO