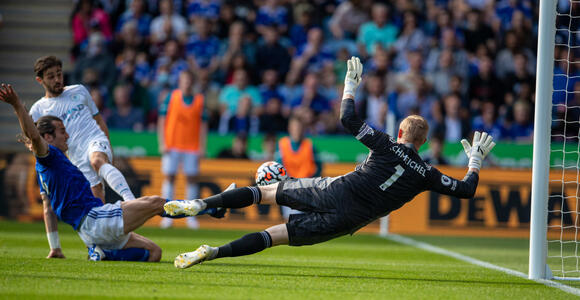 The Premier League champions made it three wins on the spin with a narrow win over the Foxes, who gave Pep Guardiola's side a run for their money with a resilient display at the King Power Stadium.

Despite enjoying a majority of possession for the first 45 minutes, Pep Guardiola's side struggled to find a way past a well-organised side, who beat City in the Community Shield in August.

Though a clever finish from Bernardo Silva just past the hour mark helped the Sky Blues to an important win in the east Midlands, Guardiola made a minor change in his side's attack against the FA Cup winners.

The Catalan boss decided to operate both Bernardo Silva and Jack Grealish on the left side of attack for a large chunk of the clash, which caused havoc among the Leicester defence at time during the tie.

“I like to have one or two players in the side who go to the natural side. So, when Jack Grealish plays right and Gundo (Ilkay Gundogan) plays right, every movement in behind is not on the proper foot, they have to turn," said the 50-year-old, as quoted by City's official website.

“The first action we had when Jack (Grealish) playing with Bernardo (Silva) - he dribbled and made a cross. Before, the winger the wingers always played, right footed, left side, left footed last side, but the last few years, we have had the tendency to have a right foot on the left and a left foot on the right.

“At least one or two of the three (in attack) need to be on the natural foot to be effective in the final third. They can play both sides, of course. Bernardo (Silva) prefers to play on the right, so it can happen."

However, Guardiola did go on to admit that Leicester caused his side their own share of problems in attack, as Jamie Vardy, who has a sensational scoring record against City, had a goal ruled out for offside in the second half.

“We suffered sometimes because they defend deep and use the counter-attack," added Guardiola.

“With (Kasper) Schmeichel, they have the quality to put the ball in the right spots, and after they make the movements with the full-backs, they move outside with (Jamie) Vardy in behind."

Guardiola joined City in 2016, following a trophy-laden three-year spell at Bayern Munich, and since arriving in the North-West of England, the Catalan has overseen the Sky Blues dominate the Premier League throughout his time in charge. Under the guidance of Pep Guardiola, Manchester City have won three Premier League...
PREMIER LEAGUE・14 DAYS AGO
CityXtra

After a positive but ultimately unsuccessful result against Paris Saint-Germain, it was important for Manchester City to bounce back and re-establish their place in Group A. Against Club Brugge, they did just that. With five goals and some thrilling individual displays, Pep Guardiola's team easily dispatched their Belgian opponents on...
PREMIER LEAGUE・7 DAYS AGO
CityXtra

The 26-year-old has struggled to nail down a place in Pep Guardiola's starting XI since the latter stages of the previous campaign, which has put doubts over his future at the club. Sterling, who currently earns around £300,000-per-week at the Etihad Stadium, was linked with a move away in the...
PREMIER LEAGUE・9 DAYS AGO
CityXtra

Reports have emerged that Rodgers would turn down advances from Newcastle United to be their next manager, owing to the Northern Irishman believing that he could be the man who replaces Pep Guardiola at Manchester City. Brendan Rodgers is one of the most highly regarded managers in the Premier League,...
PREMIER LEAGUE・13 DAYS AGO

Manchester City moved up to second in Group A after they thrashed Club Brugge 5-1 at the Jan Breydel Stadium in Belgium on Tuesday evening. After suffering a 2-0 loss to Paris Saint-Germain last month, Pep Guardiola's squad bounced back to winning ways with a superb victory against the Belgian Pro League side.
PREMIER LEAGUE・7 DAYS AGO
CityXtra

"We Spoke About that, About How He Has to Live" - Pep Guardiola Opens Up on Jack Grealish's Start to Life at Man City

Since signing for City in August for a record fee of £100 million, Grealish has had an up and down time fitting into his new role for the defending Premier League champions. The former Aston Villa star came flying out of the blocks, starting Manchester City's first five Premier League games - and while many of the club's signings take time to bed into life in Pep Guardiola's team, Grealish appears to have settled quickly.
PREMIER LEAGUE・8 DAYS AGO
CityXtra

The 27-year-old has made a blistering start to the season after major speculation surrounding his future at the Etihad Stadium in the summer, as several reports stated that he wanted to leave his current side. Since arriving to City from Monaco for £40 million in 2017, the Portugal international has...
PREMIER LEAGUE・6 DAYS AGO
newschain

Pep Guardiola has expressed surprise at comments from Raheem Sterling that he would consider leaving Manchester City. The City manager, however, admits he could understand why players would want more game time. Sterling, whose contract at the Etihad Stadium expires at the end of next season, said this week he...
PREMIER LEAGUE・12 DAYS AGO

Pep Guardiola sheds some light on the looming uncertainty regarding Manchester City winger Raheem Sterling. In England’s national team, Sterling boasts heavy minutes, often starting in every single marquee match. On the other hand, the winger’s minutes have recently diminished at City, opting for Guardiola to utilize other options on...
PREMIER LEAGUE・12 DAYS AGO
CityXtra

Just two points separate Pep Guardiola and Graham Potter's sides in the Premier League table ahead of the weekend meeting, with the Blues looking to avoid back-to-back defeats to the Seagulls for the first time. A stunning second-half comeback helped the South Coast side to an unexpected 3-2 win against...
PREMIER LEAGUE・5 DAYS AGO
The Independent

Pep Guardiola hailed Bernardo Silva as extraordinary after champions Manchester City claimed a comfortable 2-0 win over Burnley on Saturday.Silva, who was linked with a move away in the summer, has been in fine form in the opening months of the season and again stood out in an assured City display at the Etihad Stadium.The Portuguese scored the first of City’s goals after 12 minutes and had other opportunities in an impressive personal showing.Guardiola said: “He is in the best form, alongside Rodri. They have both played incredibly well in the last four or five games.“Bernardo is at the same...
PREMIER LEAGUE・11 DAYS AGO
CityXtra

So far this season, there's no doubting Bernardo Silva has been one of Manchester City's best performers. Becoming an ever-present in Pep Guardiola starting XI, the Portuguese international has earned high plaudits for his unbelievable technical quality and tireless work-rate off the ball. All of this comes just a few...
MANCHESTER, NY・6 DAYS AGO

Silva has been keen on an exit for the past two years, with the 27-year-old open to starting a new challenge as he has entered his fifth season in Manchester. The Portugal international has played a key role in his side's success under Pep Guardiola, with City claiming three Premier League titles amongst a host of domestic silverware under the Catalan boss.
PREMIER LEAGUE・9 DAYS AGO
FanSided

Manchester City, despite not having a proper number nine in their ranks have done well to challenge for the title thus far and are already being considered as one of the favourites to lift the Premier League title. City are currently sitting third in the points table and are only...
PREMIER LEAGUE・9 DAYS AGO
CityXtra

The Portugal international is in a rich vein of form since the start of the campaign, as he recently collected City's Player of the Month for September after a series of outstanding displays at the heart of midfield. After helping City reach their first-ever Champions League final last season, the...
PREMIER LEAGUE・5 DAYS AGO
punditarena.com

Pep Guardiola had plenty to say about Cole Palmer. Man City boss Pep Guardiola had nothing but praise for his teenage sensation Cole Palmer on Tuesday evening as City ran out easy 5-1 winners away to Club Brugge. City were totally dominant throughout the 90 minutes in Belgium, with Phil...
PREMIER LEAGUE・8 DAYS AGO
BBC

Riyad Mahrez scored twice and Cole Palmer got his first Champions League goal for Manchester City as Pep Guardiola's side put in a superb performance to sweep aside Belgian side Club Bruges. The visitors were slick and confident from start to finish as they moved to within one point of...
PREMIER LEAGUE・8 DAYS AGO
The Independent

Pep Guardiola has no intention of rushing teenager Cole Palmer following his outstanding cameo in Manchester City’s Champions League cakewalk in Bruges.The highly rated 19-year-old came off the bench and scored a classy goal as City eased to a 5-1 win over Club Brugge in their Group A clash at the Jan Breydel Stadium.It capped an impressive few days for the youngster, who briefly appeared against Burnley in the Premier League on Saturday before scoring a hat-trick for the under-21s side later that same day.Fans will undoubtedly now want to see more of the Wythenshawe-born youngster but, as with Phil...
PREMIER LEAGUE・8 DAYS AGO
CityXtra

The Premier League champions welcome the Clarets to the Etihad Stadium as they try and reduce the gap to the top of the table. Following Liverpool's emphatic 5-0 victory at Watford on Saturday, Pep Guardiola's side will be keen to return to winning ways after their 2-2 draw against Liverpool at the start of October.
PREMIER LEAGUE・11 DAYS AGO
chatsports.com

Club Brugge vs Manchester City LIVE: Pep Guardiola's men looking to climb back into knockout qualifying places in Group A with victory against undefeated Belgian outfit

Manchester City will be looking to climb back into the qualifying spots of the knockout stages of the Champions League when they travel to Club Brugge. Pep Guardiola's men suffered a 2-0 defeat at Paris Saint-Germain last time out following their nine-goal thriller against RB Leipzig, leaving them third in Group A as it stands.
UEFA・8 DAYS AGO