How does one get Meryl Streep, Jennifer Lawrence, Leonardo DiCaprio, and Jonah Hill in one room? The trailer for the Netflix original film "Don’t Look Up" has the answer to that very important question.

Although most people know Netflix primarily as a streaming platform, the company is proving itself as a production heavyweight. There have been several outstanding Netflix original films and series over the past few years.

Audiences were impressed to see Netflix’s “Marriage Story” get nominated for an academy award. Now it seems the production company is at it again with a star-studded dark comedy that is sure to rake up accolades.

Netflix recently released the trailer of its upcoming film, “Don’t Look Up,” and sent the world into a frenzy. The movie’s trailer offers the first glimpse at the unbelievable cast of A-listers involved in the production.

The Adam McKay-directed comedy has made headlines for the incredible cast list. Some of the biggest names in the film include Ariana Grande, Jennifer Lawrence, Meryl Streep, Jonah Hill, Leonardo DiCaprio, and Tyler Perry.

Perhaps, McKay’s film needs this much star power to explore the astronomy-related narrative of the movie. After all, the plot does follow two low-level astronomers who are tasked to save the Earth from an incoming comet. 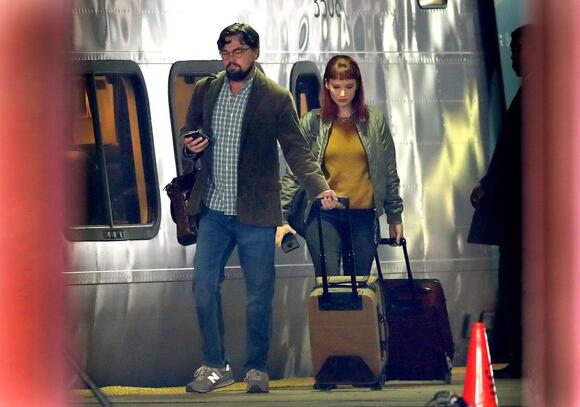 Lawrence and DiCaprio will partner up to play the astronomers, while Streep takes on the role of the president of the United States. DiCaprio recently opened up about the film’s story and why it is important:

“I knew when I read his script that it was incredibly unique, as it struck an important chord concerning the modern world we live in.”

McKay also opened up about the film and touched on what to expect from Streep’s character. He revealed that the president Streep would portray is more of a celebrity than a leader, referencing former politicians for her tone.

McKay’s vision for Streep is perfectly portrayed in the film’s trailer and does a fantastic job positioning Hill as her annoying spoilt son. The chaotic energy of a disaster movie is also demonstrated well in the teaser.

Thankfully, fans do not have to wait too long before they can see the star-studded extravaganza. “Don’t Look Up” will be available to watch in select theatres on December 10 and will be on Netflix from December 24.

After a pandemic-impacted year where the BFI London Film Festival was, like so many others, forced to scale back much of its offerings with very limited in-person events and almost zero international guests, Wednesday night saw the U.K.’s biggest cinema event roar back to life. The Royal Festival Hall, on the banks of the River Thames and a new setting after the festival shifted from its traditional base in Leicester Square, was the location for the grand 2021 revival and where Regina King, Idris Elba, Jonathan Majors, Regé-Jean Page, Ted Sarandos, Jay-Z and, according to reports (she ducked the photographers), Beyoncé,...
MOVIES・19 DAYS AGO
CinemaBlend

Lately, Jennifer Lopez has been at the forefront of celebrity news, thanks to her rekindled romance with with Ben Affleck. However, she also continues to make movies, and she's producing and starring in some exciting projects. The star recently partnered with Netflix to make films and shows through her production company, so we'll surely see a lot more projects from her. One of the most exciting of them has to be The Mother, and Netflix has dropped the first look at Lopez’s upcoming action movie.
CELEBRITIES・10 DAYS AGO
republic-online.com

Zendaya was dressed in a "bunch of stuff" from Target at her first movie premiere. The 'Dune' star felt "fly" in the pieces from the US budget superstore and insisted "that's all that matters". Asked what she would tell her teenage self at the time in an interview with the...
BEAUTY & FASHION・13 DAYS AGO
Popculture

Five years after its theatrical debut, one Kevin-Hart starring film is finding massive success on Netflix. Ride Along 2, the star-studded action comedy released back in 2016 as a sequel to 2014's Ride Along, is currently dominating the streaming charts in multiple countries across the globe, making the film one of the most popular titles on the platform worldwide at the moment.
CELEBRITIES・11 DAYS AGO

Here's a first look at 'The Munsters' reboot cast

"The Munsters" director Rob Zombie is giving fans a look at the cast of the reboot. Zombie took to Instagram to officially confirm that Jeff Daniel Phillips will play Herman Munster, Sheri Moon Zombie will be Lily Munster, and Dan Roebuck will be Grandpa Munster. He captioned a picture "Since...
MOVIES・8 DAYS AGO
IndieWire

Kristen Stewart has a self-deprecating approach to her career spanning more than 50 films, and that took flight with the release of the “Twilight” franchise. The actress, now an Oscar contender for her turn as Princess Diana in Pablo Larraín’s upcoming festival favorite “Spencer,” spoke to the Sunday Times (via Yahoo) about her body of work, which since breaking away from “Twilight” has long been revered by critics. (And there’s of course her legion of “Twilight” fans, too.) Stewart, who has starred in films from directors like David Fincher and Woody Allen, said that choosing roles can be a “total crapshoot.”...
MOVIES・1 DAY AGO
Insider

Neve Campbell, Courteney Cox and David Arquette are all back -- but will they survive the movie? In "Scream" (2022), Sidney Prescott returns to Woodsboro after a series of Ghostface attacks targeting teenagers with links to past franchise characters. The new sequel hits theaters January 14, 2022.
MOVIES・14 DAYS AGO
WSB Radio

“Scream” fans, rejoice: The official trailer for the fifth film in the popular horror franchise has arrived. According to E! News, Paramount Pictures on Tuesday released the preview of the new flick, set to hit theaters Jan. 14, 2022. “Twenty-five years after a streak of brutal murders shocked the quiet...
MOVIES・13 DAYS AGO
heyuguys.com

Netflix has debuted a number of first-look images on the upcoming feature ‘Munich – The Edge of War.’. Based on the international bestseller by Robert Harris. It is Autumn 1938 and Europe stands on the brink of war. Adolf Hitler is preparing to invade Czechoslovakia and Neville Chamberlain’s government desperately seeks a peaceful solution. With the pressure building, Hugh Legat, British civil servant, and Paul von Hartmann, German diplomat, travel to Munich for the emergency Conference. As negotiations begin, the two old friends find themselves at the centre of a web of political subterfuge and very real danger. With the whole world watching, can war be averted and, if so, at what cost?
BEHIND VIRAL VIDEOS・14 DAYS AGO
Deadline

“In life, you’ve gotta have ‘it,'” two-time Oscar winner Ben Affleck says in the first trailer for director George Clooney’s The Tender Bar, released by Amazon today. “If you don’t have ‘it, you’ll never get it—and I say you got it.”. Clooney’s follow-up to Netflix sci-fi pic The Midnight Sky...
MOVIES・12 DAYS AGO

Washington [US], October 15 (ANI): Popular streaming giant Netflix, on Thursday, released the first trailer for Oscar-winning actor Halle Berry's directorial debut 'Bruised', which will hit the streamer this November. Berry has directed and is starring in the sports drama about an MMA fighter (Jackie Justice) who reclaims her power,...
TV & VIDEOS・11 DAYS AGO
Escapist Magazine

DC FanDome just gave us the first trailer for the Ezra Miller-starring The Flash movie, but equally importantly, we get to see a tease of Michael Keaton returning as Batman. The video is hardly even a tease, clocking in at just around a minute long and only skirting around the fact that the movie will involve time travel. However, we do get a look at the Flash’s new suit in action, plus a handful of other characters. Check out the first trailer for The Flash below.
MOVIES・9 DAYS AGO
GeekTyrant

A new international trailer has hit the Internet for Marvel’s Eternals and it features a bit of new footage. Some of that footage specifically shows Thena (Angelina Jolie) and Gilgamesh (Don Lee) battling the villainous Deviants. The Eternals are “a race of immortal beings who lived on Earth and shaped...
MOVIES・11 DAYS AGO
TVGuide.com

The Sandman: Cast, First Looks, Release Date, and Everything to Know About Netflix's Adaptation

Many fans have long believed that Neil Gaiman's beloved graphic novel series The Sandman could never be adapted into live action, but leave it to Netflix to give it a try. The first issue of the series was published by DC in January 1989, and it ran through March 1996. Along the way, this dark and dazzling fantasy saga managed to hit the New York Times Bestseller list and influence a whole generation of comic book writers, artists, and readers.
TV & VIDEOS・8 DAYS AGO
arcamax.com

A Wes Anderson movie is recognizable from its first seconds; sitting down to one feels like spotting a friend in a crowd — a rare dream these days — and realizing how much you've missed them. "The French Dispatch," his latest, looks like so many of Anderson's previous films: the carefully composed shots with an actor centered in the middle; the softly faded colors (though much of his film is shot in artful black and white, or occasional playful animation); the familiar cast of players; the camera lingering on objects of nostalgia such as, in this case, typewriters. But Anderson isn't just resting on his long-established visual language here; he's playing with something new — the film equivalent of a magazine, as a way of paying tribute.
MOVIES・8 DAYS AGO
epicstream.com

Netflix's live-action adaptation of the popular anime series Cowboy Bebop is set to premiere in November, and now we know when exactly the first full trailer will drop. The news comes from the special short hyping Cowboy Bebop. The clip, which you can watch here, shows Spike, Faye, and Jet Black in action. Fans are loving the stylish clip, but expect to see more when the full trailer comes out.
TV SERIES・7 DAYS AGO