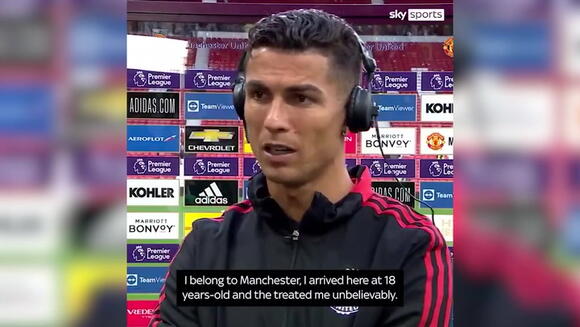 While Cristiano Ronaldo was giving a pre-match speech to the Manchester United squad on Friday night, Ole Gunnar Solskjaer was making his final preparations for the game. One of those decisions could end up much more complicated than a predictable win over Newcastle United.

Solskjaer went against his usual instinct, and put Paul Pogba in the central two.

The United manager would usually prefer not to play the French star there because he thinks he’s far more effective in a more attacking role, and has wondered whether he actually has the discipline for it.

It is why Solskjaer so often goes for the widely debated combination of Scott McTominay and Fred.

They were absent on Saturday, which forced the Norwegian’s hand, and perhaps raises questions over Pogba’s position in this squad – in more than one sense.

Solskjaer had little choice but to play the 28-year-old, and it was aided by the fact Newcastle are going to be one of the more supine sides that United play. If there are any games you can afford a more open midfield, it’s this one. Pogba was also typically superb with the ball in forward positions. One turn towards the end was glorious. That’s the kind of freedom Newcastle will allow.

Even allowing for that, though, Steve Bruce’s attackers just cut through United’s midfield in the way Wolves did.

Had they possessed even medium-class forwards, it could have been a very difficult day for United.

As it was, they more than got away with it. They had too much attacking quality.

That is one thing that remains so striking about this squad. It is so stacked in the forward positions. It is remarkable to think that Edinson Cavani and Marcus Rashford weren’t even on the bench. United have at least two high-class choices for every position, with Pogba himself capable of playing in an advanced role and out left.

That is in such a contrast to the midfield options, especially since Solskjaer doesn’t seem to trust Donny van de Beek there.

That may be why Pogba’s position is all the more interesting.

Given Ronaldo’s signing pushes everyone else one down the pecking order, and there will be pressure to get some attackers in for more forgiving games, it may see the French star in the centre much more.

That could bring the possibility for chaos – although at both ends. While it could make United more open, it may also make them more capable of opening the opposition.

That is also what makes Ronaldo all the more important.

His goals bring certainty, especially amid such chaos.

There are at least some signs that United are going back to a stage where it will become about scoring more than the opposition.

Ronaldo will ensure that happens more often than not.

“He senses the big moments, when to arrive in the box,” Solskjaer said. “I thought he played the game in a very, very mature way. He gave one ball away. But he was very efficient with his football.”

That may be essential if United suffer some inefficiency in midfield.

Jamie Carragher has delivered a damning assessment of Cristiano Ronaldo's return to Manchester United after claiming it has added to their problem of being a 'team of individuals' and further hampering their chances of winning the Premier League title. The Portuguese megastar has netted six goals in five appearances on...
PREMIER LEAGUE・12 DAYS AGO
International Business Times

Manchester United manager Ole Gunnar Solskjaer has been criticized because of his decision to bench Cristiano Ronaldo in the Everton match, but another manager came to his defense. Former Crystal Palace owner Simon Jordan spoke with talkSPORT in an exclusive interview and issued a statement in favor of Solskjaer's decision.
PREMIER LEAGUE・12 DAYS AGO
ClutchPoints

Sir Alex Ferguson shares a bold statement that Cristiano Ronaldo should have started in Manchester United’s 1-1 draw against Everton at Old Trafford. Old Trafford often welcomes celebrities as guests of their electric home games. Saturday’s game saw UFC legend Khabib Nurmagomedov and Former United manager Sir Alex Ferguson watching in the stands. Cameras were able to catch up on Ferguson’s conversation with the UFC legend, with Ferguson saying that:
PREMIER LEAGUE・12 DAYS AGO

In a surprising revelation, Gary Lineker has revealed that Cristiano Ronaldo's late move to Manchester United this summer was completed in his back garden - and he even took got a picture of the deal happening. It was confirmed at the end of August that United had reached an agreement...
PREMIER LEAGUE・11 DAYS AGO
Yardbarker

Paris Saint-Germain tried this summer to add a midfielder that is on par with the quality that Marco Verratti provides. One name that kept circulating all summer was Manchester United’s Paul Pogba. The 28-year-old had one year left on his contract, and the capital club has an excellent relationship with...
PREMIER LEAGUE・10 DAYS AGO
fourfourtwo.com

Manchester United want to have a final decision on Paul Pogba's future before the January transfer window opens, according to reports. The France international is out of contract next summer and has been linked with Real Madrid, PSG and Juventus. Reports last month suggested Pogba was now leaning towards staying...
PREMIER LEAGUE・14 DAYS AGO
firstsportz.com

Manchester United midfielder Paul Pogba has hinted to a possible move back to Juventus amid his ongoing uncertainty with the contract at Manchester United. Pogba made the switch to his boyhood club Manchester United from Juventus in 2016 for reported fee of £89 million. The 28 year old French international...
PREMIER LEAGUE・9 DAYS AGO

Paul Pogba was a significant part of France’s stunning comeback to beat Belgium 3-2 in a UEFA Nations League semifinal on Thursday. Kevin De Bruyne set up two goals including a Romelu Lukaku tally, but Kylian Mbappe had a goal and an assist before Theo Hernandez set up a final versus Spain with his 90th-minute winner.
PREMIER LEAGUE・10 DAYS AGO
BBC

Manchester United defender Luke Shaw has lauded Cristiano Ronaldo's impact after his return to Old Trafford. Ronaldo, 36, has scored five goals since re-signing from Juventus for £12.85m this summer. Shaw says the strength of his character has rubbed off on the dressing room. "You know the star he is,...
PREMIER LEAGUE・11 DAYS AGO
internetshots.com

Manchester United famous person Paul Pogba has opened up about the opportunity of rejoining Juventus as soon as his contract expires subsequent summer time. The Frenchman’s future at Outdated Trafford stays unclear and is underneath contract till June 2022. Pogba has not dedicated to a brand new cope with the...
PREMIER LEAGUE・9 DAYS AGO
The Independent

Manchester United midfielder Paul Pogba “always” speaks to his former Juventus teammates but insists he is focused on his current club.Pogba’s contract runs out at the end of this season and transfer rumours surrounding the star started this summer. His agent Mino Raiola has said the Italian club is still in Pogba’s heart but with Cristiano Ronaldo’s arrival at United, it’s thought the French international is interested in remaining at the Premier League club.“I always speak to my former Juventus team-mates, like Paulo (Dybala). I’m in Manchester, I’ve still got a contract there for a year and then we’ll see,”...
PREMIER LEAGUE・9 DAYS AGO

Paul Pogba 'is telling those close to him he wants to extend his Man United contract' in sign he will snub Real Madrid, PSG and Juventus to pen new long-term deal at Old Trafford that could be worth £400,000-a-week with Ronaldo's arrival a key factor

Paul Pogba 'is telling those close to him he wants to extend his Manchester United contract' amid interest in the French midfielder from Real Madrid, Juventus and Paris Saint-Germain. The 28-year-old's current deal at Old Trafford expires next summer and speculation has been rife as to his next destination for...
PREMIER LEAGUE・10 DAYS AGO
Yardbarker

Cristiano Ronaldo is claimed to be keen to be reunited with his former attacking team-mate Federico Chiesa with new club Manchester United. The pair formed a formidable partnership up front for the Old Lady previously, with the Italian’s passion and hard work, as well as his ability to thrive under pressure attracting him plenty of interest in recent years.
SOCCER・9 DAYS AGO
Yardbarker

Paul Pogba has offered Manchester United no assurances over his future, with the Frenchman’s contract due to expire at the end of the season. Pogba, who is ranked among the best midfield players on the planet, will be a free agent after June 30th 2022, as is reported by Transfermarkt.
PREMIER LEAGUE・9 DAYS AGO
ClutchPoints

Former undisputed UFC lightweight champion Khabib Nurmagomedov seemed to have spent quite a fun day with Cristiano Ronaldo and Manchester United at Old Trafford. On Saturday, Manchester United had a special guest at Old Trafford as UFC legend Khabib Nurmagomedov flew to England to watch the Red Devils take on Everton.
SOCCER・11 DAYS AGO
Yardbarker

Manchester United legend Paul Scholes has warned Paul Pogba that there’s not necessarily anywhere better to go at the moment amid doubts over his future. Pogba has often divided opinion in his time at Man Utd, but has started this season well and is surely worth keeping hold of given the club’s lack of other quality options in midfield.
PREMIER LEAGUE・7 DAYS AGO
The Independent

What the papers sayThe Daily Mail says Juventus are determined to bring Paul Pogba back to Italy, with the club prepared to use Aaron Ramsey as a bargaining chip to help the Manchester United midfielder. Ramsey’s exit at the end of the season is believed to be all but certain, with Juventus desperately in need of a cash boost to pursue Pogba, and the Wales international eager for a change of scenery.United forward Anthony Martial reportedly leads Newcastle’s wishlist of transfer targets. According to the Daily Mirror, United co-owner Joel Glazer is a huge fan of the France interntional, but...
PREMIER LEAGUE・6 DAYS AGO
fourfourtwo.com

Paul Pogba: Why Manchester United should let the Frenchman leave in the summer

Paul Pogba is set to leave Manchester United next summer, six years after returning to the club in a record transfer fee from Juventus. It's safe to say that the Frenchman's time back at the Theatre of Dreams has been somewhat mixed. Reports indicated that Pogba fell out spectacularly with the man who signed him, Jose Mourinho, during the pair's time at the club together; Ole Gunnar Solskjaer integrated him more successfully, though has used the World Cup winner in various roles while trying to find his best team.
PREMIER LEAGUE・6 DAYS AGO
Daily Mail

'It's a pleasure to play next to him': Paul Pogba hints he would like Man United to sign Monaco star Aurelien Tchouameni, admitting he 'always' wants to play with his French international team-mate

Manchester United star Paul Pogba has stated he 'always' wants to play 'by the side' of his French international team-mate Aurelien Tchouameni. The 21-year-old Monaco star is one of the most in-demand youngsters in Europe presently with the clubs including Real Madrid, Chelsea and Juventus all reportedly interested. Pogba started...
PREMIER LEAGUE・3 DAYS AGO