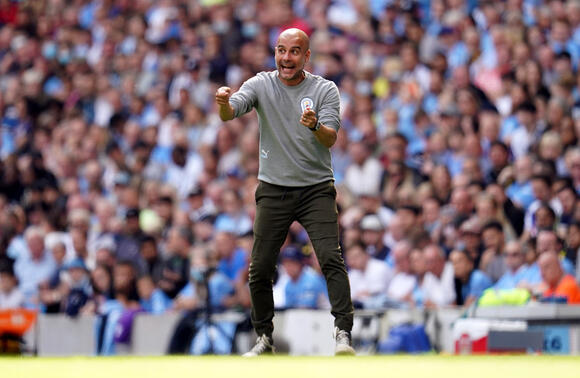 The Sky Blues sealed their third victory on the bounce at the King Power Stadium, with Bernardo Silva's goal just past the hour mark helping City claim a narrow win against the Foxes.

City have well and truly turned a corner after a drab start to the fresh campaign, with three wins on the spin after suffering consecutive 1-0 defeats at the hands of Leicester and Tottenham in the Community Shield and Premier League respectively.

After sealing a nard-fought victory over Brendan Rodgers's side, City boss Pep Guardiola provided his thoughts on his side's display against the FA Cup winners.

“We had the quality to put the ball in the right spots. Some moments were difficult, we knew it. We always suffer against Leicester City," said the 50-year-old in a post-match interview, as quoted by City's official website.

"It was the same in Community Shield (in August), we did a good game. Today was different, we were able to win.”

Guardiola was spotted expressing his frustrations at his side during the opening 45 minutes, as City failed to slice open the Leicester defence and handed the hosts a series of chances to test Ederson.

Aside from netting 11 times in their previous three appearances either side of the recent international break, City have not conceded a single goal in each of those victories.

Aymeric Laporte, who was heavily linked with an exit this summer, has returned to his best over the past month, and it remains to be seen if John Stones will be able to win his place back in the starting-XI.

With Phil Foden and Kevin De Bruyne getting closer to a return to action as well, Guardiola's side will receive a significant boost ahead of a jam-packed month, during which they play six times in the space of 17 days, including key trips away to Chelsea and Paris Saint-Germain.

PSG midfielder Marco Verratti is delighted with praise from Manchester City boss Pep Guardiola. Guardiola admits he's a big fan of Verratti after last week's Champions League defeat at PSG. In response, Verratti said: "These are certainly words that give pleasure. "He is a person who understands football, who is...
PREMIER LEAGUE・14 DAYS AGO
CityXtra

Reports have emerged that Rodgers would turn down advances from Newcastle United to be their next manager, owing to the Northern Irishman believing that he could be the man who replaces Pep Guardiola at Manchester City. Brendan Rodgers is one of the most highly regarded managers in the Premier League,...
PREMIER LEAGUE・10 DAYS AGO
The Independent

Pep Guardiola has expressed his surprise that Raheem Sterling would consider leaving Manchester City in search of regular playing time elsewhere.Sterling admitted that he would be “open” to leaving the Etihad having found himself out of favour under Guardiola since the second half of last season.The 26-year-old City contract is set to expire at the end of next season and negotiations over a renewal have stalled, with Sterling seeking guarantees over his game time.“I didn’t know [he had considered leaving], I think the club didn’t know it either” Guardiola said, when asked about Sterling’s remarks. “Raheem is our player, hopefuly...
PREMIER LEAGUE・9 DAYS AGO
CityXtra

The ongoing issues with the Premier League's South American stars and their trips back home for World Cup qualifiers is creating more problems than anticipated for the league's managers. With many of the countries red-listed for the UK, some players have had to quarantine for significant periods of time before...
PREMIER LEAGUE・9 DAYS AGO

Manchester United legend Roy Keane claims that Raheem Sterling has “obviously [had] some bust-up” with Manchester City manager Pep Guardiola. Sterling arrived at City in 2015 and has lifted three Premier League titles, four League Cups and an FA Cup during his time at the Etihad. The 26-year-old winger, who...
PREMIER LEAGUE・10 DAYS AGO
Tribal Football

Bayern Munich striker Robert Lewandowski has paid tribute to Manchester City boss Pep Guardiola. Lewandowski worked with Guardiola at Bayern. He told Marca: “Guardiola taught me to look at football differently. To understand movement, tactics, how to use it in the game. After working with him, I think differently in football, because I see football from the side, from a different angle.
PREMIER LEAGUE・12 DAYS AGO
Tribal Football

Manchester City boss Pep Guardiola insists he's happy with John Stones. tones has missed out on selection in recent weeks as Pep Guardiola has preferred Ruben Dias and Aymeric Laporte at the heart of his Manchester City defence, but the manager says the England defender is "fighting hard". "Aymeric has...
PREMIER LEAGUE・9 DAYS AGO

Manchester City boss Pep Guardiola insists Phil Foden has no set position at this stage in his career. Guardiola believes the versatile 20-year-old is capable of playing as an attacking midfielder, a winger or as a centre-forward, but has even suggested his ability and understanding of the game would allow him to perform in any position on the pitch.
PREMIER LEAGUE・9 DAYS AGO
ClutchPoints

Pep Guardiola sheds some light on the looming uncertainty regarding Manchester City winger Raheem Sterling. In England’s national team, Sterling boasts heavy minutes, often starting in every single marquee match. On the other hand, the winger’s minutes have recently diminished at City, opting for Guardiola to utilize other options on...
PREMIER LEAGUE・9 DAYS AGO
ClutchPoints

Man City manager Pep Guardiola fires back at Raheem Sterling’s recent comments regarding a possible transfer due to his contract issues with the club. Sterling has openly shared the possibility of signing to another club amid his lack of playing time for City this season. The English winger had a spectacular stint for his country in Euro 2020 but has had some difficulties consistently starting for his club.
PREMIER LEAGUE・9 DAYS AGO
Tribal Football

Manchester City manager Pep Guardiola has praised Cole Palmer after his goal against Club Brugge on Tuesday. The English teenager came on as a substitute and netted City's fourth goal in the 5-1 victory. "Cole has a special quality in front of the box, a talent that is difficult to...
PREMIER LEAGUE・5 DAYS AGO

Manchester City boss Pep Guardiola has heaped praise on versatile defender Nathan Ake. The Dutchman is a bit part player at City since arriving at the start of last season. However, Ake has shown a propensity to fill in at centre-back or left-back when necessary. Ake was outstanding for City...
PREMIER LEAGUE・7 DAYS AGO
World Soccer Talk

London (AFP) – Pep Guardiola says he wants Raheem Sterling to fight for his place at Manchester City after the frustrated forward admitted he “would be open” to leaving the Premier League champions. England forward Sterling has been with City since 2015, when he moved from Liverpool, and has won...
PREMIER LEAGUE・9 DAYS AGO
BBC

Manchester City manager Pep Guardiola is pleased to see his team get a win after the international break by beating Burnley 2-0. Watch Match of the Day on Saturday 16 October at 22:30 BST on BBC One, BBC iPlayer and the BBC Sport website and app.
PREMIER LEAGUE・8 DAYS AGO
chatsports.com

Pep Guardiola appears to have scored victory in his quest for five substitutions to be permitted in the remainder of the Carabao Cup. As Sportsmail revealed earlier this month, the Manchester City boss was instrumental in a campaign to increase the number of interchanges for the rest of the competition.
PREMIER LEAGUE・11 DAYS AGO
Tribal Football

Manchester City boss Pep Guardiola is set to win his fight to introduce more substitutes in the Carabao Cup. The Citizens coach prefers to significantly rotate his team for cup matches, and believes that limiting subs to only three in the League Cup is a mistake. According to the Daily...
PREMIER LEAGUE・11 DAYS AGO
BBC

Manchester City boss Pep Guardiola speaking to Match of the Day: "After the international break it’s always a little bit difficult to come to a rhythm and I know how good Burnley are. "They did really well, they have good players and we played a good 15-20 minutes in the...
PREMIER LEAGUE・8 DAYS AGO
Yardbarker

Guardiola joined City in 2016, following a trophy-laden three-year spell at Bayern Munich, and since arriving in the North-West of England, the Catalan has overseen the Sky Blues dominate the Premier League throughout his time in charge. Under the guidance of Pep Guardiola, Manchester City have won three Premier League...
PREMIER LEAGUE・11 DAYS AGO