AllSteelers is a FanNation channel covering the Pittsburgh Steelers 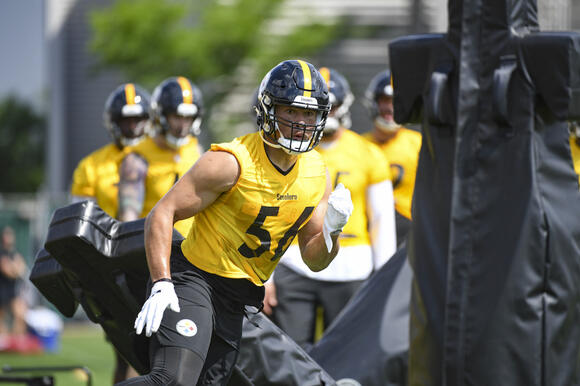 Highsmith was originally placed on the team's Injury Report with a questionable tag due to a groin injury. He was a full participant in the Steelers' Friday practice after missing Thursday.

The Steelers will also have T.J. Watt available for Week 1. Watt signed a five-year, $112 million contract on Friday but returned to practice Wednesday for the first time this season.

The Steelers will have a clean bill of health for Week 1, outside of Zach Banner, Anthony McFarland and Stephon Tuitt, who were placed on Injured Reserve. They're eligible to return after Week 3.

Can Steelers Beat Bills in Buffalo?

Some would argue the Ben Roethlisberger era in Pittsburgh not only should, but needs to come to an end. Steelers head coach Mike Tomlin disagrees. Roethlisberger, 35, has been wildly ineffective through four games this season. He’s completed 64.1 percent of his throws for 1,033 yards and four touchdowns with four picks. The stats don’t quite tell the full story, though.
NFL・17 DAYS AGO
102.5 WDVE

Here's what Aaron Rodgers said about rumors that he's interested in joining the Pittsburgh Steelers next season.
NFL・15 DAYS AGO
FanSided

3 quarterbacks the Steelers should replace Big Ben with

The Pittsburgh Steelers have a Ben Roethlisberger problem this season. Here are three quarterbacks that should replace the former two-time Super Bowl champion. The Pittsburgh Steelers were already making a risk in 2021 by bringing back quarterback Ben Roethlisberger for another season. Last year, there were signs that the two-time Super Bowl champion’s arm was no longer the same. Yet, they wanted to give it another go.
NFL・19 DAYS AGO
102.5 WDVE

Tomlin: Ben Roethlisberger Is Now Dealing With Another Injury

The 39-year-old quarterback was already dealing with a separate injury experienced in Week 2.
NFL・17 DAYS AGO

The Pittsburgh Steelers have found themselves in last place of the AFC North holding a 1-3 record on the season. Ben Roethlisberger doesn’t look like the franchise quarterback he used to be. It seems injuries and age have finally caught up to the 18-year veteran. It’s time to evaluate two possible Steelers quarterback replacements for the 2021 season.
NFL・16 DAYS AGO
The Spun

Cole Beasley Has Message For Bills Fans This Morning

Even as the Buffalo Bills rise to 3-1 on the season – taking a seemingly commanding two-win lead in the AFC East in the process – wide receiver Cole Beasley isn’t satisfied with the state of things. Namely, the way he feels he’s being treated by fans who reject his stance on vaccines.
NFL・18 DAYS AGO
Sports Illustrated

Check out odds, plays and more for the Pittsburgh Steelers vs. Seattle Seahawks NFL Week 6 matchup on October 17, 2021.
NFL・7 DAYS AGO
AllSteelers

PITTSBURGH -- The Pittsburgh Steelers saw multiple players return to practice as they begin preparation for Week 6 against the Seattle Seahawks. Cornerback Cam Sutton (groin) and linebacker Devin Bush (groin) were both full participants in Wednesday's practice. Sutton did not play in Week 6 and Bush left in the second half.
NFL・9 DAYS AGO

Steelers Among Teams That Can Afford Stephon Gilmore

The Pittsburgh Steelers are one of the NFL teams who have the resources to bring in free agent cornerback Stephon Gilmore, according to Over The Cap. OTC's Jason Fitzgerald published a breakdown of which teams "could afford" Gilmore after his release from the Patriots. The expectation is the 2019 Defensive Player of the Year will expect at least $15 million this season.
NFL・16 DAYS AGO
AllSteelers

Will Steelers Turnaround Start vs. Broncos?

The Pittsburgh Steelers' season is burning but the alarms aren't sounding yet. The Denver Broncos are headed to town and things might be looking up for the black and gold. Despite a terrible injury report, the Steelers are favored in Week 5. Can they pull it off? Can Ben Roethlisberger finish the game? Will Teddy Bridgewater start it?
NFL・14 DAYS AGO
AllSteelers

Pittsburgh Steelers wideout Diontae Johnson was on the receiving end of history on Sunday after catching a bomb down the left sideline for a touchdown against the Green Bay Packers. The third-year receiver caught his quarterback, Ben Roethlisberger's 400th career regular season touchdown pass. Johnson broke down the play for...
NFL・16 DAYS AGO
AllSteelers

PITTSBURGH -- Pittsburgh Steelers running back Anthony McFarland is returned to practice on Wednesday after missing the previous four weeks on Injured Reserve. McFarland was placed on IR with a knee injury prior to the Steelers' Week 1 matchup with the Buffalo Bills. He rushed for 54 yards and a touchdown in three games during the preseason.
NFL・16 DAYS AGO
AllSteelers

The Denver Broncos are dealing with injuries of their own, listing four starters questionable, including wide receiver Courtland Sutton, against the Pittsburgh Steelers. Sutton popped up on the Bronco's injury report on Friday after suffering an ankle injury. He joins quarterback Teddy Bridgewater (concussion), running back Melvin Gordon (lower leg), wide receiver Diontae Spencer (chest) and cornerback Patrick Surtain II (chest) with questionable tags for Sunday.
NFL・14 DAYS AGO
AllSteelers

Pittsburgh Steelers wide receiver JuJu Smith-Schuster underwent surgery on his dislocated shoulder on Wednesday, and afterwards, sent a heartfelt message to fans. "There's no other way to say it, but I'm heartbroken that I'm going to be out the rest of the season," Smith-Schuster wrote. "It kills me to have worked had all year to help our team on the field and now have my season cut short five weeks in. I'll do everything in my power to recover and I'll put in another full offseason of work next year to perform to the best of my abilities next season."
NFL・9 DAYS AGO
AllSteelers

During Thursday's NFL on FOX pregame show, insider Jay Glazer raised some eyebrows when discussing Seattle Seahawks quarterback Russell Wilson. Glazer said Wilson will "One million percent' request a trade - again - this offseason. "He also said in the piece to Erin [Andrews]—great piece, Erin—that it was 'blown out...
NFL・14 DAYS AGO
AllSteelers

Broncos Expected to Have Healthy RB Duo vs. Steelers

The Denver Broncos should have their starting running back in Week 5 against the Pittsburgh Steelers, according to ESPN's Jeremy Fowler. Melvin Gordon missed practice on Wednesday and was limited on Thursday with a lower leg injury. Despite the missed time, he's expected to play Sunday when the Broncos travel to Pittsburgh.
NFL・14 DAYS AGO
AllSteelers

Minutes before All Steelers published an article discussing the possible signing of Jaylon Smith, an even bigger name hit the open market - and hopefully the radar of the Pittsburgh Steelers. In stunning fashion, the New England Patriots released cornerback Stephon Gilmore. The 2019 Defensive Player of the Year is...
NFL・16 DAYS AGO
AllSteelers

Despite being taken to the hospital for a shoulder injury on Sunday, Pittsburgh Steelers wide receiver JuJu Smith-Schuster held a charity luau Monday night for his foundation. KDKA's Richie Walsh emceed the event and reported afterwards that Smith-Schuster is scheduled to undergo surgery on Wednesday for his right shoulder. Smith-Schuster...
NFL・10 DAYS AGO
AllSteelers

The Pittsburgh Steelers will square off against Denver Broncos quarterback Teddy Bridgewater in Week 5. According to ESPN's Adam Schefter, Bridgwater has cleared concussion protocol and will play at Heinz Field. Bridgewater was a full participant at practice on Friday but was limited in days before. He left Week 4...
NFL・12 DAYS AGO
AllSteelers

Sunday's matchup against the Denver Broncos will be the first time that the Pittsburgh Steelers will see Javonte Williams in a pro uniform. However, those within the Steelers organization are already very familiar with his abilities. Steelers Head Coach Mike Tomlin confirmed to the Denver media this week that the...
NFL・13 DAYS AGO

AllSteelers is a FanNation channel covering the Pittsburgh Steelers