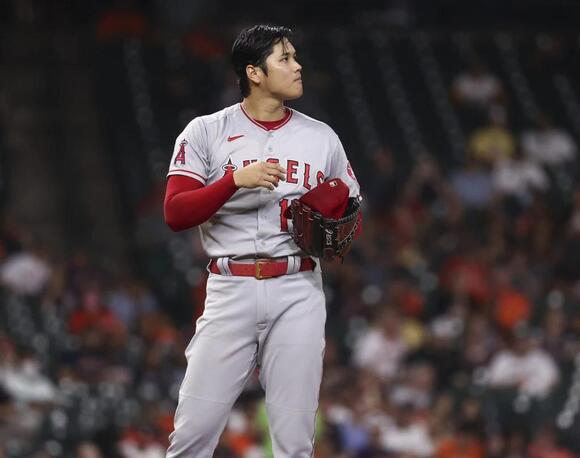 The Astros saddled Ohtani (9-2), the American League Most Valuable Player front-runner, with his first loss since May 28, a span of 13 starts and eight consecutive winning decisions. They erased a two-run deficit by plating three runs in the third inning before chasing Ohtani with a six-run fourth that featured 11 batters coming to the plate.

Bregman, Yordan Alvarez and Correa produced run-scoring, two-out hits in the third to push the Astros to a 3-2 lead. When Ohtani retook the mound in the fourth, he had a one-run advantage that vanished in the span of four batters, with Altuve plating Aledmys Diaz with an RBI single.

Altuve was the final batter Ohtani faced but he departed with two runners on base, both of whom scored when Bregman ripped a double to left field off Angels reliever Andrew Wantz.

Ohtani allowed six runs on a season-high nine hits and no walks with a season-low-tying one strikeout over 3 1/3 innings. In his prior appearance against the Astros on May 11, Ohtani surrendered one run on four hits and one walk while striking out 10 batters over seven innings.

Bregman gave Houston a 6-4 lead with his double and the onslaught concluded when Diaz delivered a bases-loaded single that drove in Alvarez and Correa and extended the lead to 9-4. 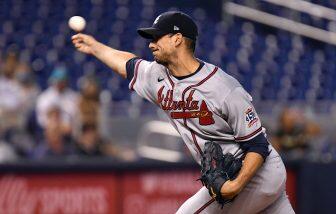 Altuve finished 3-for-4 and scored three runs while Bregman went 3-for-4 with four RBIs. Correa went 3-for-5 with an RBI and a run scored as the Astros banged out 16 hits, just three for extra bases.

Astros left-hander Framber Valdez (10-5) labored but lasted the requisite five innings to nab the victory. He surrendered solo home runs to Ohtani in the first inning and Jared Walsh in the second, his first homers allowed to left-handed batters this season. Ohtani smacked his league-leading 44th home run to right field; Walsh bashed his 26th home run to right-center.

Alvarez, Correa and Chas McCormick committed errors behind Valdez in the fifth, yet Valdez escaped that inning allowing only one run and departed with a four-run lead. He completed five innings with six hits, five runs (four earned), five walks and six strikeouts on his ledger. 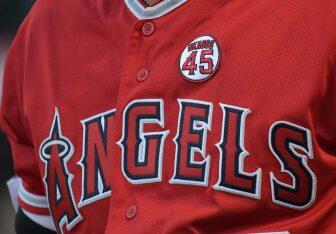 Shohei Ohtani recently put doubts on his future with the Los Angeles Angels after expressing his desire to win at the highest level. However, perhaps in a bid to stop the speculations from further spreading, he reiterated his love for the team. Per the Associated Press, Ohtani shared that he...
LOS ANGELES, CA・14 DAYS AGO
CBS Sports

Carlos Correa lifted little Anaiah Maldonado up high in the sweetest Astros celebration yet. (Photo by F. Carter Smith) Carlos Correa hugs Jose Altuve and in another moment he’s running for the stands to hug his wife Daniella and kiss her pregnant belly. If this is the heartbeat of the Houston Astros’ last clinching celebration with his guys — or just the first this year in another epic run to come — he’s going to enjoy every magic moment of it. They all are.
MLB・17 DAYS AGO
NJ.com

Carlos Correa is going to get paid. It’s just a matter of how much the two-time All-Star will be offered. Correa headlines a bumper crop of free-agent shortstops, which also includes the Los Angeles Dodgers’ Corey Seager, Colorado Rockies’ Trevor Story and New York Mets’ Javier Baez. So what will...
MLB・4 DAYS AGO

The Chicago White Sox were eliminated from the playoffs on Tuesday after losing Game 4 of their American League Division Series, 10-1, to the Houston Astros. The White Sox, specifically manager Tony La Russa, did not go quietly into the winter, however. Rather, La Russa made it clear that he...
MLB・4 DAYS AGO
CBS Sports

Correa isn't starting Saturday's game against the Athletics, Brian McTaggart of MLB.com reports. Correa will head to the bench after he went 4-for-12 with a homer, three runs, three RBI and two walks across the last four games. Aledmys Diaz will take his place at shortstop and bat seventh.
MLB・15 DAYS AGO
FanSided

The Houston Astros should be frustrated over how the Tampa Bay Rays’ incident involving Kevin Kiermaier was handled. If you ask MLB fans what comes to mind when they hear someone mention the Houston Astros, it’s likely something to do with the organization’s infamous sign-stealing scandal. Understandably so, the Astros won’t be able to live that down anytime soon.
MLB・25 DAYS AGO
USA TODAY

The Red Sox, thanks to J.D. Martinez and Rafael Devers, became the first team in MLB history to hit two grand slams during a single postseason game.
MLB・1 DAY AGO

Joe Maddon: Anyone other than Shohei Ohtani getting MVP vote is 'ridiculous'

Joe Maddon got to witness Shohei Ohtani’s incredible season up close. The Los Angeles Angels manager oversaw the team as Ohtani pitched and hit at All-Star levels. And he believes Ohtani should be the unanimous AL MVP. Maddon spoke with AM 830’s Roger Lodge for an interview on Monday and...
MLB・13 DAYS AGO
CBS Boston

By Michael Hurley, CBS Boston BOSTON (CBS) — Alex Cora was certainly guilty of participating in a sign-stealing scheme executed by the 2017 Houston Astros en route to their World Series championship. Then the bench coach of the Astros, Cora has admitted as much numerous times since MLB handed out punishment last April. Yet, the punishment was certainly distributed disproportionately. Despite MLB determining the operation was “player-driven and player-executed,” there were no players punished. Only Cora, then-manager A.J. Hinch, and then-GM Jeff Luhnow, were suspended after the investigation. The only player to suffer any consequences was Carlos Beltran, who had been named the...
MLB・2 DAYS AGO
Talon Marks

Off The Field: Shohei Ohtani is MVP bound

Shohei Ohtani has the MVP award in the bag and if another player is voted to win, it would be the biggest upset in the history of baseball. Ohtani was feasting all season on the pitching mound and in the batter’s box. Normally a player in the MLB is good at one position, but we are seeing a player excel in both.
MLB・10 DAYS AGO
NESN

Will Alex Verdugo Be Next Shohei Ohtani? Not On Alex Cora’s Watch

The Los Angeles Angels have become the envy of teams across Major League Baseball thanks to Shohei Ohtani — who this summer became the first player to be named an All-Star as a two-way player. Could the Boston Red Sox be next?. Outfielder Alex Verdugo told reporters Friday he wants...
MLB・9 DAYS AGO

Justin Verlander may not be able to help the Houston Astros in their quest for another World Series title, but the star pitcher had some advice for the team during the first game of the ALCS. Carlos Correa helped the Houston Astros come from behind to beat the Boston Red...
MLB・2 DAYS AGO
NESN

Nathan Eovaldi Didn’t Mince Words About His Feelings Toward Astros

There’s plenty of history — both on-field and off — between the Red Sox and the Houston Astros, and it’s all about to come to a head as the teams face off in the American League Championship Series. Naturally, Nathan Eovaldi has strong feelings toward his upcoming opponent. “I don’t...
MLB・4 DAYS AGO
FanSided

LA Angels‘ two-way sensation Shohei Ohtani had a season for the ages. He has picked up his first award in what should be an off-season of many accolades. Shohei Ohtani is the Baseball Digest and ebay Major League Baseball Player of the Year. Shohei Ohtani deserves the distinction after accomplishing...
MLB・9 DAYS AGO
lmu.edu

MILES WHITTINGHAM WRITES — Prior to the 2021 MLB season, Angels fans just wanted to see their star Shohei Ohtani stay healthy and produce what he could. But no one expected him to do what hadn’t been done in centuries. The Angels’ highly regarded two-way player has been the subject...
MLB・1 DAY AGO
numberfire.com

Houston Astros infielder Carlos Correa is not in the starting lineup for Saturday's game against the Oakland Athletics. Correa will move to the bench on Saturday with Yuli Gurriel starting at first base. Gurriel will bat fifth versus right-hander Paul Blackburn and the Athletics. numberFire's models project Gurriel for 9.2...
MLB・15 DAYS AGO
Larry Brown Sports

Shohei Ohtani had one of the most incredible seasons in MLB history this year, and there are likely many secrets to the Los Angeles Angels star’s success. David Ortiz says he knows one of them, and it has nothing to do with baseball. Ortiz and Alex Rodriguez discussed why Ohtani...
MLB・3 DAYS AGO
Sportsnaut

SEATTLE -- A week after saying winning is the “biggest thing” when it comes to deciding on his future with the Angels, Shohei Ohtani said Sunday that he’d be “very open” to negotiating a contract extension with the club this offseason. Ohtani, who is finishing up a historic season as...
MLB・14 DAYS AGO