Disney's remaining movies for 2021 will premiere exclusively in theatres for up to 45 days, following the 'Black Widow' furore 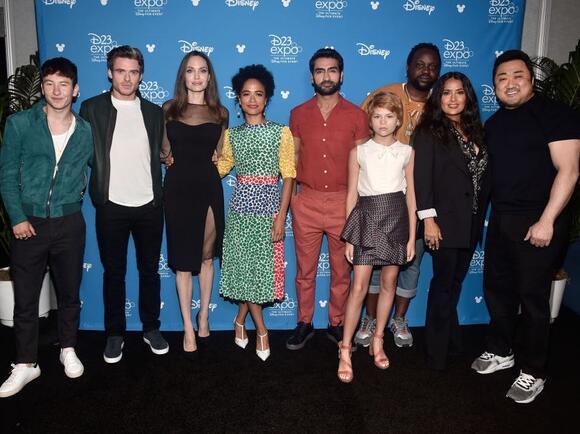 Disney plans to release the remainder of its 2021 movies exclusively in theatres, the company announced on Friday .

Most will be played in cinemas for more than a month before arriving on its Disney+ streaming platform.

The move follows the company's latest box-office success with Marvel's "Shang-Chi and the Legend of the Ten Rings," which was released only in theatres on September 3 .

The film broke the Labor Day weekend record , by pulling in a robust $94 million, according to Variety.

Disney said its animated musical fantasy "Encato" will be released in theatres before Thanksgiving, on November 24, and will play for 30 days. The movie, which includes music written by award-winning Hamilton composer Lin-Manuel Miranda, tells the story of a family who lives in a magical house in the mountains of Colombia.

Another five releases will play in theatres for at least 45 days, the company said. Marvel's "Eternals" is set for a November release, while Steven Spielberg's live-action musical "West Side Story" will debut in December.

Since the pandemic forced theatres across the country to close, Disney+ and other streaming services experimented by debuting movies at the same time online and in theaters.

The live-action Mulan remake had a dual release, as did "Wonder Woman 1984," and "Black Widow." The latter led to a lawsuit filed by its star, Scarlett Johansson , who claimed the move violated her contract.

"There is no merit whatsoever to this filing," a Disney spokesperson said . "The lawsuit is especially sad and distressing in its callous disregard for the horrific and prolonged global effects of the COVID-19 pandemic."

Disney previously reported that "Black Widow" made $158 million in its global box-office opening. It also said the movie grossed more than $60 million from Disney+ Premier Access purchases as part of its $218.8 million opening weekend haul .

With the Friday announcement, the company indicated confidence in audiences wanting to go back to theatres, despite the US grappling with a surge in cases driven by the Delta variant .

The Marvel Cinematic Universe has become a well-oiled machine over the last decade of filmmaking, but there are still some major roadblocks every so often. The most recent was Scarlett Johansson’s legal battle with Disney over the release of Black Widow, which has since been resolved. And now Avengers: Endgame co-director Joe Russo has broken his silence on ScarJo’s lawsuit.
MOVIES・9 DAYS AGO
Variety

Welcome to this week’s “Just for Variety.” Wonder Woman approves of Robert Pattinson as the new Batman and Zoë Kravitz as Catwoman! “Rob looks amazing,” Gal Gadot told me last night at Elle’s Women in Hollywood event at the Academy Museum when I asked if she had seen the new “The Batman” trailer. “I love his voice and I love the whole tone of everything. “And I love Zoë. She looks incredible. She’s a sweetheart. She’s a talented woman,” she continued. “And I’m so happy to have another female as a comrade.” So when does Gadot think we’ll see an all-female superhero movie with...
MOVIES・4 DAYS AGO
justjaredjr.com

Just announced – Maluma has a role in the upcoming animated Disney movie Encanto!. The 27-year-old Colombian singer is set to voice the Mariano, who is the town heartthrob, and the soon-to-be fiancé of the main character Mirabel’s sister Isabela. “Encanto is such a magical movie,” Maluma said in a...
MOVIES・3 DAYS AGO
411mania.com

Disney has renewed for a second season Argentine psychological drama “Limbo – Hasta Que Lo Decida,” one of the companies earliest Star Plus Originals in Latin America. The new order was announced this Saturday Oct. 9  by Leonardo Aranguibel, VP of production at the Walt Disney Company LatAm, in Cannes just after the world premiere of “Limbo” at Canneseries, where the 10-part series was the first to bow in main competition. The decision to order Season 2 was made given the results of the first 10 episodes, now in post-production, and selection for Canneseries, Aranguibel explained. Produced by Star Original Productions in partnership...
TV SERIES・15 DAYS AGO
WDW News Today

According to Deadline, a movie focusing on Walt Disney’s journey to create Disneyland is coming to Disney+. David Gordon Green will direct the film for Disney Studios. Evan Spiliotopoulos (“The Jungle Book 2,” “Pooh’s Heffalump Movie,” “Tinker Bell and the Lost Treasure”) will write the script. Cavalry Media pitched the...
TRAVEL・13 DAYS AGO
SuperHeroHype

Marvel’s Hawkeye Series Will Premiere With 2 Episodes on Disney+

Marvel’s Hawkeye Series Will Premiere With 2 Episodes on Disney+. To close out 2021, Disney+ has one more Marvel Studios series to debut: Hawkeye. For the first time, Jeremy Renner’s archer is headlining his own show. However, he won’t be alone. The new Hawkeye, Kate Bishop (Hailee Steinfeld), has entered Clint’s life, and she’s bringing a world of trouble with her. Fortunate, bad news for the Hawkeyes is great news for fans. Disney+ will debut the first two episodes of the series on Wednesday, November 24.
TV SERIES・10 DAYS AGO
COMICBOOKMOVIE.com

Ahead of the recent 4K Ultra HD and Blu-ray release of Marvel Studios' Black Widow, we were granted an exclusive opportunity to sit down with visual effects supervisor Matthew Giampa from Scanline VFX to talk about his team's stunning work on the Cate Shortland-directed blockbuster. Since Marvel Studios famously spreads...
MOVIES・11 DAYS AGO

Fornite‘s next big crossover involves the new Dune movie, which is set to hit theaters and the HBO Max streaming service in a couple of days. The movie’s two main characters have arrived on the battle royale island alongside related emotes and other goods, giving fans of both products the chance to bring the two together.
VIDEO GAMES・5 DAYS AGO
seattlepi.com

“There’s a lot of tension, just like there is in a lot of industries, because there’s a lot of disruption,” he said. “People’s nerves are fraying, and it’s hard to predict what’s going to happen or where anything is going.”. More from Variety. North Korea Blasts 'Squid Game' as Evidence...
MOVIES・10 DAYS AGO
WXIA 11 Alive

LOS ANGELES — The Walt Disney Co. is pushing back the release dates of many of its upcoming titles, including the untitled Indiana Jones movie and the Black Panther sequel “Wakanda Forever.”. The company said Monday that the fifth Indiana Jones, a James Mangold-directed and Steven Spielberg-produced installment which sees...
ENTERTAINMENT・6 DAYS AGO
MovieWeb

With box office numbers on the rise, more movies arriving on schedule and the likes of No Time To Die breaking box office records, you would think it was safe to say that the closures of last year are a thing of the past. However, Disney have put a spanner in the works of that rosy looking picture of a bright and normal future by announcing a mass delay on all of its upcoming Marvel movies beyond December's Spider-Man: No Way Home, starting with Doctor Strange in the Multiverse of Madness.
MOVIES・6 DAYS AGO