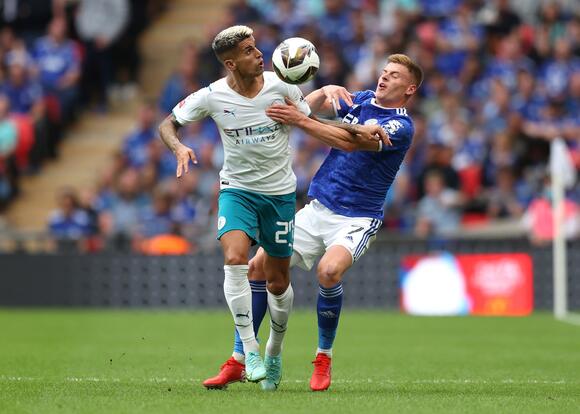 Leicester City will be aiming to replicate the result they dealt Manchester City in their Community Shield victory in August when they face off in the Premier League on Saturday.

So far in the league campaign they have won two and lost one to put them ninth and defeating City could see them move to the top four.

Brendan Rodgers’ side will be targeting Champions League qualification this season after just missing out last term and lifting the FA Cup.

They have proved they can win on big occasions, particularly in their 1-0 win over City in August , it’s just the consistency they need to get more results in the league.

Rodgers’ fight for points continues on Saturday against City and here is all you need to know about the Premier League fixture.

The match kicks off at 3pm on Saturday, 11 September.

The game is not available to watch live in the UK but highlights will be shown on Match of the Day on BBC One on Saturday evening at 10.40pm.

Despite City having many stars unavailable for the clash, their strength in depth will keep them in the mix. Leicester will have the slight edge, being at home, but the match will be quite evenly set. Don’t expect a high scoring game but this one is set to be thrilling. Leicester 1-1 City .

Team news and stats ahead of Man Utd Women vs Man City Women on Saturday; kick-off 1.30pm. Man Utd Women manager Marc Skinner said his squad is in good health but that he will be without full-back Martha Harris for a couple of weeks and Kirsty Smith - with both also likely to miss next week's game against Durham Women.
PREMIER LEAGUE・11 DAYS AGO
90min.com

Man City welcome Burnley to the Etihad Stadium this weekend as the Premier League resumes after the international break. The two sides lie at opposite ends of the table after seven games, with a winless Burnley travelling to a venue which hasn't been too kind to them over the years.
PREMIER LEAGUE・5 DAYS AGO
Yardbarker

Burnley have suffered 5-0 losses on their last four trips to the Etihad Stadium, with a bullish Blues side having scored at least five goals on four occasions already this season. Sean Dyche's team are winless in the Premier League so far this season, and having failed to beat Manchester...
PREMIER LEAGUE・4 DAYS AGO
90min.com

A winless Burnley travel to the Etihad Stadium to face champions Man City as the Premier League returns after the international break this weekend. Sean Dyche's side languish in the relegation zone after seven games, and they face fixtures against City, Chelsea and Tottenham in the space of the next month.
PREMIER LEAGUE・5 DAYS AGO

Manchester City vs Burnley preview: How to watch, team news, predicted line-ups and ones to watch

Burnley make the trip to Manchester City at the Etihad Stadium, with their recent record looming over their shoulders. The Clarets have a dreadful record over their opponents at The Etihad during the Sean Dyche era with the aggregate score in the last five visits in league and cup being 24-1 to the hosts.
PREMIER LEAGUE・4 DAYS AGO
The Independent

Brugge vs Man City prediction: How will Champions League fixture play out tonight?

Manchester City return to Champions League action this evening as last season’s defeated finalists travel to Belgium to face Club Brugge in Group A. Pep Guardiola’s side sit third in the standings after two rounds of matches following their opening win against RB Leipzig and defeat to Paris Saint-Germain last time out.FOLLOW LIVE: Brugge vs Man City – latest UCL updatesClub Brugge, meanwhile, come into tonight’s match one point ahead of City following their surprise draw against PSG at the Jan Breydel Stadium and victory over RB Leipzig in Germany. City beat Burnley 2-0 on Saturday thanks to goals from...
PREMIER LEAGUE・5 HOURS AGO
The Independent

Teenager Cole Palmer scored a classy goal and Riyad Mahrez struck twice as Manchester City ignited their Champions League campaign with a comfortable 5-1 win over Club BruggeFull-backs Joao Cancelo and Kyle Walker were also on target in a one-sided win in Belgium that strengthened City’s position in Group A after defeat to Paris St Germain three weeks ago.Hans Vanaken claimed a consolation for the hosts late on but City could have won more comfortably, with substitute Raheem Sterling spurning a couple of good opportunities.City’s victory was as dominant as they come and in 19-year-old academy product Palmer, they may...
UEFA・1 HOUR AGO
The Independent

Manchester City are in Belgium this evening to take on Club Brugge in the Champions League. City sit third in Group A with three points from their opening two games, having thrashed RB Leipzig before being beaten by Paris Saint-Germain, and Pep Guardiola will be urging his team to earn another win here before the group stage’s midway point.Brugge are second after drawing with PSG before beating Leipzig, and they are proving the surprise package of the group so far. The reigning Pro League champions are currently second in the Belgian table on goal difference behind Union Saint-Gilloise, and manager...
PREMIER LEAGUE・2 HOURS AGO

Wealdstone vs Solihull Moors preview: How to watch, team news, kick-off time, predicted line-ups and ones to watch

Wealdstone host Solihull Moors at Grosvenor Vale. For the first time ever, the Stones will host a Vanarama National League fixture on national television. The hosts sit in 16th place following a 5-0 defeat to Torquay United over the weekend and have won just twice in nine league matches this season while the Moors beat Southend United 2-0 to move up to eighth, one spot out of a play-off place.
SOCCER・12 DAYS AGO
The Independent

Spain will look to avenge their Euro 2020 semi-final defeat to Italy tonight when they play the European champions in the last four of the Uefa Nations League. Luis Enrique’s side were a penalty shootout away from joining England in the Euro 2020 final but Alvaro Morata and Dani Olmo missed their kicks as Italy won 4-2. The sides drew 1-1 in a thrilling semi-final at Wembley, but La Roja are missing a number of players who featured in that match, including Pedri, Morata, Olmo and Jordi Alba. Apart from a couple of absences in attack, Italy are at full...
SOCCER・13 DAYS AGO
The Independent

England will look to replicate last month’s thrashing of Hungary tonight as they welcome Marco Rossi’s team to Wembley Stadium in another World Cup qualifier.The Three Lions were 4-0 victors in Hungary in September, and with a 5-0 win away to Andorra at the weekend, Gareth Southgate’s side are in similar form now.FOLLOW LIVE: England vs Hungary – latest World Cup qualifier updatesIn that most recent outing, Jack Grealish and Ben Chilwell recorded their first goals for England, while Tammy Abraham, Bukayo Saka and James Ward-Prowse were also on the scoresheet.England lead Group I ahead of next winter’s World...
WORLD・7 DAYS AGO
SkySports

Team news, stats and prediction ahead of Aston Villa vs Wolves in the Premier League on Saturday; kick-off 3pm. Aston Villa duo Emi Martinez and Douglas Luiz will be assessed ahead of the visit of Wolves. Martinez played in Argentina's win over Peru on Friday, with Luiz coming off the...
PREMIER LEAGUE・6 DAYS AGO

For a select few desperate to cling to elite status, the halfway mark of the group stage brings about potential inflection points in their respective seasons.
UEFA・1 DAY AGO
FanSided

Southampton host Leeds this weekend and will be looking to spark a run of positive results to lift themselves up the Premier League table. Ralph Hasenhuttl’s side sit in 17th position and will be targeting a good number of points from their next five matches that see them take on teams around them.
PREMIER LEAGUE・5 DAYS AGO
MassLive.com

It’s Manchester United vs. Leicester City Saturday in a 2021 English Premier League matchup where one team is gunning for the top spot while another is looking to get back into the mix. Cristiano Ronaldo and Manchester United tp break out of a slump against English clubs, having 0-1-1- in their last two EPL matchups as well as losing to West Hampton in the 2021 Carabao Cup. On the other side, Leicester City has fallen below expectations this season, sitting in 13th place with a record of 2-2-3 through seven matches.
LEICESTER, MA・3 DAYS AGO
FanSided

Leicester City host Manchester United at the King Power stadium on 16th October 2021. Here is the injury news and expected starting XI’s. Foxes’ supporters will be hoping the King Power side can reignite their former form when they face top side Manchester United on Saturday. From a trough of form, Brendan Rodgers needs to get the side firing to have any chance.
PREMIER LEAGUE・5 DAYS AGO
FanSided

Looking ahead to Leicester City vs Manchester United

As the international break comes to a welcome end, we can now turn our attention to the return of Premier League football this weekend. Brendan Rodgers’ Leicester City host Ole Gunnar Solskjær’s Manchester United on Saturday with both sides in desperate need of a victory to spark their respective seasons into life.
PREMIER LEAGUE・6 DAYS AGO
Sunderland Echo

The Black Cats will welcome Manchester United’s under-21 side to the Stadium of Light and will progress to the knockout stages of the competition with a win. Sunderland beat Lincoln 2-1 last week after naming a starting XI which included a mixture of first-team and under-23s players. We are expecting...
PREMIER LEAGUE・6 DAYS AGO
SB Nation

Watford will be without Francisco Sierralta and Christian Kabasele, who both picked up injured hamstrings against Leeds, and both Nicolas Nkoulou and Peter Etebo remain sidelined as well. Josh King is still a doubt, but could feature following a late assessment ahead of the game Saturday. Claudio Ranieri has said...
PREMIER LEAGUE・4 DAYS AGO