If Republicans Win in 2022, Investigations, Impeachment 25th Amendment Could Be Used Against Biden 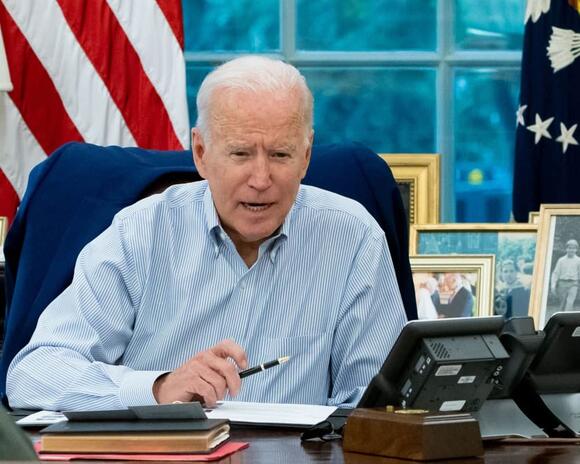 With recent declines in President Joe Biden’s polling numbers, Republicans are optimistic about their chances in the 2022 elections

Republicans have been feeling so good lately about their chances next year that they are already talking about what they will do if they take over the U.S. House and the U.S. Senate.

Several Republicans are calling for full investigations over the Afghanistan withdrawal debacle.

One of those is U.S. Sen. Rick Scott, R-Fla.. He told WBOB Talk Radio in Jacksonville that investigations should start immediately.

“This chaos created by Biden’s misguided and dangerous actions and decisions has led to the loss of 13 American service members and it’s time to launch a much-needed bipartisan investigation, it’s time to get answers,” said Scott.

Scott has also opened the door to using the 25th Amendment against Biden.

“Is Joe Biden capable of discharging the duties of his office or has time come to exercise the provisions of the 25th Amendment?” Scott asked on social media.

More calls for resignation and even impeachment are also on the table.

U.S. Rep. Byron Donald, R-Fla., said that Biden should “resign immediately” following the Afghanistan withdrawal and he has been joined by other Republicans in Congress including U.S. Rep. Kat Cammack, R-Fla.

Over in the upper chamber, U.S. Sen. Lindsey Graham, R-SC, said he supports impeaching Biden but U.S. Senate Minority Leader Mitch McConnell, R-Ky., has pushed back on that idea.

GOP strategist and campaign adviser Scott Jennings said that Democrats opened a “Pandora’s box” during the Trump years and the GOP is “engaging in the behavior that they’ve been taught by Democrats.”

Besides Afghanistan, Republicans also have their sights over the chaos at the border during Biden’s time in the White House. One GOP consultant told Florida Daily that the comments Republicans make about removing Biden are political rhetoric that plays well with the GOP base.

We want those traders out of "Our Whitehouse"! We The People Demand It! We are sick of there Hitler ways!!! They are following in the Natzi footsteps! This is the way of HITLER!!! THE LOT OF THEM SHOULD BE TRIED FOR TREASON !!!

Impeach Biden and Ms. Chuckles. Say what you will about the last administration, but at least gas was cheaper, groceries were cheaper, and we didn't have a tidal wave of people at the border.

as bad as the first eight months of his illegitimate president see has been, he should be impeached before 2022. Come on man grow a brain and put them in the past

Last week, U.S. Rep. Chris Jacobs, R-NY, led more than four dozen Republicans in the U.S. House in sending a letter to the Social Security Administration and the American Federation of Government Employees, calling on them to come up with a plan to reopen more than 1,500 Social Security offices across the country.
FLORIDA STATE・2 HOURS AGO
FloridaDaily

Floridians are no strangers to close elections. From 2000’s cliffhanger presidential race to the 2018 U.S. Senate recount, Florida has been home to some of the nation’s closest election contests. But that’s starting to change. In 2020, President Trump carried the Sunshine State by more than 365,000 votes. As we...
FLORIDA STATE・3 DAYS AGO

This week, U.S. Sen. Marco Rubio, R-Fla., showcased his support of U.S. Sen. Ted Cruz’s, R-Texas, proposal to “disrupt illicit gold mining and trafficking of other precious metals that are commonly used to fund terrorist groups and rogue regimes.”. Cruz introduced the bill last week and he and co-sponsors like...
CONGRESS & COURTS・3 DAYS AGO
FloridaDaily

This week, U.S. Sen. Marco Rubio, R-Fla., requested an update from U.S. Secretary of Commerce Gina Raimondo after the department reached its own deadline to provide the White House a report with recommendations to protect Americans’ data from foreign adversaries. On June 9, 2021, President Joe Biden issued Executive Order...
CONGRESS & COURTS・4 DAYS AGO
FloridaDaily

Inside the massive spending bill being pushed by Democrats on Capitol Hill is a proposal that would carve out $1.3 billion in tax credits for local newspapers with up to 750 employees.The proposal would allow a payroll tax credit for journalists of up to $12,500 in wages per employee per quarter or equal to 50 percent of the salary of each journalist, up to $50,000 per journalist annually. Under the proposal, if advertising is slow, the federal government will also provide newspapers tax credits to keep the company afloat.
CONGRESS & COURTS・5 DAYS AGO

Last week, U.S. Rep. Dan Webster, R-Fla., and U.S. Rep. Lisa McClain, R-Mich., led more than 50 Republicans in the U.S. House in sending a letter to U.S. Attorney General Merrick Garland “demanding answers on why the Department of Justice (DOJ) is targeting parents who speak out in opposition to school board decisions.”
CONGRESS & COURTS・5 DAYS AGO
FloridaDaily

This week, two members of the Florida congressional delegation–Republican U.S. Reps. Dan Webster and Neal Dunn–led a letter to key federal officials, including Dr. Anthony Fauci from the National Institutes of Health (NIH), calling on them “ to recognize the overwhelming data and evidence that COVID-19 natural immunity confers protection at least equal to that from vaccination.”
FLORIDA STATE・4 DAYS AGO
FloridaDaily

This week, U.S. Rep. Gus Bilirakis, R-Fla., showcased his “ Protecting the Integrity of our Biomedical Research Act.”. Bilirakis introduced the bill which “would require disclosure of any current or prior participation in a foreign talent program as a condition of receiving federal extramural research funding awarded through the National Institutes of Health (NIH)” last week.
CONGRESS & COURTS・5 DAYS AGO
FloridaDaily

Some Conservatives Think Trump, GOP Should Move On From 2020 and Focus on Biden

Over the last several months, polls have shown that most Republicans believe the 2020 election was stolen from former President Donald Trump. However, in states like Arizona and Georgia that have conducted election audits, the outcome shows President Joe Biden still won. But as Trump travels throughout the country and...
PRESIDENTIAL ELECTION・10 DAYS AGO
FloridaDaily

Last week, U.S. Sen. Marco Rubio, R-Fla., and two members of the Florida delegation in the U.S. House unveiled their proposal “to require the U.S. Department of Housing and Urban Development (HUD) to provide a disclosure notice to potential homebuyers if the HUD listed properties are located in a flood zone and are considered a Repetitive Loss property according to the National Flood Insurance Program (NFIP).”
CONGRESS & COURTS・6 DAYS AGO
FloridaDaily

U.S. Rep. Gus Bilirakis, R-Fla., the top Republican on the U.S. House Consumers Protection and Commerce Subcommittee, is backing a proposal “to combat the online sale of stolen, counterfeit, and dangerous consumer products.”. U.S. Rep. Jan Schakowsky, D-Ill., the chairwoman of the subcommittee, introduced the “Integrity, Notification, and Fairness in...
CONGRESS & COURTS・7 DAYS AGO
FloridaDaily

Rick Scott Wants a Committee to Investigate Withdrawal of U.S. Forces From Afghanistan

This week, U.S. Sen. Rick Scott, R-Fla., introduced a resolution to create “a bipartisan Joint Select Committee on Afghanistan, composed of members of the House and Senate, to conduct a full investigation into President Biden’s failed and tragic withdrawal of U.S. forces from Afghanistan that stranded hundreds of Americans behind enemy lines, left billions of dollars in U.S. military equipment in the hands of terrorists and took the lives of 13 brave U.S. service members.”
CONGRESS & COURTS・12 DAYS AGO
FloridaDaily

This week, U.S. Rep. Debbie Wasserman Schultz, D-Fla., showcased her “School Shooting Safety and Preparedness Act” which “will allow the public and policy makers to gain a complete and accurate picture of gun violence in and around our school campuses, and provide actionable data to build effective strategies to prevent bloodshed at America’s places of learning.”
CONGRESS & COURTS・12 DAYS AGO