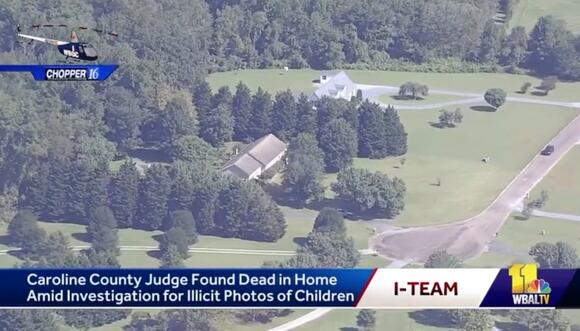 A judge killed himself moments before he was to have been arrested on allegations he had a hidden camera that captured images of naked boys in his bathroom .

Jonathan Newell, 50, had been on leave from his role as a circuit judge in Maryland ’s Caroline County since July after allegations were made against him.

When FBI agents arrived at his home in Henderson, Maryland, on Friday morning to arrest him on a federal criminal complaint they found him “suffering from an apparent self-inflicted gunshot wound.”

The Maryland US Attorney’s Office confirmed that the judge had been pronounced dead at 6.43am.

“Maryland State Police will lead the investigation into the apparent suicide,” prosecutors said in  a statement.

A neighbour, Kimberly Keith, posted on Facebook that FBI agents had been stationed outside the judge’s home, demanding over a loudspeaker for him to come out.

She stated that gunshots had been heard and an ambulance arrived shortly after.

Prosecutors were set to charge Mr Newell on federal charges of exploitation of a child.

The criminal complaint, which was unsealed on Friday, stated that Maryland State Police had been called in July after a minor boy claimed to have found the video camera in the bathroom of the judge’s cabin.

Investigators interviewed two boys, both minors, who said they had found the hidden camera as they “spent the night” at the cabin with Mr Newell.

One of the boys told investigators that he was undressing in the bathroom when he saw that the camera was on and facing the shower in a corner of the room. 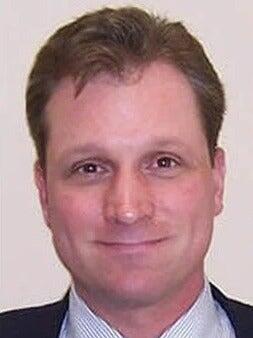 The boys reported the incident to their parents, who contacted law enforcement, the complaint states.

Mr Newell denied knowing anything about the camera, and said that another adult male and four boys had used the cabin the day before.

But when being interviewed, Mr Newell allegedly chewed and swallowed a camera memory card, and a CT scan later showed he had ingested a foreign object, according to the complaint.

When authorities carried out searches of Mr Newell’s cabin, home and office they seized multiple digital devices, including a hard drive they allege contained multiple videos of young men showering, dating back to September 2014.

Mr Newell, a Republican, was appointed as a judge by Maryland Governor Larry Hogan in 2016, and started a 15-year term in 2018.

I love it when the trash takes itself out!... God help all kids that deal with abominable nastiness! in Jesus name amen🙏❤💛🖤💟🙏⚖🙏❗❗❗

Why were parents letting their kids hang out with this man? I don't see anything about him having kids or a spouse. I'm just saying...

"I like to think that the last thing that went through his head, other than that bullet, was just how Andy Dufrane ever got the best of him." (Morgan Freeman voice)

DENVER (CBS4) – Denver police investigators say Charles Porter shot someone after an argument on North Quince Street on Oct. 14. That victim later died at the hospital. Charles Porter (credit: Denver Police) Porter faced a judge on Sunday morning. He is now on a no bond hold facing a first degree murder charge. The judge also implemented a protection order against harassment of witnesses and victims. Officers responded to the area near 7th Avenue and Quince Street at around 10 p.m. on Oct. 14. They say Porter and the victim first started arguing about something, and the argument escalated into a physical fight. Investigators say Porter pulled out a firearm and shot the victim. That victim’s identity has not been released.
DENVER, CO・28 MINUTES AGO
CrimeOnline

Cops said the couple kissed and put their heads against each other before the boyfriend fired the gun against his girlfriend’s temple. Florida police have identified the couple who reportedly attempted to carry out a suicide pact last week which left a woman dead and her boyfriend hospitalized. Holly Hill...
RELATIONSHIPS・3 DAYS AGO
WashingtonExaminer

A member of one of the most famous gangs in the United States was sentenced to 40 years in prison on Tuesday for his role as an enforcer, which included shooting a minor in the chest twice for interrupting the filming of a gang rap video. He's the last defendant in a case against the Gangster Disciples, the Justice Department announced on Thursday.
ENTERTAINMENT・3 DAYS AGO
lawofficer.com

WARNER ROBINS, Ga. — Law enforcement authorities in Warner Robins, Georgia on Wednesday identified a dead woman who was accused of engaging in an armed robbery of two men inside a vehicle. The deceased suspect was reportedly shot and killed as one of the victims wrestled for control of the firearm during the crime. A second female suspect was arrested following the deadly encounter.
WARNER ROBINS, GA・4 DAYS AGO

PITTSBURGH (KDKA) — The man charged with the death of a postal worker appeared in front of a federal judge. Eric Kortz had his preliminary hearing on Tuesday. Kortz appeared from the Allegheny County Jail in the virtual hearing. His lawyer asked the judge to drop all charges. He argued...
PITTSBURGH, PA・5 DAYS AGO
Tv20detroit.com

(WXYZ) — A Ferndale pastor is in jail after police say he tried to kill two Arenac County sheriff's deputies with his car. The terrifying ordeal happened Wednesday just off of I-75 near the Alger exit. The pastor's name is David Jones, and according to the Hilton Oaks Baptist Church...
FERNDALE, MI・6 DAYS AGO
erienewsnow.com

Murder Suspect in Warren Native's Death Kills Himself During Arrest

There are new developments in the murder of Warren county native, Alexis Robinault-Sharkey. She had moved to Texas, and was found dead in November of last year. Wednesday, we learned her husband, Thomas Sharkey, was wanted in her murder. And as U.S. Marshals tried to arrest him Tuesday night in...
WARREN COUNTY, PA・10 DAYS AGO
WashingtonExaminer

The husband of deceased Instagram influencer Alexis Sharkey killed himself on Tuesday, just before authorities attempted to arrest him in Florida, officials announced.
HOUSTON, TX・9 DAYS AGO

Alexis Sharkey's husband, wanted in her death, kills himself as authorities were about to arrest him

HOUSTON, Texas (KTRK) -- Nearly a year has gone by since Alexis Sharkey, a Houston woman known for her Instagram presence and following, was found dead on the side of a west Houston road just after Thanksgiving in 2020. Since then, investigators haven't disclosed information on arrests or suspects in...
HOUSTON, TX・11 DAYS AGO
Fox News

Woman raped on train as bystanders did nothing, police say

A woman was raped by a stranger on a commuter train in suburban Philadelphia in the presence of other riders who a police official said "should have done something." Superintendent Timothy Bernhardt of the Upper Darby Police Department said officers were called to the 69th Street terminal around 10 p.m. Wednesday after the assault on the westbound train on the Market-Frankford Line.
PHILADELPHIA, PA・1 DAY AGO
The Independent

A former Nasa executive who was feuding with his next-door neighbours has been found guilty of murdering one of them in what prosecutors described as “an execution”.Michael Hetle, 54, claimed he acted in self-defence when he rapidly fired seven shots into 24-year-old Javon Prather on his doorstep in March 2020 following a mundane fight earlier in the day, saying he believed the younger man was armed.But a jury in Fairfax, Virginia rejected that argument after watching video from a Ring doorbell camera showing the former police officer opening his door and immediately shooting the unarmed Prather at point-blank range...
PUBLIC SAFETY・1 DAY AGO
WRAL News

Zebulon man accused of killing roommate called 911 on himself

Zebulon, N.C. — A man accused of killing his roommate turned himself in to police Tuesday night, police say. Around 10:15 p.m., officers responded to a home on Braemar Highlands Drive, where they found Chauncy Kassim Montague, 35, in the front yard with gunshot wounds. Montague was taken to a local hospital, where he died.
ZEBULON, NC・4 DAYS AGO

Tennessee man allegedly lit girlfriend on fire for breaking up with him, police say

A man lit his girlfriend on fire after she tried to break up with him, police said. Kenneth Upshaw is charged with attempted second-degree murder and is awaiting his first court appearance. Memphis police responded to a domestic violence burn victim at Regional Med Hospital on Saturday, according to a...
TENNESSEE STATE・2 DAYS AGO
ABC15 Arizona

The family responsible for shooting the accused deputy-killer, Clinton Hurley, is sharing their story about the tense confrontation with the suspect.
MARICOPA COUNTY, AZ・5 DAYS AGO
Denver7 News KMGH

Slain Longmont postal carrier was in custody battle with woman accused of killing him, docs show

The Longmont postal carrier who was shot and killed Wednesday was in the midst of a custody battle with his ex-girlfriend, who was arrested and accused of killing him, according to court documents.
LONGMONT, CO・2 DAYS AGO
KKTV

PUEBLO, Colo. (KKTV) - A man suspected of murder in Pueblo was recently arrested in New Mexico. Pueblo Police shared an update on the case against Nicholas Tumblin on Thursday. Tumblin was arrested by U.S. Marshals on Wednesday for a shooting that happened in Pueblo on Sept. 27. Police were...
PUEBLO, CO・9 DAYS AGO

Houston police confirmed that Thomas Sharkey's body was found with a self-inflicted gunshot by the U.S. Marshals Service.
PUBLIC SAFETY・10 DAYS AGO
arcamax.com

Army sergeant arrested, accused of killing mother of their unborn child in Georgia

ATLANTA — A U.S. Army sergeant accused of fatally shooting a pregnant woman who was carrying their unborn son in Troup County earlier this week was arrested this week in North Carolina, authorities said. Alonzo Dargan Jr., 30, was taken into custody Thursday at Fort Bragg, where he was on...
GEORGIA STATE・9 DAYS AGO
The Independent

A Florida man whose two-year-old son fatally shot his mother during a video call has been arrested for failing to keep the gun out of the child’s reach. Veondre Avery, 22, appeared in court on Wednesday, a day after he was arrested on charges of manslaughter and failure to secure a weapon. His next court date is set for 23 November.
PUBLIC SAFETY・3 DAYS AGO
New York Post

An off-duty NYPD cop shot her ex-girlfriend and killed the woman’s new lover after catching the duo together at a Brooklyn home on Wednesday night, police and sources said. Yvonne Wu, 31 years old and a five-year veteran of the force, opened fire on the pair at the ex-girlfriend’s house on 19th Avenue near 79th Street in Bensonhurst at about 5 p.m., according to police and law enforcement sources.
BROOKLYN, NY・3 DAYS AGO