Patrick J. Adams Joins ‘A League Of Their Own’ Amazon Series As Recurring 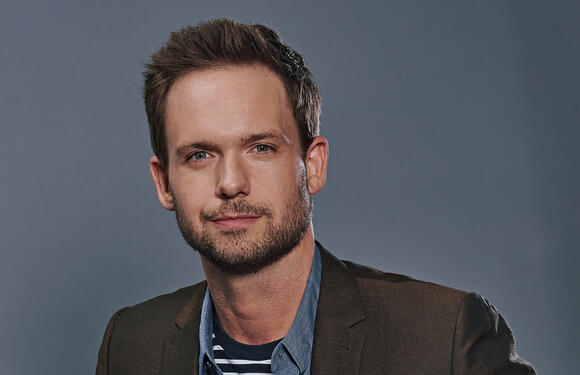 EXCLUSIVE: Suits alum Patrick J. Adams is set for a key recurring role opposite Abbi Jacobson in Amazon ’s A League Of Their Own , a reimagining of Penny Marshall’s 1992 film, from co-creators Jacobson ( Broad City) — who also stars — and Will Graham ( Mozart in the Jungle) and Sony Pictures TV.

The hourlong series, described as a fresh approach to Marshall’s classic about the real-life All-American Girls Professional Baseball League, will follow new characters who embody the spirit of a generation of women who dreamed to play professional baseball. “The show takes a deeper look at race and sexuality, following the journey of a whole new ensemble of characters as they carve their own paths towards the field, both in the league and outside of it,” according to the streamer.

Adams will play Charlie, Carson’s (Jacobson) handsome, midwestern husband, on his way home soon from fighting overseas during WWII. He’s eager to return to a life back home with his wife.

Adams makes his Broadway debut this spring in the revival of Richard Greenberg’s Take Me Out, alongside Jesse Tyler Ferguson and Jesse Williams, directed by Scott Ellis. He earned a SAG Award nomination for his role as Mike Ross in USA Network’s hit legal drama, Suits, and starred as Major John Glenn in Nat Geo’s adaption of The Right Stuff for Disney+. Adams is repped by ICM, The Rosenzweig Group, and attorney Lev Ginsburg.

Peter Scolari, the prolific television and stage actor who found instant fame and a lifelong friendship with Tom Hanks when the two co-starred in the hit 1980 TV comedy Bosom Buddies, died early Friday morning following a two-year battle with cancer. He was 66. His death was announced by Ellen Lubin Sanitsky at Wright Entertainment. Scolari’s 43-year show business career included such highlights as his Emmy-nominated series regular role of producer Michael Harris on Bob Newhart’s 1984-90 comedy Newhart, an Emmy-winning recurring role as the father of Lena Dunham’s character on HBO’s Girls, and, most recently, his role as Bishop Thomas Marx...
CELEBRITIES・2 DAYS AGO
Deadline

EXCLUSIVE: Sarah Jeffery (The CW’s Charmed), Emmy nominee Jane Adams (Hacks), Jake Weber (Those Who Wish Me Dead) and Balthazar Getty (Twin Peaks) will star in Year of the Fox, the latest feature from award-winning director Megan Griffiths (Lucky Them, Eden, The Off Hours), which has wrapped production in the state of Washington. The film written by Eliza Flug is a fictionalized depiction of teenage experiences and personal encounters she had while growing up in Aspen, Colorado, during the last of its utopian heyday. Set in 1997, it tells the story of 17-year-old Ivy (Jeffery), who was adopted as an infant...
MOVIES・2 DAYS AGO
Deadline

EXCLUSIVE: Adam Korson (SurrealEstate) has joined the cast of ABC’s upcoming comedy series Maggie. He will appear opposite Rebecca Rittenhouse, David Del Rio, Chris Elliott, Ray Ford and Leonardo Nam. The comedy, based on Tim Curcio’s short film, hails from Family Guy and Life in Pieces writer Maggie Mull, daughter of Clue actor Martin Mull, and Life in Pieces creator Justin Adler. 20th Television produces. Written by Mull and Adler, Maggie follows a young woman trying to cope with life as a psychic. Maggie regularly sees the future of her friends, parents, clients and random strangers on the street, but when...
TV & VIDEOS・10 DAYS AGO
Deadline

Tom Clancy’s Jack Ryan, starring John Krasinski, has been renewed for a fourth season, ahead of the series’ Season 3 premiere on Prime Video. Additionally, Michael Peña is set to join the Season 4 cast in an undisclosed role, Amazon has revealed. Production recently wrapped on Season 3, and a premiere date will be announced later. Season 3 finds Jack Ryan (Krasinski) on the run and in a race against time. Jack is wrongly implicated in a larger conspiracy and suddenly finds himself a fugitive out in the cold. Now, wanted by both the CIA and an international rogue faction that he...
TV SERIES・10 DAYS AGO

EXCLUSIVE: We have learned that Zachary Quinto, Lukas Gage, Simon Rex, Judith Light and Audra McDonald are set for FilmNation Entertainment’s Rightor Doyle feature directorial debut Down Low.  The news comes in the wake of Rex receiving a Gotham Award nomination in the Lead Performance category for A24 and FilmNation’s Red Rocket and Gage’s HBO series The White Lotus receiving a nomination in the Breakthrough Series – Long Format slot. Newcomer Sebastian Arroyo also rounds out the cast of the comedy feature written by Gage and Phoebe Fisher. Pic, produced by FilmNation Entertainment’s Ashley Fox and Lucas Wiesendanger and Sui Generis Pictures’ Ross Katz, centers around a...
MOVIES・2 DAYS AGO
Deadline

Veep alum Timothy Simons is set to star opposite Jessica Biel in Hulu’s original limited event series Candy, based on the true story of Candy Montgomery (Biel), who killed her friend Betty Gore (Melanie Lynskey) with an ax. In 1980 Texas, Montgomery seemingly had it all — a loving husband with a good job, a daughter and a son, a nice house in the brand new suburbs — so why did she kill her friend from church? Simons will play Pat Montgomery, a brilliant engineer and loving father and husband to Candy Montgomery, but the events on the morning of Friday, June...
TV SERIES・2 DAYS AGO
infusenews.com

Southern fare alumna Vanessa Estelle Williams has joined the Season 5 cast of Fox dramatization series 9-1-1 in an intensely recurring role. Williams will play Claudette Collins, a take-control 9-1-1 Call Center veteran who moves back to the fundamental Los Angeles station and shows the more youthful ones, including May Grant (Corinne Massiah), “how it’s done.” Claudette is intense yet reasonable, blunt, and certain as hellfire.
TV SERIES・12 DAYS AGO

Michael Gandolfini and Zack Schor have joined the cast of “The Offer” at Paramount Plus, which tells the story of the making of “The Godfather.” “The Offer” is a 10-episode series based on the experience of Oscar-winning producer Albert S. Ruddy (Miles Teller), detailing the behind-the-scenes events of the original 1972 film. Along with Teller, the series will star Matthew Goode as producer Robert Evans, Giovanni Ribisi as Joe Colombo, Colin Hanks as Barry Lapidus, and Dan Fogler as Francis Ford Coppola. Juno Temple also joined the cast as Bettye McCartt, Ruddy’s assistant. Gandolfini will play Andy Calhoun, an unexpectedly savvy businessman on...
MOVIES・2 DAYS AGO
Variety

NBC revealed a first look at Celina Smith as Annie in “Annie Live!,” which airs on Dec. 2 at 8 p.m. The image sees Smith wearing the titular orphan’s famous white-collared red dress, “holding hands” with the dog who will play Sandy in the production. Smith, who is 12 years old, was cast after NBC’s nationwide search for a “future star” to take the iconic role. She’s most recently been seen as Rebecca in “Tyler Perry’s Young Dylan” on Nickelodeon and has also played Young Nala in the touring company of “The Lion King.” “Annie Live!” also stars Harry Connick Jr. as...
TV & VIDEOS・1 DAY AGO
Deadline

EXCLUSIVE: Brett Tucker has joined the cast of Fox’s dance dramedy The Big Leap in a heavily recurring role. He will appear opposite stars Scott Foley, Simone Recanser, Teri Polo, Piper Perabo and Anna Grace Barlow. The series hails from Liz Heldens, Jason Winer, Sue Naegle, 20th Television and Fox Entertainment. Written by Heldens and inspired by a UK reality format, The Big Leap is a show-within-a-show that takes viewers on a journey of self-acceptance, body-positivity and empowerment at any age. It’s described as a modern tale about second chances, chasing your dreams and taking back what’s yours. The show revolves...
THEATER & DANCE・2 DAYS AGO
Deadline

EXCLUSIVE: Bernard David Jones’ pilot Remember has headed into pre-production, after receiving a WarnerMedia OneFifty grant supporting the early stages of its development. Remember is a dramedy that follows a forgetful millennial and his four best friends as they navigate queer love, rocky careers, and the ups and downs of friendship, while realizing that his forgetfulness is more serious than imagined. Jones wrote the series, in which he’s also set to star, and is producing it with Gem Little, with Tari Wariebi serving as its director. Casting for most roles is still being finalized. Jones previously found a series regular role in ABC’s The Mayor...
TV & VIDEOS・2 DAYS AGO

Granville Adams, who starred in all six seasons of the acclaimed HBO series Oz, died on Sunday, Oz star Kirk Acevedo announced. Adams was 58. The actor announced he was diagnosed with cancer in December 2020, reports TMZ. He is survived by his wife, Christina. "I lost my brotha today...
TV & VIDEOS・13 DAYS AGO
Deadline

EXCLUSIVE: With his latest film The Harder They Fall bowing in theaters today, Emmy-nominated actor Jonathan Majors isn’t looking to slow down anytime soon. He is now set to star in Magazine Dreams, the new bodybuilding drama from Elijah Bynum. Bynum is writing and directing, with Majors also set to serve as an executive producer on the project under his Tall Street Productions. The script was included on the 2020 Black List. The film follows an amateur bodybuilder who struggles to find human connection in the exploration of celebrity and violence. Nightcrawler producers Jennifer Fox and Dan Gilroy are on board to produce....
MOVIES・2 DAYS AGO
GreenwichTime

The show is based on the Hugh Howey novel series of the same name. Common will star alongside previously announced cast members Rebecca Ferguson, Tim Robbins, Rashida Jones, and David Oyelowo. More from Variety. “Wool” is a set in a ruined and toxic future where a community exists in a...
TV & VIDEOS・8 DAYS AGO
GoldDerby

Everything to know about the ‘L.A. Law’ reboot starring Corbin Bernsen, Blair Underwood

After being in talks for nearly a year, the highly anticipated “L.A. Law” revival officially received a pilot order by ABC in October 2021. The original drama series was created by Steven Bochco and Terry Louise Fisher and produced by David E. Kelley. It aired on NBC for eight seasons between September 1986 and May 1994 and then returned for a reunion movie in 2002. The new pilot will be written by Marc Guggenheim and Ubah Mohamed and directed by Anthony Hemingway, with the late Bochco’s son, Jesse Bochco, and widow, Dayna Bochco, serving as executive producers. Here’s everything to...
LOS ANGELES, CA・2 DAYS AGO
darkhorizons.com

Mel Gibson has been set to star in “The Continental,” the TV event series prequel to the Keanu Reeves-led “John Wick” film franchise. The series will explore the story through the eyes and actions of a younger version of Ian McShane’s Winston Scott character who enters New York City’s mysterious underworld 1975 in an attempt to seize the iconic hotel for the world’s criminals.
TV SERIES・5 DAYS AGO
bsckids.com

In a special episode of The Patrick Star Show, titled “Terror at 20,000 Leagues,” Patrick goes on an adventure for Halloween in this feature that will have stop-motion, puppets and 2D animation. The episode will premiere on Friday, October 22nd, at 7:00 p.m. on Nickelodeon and we have tons of pictures and video of the upcoming show.
TV & VIDEOS・4 DAYS AGO