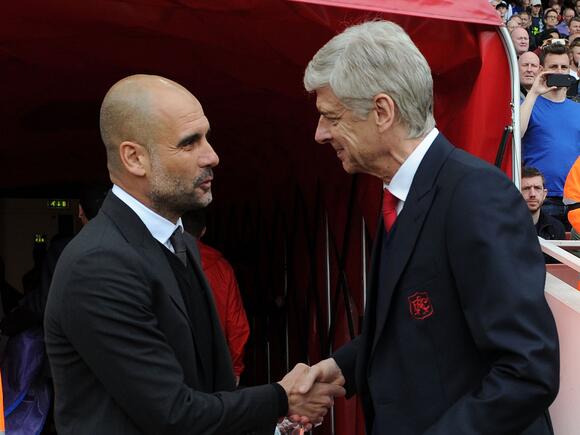 Pep Guardiola is open to Fifa’s idea for a biennial World Cup and believes that the plans led by Arsene Wenger should be discussed between all of world football's stakeholders.

The Manchester City manager has lent his tacit support to the plans, which would see the tournament held every two years rather than four. A vote of Fifa's 211 members is expected to be held later this year.

Wenger, who is now working as Fifa's chief of global football development, believes that the proposals would not increase the workload on players as world football's governing body expects new competitions to fill the currently vacant summer months.

Guardiola agrees with that analysis, and said on Friday that the new format would be a tournament of "the biggest quality", but called for all those within football to discuss the plans without self-interest.

"Always I’m glad when new ideas are put on the table to be discussed. You don’t have to criminalise ideas," he said.

"The clubs and the leagues defend their position, Fifa defend theirs and Uefa defend theirs. That’s why when we talk about global football ideas it is ridiculous because everyone just looks after themselves.

"The World Cup is amazing. As a supporter I enjoy watching and if it is every two years that would be good. I’m in agreement with Arsene in that if it isn’t the World Cup then it will be another competition. The Confederation Cup or a new tournament.

"The only reality is that the top players only have two weeks off, not three months for regeneration physically and mentally. It is just two or three weeks off. During 11 months it is games, games, games.

"What I think Arsene has proposed is a tournament of the biggest quality. OK, we don’t play the World Cup and they’ll just create another tournament, that is for sure."

Guardiola added: "I’m glad that one person who has done incredible things in world football – not just the Premier League – has put a situation on the table. We are going to talk about the good things and bad things related to it.

"But don’t say altogether we’re going to think about it because this is ridiculous. Everybody thinks for themselves, that’s why I’m not a big supporter of (the idea) that we will unify what is best for football for the next years."

Plans are currently under exploration by FIFA over shifting the showpiece competition from its current quadrennial cycle into a biennial format. Gareth Southgate believes that the concept of hosting the World Cup every two years "doesn't seem to make sense" amid continuing speculation over the future of the tournament's staging.
UEFA・10 DAYS AGO
Yardbarker

Arsene Wenger’s return to management has been confirmed… but it’ll only be for one game. Wenger enjoyed a brilliant tenure at Arsenal before finally handing over the reins and moving on to a new position in football development with FIFA. The Frenchman has been continually linked with various managerial roles...
PREMIER LEAGUE・9 DAYS AGO
Daily Mail

Arsene Wenger claims football is coming around to his idea of a World Cup every two years as the former Arsenal boss challenged his critics to devise a better alternative to his ambitious plan. Last month Wenger, who is now FIFA's head of global development, unveiled his idea for the...
UEFA・8 DAYS AGO
Daily Mail

Raheem Sterling is willing to sign a new contract with Manchester City - but only if he receives assurances about his future under Pep Guardiola, reports claim. The winger enjoyed a sensational summer with England as one of Gareth Southgate's stars of Euro 2020, leading the Three Lions to the final against Italy at Wembley with three goals at the tournament, but he has been unable to replicate that form since returning to club duty.
PREMIER LEAGUE・9 DAYS AGO

Manchester City will step up their pursuit of Erling Haaland with the club set for talks with his agent Mino Raiola in January over a move to the Premier League next summer. According to The Times, Haaland is now the top name on City's list of transfer targets and Pep Guardiola is looking for a new No 9 after the departure of Sergio Aguero last summer.
PREMIER LEAGUE・8 DAYS AGO
chatsports.com

Arsene Wenger believes offside calls will be decided by technology as early as next year as he claims the process must be made quicker. Technology has already taking a prominent role in refereeing decisions in football with VAR and goal-line technology in effect across the game globally. But the formal...
PREMIER LEAGUE・8 DAYS AGO
CBS Sports

The UEFA Champions League returned on Tuesday this week with eight Matchday 3 games and Wednesday has another eight matches. There are plenty of enticing showdowns as always, with Manchester United vs. Atalanta, leading the way as Barcelona and Chelsea are also in action. Following this week's games, the 32 remaining teams will be at the halfway point of the group stage with just nine more points up for grabs ahead of the knockout stage.
UEFA・2 DAYS AGO
chatsports.com

Arsene Wenger will return to management for the first time since leaving Arsenal in 2018 when he takes charge of a Saudi Arabian super team in January. The 71-year-old, who hasn't taken another managerial role since he ended his legendary 22-year stint with the Gunners three years ago, will be in the dugout for the 2022 Riyadh Season Cup match against Lionel Messi's PSG.
PREMIER LEAGUE・9 DAYS AGO

Chelsea boss Thomas Tuchel has commented on his thoughts over Arsene Wenger's recent proposals on the future of international football. The former Arsenal manager has recently spoken on how he thinks the footballing calendar could be changed in forthcoming seasons. One proposal includes holding the World Cup every two years,...
PREMIER LEAGUE・6 DAYS AGO
chatsports.com

Pep Guardiola appears to have scored victory in his quest for five substitutions to be permitted in the remainder of the Carabao Cup. As Sportsmail revealed earlier this month, the Manchester City boss was instrumental in a campaign to increase the number of interchanges for the rest of the competition.
PREMIER LEAGUE・8 DAYS AGO
chatsports.com

Former Liverpool defender Jamie Carragher feels players are being made to suffer an 'an unreasonable and increasingly unsustainable football calendar' - but he is not convinced Arsene Wenger's biannual World Cup plan is the answer to the problem. Wenger has been seeking the support of many top former players and...
PREMIER LEAGUE・8 DAYS AGO
chatsports.com

Manchester City are a 'possible destination for Bayern Munich striker Robert Lewandowski, the superstar's agent believes' - with veteran targeting four more years at the top in boost to Pep Guardiola

Manchester City are a 'possible destination' for mercurial Bayern Munich striker Robert Lewandowski, his agent has reportedly claimed. Pep Guardiola's pursuit of a new frontman during the recent summer window was well documented, with City's chase for Tottenham ace Harry Kane falling short. Lewandowski was another name rumoured to be...
PREMIER LEAGUE・7 DAYS AGO

Pep Guardiola has expressed surprise at comments from Raheem Sterling that he would consider leaving Manchester City. The City manager, however, admits he could understand why players would want more game time. Sterling, whose contract at the Etihad Stadium expires at the end of next season, said this week he...
PREMIER LEAGUE・6 DAYS AGO
The Independent

Pep Guardiola has told Raheem Sterling that he does not select players based on "what they have done in the past" after the Manchester City winger revealed he would consider leaving the Etihad in search of regular playing time.Sterling has only started once in the Premier League this season since returning from his starring role with England at the summer's European Championship and revealed this week that he would be "open" to playing abroad one day.The 26-year-old's current Etihad contract is set to expire at the end of the next season and, while there is a willingness on both sides...
PREMIER LEAGUE・6 DAYS AGO
goal.com

Is Wenger's plan for biennial World Cups 'a stupid idea' or 'the right solution' for football's congested calendar?

The Frenchman has caused controversy with his plans for a revamp of the international match calendar, but he is adamant it would be best for the game. Belgium duo Romelu Lukaku and Eden Hazard were forced to pull out of last Sunday's Nations League third-placed play-off with Italy because of "muscle overloads".
UEFA・8 DAYS AGO
goal.com

Manchester United legend Roy Keane claims that Raheem Sterling has “obviously [had] some bust-up” with Manchester City manager Pep Guardiola. Sterling arrived at City in 2015 and has lifted three Premier League titles, four League Cups and an FA Cup during his time at the Etihad. The 26-year-old winger, who...
PREMIER LEAGUE・7 DAYS AGO
SPORTbible

Arsene Wenger has claimed offside calls could be "automated" for the 2022 World Cup. As part of his role as FIFA's chief of global football development, Wenger has been looking at improving the beautiful game with a number of changes. Rather controversially, the former Arsenal boss is advocating for a...
PREMIER LEAGUE・8 DAYS AGO
chatsports.com

Arsene Wenger: Invincible, the definitive portrait of one of the greatest managers of all time, comes to cinemas from November 11. It will be available on Blu-ray, DVD and digital download on November 22. Click here to pre-order now. Courtesy of Noah Media Group, the creators of some of the...
ENTERTAINMENT・7 DAYS AGO
SPORTbible

Arsene Wenger is to return to the dugout for two charity matches in the next few months. The 71-year-old has not been in the managerial hot-seat since ending his glittering 22-year stint with Arsenal in 2018, having taken up a role within FIFA as Chief of Global Football Development. On...
PREMIER LEAGUE・8 DAYS AGO