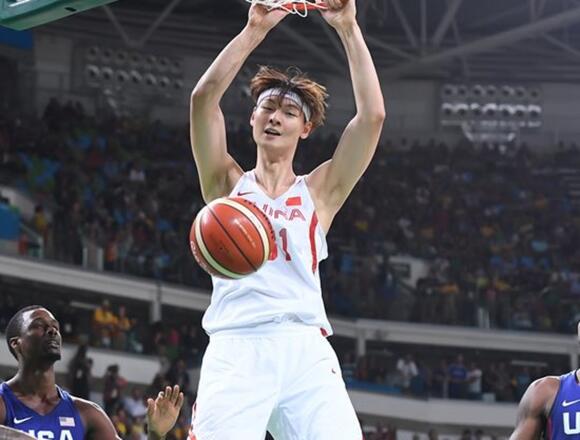 Today, the Lakers agreed to trade Marc Gasol to the Grizzlies. The Lakers had to give up a draft pick and some cash, but in return they did receive the draft rights to the Chinese Basketball Association star, Wang Zhelin.

Currently, Wang Zhelin is a player for the Fujian Sturgeons in the Chinese Basketball Association. He's a 7-footer weighing in at 270, and was actually originally drafted by the Grizzlies in 2016 in the second round.

Zhelin does have some NBA style experience. He played in the 2018 NBA summer league as a member of the China men's national basketball team. He played in only a few games.

In the CBA (Chinese Basketball Association) Wang Zhelin won the 2019 MVP. He's also a four-time CBA All-Star and was the 2013 CBA Rookie of the Year. His best overall year was his MVP year where he averaged 25.7 PPG, 13.9 RPG, and 2.3 APG in 46 games for the Fujian Sturgeons. Here are some highlights from a game where he dropped a casual 51 points and 13 rebounds.

Now it is likely that he may never see the NBA floor. The priority in this trade was to clear Marc Gasol off the Lakers roster, save some future cap space, and to offset the draft pick the Lakers are sending to Memphis. At the age of 27, that the Memphis Grizzlies never brought him over for some development to adjust to the NBA style of play probably hurt future development to see any good NBA playing time. This is no certainty of course, but the story is far from original. Still, it is possible the Lakers have a real interest in Wang Zhelin's game.

Rajon Rondo and Russell Westbrook are now teammates on the Los Angeles Lakers, and any beef between them is apparently dead. Rondo said as much during his introductory press conference with the Lakers and then again at Tuesday’s Media Day:. If you somehow forgot, there was a bit of Rondo-Russ...
NBA・24 DAYS AGO
ClutchPoints

Magic Johnson thinks the 29 other NBA teams not named Los Angeles Lakers are in danger. After all, they will be facing LeBron James who looks hungrier than ever to win the Larry O’Brien trophy. On Tuesday during the Lakers’ Media Day, Johnson praised LeBron for being in “excellent physical...
NBA・23 DAYS AGO
Lakers Nation

The additions of Russell Westbrook and Carmelo Anthony to the superstar duo of LeBron James and Anthony Davis give the Los Angeles Lakers one of the most talented rosters on paper of any team in the NBA. But almost immediately, many had questions about how they would fit together. In...
NBA・3 DAYS AGO
AllLakers

New Lakers point guard Russell Westbrook was always going to be a bit of an awkward fit with incumbent superstars LeBron James and Anthony Davis. Just how awkward the fit could get was on display during his regular season debut Tuesday night, in a performance so bad that James had to console him.
NBA・1 DAY AGO

Former Laker Shannon Brown is among one of almost 20 former NBA players charged in a multi-million-dollar health insurance fraud scheme. The indictment in a New York Federal court unsealed on Thursday says the scheme was to "rip off the league's benefit plan" per Jonathan Dienst at WNBC. Laker fans...
NBA・15 DAYS AGO
AllLakers

LeBron James and Russell Westbrook have both had themselves pretty successful careers thus far. Despite both careers being at different points and reaching different heights, you can say they’re two of the top players in the NBA. However, with success comes hate and criticism from those who try and pick out the flaws.
NBA・15 DAYS AGO
Lakers Nation

Russell Westbrook suited up for the Los Angeles Lakers on Friday night for the first time this preseason after resting the first two games. He played alongside LeBron James and stumbled out of the gate with a clunky performance. In 17 minutes of action, all in the first half, Westbrook...
NBA・13 DAYS AGO
AllLakers

In the Lakers loss to the Phoenix Suns on Wednesday evening, there were a lot of glaring disappointments. There were some bright spots to be sure, but the issues were bigger than the sunshine. Sorry for the pun. 'Melo In Yellow. It won't show up on ESPN because Carmelo Anthony's...
NBA・15 DAYS AGO

LeBron James has built a career on chase-down blocks, and being absolutely fearless on defense. Easy to be fearless on defense when you're a man of athletic gifts like James is. Here are nine minutes of James denying dunks and layups. Just ask Warriors guard Jordan Poole. Poole was recently...
NBA・16 DAYS AGO
AllLakers

Preseason/training camp is coming to a close, and it was time for the Lakers to finalize their 15 slot roster. Cam Oliver, Chaundee Brown and Trevelin Queen, and Joel Ayayi have all been cut. They follow Mac McClung and Frank Mason III, who were cut earlier in the preseason. Oliver, Queen, and Brown are likely to be playing for the Lakers G-League affiliate, the South Bay Lakers.
NBA・7 DAYS AGO
AllLakers

The ranking of 'who is the best NBA player of all time' is everyone's favorite thing to do when they want to be infuriated. It's like a national pastime at this point. That said, USA today had a panel of voters put their list of their 75 best NBA players of all time, and averaged out the votes to create a penultimate list. Plenty of Lakers on that list, which is expected from arguably (definitely) the greatest NBA franchise out there. The number one player listed is sure to ruffle some feathers.
NBA・14 DAYS AGO
AllLakers

Dave McMenamin from ESPN reported today that the Lakers young guard/small forward Talen Horton-Tucker is to undergo surgery for his injured thumb. After losing Trevor Ariza for at least two months just before the preseason started, Laker fans probably got nervous at the prospect of injuries already hitting the team. Malik Monk strained his groin and is to be re-evaluated in a week, and now Talen Horton Tucker is going to miss time with surgery to get his injured thumb healed up.
NBA・11 DAYS AGO

Lakers News: Russell Westbrook Says Who His Favorite Laker Was and It's A Surprise

At this point, Laker fans are keenly aware that Russell Westbrook grew up a Lakers fan. Westbrook is a Long Beach-born kid, and he attended Leuzinger High School in Lawndale before attending UCLA. Westbrook was an LA kid, through and through. Naturally, a type of player with an assassin's mentality...
NBA・16 DAYS AGO
AllLakers

In the first few preseason games, Malik Monk was the bright spot of the Laker's blowout losses. In the Lakers second preseason loss last week to the Suns, Monk had a team-high 18 points on 7-11 shooting and 4-7 from deep. Injuries have already started to weigh the Lakers down,...
NBA・11 DAYS AGO
AllLakers

In the Lakers blowout loss to the Phoenix Suns on Sunday evening, there were spurts where the Lakers defense left a lot to be desired. This is actually reductive, as there were parts of the game where the Lakers' defense was as good as I've ever seen. I digress. In...
NBA・11 DAYS AGO
AllLakers

Lakers News: Steph Curry Has A Lot To Say About LeBron James

The NBA is known for its familiar faces such as LeBron James and Steph Curry. These two players have been around for a long time (one longer than the other) and it is only right that they are able to appreciate the greatness that each of them brings to the table.
NBA・14 DAYS AGO
ClutchPoints

Lakers vs. Warriors prediction, odds, pick, and more for Oct. 19

The NBA season kicks off Tuesday night and the games couldn’t be better. The Los Angeles Lakers will host the Golden State Warriors Tuesday evening in a matchup that headlines the beginning of the new NBA season. This west coast rivalry promises to deliver fans the NBA return they have been waiting for. It’s time to continue our NBA odds series and make a Lakers-Warriors prediction and pick based on Lakers Warriors odds.
NBA・3 DAYS AGO
AllLakers

Lakers News: No Time To Panic, Just Time For the Lakers To Adjust

The start of the Lakers season has not been pretty. The Lakers are 0-4 and have lost most of those games by double digits. The thing is, the Lakers have not even played in a single game that counts. They have not played a single game where their "big three" have played significant minutes. Are their issues? Yes, a lot of them. Some issues need resolving, but the Lakers haven't fully addressed them because it is becoming apparent that Coach Frank Vogel and the Lakers are playing this close to the vest.
NBA・10 DAYS AGO
AllLakers

Lakers News: LeBron James Understands Patience and Work Are Needed for this Team

After the Lakers fifth straight preseason loss, the vultures are attempting to circle. Except for Skip Bayless, he has been frothing at the mouth since game one, and James wasn't even playing. I digress. During the post-game press conference, James exuded his leadership role by talking about patience. This is...
NBA・9 DAYS AGO
AllLakers

Lakers: One Year Ago Today, the Lakers Won Championship Number 17

One year ago, the Lakers won the 2020 NBA championship. It is really strange acknowledging that in one year, two NBA teams have been crowned Champions, but there is the COVID-19 pandemic for you. It's impossible to ignore. The pandemic changed everyone's lives. Some more than others. It changed the...
NBA・11 DAYS AGO