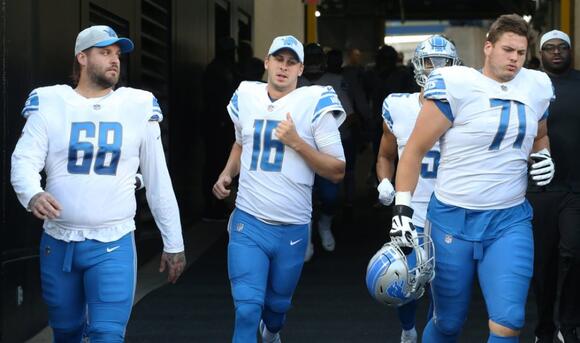 Indianapolis Colts cornerback Xavier Rhodes missed practice for the third consecutive day on Friday and is unlikely to play against the visiting Seattle Seahawks.

The Colts expect guard Quenton Nelson to be ready on Sunday after a back injury forced him to skip Wednesday’s workout.

Samuel re-injured his groin, which was a concern for parts of the offseason, in practice earlier this week. 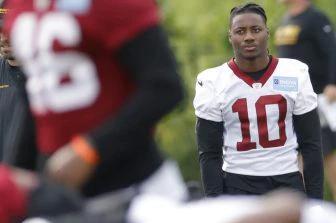 The next man up for the Lions is converted defensive lineman Matt Nelson. If things don’t go well against Nick Bosa and Dee Ford for Nelson, it’s possible the Lions would lean on first-round pick Penei Sewell.

Sewell is listed as the starter at right tackle on the Lions’ depth chart but played on the left side at Oregon.

While coaches resist the urge to hit the panic button amid a slow start to the season, they'll make necessary changes to pull their teams out of a rut or replace a weak link on the roster. Every week, clubs have to tweak starting lineups because of injuries, but in...
NFL・18 DAYS AGO
The Spun

One of the most-intriguing games of this Sunday NFL slate is the Los Angeles Rams taking on the Detroit Lions. While the matchup isn’t the sexiest on paper, it pits former Lions quarterback Matthew Stafford against former Rams quarterback Jared Goff. The Goff era ended abruptly in Los Angeles, with...
NFL・1 DAY AGO
Insider

The Arizona Cardinals are the last undefeated team in the NFL, and have finally reached the top of our Power Ranking.
NFL・3 DAYS AGO
The Spun

NFL Fans Are Furious With Ruling In 49ers vs. Colts

Brandon Aiyuk and the San Francisco 49ers were bailed out pretty good by an odd NFL rule on Sunday evening. The 49ers wide receiver muffed a punt by the Colts – understandable, given the nasty weather in San Francisco on Sunday night – and he and the ball ended up in the end zone.
NFL・20 HOURS AGO

How long are the Lions stuck with Jared Goff?

Jared Goff will not be the Lions’ starting quarterback a minute longer than he has to be, but how long are they stuck with him on the roster?. After acquiring him in the trade that sent Matthew Stafford to the Los Angeles Rams, Lions general manager Brad Holmes told the team website he doesn’t view Jared Goff as a bridge quarterback.
NFL・12 DAYS AGO
AllLions

The subpar performance of quarterback Jared Goff against the Cincinnati Bengals raised several eyebrows. Goff and the Lions' offense struggled to gain any sort of rhythm, and were plagued by mistakes, missed assignments, missing open receivers and penalties. As a result, Detroit went on to be defeated by the Cincinnati...
NFL・5 DAYS AGO
AllLions

You probably can't blame a bad signal for Detroit Lions quarterback Jared Goff's phone cutting off when he spoke to Los Angeles Rams head coach Sean McVay about being traded to one of the worst organizations in the NFL. Click. Dial tone. That is what McVay reportedly heard, when he...
NFL・1 DAY AGO
Sportsnaut

Check-in here throughout the year for the NFL games today full weekly schedule. Including links to Sportsnaut’s season forecasts for
NFL・11 HOURS AGO

It’s primetime football season, Colts fans. The Indianapolis Colts travel to Baltimore squaring off against a tough Ravens squad. Will Indy be able to contain Lamar Jackson? Can Carson Wentz move the football down the field against Baltimore’s defense? Let’s dive into our weekly game preview, closing it out with our prediction.
NFL・14 DAYS AGO
Sportsnaut

The visiting Detroit Lions battled but ultimately succumbed to a more complete team in the Los Angeles Rams, who won
NFL・22 HOURS AGO
South Bend Tribune

INDIANAPOLIS — Two Colts defensive backs are in the concussion protocol after Monday night’s crushing loss to the Baltimore Ravens, and Indianapolis is awaiting word on the severity of Rodrigo Blankenship’s hip injury before making a decision at kicker. Cornerback Xavier Rhodes and Andrew Sendejo must pass through the five...
NFL・13 DAYS AGO
chatsports.com

Really wish I had something else to do tonight. Actually I do, I’m missing this one. But for those Pittsburgh Steelers fans who want to sit back and watch some AFC football to round out Week 5, join us!. Not much to say about this one, but on paper it...
NFL・14 DAYS AGO

Check out odds, plays and more for the Indianapolis Colts vs. Houston Texans NFL Week 6 matchup on October 17, 2021.
NFL・13 DAYS AGO
chatsports.com

Colts vs. Texans: How to watch, odds, injuries in Week 6

The Indianapolis Colts are licking their wounds — figuratively, but they do have new injuries to watch — heading into their NFL Week 6 matchup in Lucas Oil Stadium against the Houston Texans. Both teams come into the matchup with 1-4 records. The Colts beat the Miami Dolphins, while Houston...
NFL・11 DAYS AGO
chatsports.com

Both cornerback Xavier Rhodes and safety Andrew Sendejo are in the NFL’s concussion protocol, according to Colts’ head coach Frank Reich. The Colts have dealt with their fair share of injuries across the board this season, and now they’ve added two more to the list in Rhodes in Sendejo. At one point during Monday night’s game against the Baltimore Ravens, the entire Indianapolis secondary, aside from slot cornerback Kenny Moore, consisted of backup players.
NFL・12 DAYS AGO
ESPN

INDIANAPOLIS – Quarterback Carson Wentz’s best throwing game of his NFL career ended up being a footnote in Week 5 because the Indianapolis Colts blew a 19-point lead in their road loss to the Baltimore Ravens. In Sunday's 31-3 victory over the Houston Texans, Wentz again took a backseat, because...
NFL・6 DAYS AGO

The Indianapolis Colts today released their final injury report for Week 6 of the NFL season ahead of their Sunday game. Kicker Rodrigo Blankenship has been ruled OUT for Sunday’s game. Blankenship injured his right hip against the Ravens and will miss Sunday’s game. In his absence the Colts signed Michael Badgley who will be promoted from the practice squad to kick Sunday.
NFL・10 DAYS AGO
ClutchPoints

The Indianapolis Colts and San Francisco 49ers will play in an inter-conference matchup on Sunday evening. It’s time to continue our NFL odds series and make a Colts-49ers prediction and pick. The Colts (2-4) and 49ers (2-3) will play on Sunday night, as both teams look to keep pace in...
NFL・2 DAYS AGO
Houston Chronicle

Texans' Justin Britt out with injury against Colts

Starting center Justin Britt will not play against the Colts on Sunday due to a lingering knee injury, a person with knowledge of the injury confirmed Friday. Reserve lineman Justin McCray, who has played in four games this season, will start in place of Britt. Britt did not practice this...
NFL・9 DAYS AGO