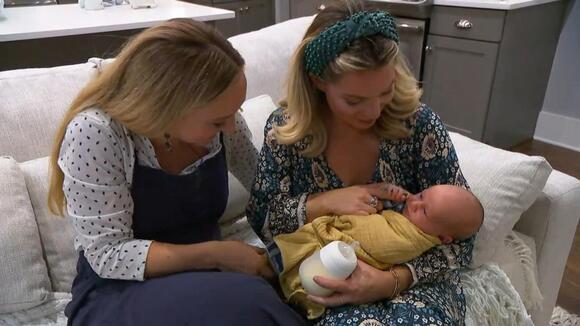 When Cathey Stoner gave birth to a baby boy last month, it was a miracle years in the making .

Stoner delivered the child after serving as a surrogate for her twin sister, Sarah Sharp, who could not carry a pregnancy after being diagnosed with choriocarcinoma, a rare and fast-growing cancer that occurs in a woman's uterus.

The newborn baby, named John Ryder Sharp and born on Aug. 18, is the biological child of Sharp and her husband, Richard.

"Her offering that to me was the biggest act of love that anyone's ever extended to me or my family," Sharp, 33, said of her sister carrying her child. "Surrogacy is a beautiful gift that you can give somebody and I will forever be grateful."

Sharp, who, like her sister, lives in the Nashville area, was diagnosed with choriocarcinoma in 2018, about one year after she gave birth to her now 4-year-old daughter Charlotte.

She underwent seven rounds of chemotherapy in an attempt to beat the cancer while also saving her uterus. She was declared cancer free in December 2018, but by her first checkup, in January, the cancer had returned.

MORE: I've been a surrogate for 5 families: Here's what I want people to know about the process

She began a new course of chemotherapy and also underwent a hysterectomy, which successfully removed the cancer but left her without the hope of giving birth to another child.

Just before Sharp underwent the hysterectomy, Stoner told her sister for the second time in her cancer battle that she would carry any future children for her.

"We kind of laughed a little bit again but for me, in the back of my mind, it was something to hold onto," Sharp told "Good Morning America" in June . "It was something to help me move myself forward mentally. It was hope and grace and the future all in one."

Once Sharp finished her cancer treatments, she prepared to become a mom again, and turned to her sister for help.

Stoner, mom to a 4-year-old son and a 6-year-old daughter, said she had no hesitation about helping her sister expand her family in any way she could.

"We decided to knock on the doors and see if they opened," Stoner told "GMA" in June. "There was a lot of waiting, but it went really smooth."

By the end of 2020, the two sisters, whose story is featured in the new issue of People magazine , were celebrating the news that Stoner was pregnant.

"From the beginning I've felt differently in this pregnancy because I know it's my nephew and not my son, and I have loved every step of the way," said Stoner, who was the baby's gestational carrier. "I tell people, 'I'm just carrying my nephew.'"

"To be able to go to the doctor for such a happy reason is really healing for all of us," she added, noting that her sister was with her at every doctor's appointment during the pregnancy.

When Stoner gave birth to her nephew, John Ryder, on Aug. 18, she was supported in the delivery room by Sharp and their two husbands.

"We feel so unbelievably honored to be his parents and raise him," said Sharp. "A lot of love brought him here."

Cary Patonai and her husband Tim’s home is full of joy this week after adding a big addition to their family.
HEALTH・1 DAY AGO
Essence

Have You Seen This? Groom carries bride's twin sister who has disability down the aisle

THE ALTAR — In our era of divisive and disheartening headlines, it's hard to read the news or jump on social media without being left feeling melancholy. But amidst this ocean of bad vibes, you'll occasionally find a story that rebalances the world for a moment and restores our belief in the kindness of others.
RELATIONSHIP ADVICE・5 DAYS AGO

Back in June, Bass, 42, told People that he and artist Turchin, 34, had gone through years of surrogacy attempts, failed IVF treatments and a miscarriage in their journey to become dads. "You have your vision of how it's all going to go, right? When we went into IVF and surrogacy, we had no idea what it was all about," Lance said at the time.
CELEBRITIES・1 DAY AGO
Page Six

Phaedra Parks is one busy lady. The “Real Housewives of Atlanta” alum, 47, maintains multiple careers as an attorney, mortician, producer and actress, but her most demanding job is being a mom of two boys. “The single mom life is crazy, but I wouldn’t change it for anything,” Parks, 47,...
CELEBRITIES・7 DAYS AGO
HipHopWired

Diddy continues his world tour of bachelorhood and his newest love interest is Joie Chavis. Thankfully Bow Wow is not upset with the mogul dating his child’s mother. As spotted on TMZ the former So So Def Records star is not phased at all by the pictures of his former flame looked very cozy with the […]
CELEBRITIES・15 DAYS AGO
People

The journalist and Project Runway judge, 34, is pregnant and expecting her first baby with musician husband Jonathan Singletary, she announced on Monday. "I'm so excited to finally share the excitement with our friends and extended community. It's been so hard to keep this a secret!" Welteroth tells PEOPLE. "I'm just excited to learn more about what this new life is here to teach us. I'm already learning so much from this experience. We are both excited to experience new levels of love."
CELEBRITIES・5 DAYS AGO

When it comes to keeping Stormi happy, Kylie Jenner doesn’t play! The reality TV personality and beauty mogul recently took social media to reveal that she is upgrading her daughter’s playroom before giving birth to her second baby. The 24-year-old pregnant mother gave her fans a glimpse of the renovations...
CELEBRITIES・3 DAYS AGO
ABC11 Eyewitness News

Vicky Goodson never got to meet her daughter. Her family hopes her story can help others avoid the same tragedy.
CHARLOTTE, NC・10 DAYS AGO
WKRC

MIDDLETOWN, Ohio (WKRC) — A heartbreaking moment captured in time: a newborn baby lying on her dying mother’s chest as her father lays his hand on her frail little body. “It’s kind of like bittersweet because we really wanted this baby, but now she’s not here to share it with me,” said Jonathon Luvender, who thought he still had forever to go with his wife, Brittany, and their two girls.
MIDDLETOWN, OH・11 DAYS AGO
KENS 5

Usher-ing in a new generation. Usher and his girlfriend, Jennifer Goicoechea, welcomed their second child together, a baby boy, on Sept. 29. “Hi my name is Sire Castrello Raymond,” the “U Got it Bad” singer captioned a photo of his newborn on Instagram Tuesday, announcing the happy news. “I am...
CELEBRITIES・4 DAYS AGO
imdb.com

Kaitlynn Carter is in baby bliss after giving birth to her first child with boyfriend Kristopher Brock. On Wednesday, Oct. 6, The Hills: New Beginnings star announced the arrival of her baby boy on Instagram. She captioned a photo of the newborn, "our chunky little guy, Rowan Carter Brock, was born 9/30/21 at 2:53am, 8 lbs 4 oz. everyone is happy and healthy and so in love." It's safe to say Kaitlynn's home is baby-proof and then some. In the weeks leading up to her delivery, the reality star shared a look at her new and improved playroom. "This is honestly how I fantasized this room would turn out but didn't think it was possible with how much...
CELEBRITIES・9 DAYS AGO
Hello Magazine

Rachel Riley has shared her excitement over welcoming her second child, who is due any day now. Ahead of the impending arrival, the Countdown star took part in a heartwarming campaign with her 22-month-old daughter Maven to announce Amazon's desirable toys for Christmas 2021. Exclusive: Rachel Riley talks family life...
FAMILY RELATIONSHIPS・4 DAYS AGO
Daily Mail

Jermaine Jenas has welcomed his fourth child with wife Ellie. Ellie took to Instagram on Wednesday to share the first picture of their baby boy, which she captioned: 'Our beautiful son Jacob Anthony Jenas - we love you so much.'. Ex Liverpool and Arsenal footballer Jermaine Pennant commented: 'The little...
CELEBRITIES・3 DAYS AGO
FOX21News.com

Living Local Content Disclaimer: The information, advice and answers displayed in the Living Local section of FOX21News.com are those of individual sponsors, not FOX21. According to Board-Certified Music Therapist, Lizzie Luppino, a baby’s hearing system is developed by 3.5 months in utero and they can begin hearing sounds from the outside world around 4 months. Luppino, who is with Healing Notes Music Therapy, says babies can hear singing more clearly than speaking at that time because of the great range of pitch, inflection and rhythm in the singing voice. So, using music during pregnancy can help mom bond with baby, help with relaxation, stimulate brain development, and can act as a valuable tool to help comfort the baby while in utero and right after birth.
RELATIONSHIPS・2 DAYS AGO
b975.com

Lance Bass and husband Michael Turchin are officially a family of four. On Thursday, the *NSYNC member happily revealed that their twins have finally arrived. “The baby dragons have arrived!! I can not express how much love I feel right now,” Lance, 42, celebrated on Instagram, posting photos of the birth certificates. “Thank you for all the kind wishes. It meant a lot.”
FAMILY RELATIONSHIPS・1 DAY AGO
MadameNoire

Eve Announces Pregnancy After Years Of Dealing With Infertility

The rapper is on the road to healing as she awaits the arrival of her first child due February 2022.
CELEBRITIES・1 DAY AGO
Lawrence Post