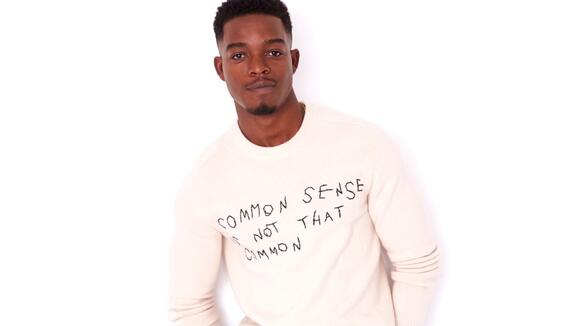 EXCLUSIVE : Homecoming star Stephan James has been tapped as the male lead in Beacon 23 , Spectrum Originals and AMC Networks’ psychological thriller series based on the book by Hugh Howey.

The series is produced by Boat Rocker Studios and Spectrum Originals. James will exec produce alongside his co-star Lena Headey, who will also executive produce through her production company, Peephole Productions, as part of her first-look deal Boat Rocker Studios.

James will play the keeper of Beacon 23, a man living in complete solitude at the edge of the universe, a condition that is eating away at his sanity. Plagued by the scars and secrets of the past, he is thrown into a tense conflict with a woman bearing secrets as deep as his own.

Created by Zak Penn, the suspenseful thriller follows two people, whose fates become entangled after they find themselves trapped together at the end of the known universe. Headey’s Aster mysteriously finds her way to a lonely beacon keeper, on his lighthouse in the darkest recesses of space. A tense battle of wills unfolds as James’ keeper begins to question whether Aster is friend or foe as her ability to disguise her agenda and motives could make her a formidable opponent.

Co-commissioned by Spectrum Originals and AMC Networks, Beacon 23 will have a nine-month exclusive run for Spectrum before becoming an AMC original with a second window across AMC Networks platforms.

James starred in Amazon’s Homecoming , based on the podcast, and Ava DuVernay’s Selma . He has also starred in If Beale Street Could Talk , Quibi’s #FreeRayShawn and will next be seen in National Champions for STX in November 24. He is currently in production on the Apple TV drama series Surface.

EXCLUSIVE: With his latest film The Harder They Fall bowing in theaters today, Emmy-nominated actor Jonathan Majors isn’t looking to slow down anytime soon. He is now set to star in Magazine Dreams, the new bodybuilding drama from Elijah Bynum. Bynum is writing and directing, with Majors also set to serve as an executive producer on the project under his Tall Street Productions. The script was included on the 2020 Black List. The film follows an amateur bodybuilder who struggles to find human connection in the exploration of celebrity and violence. Nightcrawler producers Jennifer Fox and Dan Gilroy are on board to produce....
MOVIES・2 DAYS AGO
Deadline

EXCLUSIVE: Sarah Jeffery (The CW’s Charmed), Emmy nominee Jane Adams (Hacks), Jake Weber (Those Who Wish Me Dead) and Balthazar Getty (Twin Peaks) will star in Year of the Fox, the latest feature from award-winning director Megan Griffiths (Lucky Them, Eden, The Off Hours), which has wrapped production in the state of Washington. The film written by Eliza Flug is a fictionalized depiction of teenage experiences and personal encounters she had while growing up in Aspen, Colorado, during the last of its utopian heyday. Set in 1997, it tells the story of 17-year-old Ivy (Jeffery), who was adopted as an infant...
MOVIES・2 DAYS AGO
Deadline

EXCLUSIVE: We have learned that Zachary Quinto, Lukas Gage, Simon Rex, Judith Light and Audra McDonald are set for FilmNation Entertainment’s Rightor Doyle feature directorial debut Down Low.  The news comes in the wake of Rex receiving a Gotham Award nomination in the Lead Performance category for A24 and FilmNation’s Red Rocket and Gage’s HBO series The White Lotus receiving a nomination in the Breakthrough Series – Long Format slot. Newcomer Sebastian Arroyo also rounds out the cast of the comedy feature written by Gage and Phoebe Fisher. Pic, produced by FilmNation Entertainment’s Ashley Fox and Lucas Wiesendanger and Sui Generis Pictures’ Ross Katz, centers around a...
MOVIES・2 DAYS AGO
Screendaily

Newcomer Jamila C. Gray to Star in ‘On the Come Up,’ Directed by Sanaa Lathan (EXCLUSIVE)

Paramount Players has hired newcomer Jamila C. Gray to star in “On the Come Up,” the upcoming film adaptation of Angie Thomas’ New York Times bestselling follow-up book to “The Hate U Give.” Leading an all-Black cast, Gray stars in the Paramount Players movie as Bri, a 16-year-old who wants to become one of the greatest rappers of all time — or, as the film’s longline says, “at least win her first rap battle.” The coming-of-age story follows Bri’s fight to rise to the top, despite the cards being stacked against her. “It’s hard to get your come up when you’re mislabeled...
MOVIES・2 DAYS AGO
thenerdstash.com

The Emmy-winning actress from Netflix’s The Crown, Emma Corrin, will star in FX’s upcoming limited drama series Retreat. The FX series follows a gen Z amateur sleuth, named Darby (played by Corrin). At the invitation of an eccentric billionaire, Darby ventures to a remote resort along with eleven other people. When one of the guests dies, Darby takes it upon herself to prove it was foul play. The rest of the cast has not been announced for FX’s series Retreat.
TV SERIES・12 DAYS AGO
tvseriesfinale.com

Ragdoll is coming to AMC+ next month. The streaming service has released a teaser for the new thriller series which stars Lucy Hale, Henry Lloyd-Hughes, and Thalissa Teixeira. The six-episode season revolves around the murders of six people. AMC revealed more about the upcoming thriller in a press release. “AMC+...
TV SERIES・12 DAYS AGO
Collider

'Tales of The Walking Dead' Anthology Series Greenlit at AMC

AMC Networks announced today that they have greenlit a brand new spin-off series based on The Walking Dead series called Tales of The Walking Dead. The series, which will consist of six episodes, is expected to go into production early next year and premiere on AMC+ and AMC in summer 2022.
TV SERIES・11 DAYS AGO

The “LA Law” sequel series pilot at ABC has cast Corbin Bernsen to reprise his role from the original series. Bernsen joins previously announced returning cast member Blair Underwood. The updated logline for the project describes it as a re-envisioning of the original featuring familiar characters working alongside new ones on the most hot button issues of the day. Bernsen returns in the role of Arnold Becker. A former lothario, Becker hasn’t changed since the 1980s but the world has. Now in his 60s, he struggles with a rapidly shifting sexual and political landscape. “I’ve often thought about revisiting ‘LA Law’ and Arnie...
TV SERIES・5 DAYS AGO
Variety

Michael Gandolfini and Zack Schor have joined the cast of “The Offer” at Paramount Plus, which tells the story of the making of “The Godfather.” “The Offer” is a 10-episode series based on the experience of Oscar-winning producer Albert S. Ruddy (Miles Teller), detailing the behind-the-scenes events of the original 1972 film. Along with Teller, the series will star Matthew Goode as producer Robert Evans, Giovanni Ribisi as Joe Colombo, Colin Hanks as Barry Lapidus, and Dan Fogler as Francis Ford Coppola. Juno Temple also joined the cast as Bettye McCartt, Ruddy’s assistant. Gandolfini will play Andy Calhoun, an unexpectedly savvy businessman on...
MOVIES・2 DAYS AGO
GoldDerby

Six months after she stole the Oscars with her epic walk through Union Station, Regina King brings her trademark charisma back to the screen in Netflix’s “The Harder They Fall.” Directed and co-written by Jeymes Samuel – Boaz Yakin shares screenwriting credit – “The Harder They Fall” is a Western set in the postbellum period that pits Jonathan Majors against Idris Elba in a revenge narrative. Samuel has assembled an impressive cast that also includes Zazie Beetz, Delroy Lindo, Lakeith Stanfield, Edi Gathegi, and others. It opened in a limited theatrical release on October 22 in advance of its November...
TV & VIDEOS・2 DAYS AGO
ramascreen.com

International Max Original KAMIKAZE will debut with two episodes SUNDAY, NOVEMBER 14 in 46 countries and territories where HBO Max is available across the US, Europe and Latin America, marking the first Max Original commissioned and produced in Europe that will stream day and date on HBO Max. Two episodes will subsequently debut each week until December 5 in the US. Check out the official trailer here below!
TV SERIES・9 DAYS AGO

The Emmys of late have become a revolving door of monolith premium, cable, and streaming shows, parading one after another, in and out of vogue. And it seems like there’s always a new powerhouse waiting in the wings to take the crown. It wouldn’t be a problem per say, if it wasn’t for the drastically uneven playing fields. How are network dramas and comedies, with all their FCC regulations and red tape regarding obscenity and profanity, supposed to keep up with the practically unregulated world of subscription TV?
TV SERIES・11 DAYS AGO
Deadline

EXCLUSIVE: Mel Gibson has been set to star in The Continental, the prequel to the Keanu Reeves film series John Wick. The Continental will be presented as a three-night special-event TV series, produced for Starz by Lionsgate Television. The Continental will explore the origin behind the hotel-for-assassins, which increasingly has become the centerpiece of the John Wick universe. This will be accomplished through the eyes and actions of a young Winston Scott, who is dragged into the Hell-scape of a 1975 New York City to face a past he thought he’d left behind. Winston charts a deadly course through the New...
MOVIES・5 DAYS AGO
Variety

In Denis Villeneuve’s “Dune,” Rebecca Ferguson plays Lady Jessica, lover of the world ruler portrayed by Oscar Isaac and matriarch to Timothée Chalamet’s messiah-in-waiting. She is a doting mother who is distracted by the pressures of a royal household, but more importantly, she is  brimming over with a supernatural power that could bring about revolution. That dynamic is not a bad allegory for Ferguson’s career. Having largely served as a second name on the call sheet behind male co-stars in the massive films that pepper her IMDb page, Ferguson has consistently dazzled critics and audiences — emerging as both an anchor...
MOVIES・2 DAYS AGO
Deadline

Veep alum Timothy Simons is set to star opposite Jessica Biel in Hulu’s original limited event series Candy, based on the true story of Candy Montgomery (Biel), who killed her friend Betty Gore (Melanie Lynskey) with an ax. In 1980 Texas, Montgomery seemingly had it all — a loving husband with a good job, a daughter and a son, a nice house in the brand new suburbs — so why did she kill her friend from church? Simons will play Pat Montgomery, a brilliant engineer and loving father and husband to Candy Montgomery, but the events on the morning of Friday, June...
TV SERIES・2 DAYS AGO
tvseriesfinale.com

Temple is returning soon to Spectrum Originals for its second season. The Mark Strong crime drama is returning on November 1st and a trailer has been released. All seven episodes of the season will arrive on that date. Carice van Houten, Daniel Mays, Lily Newmark, Ryan McKen and Tobi King...
TV SERIES・6 DAYS AGO
Variety

Hulu comedy “Dollface” has cast Owen Thiele in its upcoming second season, Variety has learned exclusively. Thiele will appear in the new season as Q, a new Woom employee who becomes the girls’ cooler and younger confidante. Season 2 does not currently have a premiere date, but is expected to debut in 2022. Thiele can currently be seen in Season 2 of “I Think You Should Leave with Tim Robinson” on Netflix. Thiele’s short film, “How Moving,” was selected for the Frameline Film Festival and Outfest. He wrote, directed, and starred in the film. He also co-starred in Cazzie David and Elisa Kalani’s...
TV SERIES・2 DAYS AGO
spoilertv.com

Mel Gibson has been set to star in The Continental, the prequel to the Keanu Reeves film series John Wick. The Continental will be presented as a three-night special-event TV series, produced for Starz by Lionsgate Television.
TV & VIDEOS・5 DAYS AGO
GeekTyrant

Jonathan Tucker (Parenthood, Westworld, Debris) has signed on to star opposite Michelle Monaghan (Kiss Kiss Bang Bang, Gone Baby Gone) in the Netflix limited series Echoes. The mystery thriller was created and written by Vanessa Gazy (Eden), with 13 Reasons Why showrunner Brian Yorkey on board as well. Here’s the...
TV SERIES・2 DAYS AGO