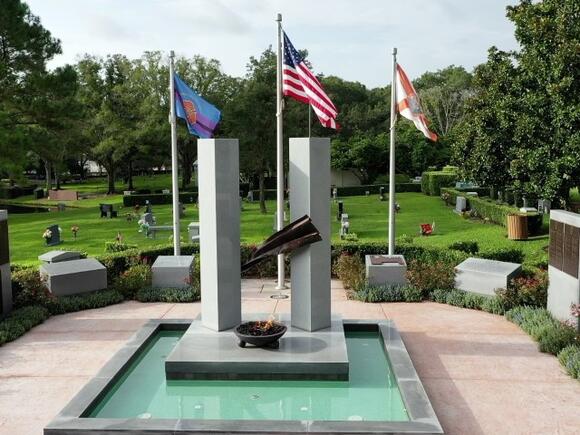 It’s been on the grounds of Curlew Memorial Gardens cemetery since 2012 and started with a request from an elementary classroom and a fire department.

“People come and find it and think, gosh, we didn’t know it was there," said Keenan Knopke, Curlew Memorial Gardens CEO.

When a 5th grade class at Ozona Elementary and the Palm Harbor fire department successfully applied to get a piece of steel from the Twin Towers, the question immediately became what to do with it. That’s when Knopke offered to cover the cost of building a memorial.

“We formed a committee. We met multiple times. The design changed several times. And we eventually ended up with what you have here today," said Knopke.

The twisted piece of steel is floating between a replica of the Twin Towers made using 30 tons of granite. There is also an eternal flame at its base. But what sets this memorial apart is how it honors everyone associated with the September 11th attacks. The firefighters, the police, the civilians, even the rescue and recovery workers who pass away each year.

Every year the committee works to add another feature. There is a memorial decided to those killed in the Benghazi embassy attack on September 11th, 2012 along with a bell from the last wooden ladder fire truck in New York City.

Every year the towers shine lights into the sky and people gather here for the ceremony. This year, the 20th anniversary will be the biggest event yet.

For information on this year's anniversary memorial, click here.

St. Pete business finds themselves in turf war with the city

A St. Petersburg artificial turf company is finding themselves in a turf war themselves with the city.
SAINT PETERSBURG, FL・1 HOUR AGO
ABC Action News WFTS

A Pasco County community is honoring the life of a teacher they lost to COVID-19 complications last year, with a pumpkin patch, and all the proceeds are going back to the profession she loved so much.
PASCO COUNTY, FL・1 DAY AGO
ABC Action News WFTS

Drive down to the end of East Circle Street in Avon Park and you'll find Maxwell Groves. It's the last standing citrus packing house in Highlands County.
HIGHLANDS COUNTY, FL・2 DAYS AGO

Florida Fish and Wildlife is out with a new red tide map as we head into the weekend.
FLORIDA STATE・2 DAYS AGO
ABC Action News WFTS

After nearly a month long search for Brian Laundrie, the FBI announced it located human remains inside the Myakkahatchee Creek Environmental Park in North Port.
NORTH PORT, FL・2 DAYS AGO

As Manatee County grows so does the amount of people who need help, and now the county needs help answering those calls.
MANATEE COUNTY, FL・5 DAYS AGO
ABC Action News WFTS

St. Petersburg Mayoral Candidates Ken Welch and Robert Blackmon have joined local police and community advocates in calling for an end to violence in the city. This comes as the city hits the highest number of homicides in the last decade.
SAINT PETERSBURG, FL・5 DAYS AGO
ABC Action News WFTS

A new law in Florida is taking aim at telemarketers who call or text consumers who didn’t give written permission. Taking Action Reporter Jackie Callaway found a class-action lawsuit filed in Pinellas County will put this new rule to the test.
FLORIDA STATE・5 DAYS AGO

State begins work to improve I-75 interchange in Sarasota Co.

For drivers like Brad Shugart, the simple drive on Clark Road underneath the I-75 overpass can take a frustratingly long time. “It gets really bad. It’s horrible," said Shugart, a small business owner whose work takes him through the interchange multiple times a day. "It’s gotten worse in the last year or two."
SARASOTA COUNTY, FL・6 DAYS AGO
ABC Action News WFTS

A house fire in Sulphur Springs was started by a child, according to the fire investigator.
TAMPA, FL・8 DAYS AGO
ABC Action News WFTS

A man was shot and killed by officers after they said he pointed a military-style rifle at them in Tarpon Springs Saturday night.
TARPON SPRINGS, FL・7 DAYS AGO
ABC Action News WFTS

Make-A-Wish Southern Florida granted a wish for a 6-year-old Sarasota girl who is battling brain cancer.
SARASOTA, FL・9 DAYS AGO