US Open prize money: How much did Emma Raducanu earn after historic win? 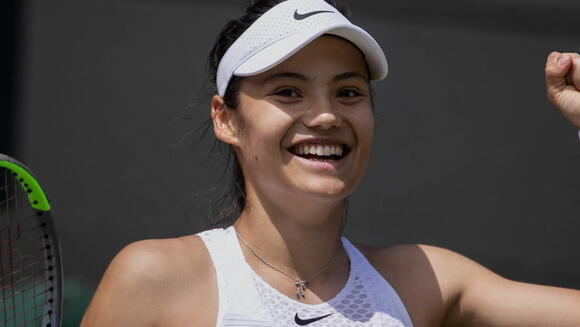 Emma Raducanu ’s stunning run on her first appearance at the US Open finished in glorious fashion as she became Britain’s first female singles Grand Slam champion for 44 years, beating Leylah Fernandez 6-4 6-3 in the final.

Raducanu is also the youngest Grand Slam finalist since Maria Sharapova won Wimbledon in 2004 and the first British woman to reach that height since Virginia Wade won that same tournament in 1977.

The British teenager will earn a life-changing sum of money after winning the tournament. Here’s everything you need to know about the prize money.

The total prize money available for the whole of the 2021 US Open is a record £41.5m, which represents an increase of £216,000 on 2019, the last time the tournament was held in front of a full crowd of spectators.

How much do the men’s and women’s single winners earn?

For 2021 the winners of both the men’s and women’s singles tournaments will win £1.8m each.

That is £360,000 less than in 2020, with the US Open having decided to reallocate funds so that the winners receive a smaller proportion of the total prize pot than in previous years, while those who exit in the earlier rounds will take home a larger purse. The decision was taken in conjunction with the players themselves.

US Open tournament director Stacey Allaster said. “We determined our round-by-round prize money allocations by engaging in an open dialogue with the players and the management of both tours. We applaud their collective leadership in directing the 2021 US Open prize money to benefit the maximum number of players.”

Prize money breakdown for each round

The prize money is the men’s and women’s singles is allocated as follows (rounded to the nearest thousand):

How does the prize money compare with Wimbledon and the other Grand Slams?

Emma Raducanu: Teenager to take on Elena-Gabriela Ruse in an exhibition match at the Royal Albert Hall

British teenager Emma Raducanu will bring her stellar season to an end with an exhibition match against Romanian Elena-Gabriela Ruse at London's Royal Albert Hall later this month. The 19-year-old made history earlier this year when she became the first qualifier to win a Grand Slam when she triumphed at...
TENNIS・13 DAYS AGO
Telegraph

Emma Raducanu has been enjoying her “only holiday in seven years” ahead of her first match on home soil since her US Open victory. The 19-year-old is the star attraction this Sunday as tennis bids farewell to 24 years of annual matches at the unlikely destination of the Royal Albert Hall.
TENNIS・5 DAYS AGO
Telegraph

Emma Raducanu will complete her extraordinary year with a first match in Great Britain since winning the US Open when she plays Elena-Gabriela Ruse in an exhibition match at the Royal Albert Hall later this month. The 19-year-old Briton became the first qualifier to win a major tennis title when...
TENNIS・13 DAYS AGO
firstsportz.com

2021 was Emma Raducanu‘s breakthrough season, and what a season it was. From relative anonymity to absolute stardom, Raducanu saw it all in one year. Winning her first WTA title at the US Open shuttled her through the stratosphere of the tennis world. The teenager who had ended the last season with a ranking of 343 in the world, could have scarcely imagined that in the span of a year, she would have entered the WTA Top 20.
TENNIS・9 DAYS AGO

Jo Durie: I knew Emma Raducanu was talented but didn't expect her to win the US Open

Former British No. 1 Jo Durie believes Emma Raducanu's US Open victory will serve as a motivation to British youngsters. Raducanu, who turned 19 just a few days ago, captured her maiden Grand Slam title at the US Open after winning 10 matches to become the first qualifier in tennis history to win a Major.
TENNIS・8 DAYS AGO
Telegraph

Emma Raducanu's next match: when is it and how to watch on TV

After a breakthrough year in which she reached the fourth round at Wimbledon and won the US Open, Emma Raducanu will finish 2021 by appearing in two exhibition tournaments: the Champions of Tennis tournament at the Royal Albert Hall in London and the Mubadala World Tennis Championship, where Andy Murray is also appearing, in Abu Dhabi next month.
TENNIS・5 DAYS AGO
firstsportz.com

Emma Raducanu entered 2021 as the world no. 343, and she will be exiting it as no. 19. This meteoric rise in ranking is due to her unbelievable performance at the Flushing Meadows in New York. She entered the US Open tournament as a qualifier and went on to lift the trophy without dropping a set. Not only was it the teenager’s first grand slam win, but also her maiden WTA title.
TENNIS・5 DAYS AGO
BBC

US Open champion Emma Raducanu has continued a memorable 2021 by being voted Sunday Times Sportswoman of the Year. The teenager, who turned 19 earlier this month, ended Britain's 44-year wait for a women's Grand Slam singles winner with victory in New York. She had entered the tournament as a...
SPORTS・4 DAYS AGO

Emma Raducanu has been taking advice from Lewis Hamilton on how to cope with life in the spotlight.US Open champion Raducanu made a winning return to Britain at the ATP Champions Tour event at London’s Royal Albert Hall beating Elena-Gabriela Ruse in a not-entirely-serious exhibition match.The 19-year-old was playing on home soil for the first time since her historic Flushing Meadows triumph in September.Afterwards Raducanu revealed Formula One world champion Hamilton has been mentoring her, and even said she was rooting for him to win the BBC Sports Personality of the Year Award, for which she is a...
CELEBRITIES・17 HOURS AGO
Telegraph

Home hero beats good friend Elena-Gabriela Ruse in straight sets. Raducanu playing on home soil for first time since fourth round exit at Wimbledon and US Open win. Gulf in class evident as world No 19 sees off challenge of world No 85. Emma Raducanu has been taking advice from...
TENNIS・1 DAY AGO
The Independent

London's Royal Albert Hall provided a fitting stage on Sunday for teenage tennis sensation Emma Raducanu's first appearance on a British court since her astonishing US Open triumph. Playing 79 days after an extraordinary run in New York culminated in victory over Canada's Leylah Fernandez and coronation as Britain's new...
TENNIS・1 DAY AGO
ESPN

LONDON -- US Open champion Emma Raducanu capped her remarkable debut season with a 6-3, 7-6(3) victory over Romania's Elena-Gabriela Ruse in a light-hearted exhibition match at the Champions Tennis event at the famed Royal Albert Hall on Sunday. Britain's Raducanu, who turned 19 years old earlier this month, was...
TENNIS・1 DAY AGO

WATCH: Crowd goes berserk as Emma Raducanu steps on British court for the first time since her US Open win

Emma Raducanu has made a name for herself in the world of tennis. The youngster from Britain took the world by surprise when she ended up winning the US Open in an emphatic style. As a result, she became the face of many globally renowned brands in no time. Raducanu...
TENNIS・15 HOURS AGO
olympics.com

The US Open champion is still adjusting to the sudden rise to fame after making tennis history as the first-ever qualifier to win a Grand Slam title. The 19-year-old has been receiving incredible support from lots of people to help her deal with the many challenges that come with her new status as Great Britain's tennis darling.
TENNIS・12 HOURS AGO
The Independent

US Open champion Emma Raducanu made a winning return to Britain at the ATP Champions Tour event at London’s Royal Albert Hall, beating Elena-Gabriela Ruse in a not-entirely-serious exhibition match. It was her first match on home soil since July when her Wimbledon debut ended in a fourth-round retirement against...
TENNIS・12 HOURS AGO
San Diego Union-Tribune

Not even Novak Djokovic playing back-to-back could help Serbia avoid losing to Germany in the Davis Cup group phase
SAN DIEGO, CA・2 DAYS AGO
The Independent

Team spirit is once again propelling Great Britain to Davis Cup success as they look to hold off a Germany team on a revenge mission and reach the semi-finals. Britain defeated Germany two years ago in Madrid at the same stage of the inaugural finals week before losing a close contest to eventual champions Spain.
SPORTS・11 HOURS AGO
The Independent

Croatia silenced a boisterous Turin crowd as they edged past Italy 2-1 to become the first team through to this year’s Davis Cup semi-finals.World number ones Nikola Mektic and Mate Pavic clinched the decisive doubles rubber over Fabio Fognini and Simone Bolelli 6-3 6-4 in one hour and 19 minutes.Jannik Sinner had hit back from the brink to beat Maric Cilic and force the decider after the veteran Croatian had served for the match – and the tie – in the second set.The 20-year-old Sinner forced his way into a second set tie-break which he won before ultimately claiming a...
TENNIS・4 HOURS AGO