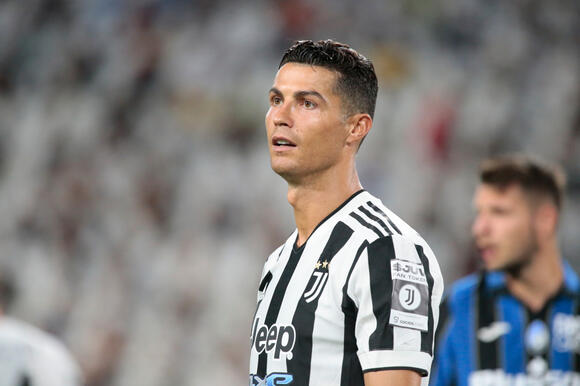 City failed to secure the signing of a new striker during the summer transfer window, with the Blues having not replaced all-time top goalscorer Sergio Aguero - who signed for Barcelona when his contract expired in June.

The Blues were reportedly "confident" of replacing Sergio Aguero with Tottenham and England captain Harry Kane, but the 28 year-old announced that he would remain at the North London club for the 2021/22 season.

Pep Guardiola had uncharacteristically spoken openly about potentially signing Harry Kane before the international break, however the Catalan chose not to do the same when asked about Cristiano Ronaldo on Friday.

Cristiano Ronaldo, who had looked to be on the verge of completing a sensational late transfer to Manchester City, re-signed for city rivals Manchester United on a two-year contract a fortnight ago.

The Portuguese forward had been heavily linked with a move to the reigning Premier League Champions, with some reports even suggesting that Pep Guardiola had personally spoken with Ronaldo about a possible transfer.

However, Pep Guardiola didn't say whether he had spoken to the 36 year-old about a move to the Etihad, as the Catalan told the media, "It's not my business to talk to players of other clubs," when questioned about if he talked with the former Juventus and Real Madrid player.

The Manchester City manager also didn't want to reflect on the club's summer business, with Jack Grealish being the Blues' only arrival.

Asked about Manchester City's transfer business this summer, Guardiola replied, "The window is closed, the subject is over... until the winter time."

The club chose not rival PSG to the signature of Lionel Messi and also didn't challenge the French heavyweights on deadline day, when they signed left-back Nuno Mendes from Sporting Lisbon - despite Manchester City having been heavily linked with the 19 year-old full-back.

Rio Ferdinand admits he 'wouldn't be happy' with Paul Pogba and his recent public outburst had he been his team-mate. The Frenchman spoke candidly in a post-match interview after Manchester United's 4-2 defeat at Leicester City. Speaking to the BBC after their loss at the King Power Stadium - their...
PREMIER LEAGUE・8 DAYS AGO
The Independent

Manchester United 'Call' Manager On The Recommendation Of Cristiano Ronaldo

Manchester United have reportedly got in contact with a manager on the recommendation of star man Cristiano Ronaldo amid uncertainty regarding Ole Gunnar Solskjaer's position at the helm. Pressure is mounting on Solskjaer following his side's crushing defeat last weekend. Man United slumped to their second defeat of the Premier...
PREMIER LEAGUE・8 DAYS AGO
punditarena.com

Paul McShane on Ronaldo influence. Paul McShane has hailed the impact of Cristiano Ronaldo since the Portuguese star’s return to Manchester United. The Wicklow man and Ronaldo were both members of the Manchester United squad in the mid-2000s when the former was a budding defender and the latter was honing the skills that would go on to make him one of the greatest players of all time.
PREMIER LEAGUE・12 DAYS AGO

Manchester United have crashed to an embarrassing 5-0 defeat to Liverpool to pile the pressure on manager Ole Gunnar Solskjaer.Mohamed Salah scored a hat-trick at a shellshocked Old Trafford, with some home fans having already left before a miserable afternoon was made worse by the dismissal of half-time substitute Paul Pogba for a foul on Naby Keita.Here, the PA news agency charts eight other heavy losses United have suffered in the Premier League.Newcastle 5 Manchester United 0, October 20, 1996Philippe Albert’s stunning lob over Peter Schmeichel capped a thumping win as Kevin Keegan’s men gained some revenge having lost the...
PREMIER LEAGUE・2 DAYS AGO
CityXtra

During City's hunt for a striker during the summer transfer window, one surprising name emerged on the list late on the market - Cristiano Ronaldo. The Portuguese international made 292 appearances for Manchester United between 2003 and 2009, which at the time would have certainly ruled him out for ever playing for the Blue half of Manchester at any point in his career.
PREMIER LEAGUE・9 DAYS AGO
CityXtra

Calvert-Lewin is a striker who has been highly-rated for a long while now. His performances for Everton have earned him 11 England caps, and a long list of admirers from across Europe. Recently, the 24-year-old has struggled with a quadricep injury and has not featured for his club since late...
PREMIER LEAGUE・6 DAYS AGO
CityXtra

The 25-year-old spent four seasons at the Etihad Stadium following his arrival from Schalke for a reported fee of £37 million, winning two Premier League titles and other domestic silverware. During his time at the Etihad Stadium, the Germany international played a key role in his side winning back-to-back league...
PREMIER LEAGUE・5 DAYS AGO

Manchester City moved up to second in Group A after they thrashed Club Brugge 5-1 at the Jan Breydel Stadium in Belgium on Tuesday evening. After suffering a 2-0 loss to Paris Saint-Germain last month, Pep Guardiola's squad bounced back to winning ways with a superb victory against the Belgian Pro League side.
PREMIER LEAGUE・6 DAYS AGO
CityXtra

Rodri has shown inconsistent form in his first season as a Manchester City player. However, in the last 18 months, the Spaniard has shown he is fully capable of filling the boots of the soon to be departing Fernandinho in City's crucial holding midfield role. Most recently, Rodri superbly patrolled...
PREMIER LEAGUE・7 DAYS AGO
The Independent

Pep Guardiola has told Raheem Sterling that he does not select players based on "what they have done in the past" after the Manchester City winger revealed he would consider leaving the Etihad in search of regular playing time.Sterling has only started once in the Premier League this season since returning from his starring role with England at the summer's European Championship and revealed this week that he would be "open" to playing abroad one day.The 26-year-old's current Etihad contract is set to expire at the end of the next season and, while there is a willingness on both sides...
PREMIER LEAGUE・11 DAYS AGO
CityXtra

Manchester City moved into second place in Group A with an emphatic 5-1 win over Club Brugge in the Champions League on Tuesday night. Joao Cancelo opened the scoring with a neat finish before Riyad Mahrez converted a penalty just before the break. In the second half, the Blues kept...
PREMIER LEAGUE・6 DAYS AGO

As rumours of a departure for Raheem Sterling continue to circulate owing to a desire to experience more game-time elsewhere, it stands to reason that the club will consider acquiring a like-for-like replacement. The England international is no longer the sure-fire starter that he once was in Pep Guardiola’s side...
PREMIER LEAGUE・5 DAYS AGO
CityXtra

Manchester City were well documented in trying to sign Tottenham Hotspur and England striker Harry Kane to fill the void created by Sergio Agüero's departure. However, as Spurs Chairman Daniel Levy refused to entertain the prospect of allowing his star striker to leave the club, the Blues failed in their pursuit and resultantly headed into the season without a recognised striker in the first-team squad.
PREMIER LEAGUE・6 DAYS AGO
fourfourtwo.com

Manchester United star Cristiano Ronaldo is closing in on 100 goals in the Premier League, across his two spells at Old Trafford. The Portuguese forward managed to score 84 goals in the English top-flight between 2003 and 2009, before departing in a record-breaking transfer move to Real Madrid. Now that he's back in Manchester, however, he's closing in on a century of goals.
PREMIER LEAGUE・12 DAYS AGO
The Independent

Ole Gunnar Solskjaer’s comeback kings did it again as Cristiano Ronaldo secured Manchester United a thrilling 3-2 victory in a breathless Champions League clash with Atalanta There was intense scrutiny on the 1999 treble hero and his players heading into the Group F encounter after Saturday’s embarrassing loss at Leicester compounded recent poor performances.United were staring down the barrel of a fifth loss in eight matches and were booed by some fans as they trudged off at half-time trailing by two goals, only for Solskjaer’s side to storm back memorably at Old Trafford.🔢 Predict how Group F will finish... #UCL—...
PREMIER LEAGUE・6 DAYS AGO
CityXtra

The England international's has seemingly lost his automatic starting berth at the club, and comments recently made by Sterling suggesting that he is open to a move abroad has heightened the speculation surrounding his future with City. Since signing for City in 2015, the 26-year-old has made over 300 appearances...
PREMIER LEAGUE・5 DAYS AGO
fourfourtwo.com

Pep Guardiola has expressed surprise at comments from Raheem Sterling that he would consider leaving Manchester City. The City manager, however, admits he could understand why players would want more game time. Sterling, whose contract at the Etihad Stadium expires at the end of next season, said this week he...
PREMIER LEAGUE・12 DAYS AGO
CityXtra

Charles De Ketelaere is one of the most exciting young talents in European football and owing to his impressive performances for the Belgian club across the previous 12 months, the 20-year-old is believed to be on the radar of many top clubs. The versatile midfielder is a key member of...
PREMIER LEAGUE・5 DAYS AGO
BBC

Manchester City manager Pep Guardiola is pleased to see his team get a win after the international break by beating Burnley 2-0. Watch Match of the Day on Saturday 16 October at 22:30 BST on BBC One, BBC iPlayer and the BBC Sport website and app.
PREMIER LEAGUE・10 DAYS AGO