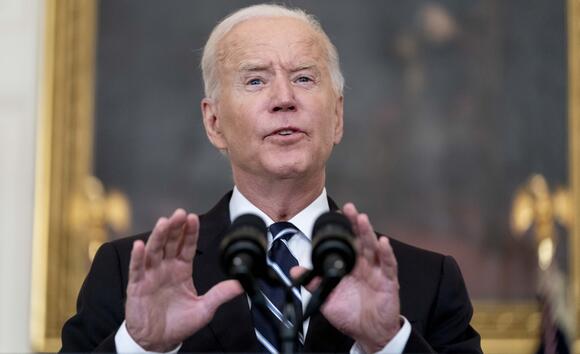 P resident Joe Biden’s Thursday announcement of broad new COVID-19 vaccination requirements has some Arizona officials cheering and others settling in for a fight.

Biden announced a vaccination requirement for employees of any business with more than 100 people, something that’s estimated to be a vaccine requirement for 100 million people. Another estimated 80 million workers who refuse would be subjected to regular testing.

"While America is in much better shape than it was seven months ago when I took office, I need to tell you a second fact, we're in a tough stretch and it could last awhile," Biden said in a speech Thursday afternoon.

Fines for a violation would reportedly be $14,000 per instance.

In addition, Biden announced he would require any federal employee under the executive branch’s umbrella to be required to be inoculated. The same goes for employees of any company that accepts federal contracts.

This marks Biden’s latest attempt at a governmental response to rising infections nationwide largely due to the delta variant of the COVID-19 virus. Even though more than 200 million Americans have received at least one dose of the vaccine, nearly 80 million of those eligible have abstained.

“Joe Biden has failed us on COVID. He ran for office on a promise to ‘shut down the virus.’ He has failed on this, much as he has failed on the border crisis and in Afghanistan. So now, President Biden’s plan is to shut down freedom,” Ducey said in a statement. “These mandates are outrageous. They will never stand up in court. We must and will push back.”

Arizona’s two U.S. Senators were largely quiet on the announcement. Neither office was immediately available to respond to a request for comment, but Sen. Kyrsten Sinema, a Democrat, tweeted, “Arizona – if you haven’t already, today is a great day to get vaccinated.”

"This is the critical action we need to appropriately fight this virus," she said Thursday afternoon. "It’s great to see strong leadership at a time when others have prioritized politics over science. Safety for every resident has & remains my top priority – this requirement will allow us to protect & save lives."

Like others, Attorney General Mark Brnovich questioned the legality of the order.

"President Biden is now taking federal overreach to unheard of levels by dictating vaccine mandates for all private companies with over 100 people, federal contractors, and healthcare providers receiving federal dollars," the Republican tweeted. "I am reviewing his outrageous actions and will take all legal recourse to defend our state’s sovereignty and the rights of Arizonans to make the best healthcare decisions for themselves."

“We must fight this,” he said Thursday.

is this not a Free world no more Is Butface Biden ordering the U.S.A.citizens to get vaccinated by a vaccine that is not a proven medication?

Washington, D.C., will begin offering financial assistance to local organizations that are providing resources to migrants bused to the district from border states, according to an initiative unveiled by the city attorney general Thursday.
WASHINGTON, DC・4 DAYS AGO
WashingtonExaminer

Texas gubernatorial hopeful Beto O'Rourke threw shade on his own party for its hemorrhaging of Hispanic support, arguing Democrats have taken too many voters for granted.
TEXAS STATE・5 DAYS AGO
WashingtonExaminer

How much was former President Donald Trump’s endorsement, plus 27 years as a television news anchor, worth to Kari Lake in her successful bid for the Republican nomination for governor of Arizona? Millions.
5 DAYS AGO

A judge has ordered the release of a man who was arrested almost a year ago after prompting an evacuation on Capitol Hill when he threatened to detonate an explosive device he claimed he had in his truck.
WASHINGTON, DC・4 DAYS AGO
WashingtonExaminer

Following discrepancies in a county council race, Frederick County decided to decertify its results from the primary last month and will rescan its ballots.
FREDERICK COUNTY, MD・5 DAYS AGO

Gov. Greg Abbott (R-TX) announced Wednesday that the Texas Department of Public Safety will provide over 30 law enforcement officers to the Uvalde school district ahead of the 2022-23 school year.
UVALDE, TX・5 DAYS AGO
WashingtonExaminer

Stimulus 2022: Connecticut essential workers eligible for up to $1,000

Essential workers in Connecticut may be eligible for up to a $1,000 payment through a new program established by the state legislature.
5 DAYS AGO
WashingtonExaminer

Social media lit up Wednesday with horror and amazement at a video showing a fire whirl in California.
LOS ANGELES COUNTY, CA・5 DAYS AGO

Google has decided to expand its fiber broadband service after a five-year gap in the program.
NEBRASKA STATE・5 DAYS AGO
WashingtonExaminer

Lawmakers in North Carolina have proposed a $200-per-person tax rebate as a form of relief for high gas prices.
5 DAYS AGO