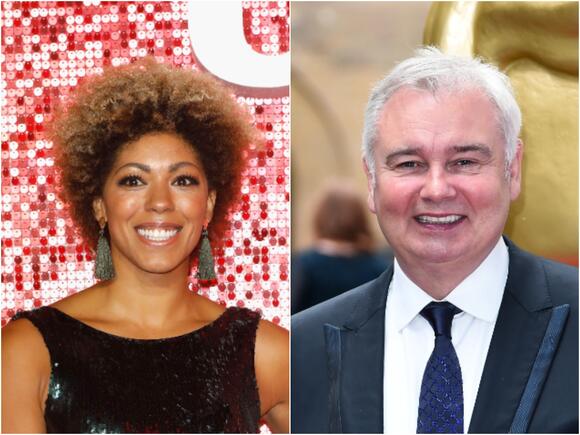 Eamonn Holmes and Dr Zoe Williams have appeared to laugh off the controversial ‘alpaca’ hair comment that Holmes made last month.

Appearing on the red carpet at the National Television Awards together on Thursday night, OK! have reported that the pair joked together and Holmes whispered in Williams’ ear: “I better not touch your f**king hair!”, referencing the incident.

They say she then giggled and replied: “Yes, stay clear of the hair!”

It comes after Holmes was criticised after saying the TV doctor’s hair reminded him of an “alpaca’s” on a segment of This Morning.

Williams, a TV doctor, had been on the show to discuss the latest health headlines. She said she would be talking about “how your health can be benefited from gardening and even alpacas”, prompting Holmes to make the strange comment.

“Your hair reminds me of an alpaca’s today,” he said.

“You just want to pet it, don’t you? It’s very alpacaish.”

Williams then laughed uncomfortably and said “don’t touch my hair!” as Holmes’ wife and co-host, Ruth Langsford shifted in her seat and tried to end the conversation.

Following the incident, Holmes then released an apology statement due to a public backlash in which people told him he was committing a microaggression against black people.

Williams then also released a statement on Instagram saying she had forgiven her friend, though noted the incident had provided her the opportunity to speak out about microaggressions.

Now, it appears the two have put the incident behind them as they interacted at the event last night. Seems like Holmes has learned his lesson.

Eamonn Holmes and wife Ruth Langsford frequently share photos from inside their stylish family home. And now Eamonn has unveiled a new addition to their space. The This Morning presenter, 61, took to Instagram on Sunday evening to reveal a statement piece of artwork - and sparked quite the reaction amongst his fans!
CELEBRITIES・10 DAYS AGO
Hello Magazine

Eamonn Holmes has opened up about staying sober several times in the past, but wife and fellow This Morning and Loose Women star Ruth Langsford doesn’t share the same views, and likely hasn’t been taking part in Sober October. In 2019, Eamonn opened up on Kate Thornton's podcast, ironically called...
CELEBRITIES・6 DAYS AGO
Hello Magazine

Ruth Langsford and Eamonn Holmes have been married for eleven years, and on Friday, Ruth caused hilarity when she teased him after his latest post. Eamonn shared a photo on Instagram of himself surrounded by British Airways air stewardesses, who were part of the Flying Start charity. Flying Start is a partnership between BA and Comic Relief, with 100 per cent of the money raised by the charity being donated to Comic Relief-funded projects. Eamonn had been telling the stewardesses "stories" from his illustrious career, but it seemed to have put them all to sleep.
CELEBRITIES・5 DAYS AGO
Tyla

This Morning's Dermot O'Leary was left red faced on Wednesday, as he unwittingly asked Alison Hammond how she styled her synthetic hair. The ITV hosts were hosting a "curl power" segment, in which they talked about how to style curly hair. And an unknowing Dermot asked Alison how she got...
HAIR CARE・1 DAY AGO

Gordon Ramsay and David Beckham have been friends for years, with their families growing up together, so it's no surprise that the Beckhams are following Tilly's Strictly journey closely. On Sunday, proud dad Gordon took to Instagram to share his pride in Tilly and dance partner Nikita Kuzmin for making...
CELEBRITIES・1 DAY AGO
HOLAUSA

Amara La Negra has always embraced her culture and AfroLatinidad. The multi-hyphenate artist is known for her catchy music, big curly hair, and mesmerizing skin; however, what makes her the most beautiful on the outside, has also made her experience uncomfortable situations. In a recent interview, the 31-year-old singer, reality...
CELEBRITIES・14 DAYS AGO
Hello Magazine

On Friday, Prince William took part in an Instagram Q+A session, answering questions about his Earthshot Prize, which will see a winner announced on Sunday. Although many of the questions concerned the environmental project, the Duke did have to deal with some more leftfield ones, including one about the existence of unicorns. Responding to the question, William chuckled and then spoke about his daughter Charlotte, as he revealed: "Well I think if you talked to my daughter, she'd say they were real."
CELEBRITIES・6 DAYS AGO
Hello Magazine

Celine Dion left fans heartbroken as she announced a devastating health update that ultimately led to some very sad news. The singer shared a statement on her Instagram where she revealed that due to unfortunate developments in her health, the opening of her new Las Vegas residency would be delayed.
CELEBRITIES・2 DAYS AGO

Leni Klum accompanied her dad, Seal, on the red carpet in a rare family outing. The 17-year-old aspiring model walked the red carpet with the musician, 58, for the premiere of the film "The Harder They Fall." The film was written and directed by Seal's (real name Henry Olusegun Adeola Samuel) brother, Jeymes Samuel.
CELEBRITIES・7 DAYS AGO
Essence

After Having Her Marriage Annulled, This 'Married At First Sight' Star Has Found Her 'Soulmate'

After a nightmare marriage that played out on national TV and ended with an annulment, Meka Jones has found love. We love a good happy ending (or a good happy ending in the making). If you’re a devoted Married at First Sight fan, you likely remember Meka Jones. She was...
RELATIONSHIP ADVICE・8 DAYS AGO
TVShowsAce

Talk show host Wendy Williams is furious with her show’s producers. This is because of who they selected to fill in for her. Williams is not happy and she is letting everyone know it. It seems that the talk show host, who has been forced to sit out this season of The Wendy Williams Show due to illness does not approve of TV actress Leah Remini taking over her seat.
CELEBRITIES・2 DAYS AGO
Reality Tea

Real Housewives of Atlanta fans were saddened by the news that NeNe Leakes’ husband, Gregg Leakes, passed away on September 1, 2021, after a courageous battle with colon cancer. A few days prior, NeNe told a group of patrons at her lounge, Linnethia, that Gregg was “transitioning to the other side.” The RHOA star was […] The post NeNe Leakes Shares The Last Words Gregg Leakes, Said Before His Passing appeared first on Reality Tea.
CELEBRITIES・21 DAYS AGO

In a new episode of 'Hello Hunnay with Jeannie Mai', Jeannie, who was molested by a male family member when she was young, reveals that the trauma makes her doubt herself, wondering if she's meant to be a mother. AceShowbiz - Jeannie Mai is opening up in a new video...
FAMILY RELATIONSHIPS・6 DAYS AGO
Cosmopolitan

The City of Lights is having one of the biggest events of the year: Paris Fashion Week is back, and for the past several days, we’ve been fawning over some incredible looks from established and up-and-coming designers. We’ve also spotted a number of famous celebrity kids taking the runway, and showing off their love of fashion, too. But nothing could really top Paris Jackson’s look at Stella McCartney’s fashion show, where the young star’s sartorial statement paid homage to McCartney’s own 1999 Met Gala look.
DESIGNERS & COLLECTIONS・17 DAYS AGO
enstarz.com

Meghan Markle is suspected of hiding her post-pregnancy body by using unflattering, baggy clothes to soften her silhouette. After getting spotted by paparazzi in New York City, a report talked about how the Duchess of Sussex is trying so hard to cover up and hide her figure using strategically picked outfits. However, some of the publications have claimed that Meghan has epically failed to hide anything from the public.
NEW YORK CITY, NY・7 DAYS AGO
flickprime.com

Kourtney Kardashian and Travis Barker’s engagement in Montecito, California was attended by their household and shut ones, together with Khloe Kardashian’s former companion Tristan Thompson. Despite separating from one another, some time in the past, Thompson and Khloe co-parent their daughter, True, collectively. Tristan additionally reportedly walked in with Khloe...
MONTECITO, CA・1 DAY AGO
bravotv.com

Kendall Jenner stunned in a slinky orange and yellow dress as she headed to an event in New York City for her 818 tequila brand. Kendall Jenner has stepped out in a long, sheer dress for a night on the town in New York City. The supermodel was in the Big Apple for an 818 tequila event on October 14, and was spotted leaving her hotel in a slinky orange, yellow and black dress which featured long sleeves. The 25-year-old supermodel paired her colorful, mesh ensemble with clear heels, and a burgundy red purse, as she styled her raven tresses in a sleek blowout.
NEW YORK CITY, NY・6 DAYS AGO
Page Six

Alana Thomspon, also known as “Honey Boo Boo,” has finally gone Instagram-official with her boyfriend, Dralin Carswell, after six months of dating. “🎃🎃 spooky season 🎃🎃,” the reality star, 16, captioned a photo of herself and her 20-year-old beau at a pumpkin patch on Monday. The “Mama June: From Not...
CELEBRITIES・23 DAYS AGO