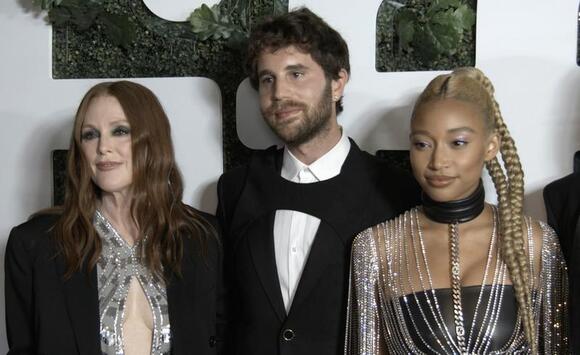 (Reuters) - The Toronto International Film Festival (TIFF) lifted its curtains to a live audience for the first time in two years on Thursday with the world premiere of the musical “Dear Evan Hansen”.

The film, an adaptation of the Broadway production, stars Tony Award winner Ben Platt reprising his role as a high school student with social anxiety who gets caught up in a lie. Julianne Moore, Amy Adams and Kaitlyn Dever are among the cast.

“I love the story very deeply. It’s been very close to my heart for many years so the fact that it’s going so be on such a larger platform and seen by so many is really an exciting gift,” Platt told reporters on the red carpet.

Platt, 27, said he had his own struggles with anxiety and that he had tried to make the character “as human and connected” as possible.

Moore, who plays Evan Hansen’s mother, said she had been a fan of the stage musical for years. “So to suddenly find myself in the middle of this story - how really lucky I was as an actor,” she said.

The Toronto festival will be a mix of in-person and digital events, screening almost 200 films over ten days.

Warwick, Chastain, British actor Benedict Cumberbatch and “Dune” director Denis Villeneuve are among those who will receive honorary awards.

The Toronto festival has traditionally been seen as a showcase for movies that go on to win Oscars, including this year’s best picture winner, “Nomadland.”

Last year’s event was scaled back dramatically, but while film festivals in Cannes and Venice this year had exclusively physical events, Toronto organizers said months ago that they would move forward with a hybrid model.

Films will be shown online and outdoors with some screenings in movie theaters before limited capacity audiences. Attendees must provide proof of COVID-19 vaccination or a negative test before entering a physical venue.

Canada only recently reopened its borders to fully vaccinated American tourists and opened to international visitors two days ago.

Canada is currently experiencing a fourth wave of COVID-19 driven by the Delta variant, despite relatively high vaccination rates nationwide.

After a pandemic-impacted year where the BFI London Film Festival was, like so many others, forced to scale back much of its offerings with very limited in-person events and almost zero international guests, Wednesday night saw the U.K.’s biggest cinema event roar back to life. The Royal Festival Hall, on the banks of the River Thames and a new setting after the festival shifted from its traditional base in Leicester Square, was the location for the grand 2021 revival and where Regina King, Idris Elba, Jonathan Majors, Regé-Jean Page, Ted Sarandos, Jay-Z and, according to reports (she ducked the photographers), Beyoncé,...
MOVIES・14 DAYS AGO
chestertownspy.org

The 2021 Chesapeake Film Festival (CFF) surpassed expectations for an event in the time of COVID, with an overflow-crowd at a VIP reception, hundreds attending the live festival Oct. 1 and 2, and several thousand watching at home during the virtual festival, Oct. 3 through 10. CFF did not host...
EASTON, MD・6 DAYS AGO
GreenwichTime

Bentonville Film Foundation has announced the organization’s 2022 film festival will take place both virtually and in-person. The live event is being held in Arkansas from June 22 through June 26, while the digital portion will extend through July 3. The Bentonville Film Festival, led by actor Geena Davis, has...
MOVIES・2 DAYS AGO
The News-Gazette

The last two weekends at the box office have been dominated by the one-two punch of holdovers “Shang Chi and the Legend of the Ten Rings” and “Free Guy.” But the opening of “Dear Evan Hansen” this past weekend changed that. It knocked “Free Guy” out of the No. 2...
MOVIES・14 DAYS AGO

Dear Evan Hansen: A Movie Review for You

This past Sunday, a few of my friends and I ventured to the Hamilton Movie Theater for the screening of “Dear Evan Hansen.” For those unfamiliar with “Dear Evan Hansen,” it made its original debut on Broadway back in 2016. Starring Ben Platt, the musical was a nationwide sensation, critically acclaimed by many journalists, celebrities and theater-goers. Platt plays Evan Hansen, a teenage boy who struggles with anxiety and depression, in both the Broadway and film version. The story follows Evan and his first few weeks back at school after a long summer. The story unfolds as Evan lies about a friendship he had with a student, Connor, whose tragic and sudden suicide sparks shock to the community. The story continues from there, as Hansen develops a relationship with Connor’s family, playing into the false relationship the two boys had. The topics in “Dear Evan Hansen” bring light to conversations surrounding mental health.
HAMILTON, NY・14 DAYS AGO
edinazephyrus.com

Imagine if you took Jughead’s line “I’m weird. I’m a weirdo. I don’t fit in. And I don’t want to fit in,” from “Riverdale” and made it into a musical movie. And then you took that musical movie and threw an almost 30-year-old man into the lead as a socially anxious high school student fit with a grandma-perm hairstyle and vampire slouch. Then you would be halfway to recreating the mess that is “Dear Evan Hansen.”
MOVIES・14 DAYS AGO
Black Enterprise

‘Dear Evan Hansen’ and Its Problematic Anti-Hero of a Protagonist

Warning to the reader: Major spoilers for “Dear Evan Hansen” ahead. While the odd choice to cast 28-year-old Ben Platt as a high schooler occupied most of the online conversation surrounding “Dear Evan Hansen,” the film presents a much larger problem — Evan Hansen himself. Prior to watching “Dear Evan...
MOVIES・13 DAYS AGO

All events are subject to change due to weather or other concerns. Please check with the venue or organization to ensure an event is taking place as scheduled. The Dallas International Film Festival will include more than 30 feature and short films over three days. The opening night film will...
MOVIES・13 DAYS AGO
Collegiate Times

On Sept. 24, Evan Hansen graced the silver screen for the first time; the 2016 multi-Tony Award-winning Broadway musical “Dear Evan Hansen” was turned into a movie, with Ben Platt starring in the titular role that he originated five years ago. While the original stage version saw widespread success and became a viral sensation, the movie adaptation was not met with the same praise. The tongue-in-cheek charm that made audiences fall in love with the original music was lost in translation, leaving audiences with over two hours of uncertainty surrounding whether or not it was okay to laugh.
MOVIES・11 DAYS AGO
Collider

Editor's note: The following contains spoilers for Dear Evan Hansen.I will be direct, and, unlike Evan Hansen, I will be honest: Dear Evan Hansen is a bad movie. It's misguided at nearly every turn, from its anonymously constructed direction to its morally icky treatment of lies to its central miscasting. A fascinating failure at every turn... emphasis on "fascinating."
MOVIES・12 DAYS AGO
The Independent

Strictly Come Dancing viewers have lavished praise on a musical performance by Ben Platt during Sunday’s (10 October) results show.The Dear Evan Hansen star performed the track “You Will Be Found” from the hit stage and screen musical as part of the annual Movie Week tradition.Viewers shared their reactions to the heartfelt number on social media.“BEN PLATT MAKING ME SOB,” wrote one emotional fan.“Watching #Strictly and seeing how far Ben Platt @BenSPLATT has come since his Pitch Perfect days makes me all warm and fuzzy, he was amazing,” wrote another.“Ben Platt’s voice is just out of this world. GOOSEBUMPS!”...
THEATER & DANCE・11 DAYS AGO

Festival a feast for film enthusiasts

It’s fitting that the 13th annual Santa Fe Independent Film Festival kicks off with Bergman Island, a film about a movie-making couple (Tim Roth and Vicky Krieps) who seek inspiration on Fårö, the Swedish isle where renowned filmmaker Ingmar Bergman lived and worked. The film, which premiered at Cannes in July, screens at 7 p.m. on Wednesday, Oct. 13, at the Violet Crown.
MOVIES・13 DAYS AGO
nnhsnorthstar.com

A non-spoiler free review of the most mediocre movie musical to exist, Dear Evan Hansen

“Cause all that it takes is a little re-in-ven-tion” should not have been the motto of this movie. The movie adaptation of beloved musical Dear Evan Hansen is the definition of mediocre. In an attempt to draw crowds of people who’ve seen the musical along with new fans, they destroyed what once made the story special. Evan becomes the hero nobody wanted him to be.
MOVIES・8 DAYS AGO
Empire

The Phantom Of The Open: An Empire Podcast London Film Festival Special

The BFI London Film Festival is happening AS YOU READ THIS, folks. And, as proud media partners, we at Empire were delighted to present this week's gala world premiere of Craig Roberts' The Phantom Of The Open, a heartwarming and hilarious tale of Maurice Flitcroft (Mark Rylance), a keen amateur golfer who gatecrashed the British Open in 1976 with spectacular results.
MOVIES・8 DAYS AGO
Fandango

What to Watch on Vudu: ‘Blue Bayou,’ ‘Dear Evan Hansen,’ the Best DC Comic Book Movies on Sale and More

Want to know what’s coming soon to digital and what to watch right now on Vudu? Here is your weekly guide to the latest releases:. What are the latest new releases to watch right now?. Blue Bayou, the award-winning immigration drama written and directed by and starring Justin Chon, is...
MOVIES・9 DAYS AGO
Register Citizen

Welcome to this week’s “Just for Variety.” Wonder Woman approves of Robert Pattinson as the new Batman and Zoë Kravitz as Catwoman! “Rob looks amazing,” Gal Gadot told me last night at Elle’s Women in Hollywood event at the Academy Museum when I asked if she had seen the new “The Batman” trailer. “I love his voice and I love the whole tone of everything. “And I love Zoë. She looks incredible. She’s a sweetheart. She’s a talented woman,” she continued. “And I’m so happy to have another female as a comrade.” So when does Gadot think we’ll see an all-female superhero movie with...
MOVIES・1 DAY AGO
wranglernews.com

Evan himself wrote the letter from which comes the title Dear Evan Hansen. Intended as a morale-boosting exercise for the alienated, socially anxious high school kid (Ben Platt), the missive is found on the person of Connor Murphy (Colton Ryan), a seriously disturbed classmate who has taken his own life.
MOVIES・8 DAYS AGO