Pinehurst speeds to a win in Grade I, $300,000 Runhappy Del Mar Futurity 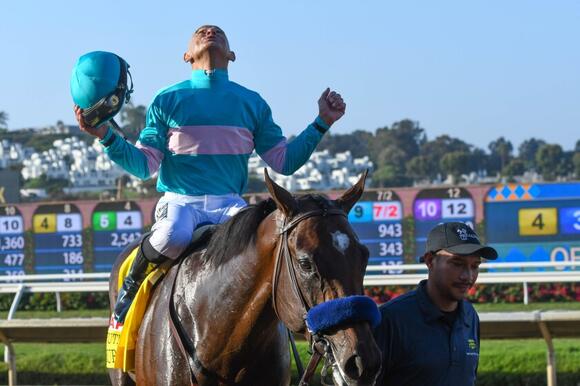 Jockey Mike Smith celebrates his victory aboard Pinehurst (pictured above) in the Grade I, $300,000 Runhappy Del Mar Futurity on Sept. 6, which was closing day for the track’s summer meet.

The 2-year-old bay colt led from start to finish, and was 4 1/2 lengths in front of Finneus at the wire. East Coast-based American Xperiment was another half-length back in third.

Pinehurst completed the 7 furlongs in 1:23.55 over the main track.

“When we ran last time, he (Pinehurst) stumbled pretty badly coming out of there, but he still made the lead,” Smith said. “So I knew he was plenty quick. We beat a horse that day (August 1) named Enbarr, and I knew they were real high on him. So I figured I was sitting on a good horse. When you ride for Bob (trainer Baffert), you ride with confidence. He puts so much foundation under them, and they all come running. So glad I got to win a stakes at Del Mar (this meet), and best to do it with a Grade I.”

In the race prior to the Runhappy Del Mar Futurity, Mackinnon defeated eight competitors in the $102,000 Del Mar Juvenile Turf.

Six other stakes races were contested leading up to the final day of the meet: the $301,500, Grade I TVG Del Mar Debutante (won by Grace Adler); the $254,000, Grade II Caesars Sportsbook Del Mar Derby (None Above the Law, trained by Peter Miller of Encinitas); the $201,000, Grade II John C. Mabee Stakes (Going to Vegas, whose owners include Abbondanza Racing/Bing Bush of Del Mar); the $103,000 Del Mar Juvenile Fillies Turf (Liam’s Dove, trained by Miller); the $102,000 Generous Portion Stakes (Connie Swingle, whose owner and breeder is Nick Alexander of Del Mar and Santa Ynez); and the $100,500 I’m Smokin’ Stakes (Joker Boy).

Although he was away for three weekends during the Del Mar meet to accept assignments in New York and Chicago, jockey Flavien Prat still piloted the most winners, with 47. Miller notched his second straight summer meet training title, with 26 wins from 143 starters. The leading owner for money won and number of wins was Hronis Racing, as it earned $1,020,440 and had eight victories.

Racing will return to the seaside oval on Nov. 3. It will host its second Breeders’ Cup World Thoroughbred Championships on Nov. 5 and 6.

Bob Baffert can enter horses in the Breeders' Cup next month at Del Mar, but the event's all-time money-leading trainer has to meet certain conditions, including stricter out-of-competition testing of his horses and greater security at his barn. The conditions are the result of a review by the Breeders' Cup...
ANIMALS・1 DAY AGO
LEX18 News

Breeders' Cup officials have made the decision to allow Bob Baffert to participate in the 2021 championship.
SPORTS・1 DAY AGO
americanracehorse.com

Del Mar racetrack’s slogan “Where the Turf Meets the Surf” is created because the Del Mar Thoroughbred Club is a horse racetrack located at the Del Mar Fairgrounds in Del Mar, California. Of course, many fans are looking forward to each season, especially this upcoming breeders cup juvenile being held...
DEL MAR, CA・4 DAYS AGO
UPI News

Oct. 11 (UPI) -- Stars such as Letruska and Bell's the One and lots of promising 2-year-olds earned "Win and You're In" spots in next month's Breeders' Cup in weekend racing at Keeneland and Belmont Park. With that action in the books, the preliminaries are almost over. Only one qualifying...
ANIMALS・8 DAYS AGO

Breeders' Cup: A Case Of You heading for Del Mar after Prix de l'Abbaye triumph in Paris

A tilt at Breeders' Cup glory is next on the agenda for A Case Of You following his popular success in the Prix de l'Abbaye on Sunday. Having narrowly missed out on being a first Group One winner for trainer Ado McGuinness in the Flying Five Stakes at the Curragh last month, the son of Hot Streak went one place better on Arc day - sparking jubilant scenes in the ParisLongchamp winner's enclosure.
ANIMALS・14 DAYS AGO

Dubawi Legend put himself in line for a possible crack at the Breeders' Cup Juvenile Turf in Del Mar after a stellar run in the Darley Dewhurst Stakes at Newmarket. Hugo Palmer's unquestionable faith in the two-year-old colt was justified when he was a gallant second to the unbeaten Native Trail in the Newmarket Group One.
ANIMALS・7 DAYS AGO
OCRegister

Support our high school sports coverage by becoming a digital subscriber. Subscribe now. NEWPORT BEACH >> Corona del Mar got off to a slow start in its Sunset League football game against Huntington Beach on Friday at Newport Harbor High School. But the Sea Kings, who are ranked No. 9...
HUNTINGTON BEACH, CA・10 DAYS AGO
kusi.com

HUNTINGTON BEACH– A slew of Chargers made big plays on Friday in a 28-20 victory over CdM. It marked the second straight season in which a competitive win against the Sea Kings locked up the Sunset League silver medal for Edison. Parker Awad threw a touchdown pass each to Nico...
HUNTINGTON BEACH, CA・3 DAYS AGO
scorebooklive.com

HUNTINGTON BEACH– Edison RB Troy Fletcher ran for a 55-yard touchdown and had over 100 yards of offense in the Chargers win against CdM on Friday. He’s also one of their top defensive players at DB, and helped anchor a strong defensive effort in the victory. He caught up with...
HUNTINGTON BEACH, CA・3 DAYS AGO