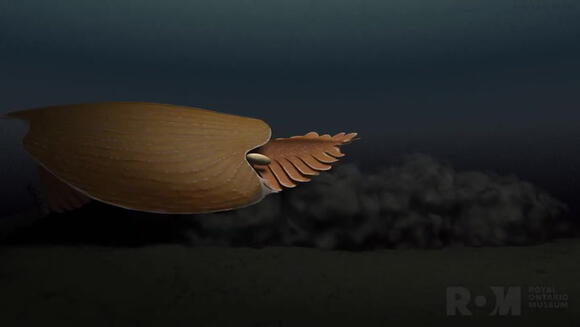 Within the Canadian Rockies , researchers have found fossil fragments of a Titanokorys gainesi - an oddly-shaped, newly discovered sea animal whose head took up almost half of its body.

According to a new study , the creature roamed ocean floors 500 million years ago. It measured roughly 1.6 feet, a massive animal relative to other sea creatures at the time which were just a few inches long.

"The sheer size of this animal is absolutely mind-boggling, this is one of the biggest animals from the Cambrian period ever found," said study author Jean-Bernard Caron, the Royal Ontario Museum’s Richard M. Ivey Curator of Invertebrate Palaeontology, in a statement.

The Cambrian period, dating back 540 million years ago, was a time when an explosion of animals appeared on Earth. This included arthropods, to which Titanokorys gainesi belongs, which have an external skeleton, segmented body, and appendages.

The giant sea animal had alien-like characteristics: a pineapple-sliced-shaped mouth, claws, and large eyes. But what stands out is its “swimming head,” which looks like a dome with spikes.

“The head is so long relative to the body that these animals are really little more than swimming heads," co-author Joe Moysiuk, a doctoral student of ecology and evolutionary biology at the University of Toronto, said in a statement.

The Titanokorys gainesi most likely used its huge, spiky head to dig through the seafloor and capture prey with its claws.

The predator resembles the Cambroraster falcatus which was found in the same area two years ago. Researchers said that creature, which has a helmet-like head, was akin to the Millennium Falcon from Star Wars.

Next summer, the researchers plan to go back to the same area to search for a more complete fossil of the Titanokorys gainesi.

"It’s a bit of a jigsaw puzzle story here, like many of its predecessors and many other radiodonts we’ve found in the past based on fragmentary evidence," Dr Caron told LiveScience .

Nodosaur armor skin that was discovered in 2011 / Royal Tyrrell Museum in Drumheller, AlbertaWikimedia Commons. Usually, when you read about an archeological discovery you expect to see the bones of a dinosaur, but not the intact corpse. What you see in the image above is a nodosaur fossil and the most pristine dinosaur fossil discovered to date. Within the very thick and petrified skin of the dinosaur are also all the bones intact. Paleontologists were sure that they will never see dinosaurs in such good conditions and yet this discovery came as the biggest surprise in the last 150 years of paleontology.
18 DAYS AGO
studyfinds.org

LEIPZIG, Germany — Scientists have unearthed a new type of ancient human who lived more than 7,000 years ago. The remains belonged to a young female buried in a cave on the Indonesian island of Sulawesi, according to the recent study. The international team mapped the girl’s complete DNA from...
WORLD・13 DAYS AGO
ScienceAlert

Astronomers have found a collection of stars doing something unexpected. Within 160 light-years of the Solar System, four red dwarf stars that should be quiet in radio observations have been caught emitting radio signals. According to an analysis of these signals, the best explanation for this activity is the presence of unseen exoplanets. It's not, to be clear, a technosignature hinting at an alien civilization; rather, it seems to be the result of an interaction between the exoplanet and the star's magnetic field, generating intensely strong auroras that can be detected using the Low Frequency Array (LOFAR) – a powerful radio telescope...
ASTRONOMY・14 DAYS AGO
ScienceAlert

Mysterious structures in the sky that have puzzled astronomers for decades might finally have an explanation – and it's quite something. The North Polar Spur and the Fan Region, on opposite sides of the sky, may be connected by a vast system of magnetized filaments. These form a structure resembling a tunnel that circles the Solar System, and many nearby stars besides. "If we were to look up in the sky," said astronomer Jennifer West of the University of Toronto in Canada, "we would see this tunnel-like structure in just about every direction we looked – that is, if we had eyes...
ASTRONOMY・10 DAYS AGO

Late Pleistocene Humans May Have Hatched and Raised “World’s Most Dangerous Bird” 18,000 Years Ago

As early as 18,000 years ago, humans in New Guinea may have collected cassowary eggs near maturity and then raised the birds to adulthood, according to an international team of scientists, who used eggshells to determine the developmental stage of the ancient embryos/chicks when the eggs cracked. Cassowaries are wary...
WILDLIFE・27 DAYS AGO
Outsider.com

For centuries, sailors told tales of monsters lurking in the ocean’s depths. Today, science has largely demystified those monsters. Now, we know they’re giant squid or some form of whale. However, scientific demystification doesn’t make seeing one of these massive creatures any less shocking. Last year, researchers on the Red Sea learned this first hand. Their entire team was stunned to see a massive mystery squid inhabiting a shipwreck.
WILDLIFE・11 DAYS AGO
earth.com

A quadrillion tons of diamonds are beneath Earth's surface

Today’s Video of the Day from the American Chemical Society describes how seismic waves were used to locate trillions of tons of diamonds deep below Earth’s surface. Scientists at MIT estimate that a quadrillion tons of diamonds are located about 100 miles deep in the Earth. This figure, which is one thousand times more than one trillion, is mind boggling.
EARTH SCIENCE・6 DAYS AGO
ScienceAlert

We humans like to take our time when it comes to growing up. Among the great apes, only chimpanzees come close to stretching out the years between key developmental milestones. But even chimps are ready to get crunching with a full set of chompers by the time they're sexually mature. Homo sapiens don't grow their last few teeth until they're nearly out of the teenage years. This mystery of the molars is a tricky one to solve, in spite of their emergence playing such a critical role in tracking shifts in our evolution. But researchers from the University of Arizona in the US...
SCIENCE・18 DAYS AGO

Scientists Just Learned What Can Scare a Killer Whale

Call them killer whales or call them orcas; either way, they’re one of the most fearsome creatures found in the ocean. Given their size and their demeanor, you’d expect there to be very few animals out there that can unsettle a killer whale — and you’d be correct. But that doesn’t mean there aren’t any. And recently, researchers studying orcas off the coast of Iceland discovered something that changed the way they thought of killer whales.
WILDLIFE・27 DAYS AGO
althealthworks.com

Mysterious Honey Discovered That Kills All Bacteria Scientists Throw At It

The health benefits of raw, unprocessed honey are well known, but in Australia, scientists recently made a startling discovery – that one particular, obscure type of honey is capable of killing just about everything scientists throw at it, including some of the worst bacteria known to man. The findings were...
SCIENCE・19 DAYS AGO
healththoroughfare.com

Jaw-Dropping Theory: Was the Universe Created in a Laboratory?

There are plenty of theories trying to describe how our Universe came into being. The Big Bang model is by far the most popular. Some astronomers believe that another Universe existed before our own, that the Universe is one of those forming a Multiverse, and so on. According to Scientific...
ASTRONOMY・10 DAYS AGO
Outsider.com

The ocean is as vast as it is mysterious, with scientists learning something new every day. Sometimes that something new isn’t what they intended to find, however. In this case, scientists investigating a deep-sea shipwreck soon discovered a massive creature right in front of them. Daily Mail UK reports OceanX,...
SCIENCE・16 DAYS AGO
natureworldnews.com

Specialists in Seychelles documented a video from one of the monstrous reptiles pursuing and murdering a defenseless baby bird for the first time. The wholly unprecedented behavior is thought to have been the first time a tortoise has been seen pursuing food source in the environment. Formerly, it was assumed...
ANIMALS・11 DAYS AGO
ScienceAlert

Hidden Forest Has Been 'Trapped in Time' For 100,000 Years, Scientists Say

There's a system of swampy red mangroves, deep in the rainforests of the Yucatan peninsula, that's a long, long way from home. The nearest seashore lies 170 kilometers away (105 miles), and yet these salt-loving shrubs didn't just get up and walk away from the coastline for a fresh drink on the banks of the San Pedro river. Combined genetic, geologic, and botanical research has now confirmed what many locals and scientists have suspected: this was once an ancient saltwater mangrove ecosystem left stranded during the last ice age, when the oceans receded. What we see today is thus the freshwater relic of...
WILDLIFE・19 DAYS AGO
My 1053 WJLT

It's a bird, it's a plane, nope just a bizarre red/orange object in the sky that no one has any idea what it is. Personally, and I don't know why I think it looks like a plane. I mean I can see the wings and the body of the plane. Why it's that color and not a regular color of an airplane, that I can't explain, but it does look like an airplane to me.
ASTRONOMY・17 DAYS AGO
Daily Mail

Earth's hard outer shell 'wobbles' over the eons have occurred to an extent much greater than previously thought, according to a new report. Researchers led by geologist Joe Kirschvink at Tokyo University's Earth-Life Science Institute (ELSI) found evidence in Italy that the Earth's crust tilted 12 degrees south about 84 million years ago.
ASTRONOMY・7 DAYS AGO
ScienceAlert

For The First Time Ever, Evidence of Ancient Life Was Discovered Inside a Ruby

A ruby that formed in Earth's crust 2.5 billion years ago encases evidence for early life, wriggling around in the planet's mud. Trapped within the precious stone, geologists have identified residue of a form of pure carbon called graphite that, they say, is most likely biological in origin, the remains of some ancient microorganism from the time before multicellular life emerged on Earth. "The graphite inside this ruby is really unique. It's the first time we've seen evidence of ancient life in ruby-bearing rocks," said geologist Chris Yakymchuk of the University of Waterloo in Canada. "The presence of graphite also gives us more...
SCIENCE・3 DAYS AGO
Business Insider

Paleontologists found 100 eggs and 80 skeletons from a dinosaur called Mussaurus at a site in Patagonia, suggesting the animals lived in groups.
WILDLIFE・2 DAYS AGO
Space.com

What if the universe had no beginning?

In the beginning, there was … well, maybe there was no beginning. Perhaps our universe has always existed — and a new theory of quantum gravity reveals how that could work. "Reality has so many things that most people would associate with sci-fi or even fantasy," said Bruno Bento, a...
ASTRONOMY・12 DAYS AGO
USA TODAY

An area expected to have ice as thick as 16-feet had a hole in it due to extreme wind, causing concern as to if the ice is thinning.
SCIENCE・6 DAYS AGO