The Range Rover Shooting Brake is an automotive anomaly that is rarely seen out in the wild. The British marque workshopped just six prototypes in its history, and now one has just popped up for auction.

The delightfully retro wagon, which will go under the gavel at Bonhams this September, comes with a backstory that is just as unique as its elongated silhouette. In fact, this was the automaker’s attempt to turn its iconic SUV into an emergency vehicle.

Range Rover’s special projects division commissioned and designed a dozen such models throughout the ‘70s, each with a stretched chassis that was intended to make them more suitable for use as an ambulance. According to the auction house, only two—possibly three—still exist, rendering this experimental 4×4 exceptionally rare.

This particular example, chassis number 355-04063A, is one of two “ambulances” that were built in 1972. Characterized by a distinctive stepped roof and long 10-foot wheelbase, the all-white brute actually started out as a demonstrator car. It was then sold to the St John Ambulance Brigade in 1973 where it remained in service for some 44 years.

Ready for retirement, the vintage ride was snapped up by the current owner in 2017. The following year, it was treated to an extensive restoration by the Range Rover specialists at Bishops 4×4 in Yaxley and was converted to an eight-passenger shooting brake configuration. It has since been dry stored and remains in near excellent condition, according to the owner.

Although it never quite caught on, the Shooting Brake represents a significant part of Range Rover’s history and helped shape the SUVs that followed. Indeed, the wagon’s distinctive stepped roof would later be revived for Land Rover’s first Discovery model.

Check out more photos below: 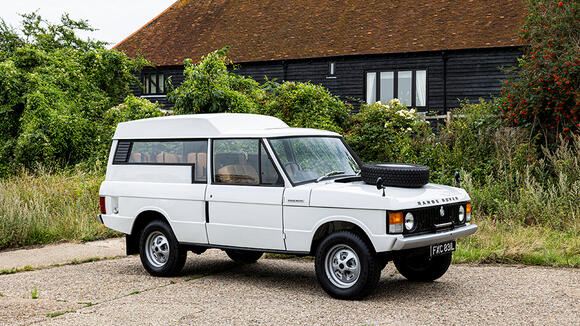 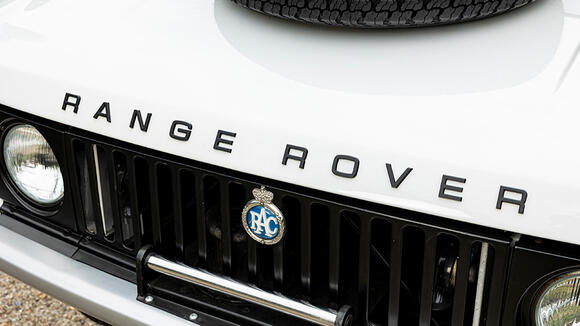 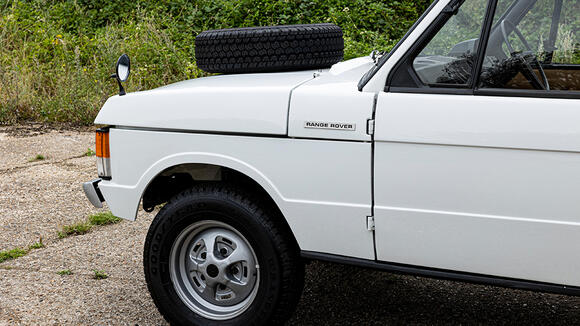 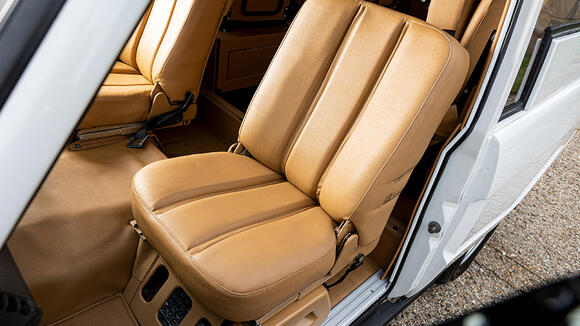 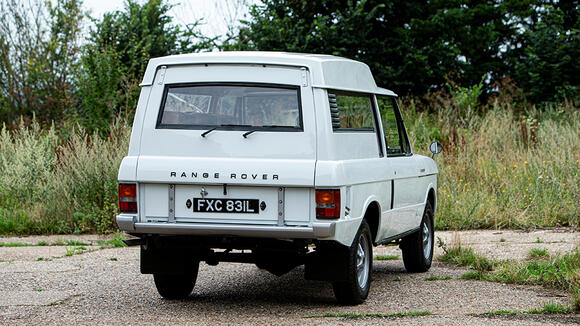 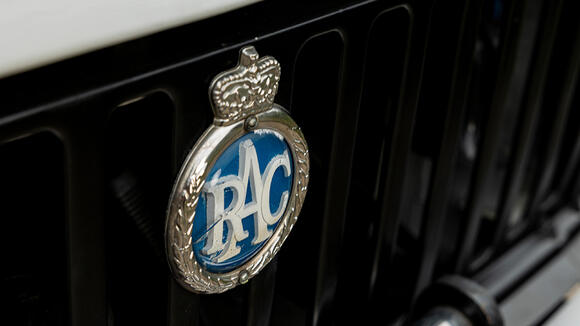 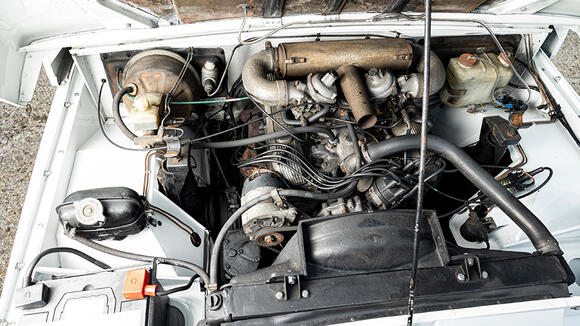 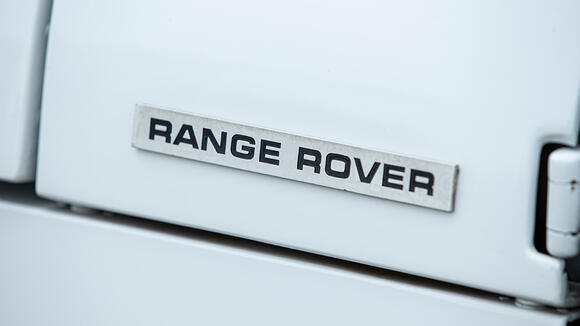 An automaker has rarely gotten things as right with a car as Mercedes-Benz did with the 300 SL Coupe. That didn’t stop the marque from continuing to tinker with its design. Now a gorgeous example of its convertible successor could be yours. A silver 1957 300 SL Roadster has just been listed for private sale in Monaco by RM Sotheby’s. It may lack the iconic gullwing doors of its predecessor, but the fully restored speed machine is still mid-century auto design at its best. Introduced in 1954, the 300 SL Coupe is widely viewed as one of the most beautiful sports cars...
BUYING CARS・7 DAYS AGO
Robb Report

This Ultra-Rare Ferrari F40 Berlinetta Could Fetch $1.7 Million at Auction This Weekend

For a not-insignificant number of auto enthusiasts, no vehicle—supercar or otherwise—can compare to the Ferrari F40. If you’re among them, you might want to figure out a way to get to Belgium this weekend. On Sunday, Bonham’s will offer a barely touched, one-owner 1989 F40 Berlinetta as part of the Zoute Sale auction in Knokke-Heist. The gorgeous speed machine has spent much of the last three decades in dry storage—meaning you’d be hard-pressed to find a better-preserved example of the car on the secondary market now … or ever. Introduced in 1988, the F40 was meant to be a celebration of Enzo...
BUYING CARS・10 DAYS AGO
Robb Report

A One-of-a-Kind Ferrari LaFerrari Coupe Could Fetch up to $3.4 Million at Auction

Ferraris don’t come much rarer than the LaFerrari. Still, an example going up for auction in the UK next month is a true one of a kind. That’s because the 2016 model scheduled to hit the block as part of RM Sotheby’s upcoming London sale is the only version of the gorgeous coupé to feature a Vinaccia exterior over a Pelle Chiodi Di Garofano interior. Of course, even without that one-of-a-kind livery, this barely touched example of the Prancing Horse’s 1-of-499 hybrid would be worthy of your attention. Introduced in 2013, the limited-run LaFerrari was the marque’s first attempt at a hybrid....
BUYING CARS・12 HOURS AGO
Motor1.com

The next-generation Land Rover Range Rover is under development, and a new spy video has captured a long-wheelbase variant testing at the Nurburgring race track. The video shows the large SUV still covered in a full-body camouflage wrap, though the design underneath isn’t expected to diverge much from the current-generation’s upright and luxurious design. The video shows Land Rover really pushing the Range Rover around the track.
CARS・14 DAYS AGO

Land Rover is working on a redesign for its Range Rover and the latest spy shots show a prototype for the long-wheelbase variant. The prototype can clearly be identified by its stretched wheelbase and rear door. The previous long-wheelbase Range Rover was about eight inches longer than the regular model and the same is probably true for this new generation. It should also be differentiated from the regular model by more luxurious appointments in the cabin.
CARS・14 DAYS AGO
AutoExpress

When Land Rover introduced the Range Rover Velar in 2017, few realised the name’s significance. Velar was the codename for the original Range Rover, launched in 1970 and often seen as the first luxury SUV. It wasn’t, because the first cars weren’t all that luxurious, and the Jeep Grand Cherokee...
BUYING CARS・6 DAYS AGO
MotorAuthority

Land Rover has introduced few updates to its Discovery line since 2021's mid-cycle refresh. That changes with the arrival of the 2023 Discovery which features a new range-topping grade dubbed the Metropolitan Edition. Unveiled on Thursday, the Discovery Metropolitan groups together several of the seven-seat crossover's popular styling and technology...
CARS・4 DAYS AGO
gtspirit.com

This is the all new Lexus LX J300, the 3rd generation LX model which shares the GA-F platform with the new Toyota Land Cruiser 300. Both have cars only have a couple of months between them, sales for the C300 have began already while those of the LX J300 will begin next year in Japan.
BUYING CARS・3 DAYS AGO

Do you want to get behind the wheel of a large luxury SUV that offers a premium driving experience and off-road capabilities? Take a look at this 2022 Lexus LX 600 vs. 2022 Land Rover Range Rover head-to-head comparison. See which vehicle wins the luxury SUV fight. 2022 Lexus LX...
CARS・19 HOURS AGO
Robb Report

Car of the Week: This Highly Coveted BMW ‘Batmobile’ Would Make the Caped Crusader Green With Envy

In the late 1960s and early 1970s, long before BMW became a mass-luxury brand name, the marque was known for building sporting cars that combined Bavarian frugality, solid German engineering and—if one squints one’s eyes and imagines—sober, attractive style. The automaker had shed its reputation for lavish antiquated barges like the model 502 “Baroque Angel” and the money-losing 507 sports car, and embarked on a new mission. Pivotal to the change in direction was the 1600 and 2002 series (an altogether longer and most interesting story). But BMW customers had a taste for sporting luxury that would never be sated by...
CARS・23 HOURS AGO
Robb Report

The legendary “pigeon’s blood” ruby is poised to make a giant splash at Christie’s this fall. Two pieces of high jewelry featuring the exceedingly rare red gemstone will go under the gavel at the Hong Kong Magnificent Jewels auction on November 28. According to the auction house, the rarities are expected to ignite fervent bidding among collectors and fetch in excess of $4 million each. For the unversed, the pigeon’s blood ruby is the most coveted of all rubies. The moniker, which is believed to have originated in Myanmar, points to the gem’s vivid crimson hue that is said to mirror the...
DESIGNERS & COLLECTIONS・7 DAYS AGO
Robb Report

More than a dozen artworks by boxer Muhammad Ali sold in a New York auction on Tuesday for nearly $1 million. The auction, held by Bonhams at its Park Avenue headquarters, included 26 little-known drawings and paintings that Ali made in the 1970s. They sold for a total of $945,500. Ali’s Sting Like a Bee (1978), an image of Ali’s boxing-ring victory, set a record for the athlete’s art, selling to a British collector for $425,000. The price was 10 times the low estimate of $40,000. He made the piece while filming the 1979 movie Freedom Road in Mississippi. Elsewhere in the sale, a 1979 painting on canvas...
VISUAL ART・11 DAYS AGO
Robb Report

A landscape scene by van Gogh sold under duress by its original German-Jewish owner and looted from another in the years leading up to World War II is coming to auction. It will be auctioned next month on November 11 in New York as part of the $200 million impressionist collection of Texas oil magnate Edwin Cox, who died in November 2020. The money from the sale will be included in a settlement agreement to the heirs of Max Meirowsky, Alexandrine de Rothschild and representatives for Cox’s estate. Van Gogh’s Meules de blé (1888) is a work on paper depicting an outdoor scene of...
VISUAL ART・3 DAYS AGO
Robb Report

It turns out Toyota’s 300-Series Land Cruiser is coming to the US after all—just not as a Toyota. The redesigned version of the beloved SUV will arrive stateside in the form of the new Lexus LX 600, the brand announced on Wednesday. The luxury marque’s version of the vehicle is almost identical to its parent company’s 4×4 only with more fancy bells and whistles. American off-road enthusiasts were distraught to learn that Toyota would stop selling the Land Cruiser here following the 2021 model year. Luckily, if you can get past the different nameplate, the LX 600 is just a Land Cruiser...
CARS・4 DAYS AGO
BBC

A rare early 20th Century Steiff teddy bear has been sold at auction for £3,200. The 114-year-old, German-made toy had attracted interest in bidders from the USA and France. Toy and collectables specialist Vectis, in Thornaby, Teesside, said there were six commission bids, four telephone bids as well as internet bids.
PETS・13 DAYS AGO
SFGate

Rare Grateful Dead instruments, collectibles and T-shirts go up for auction on Sotheby's

The Grateful Dead have long been synonymous with San Francisco counterculture, and their fan base is one of the most devoted in all of rock 'n' roll. Across the city, there are dozens of places where you can score a Dead T-shirt, but now thanks to auction house Sotheby's, hardcore fans can purchase a shirt that was worn by Ron "Pigpen" McKernan at Sound Storm in 1970, as well as hundreds of other items of Dead memorabilia.
SAN FRANCISCO, CA・11 DAYS AGO
Robb Report

These Diamond and Emerald Specs Were Made for an Indian Prince. They Could Get $7 Million at Auction.

For a few million, you can find out what the world looks like through actual diamond lenses. Sotheby’s is offering two pairs of incredible gem-encrusted spectacles at its bi-annual Arts of the Islamic World & India auction in London on October 27. The outlandish specs, which each carry a high estimate of £2.5 million (approximately $3.4 million at the current exchange rate), come with an incredible backstory that’s just as complex and unique as the eyewear itself. Scholars believe both pairs were commissioned by an Indian prince during the 17th century. To start, an artisan shaped two pairs of glasses out of...
BEAUTY & FASHION・10 DAYS AGO
CNBC

WASHINGTON – An exceptionally rare bottle of Champagne is headed to auction. Christie's London will auction a collection of vintage Champagne from Perrier-Jouet on Dec. 2 and 3. Among the cuvees stands an 1874 vintage of Perrier-Jouet Brut Millesime that is expected to fetch up to $20,000. More than a...
DRINKS・3 DAYS AGO
neusenews.com

Any questions please feel free to call or stop by!
KINSTON, NC・14 DAYS AGO
BBC

Rare Mughal era spectacles to be auctioned by Sotheby's

A pair of rare diamond and emerald spectacles from an unknown Indian princely treasury will be sold at an auction in London later this month. The lenses were placed in the Mughal-era frames around 1890, according to auction house Sotheby's. The spectacles will be offered at auction for £1.5m-2.5m ($2m-$3.4m)...
BEAUTY & FASHION・11 DAYS AGO