Emmy spotlight: Cecily Strong (‘Saturday Night Live’) did it her way in Season 46 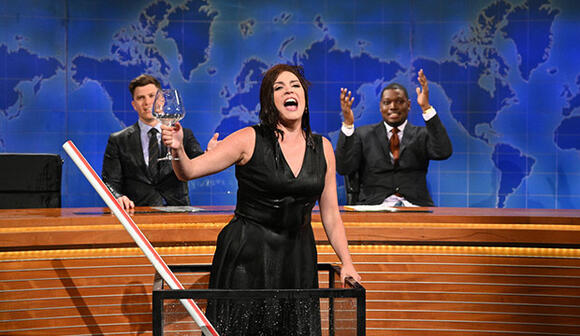 Despite being on “ Saturday Night Live ” for nine seasons, Cecily Strong collected only her second Emmy nomination this year for her work on the NBC sketch comedy. For too long, Strong went underappreciated for her razor-sharp impressions of famous figures like Melania Trump, Tulsi Gabbard, Olivia Colman, Marjorie Taylor Greene, and arguably her most notable , Judge Jeanine Pirro . She’s also proven her chops as an actress over the years, creating memorable original characters from the ground up, like Gemma, Cathy Anne and The Girl You Wish You Hadn’t Started a Conversation with at a Party.

Strong was missing from the first six episodes of the season to film “Schmigadoon,” a musical comedy series that recently finished airing its first season on Apple TV+. She returned in December for the Jason Bateman -hosted episode where she didn’t miss a beat, performing a Judy Garland -esque duet with Bowen Yang in a cabaret sketch. She would go on to deliver laugh-out-loud impressions of Greene, Pirro and Donald Trump ‘s former attorney, Sidney Powell , nailing not only their highly specific voices but mannerisms.

The Pirro piece during the final Weekend Update segment of the season quickly turned into Strong’s most viral moment of the year. The bit begins with Pirro railing against the new presidential administration, sloppily spilling her red wine all over anchor Colin Jost while making increasingly incoherent points. She then performs a cover of Frank Sinatra ‘s “My Way,” and not to be outdone, submerges herself in an enormous tub of wine and completely douses Jost with a full glass of wine from behind. It is a tour de force that became the comedic high point of the season finale, and likely secured Strong’s nomination at the Emmys.

But can Strong pull off a big Emmy win ? No cast member has won an Emmy for “SNL” since Kate McKinnon ‘s back-to-back wins in 2016 and 2017, though the series continues to pull off wins in the guest categories. “Ted Lasso” standout Hannah Waddingham is the overwhelming favorite to win Best Comedy Supporting Actress, according to our latest odds , while Strong is in third place, behind another Hannah, Hannah Einbinder in “Hacks.”

What may help Strong pull through is the urgency of this potentially being her final season on “SNL,” which has not been confirmed but the finale seemed to suggest. Voters who also watched “Schmigadoon,” which will be eligible at next year’s Emmys, may be impressed with Strong’s versatility and send enough voters her way to make this a closer race than many are expecting.

PREDICT the 2021 Emmy winners through September 19

Saturday Night Live last week returned to television screens for its 47th season. The long-running comedy sketch show was beamed across America from New York once again and begun on 2 October. The show continues this week on 9 October, airing in its usual slot of 11.30pm EST on NBC....
TV SHOWS・12 DAYS AGO
arcamax.com

NEW YORK — For her next big gig, Cecily Strong will be working almost every day of the week. The “Saturday Night Live” breakout is set to make her New York stage debut in an off-Broadway production of “The Search for Signs of Intelligent Life in the Universe,” Jane Wagner’s classic 1977 solo play that starred Lily Tomlin and which was later adapted into a 1991 film.
NEW YORK CITY, NY・15 DAYS AGO
FanSided

Saturday Night Live has been steadily building momentum through the first two episodes of season 47. Will SNL keep the ball rolling tonight or is it time for the first break of the season?. Things got off to a less-than-ideal start in the season 47 premiere hosted by Owen Wilson....
TV SERIES・11 DAYS AGO
Esquire

If you’ve never been a fan of Jason Sudeikis as the good-natured, friendly soccer coach Ted Lasso, then last night’s episode of Saturday Night Live will be right up your alley. The former castmate returned to studio 8H to host SNL and brought with him some of his most loathsome characters and outrageous antics that made him such a memorable part of the cast almost a decade ago.
TV & VIDEOS・3 DAYS AGO

Friendship on set! For Kenan Thompson, getting to see his friend Pete Davidson return to Saturday Night Live was “definitely” the perfect introduction to season 47. “[I am] beyond happy. I love Pete, he’s my baby brother. I watched him grow in the business, but as well as an individual and a person,” Thompson, 43, exclusively told Us Weekly while promoting his partnership with AutoTrader on Thursday, October 14. “I just think he does have the talent at the end of the day to take him wherever he wants.”
TV & VIDEOS・12 DAYS AGO
The Independent

SNL: Who is hosting Saturday Night Live this week?

Saturday Night Live is back with four first-time hosts. Kim Kardashian West, Rami Malek and Owen Wilson have already hosted the first three episodes of the season but this week (October 23) Ted Lasso himself Jason Sudeikis will host with Brandi Carlile performing.Wilson, Kardashian West, Malek, and Sudeikis will all be first-time hosts.Saturday Night Live returned on 2 October on NBC in the US after a summer hiatus. This is the show’s 47th season.pic.twitter.com/5E6HS5YnrC— Saturday Night Live - SNL (@nbcsnl) September 22, 2021Kardashian West shared SNL’s announcement of her hosting gig on Twitter, writing: “OMFG no turning back now!!!! LOL I’m hosting SNL!!!!!!”SNL recently won the Emmy for Outstanding Variety Sketch Series at the 2021 ceremony. Sudeikis won Outstanding Lead Actor In A Comedy Series for Ted Lasso, which was also crowned Outstanding Comedy Series. Read More SNL: How much do the cast get paid?
TV & VIDEOS・4 DAYS AGO
Vulture

Rami Malek makes his hosting debut after starring in No Time to Die, the latest James Bond movie. I anticipate SNL playing with Rami’s weirdness (they played with his piercing stare in the teaser). However, Oscar winners like Malek typically bring a new dimension to SNL and surprise audiences with their range, often leading to very fun sketches. Also, no sketch ever suffers from good acting, and likely we’ll see Malek commit really hard without playing for laughs.
NFL・10 DAYS AGO
thesagonline.com

“It’s really special to be back in the studio, I mean this place is historic, ok? Just look around… Think about all the brilliance that’s happened here. All your favorite sketches, Wild Crazy Guys, Gilly, Cowbell, Wayne’s World, all happened in here where you are.”. –Jason Sudeikis, 10/23/21. This episode...
TV SHOWS・2 DAYS AGO

Before becoming the Duchess of Sussex, Meghan Markle initially rose to prominence through her time in Tinseltown. Starring as Rachel Zane in USA Network's "Suits," the former actor appeared in the show's first seven seasons before uprooting her life for royalty. She has also made appearances in prominent programs such as "90210," "CSI: NY," and "CSI: Miami," along with film appearances in "Get Him to the Greek" and "Horrible Bosses."
CELEBRITIES・15 DAYS AGO
nickiswift.com

What Were Alec Baldwin's First Words After He Fired A Prop Gun That Killed Someone?

The world is in shock after actor Alec Baldwin shot and killed cinematographer Halyna Hutchins and injured director Joel Souza on the set of "Rust" with a prop gun. The incident occurred in New Mexico, where the film was being shot, per CNN. Hutchins was immediately transported to the University of New Mexico Hospital, where she later died from her injuries. Director Souza is undergoing medical assistance at Christus St. Vincent Regional Medical Center in Santa Fe.
CELEBRITIES・5 DAYS AGO
Shine My Crown

Candace Owens refuses to show any compassion for Hollywood actor Alex Baldwin after he fatally shot and badly injured two crew members after firing a prop firearm on the set of the movie "Rust" in New Mexico.
CELEBRITIES・4 DAYS AGO
extratv

These are the first images of a distraught Alec Baldwin following an accidental shooting on the set of his new movie “Rust” at Bonanza Creek Ranch in Sante Fe, New Mexico. One photo shows the actor appearing shaken and holding a mask as he speaks on the phone. In another image, he’s doubled over on the side of the road.
PUBLIC SAFETY・5 DAYS AGO

Hilaria Baldwin broke her silence regarding the accidental shooting of Halyna Hutchins that involved her husband, Alec Baldwin. Hilaria took to Instagram on Monday where she shared a note expressing her condolences to Hutchins’ family and noted that her thoughts are with them as well as her husband amid the tragedy.
CELEBRITIES・2 DAYS AGO
TVShowsAce

Candace Cameron Bure spoke out about being a conservative in Hollywood. Meanwhile, some of her friends are jumping ship from the Hallmark Channel to the GAC Family. She always praised the network for being family-friendly. It’s also the very home where she became the so-called Queen of Christmas. But is...
TV & VIDEOS・10 HOURS AGO
UPI News

Alyssa Milano says Tony Danza will take care of her kids in new 'Who's the Boss?'

Oct. 27 (UPI) -- Alyssa Milano discussed the in-development reboot of Who's the Boss? and what fans can expect to see on the series while appearing on The Drew Barrymore Show on Wednesday. "I'm really excited for what we can do with this potential reboot, it's really exciting," Milano said...
CELEBRITIES・11 HOURS AGO
Insider

Katie Couric met Diana as she was finalizing her divorce from Prince Charles in 1996, and said she "sensed a deep sadness" from the princess.
CELEBRITIES・12 HOURS AGO
Insider

Barbara Corcoran made a fat-shaming joke directed at Whoopi Goldberg on "The View" Thursday. Goldberg's cohost Ana Navarro was quick to come to her defense as Goldberg appeared stunned. "I made a joke at Whoopi's expense, which I now realize wasn't funny," Corcoran later said. Whoopi Goldberg was stunned into...
CELEBRITIES・20 DAYS AGO
GOBankingRates

How Much is Katie Couric Worth?

Katherine "Katie" Anne Couric is one of the top personalities in the TV news industry, according to Biography. Most notably known for her 15-year-sting on NBC's "The Today Show," she has broken many...
CELEBRITIES・8 DAYS AGO
Hello Magazine

Social media personality Olivia Jade's journey on Dancing with the Stars has been quite the rollercoaster, starting slow but eventually becoming one of the favorites to win with professional partner Val Chmerkovskiy. However, the beauty influencer had an emotional moment on the show's newest episode as she recalled their lowest...
TV & VIDEOS・1 DAY AGO