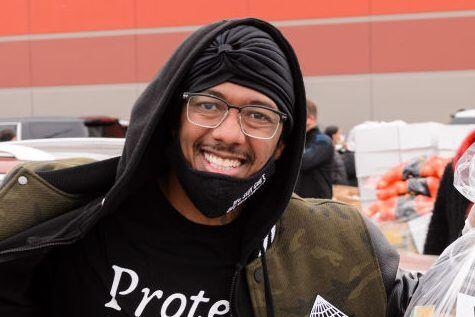 Nick Cannon is absolutely lucky to be making so many kids and not only does he claim that he’s far from finished fathering so many cuties, he’s giving away his unconventional insemination secret.

The 40-year-old father of seven told T MZ on Tuesday that he’s open to having even more kids if it’s meant to be. “God willing,” Nick told a TMZ reporter as he was out and about in New York City. When asked what his secret to shooting and scoring in so many women’s wombs Nick gave the credit to his “aura” and “essence” for allowing him to be so fertile.

“It’s just love, it’s the aura, it’s the essence! If God sees it that way, then that’s what I’m gonna keep doing.”

As of right now, Nick has seven kids with four different women, four of which arrived within one year of one another.

The television host’s oldest are twins Moroccan and Monroe, 10, with ex-wife Mariah Carey , whom he divorced in 2016.

His son Golden, 4, and daughter Powerful Queen, 8 months, are with model Brittany Bell .

and a son, Zen, with model Alyssa Scott.

In related news, Abby De La Rosa revealed she and Nick manifested his latest set of identical babies, which actually backs up his philosophy of allowing God to keep him fertile.

“First pregnancy, April 2020, was definitely not planned, but Nick was such a great friend to me and just so good to me, and then our focus became to have a baby,” the DJ told fans on her Instagram stories.

“Little did we know we would end up having twins. But yes, it was planned.”

“Let me just add that this planning wasn’t like us sitting down with a calendar and being like, ‘You gotta be pregnant by this date,’ ” she continued. “It had already been a thought and it happened. It had already been out there, it was something we were manifesting and we were just letting it flow.”

Neil Patrick Harris and his husband David Burtka celebrated seven years of marriage. So, naturally, when we had the chance to sit down with the How I Met Your Mother star, we asked him for his tips for a successful relationship. Harris recently spoke with us to discuss his latest...
RELATIONSHIPS・8 DAYS AGO
HelloBeautiful

Angela Bassett shared picks of her new wax figure with fans on social media and it looks so real that many can't tell who is who!
CELEBRITIES・28 DAYS AGO
Distractify

Fans Think Nanny Faye Might Be Dead But Here's the Truth

Fans of Chrisley Knows Best it wouldn’t be one of the best reality TV shows to watch right now if it wasn’t for Nanny Faye. There’s something so lovable, witty, and charming about the breakout star!. Is it because it’s hilarious to watch her sneak away to the casino to...
CELEBRITIES・23 DAYS AGO
hotnewhiphop.com

It seems obvious that hiking isn't one of Lil Kim's favorite pastimes. The legendary rapper was recently featured on Complex's Hiking with Rappers, and Kim joined King Keraun for a walk up the side of a mountain as they spoke about someone her most iconic moments. Lil Kim discussed her iconic red carpet looks that have set trends throughout her career, and she hilariously delivered commentary on why hiking isn't on her to-do list.
CELEBRITIES・2 DAYS AGO

Usher and his girlfriend Jennifer Goicoechea welcomed their second child together. On Tuesday, Usher broke the news with a pic of their newborn. He wrote on Instagram, “Hi my name is Sire Castrello Raymond … I am the newest addition to the Raymond crew. I was born Sept 29 2021 at 6:42pm weighting 7lbs 13oz. Hear me roar … A.K.A Ra Ra .👶🏽 ♎️Gang."
FAMILY RELATIONSHIPS・5 DAYS AGO
talentrecap.com

Beat Shazam host Jamie Foxx just announced his upcoming book tour. Nick Cannon will be joining him at the Apollo Theater on Oct. 16. The Masked Singer host will serve as the moderator of the panel. Foxx shared the news in a tweet where he also revealed that his relationship with Cannon goes way back.
BOOKS & LITERATURE・19 DAYS AGO
Essence

LIKE US ON FACEBOOK. FOLLOW US ON TWITTER AND INSTAGRAM. SUBSCRIBE ON YOUTUBE. Being a parent is hard, because there isn’t a book that can instruct parents on what to do with their kids and it’s even harder when you are co-parenting children with parents in separate households. One parent, the one that actually houses the children has their household rules. The other parent that is living somewhere else tends to the parent that’s looser then the housing parent because they want a spoil the children because they are not their, not to mention, they usually experience the children without all that extra that the housing parent gets to experience. Children also know that they can play parents off each other to get what they want.
RELATIONSHIPS・8 DAYS AGO

After his therapist told him to try practicing celibacy for a while, Nick Cannon confirms he's doing just that...at least for the next few months.
RELATIONSHIPS・13 DAYS AGO
Essence

Makeup artist and YouTube personality Mel Thompson has passed away at the age of 35. Her husband, Puffin Thompson, shared the news of the beauty influencer's death in an Instagram statement on her page. "Mel sadly passed away yesterday," Puffin wrote on Sept. 27. "It's really hard to just choose...
CELEBRITIES・19 DAYS AGO
hotnewhiphop.com

Actor, comedian, and Wild ‘N Out host Nick Cannon has been in the headlines more than a few times over the last year, and recently, he made a guest appearance on REVOLT TV’s Drink Champs podcast to touch on a few of those rumors and reports, among other things. On...
CELEBRITIES・12 DAYS AGO

Zonnique Pullins has a lot on her plate, but she's handling it with grace and a smile. The 25-year-old juggles her work on Fox Soul's The Mix, motherhood and a possible return to reality TV. Sitting down for a virtual chat with ET's Deidre Behar, the singer shares how drastically her life has changed since she welcomed her daughter, Hunter, in December and began co-parenting with her beau, rapper Bandhunta Izzy. The two are happily dating as they navigate this chapter of life together.
RELATIONSHIPS・1 DAY AGO
ETOnline.com

The rapper helps marry a same-sex couple in the latest episode of Cardi Tries, and Raven-Symoné is there to help. ET has an exclusive sneak peek at the special moment when the Raven's Home star surprises the brides during their ceremony. The clip begins with Cardi officiating the wedding and...
RELATIONSHIPS・9 DAYS AGO
New York Post

This social media star is about to find out if things really are cheaper by the dozen. Veronica Merritt — better known to her 95,000 TikTok followers as Thismadmama — is expecting her 12th child. The 36-year-old, who hails from upstate New York and also has 32,500 Instagram followers, announced...
NEW YORK CITY, NY・4 DAYS AGO
93.1 WZAK

Nick Cannon is sharing a memory on his upcoming daytime show, Nick Cannon, premiering on Oct. 11, about how he took parenting into his own hands with his ex-wife Mariah Carey. The former couple share twins, son Moroccan and daughter Monroe, and Nick reveals that for their 10th birthday, he bought them cell phones even though their mother was opposed to the idea.
CELEBRITIES・8 DAYS AGO
Bossip

'Queens' star Eve reveals she and her husband Maximillion Cooper are expecting their first baby together.
CELEBRITIES・1 DAY AGO
thesource.com

Kid ‘N Play arrived on Nick Cannon’s daytime talk show and the host saluted the legends for their impact on his life. Cannon revealed without the Hip-Hop duo “there would be no me” citing them as inspirations to his youth. “A kid growing up in the hood, in the project...
THEATER & DANCE・10 DAYS AGO
hotnewhiphop.com

If you’ve been keeping up with the Facebook Watch series, Cardi Tries __, you may already be aware that recently, Cardi B had the opportunity to officiate the marriage of a lesbian couple with the help of Disney Channel alum, Raven-Symoné. Yesterday, the “Bodak Yellow” rapper took to Twitter to...
RELATIONSHIPS・7 DAYS AGO