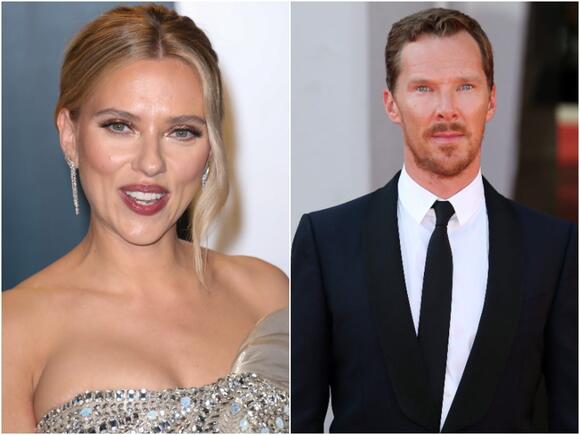 "It's sad what's going on between the lawyers," Cumberbatch said during a recent profile with The Hollywood Reporter . "Just the verbiage and the accusations of, 'Put it in a global pandemic context.' The whole thing's just a bit of a mess."

Cumberbatch, who starred alongside Johansson in multiple iterations of the "Avengers" series, continued: "We're trying to understand what the revenue streams should be for artists that contribute to the billion-dollar business that is Disney. And it has to be contractualized. How does an artist's normal compensation with box office bonuses, how does it work? It's a new paradigm, and it's a very complex one."

Johansson filed a lawsuit against Disney earlier this year claiming that the company violated her contract when it released the recent superhero blockbuster "Black Widow" simultaneously on the Disney+ streaming platform and in movie theaters. A copy of the lawsuit obtained by Insider claims that Johansson's "Black Widow" contract was for an exclusive movie theater release, with her salary largely based on the film's box office performance.

The suit also said that Johansson's representatives received assurances from Marvel in May 2019 that "Black Widow" would still have a traditional theatrical release when they contacted the company after Johansson grew concerned that Disney had plans to experiment with simultaneous streaming and theatrical releases. A source told The Wall Street Journal , who first reported the news of the suit, that the actor could have missed out on $50 million due to the release strategy change.

Speaking about the historic nature of the lawsuit, Cumberbatch continued: "No one saw this coming, and no one should use hindsight to say, 'Well, it should have been done.' That was the first of these films that was going to get a cinematic release during the pandemic and got stalled and stalled and stalled. It's very new territory."

Disney responded to Johansson's lawsuit with a statement in which they disclosed that the actress has earned $20 million to date for the movie.

"There is no merit whatsoever to this filing," a Disney spokesperson said. "The lawsuit is especially sad and distressing in its callous disregard for the horrific and prolonged global effects of the COVID-19 pandemic."

The company also claimed that the "Black Widow" release on Disney+ with paying Premier Access "significantly enhanced her ability to earn additional compensation."

Disney's statement was heavily criticized by multiple Hollywood women's advocacy groups who said the statement was a "gendered attack" on Johansson.

"While we take no position on the business issues in the litigation between Scarlett Johansson and The Walt Disney Company," a joining statement from Time's Up, Women In Film, and ReFrame read, "we stand firmly against Disney's recent statement which attempts to characterize Johansson as insensitive or selfish for defending her contractual business rights."

Sorry Disney. I don't have much sympathy when you blame the pandemic for your underhanded practices. If you're gonna base her salary off box office receipts, you should've waited until the initial release to put it on Disney +

a contract is a contract regardless of the pandemic. if the majority of her $ came from box office than they should be held liable.

The Marvel Cinematic Universe has become a well-oiled machine over the last decade of filmmaking, but there are still some major roadblocks every so often. The most recent was Scarlett Johansson’s legal battle with Disney over the release of Black Widow, which has since been resolved. And now Avengers: Endgame co-director Joe Russo has broken his silence on ScarJo’s lawsuit.
MOVIES・8 DAYS AGO
People

Benedict Cumberbatch and Sophie Hunter attend The Power of the Dog premiere at The Royal Festival Hall on Oct. 11 in London.
MOVIES・11 DAYS AGO
Deadline

Kirsten Dunst and Benedict Cumberbatch were so deep in character for Jane Campion’s upcoming Netflix thriller The Power Of The Dog that they didn’t speak to each other on set. Speaking at today’s Deadline Contenders London, Dunst described the on-set dynamics as “interesting”, with Cumberbatch relishing the role of Montana rancher Phil Burbank, who takes an immediate dislike to his brother’s (Jesse Plemons) new fiancée Rose (Dunst). “Benedict’s character is a looming figure who slowly infiltrates Rose’s brain and gaslights her,” said Dunst. “She starts strong but he does so much to intimidate her until eventually she becomes an alcoholic.” The film sees Dunst...
MOVIES・14 DAYS AGO
Collider

Amazon Studios has released a new poster for The Electrical Life of Louis Wain, its star-studded biopic starring Benedict Cumberbatch as the eccentric British artist Louis Wain. The new poster features Cumberbatch and Claire Foy (The Crown), who plays the artist’s wife, Emily Richardson. The Electrical Life of Louis Wain will premiere in theaters on October 22 before coming to Amazon Prime on November 5.
MOVIES・10 DAYS AGO

Scarlett Johansson and Disney announced this Thursday that they have reached an agreement to resolve the complaint that the actress interposed against the Mickey Mouse giant for the benefits of "Black Widow" (2021). Johansson said he was "happy" for having solved his "differences with Disney" and was willing to work...
CELEBRITIES・15 DAYS AGO
ComicBook

Stranger Things star Finn Wolfhard says that Stranger Things 4 is going to be "really messed up." The actor sat down with The Tonight Show with Jimmy Fallon to discuss Ghostbusters Afterlife and the beloved Netflix show. Season 3 of Stranger Things left things in a precarious position for both the Hawkins kids and the adults that have been helping them navigate the perilous supernatural events in and around the town. Fallon asked Wolfhard about the Dufner Brothers' directing the series. The star responded with a bunch of gratitude to the duo for remaining committed to the show. When you think about how many years Netflix has been airing this series, it would be easy to see some parties become disengage. (Fans have quickly pointed to that last season of Game of Thrones as the ultimate example.) The fire is still there and now Wolfhard has people suspecting the worse when things get going on the streaming giant.
TV & VIDEOS・11 DAYS AGO
justjaredjr.com

Scarlett Johansson is still going to be working with Disney on an upcoming project!. The actress was involved in a highly publicized lawsuit with the Mouse House over her last project Black Widow. After receiving a lot of support from other celebs and organizations, Scarlett‘s suit with Disney was settled...
MOVIES・10 DAYS AGO
seattlepi.com

“There’s a lot of tension, just like there is in a lot of industries, because there’s a lot of disruption,” he said. “People’s nerves are fraying, and it’s hard to predict what’s going to happen or where anything is going.”. More from Variety. North Korea Blasts 'Squid Game' as Evidence...
MOVIES・9 DAYS AGO

Kdrama & Kpop Editor Jastine has a degree in journalism and took classes in international law and business communication. There is no denying that Chris Evans is best known for his portrayal as Captain America in the Marvel Cinematic Universe (MCU) movie series. Interestingly, the 40-year-old American actor has also gained worldwide attention for playing Human Torch in the 2005 film Fantastic Four and its second installment titled Fantastic Four: Rise of the Silver, which was released in 2007.
CELEBRITIES・11 DAYS AGO
imdb.com

(Superhero Bits is a collection of stories, updates, and videos about anything and everything inspired by the comics of Marvel, DC, and more. For comic book movies, TV shows, merchandise, events, and whatever catches our eye, this is the place to find anything that falls through the cracks.) In this...
TV SHOWS・11 DAYS AGO
UPI News

Oct. 14 (UPI) -- Jeremy Renner views a stage play that features the Avengers in a new teaser trailer for upcoming Disney+ series, Hawkeye. The heroic archer takes his family to see a Broadway musical named after Captain America titled Rogers in the clip released on Thursday. Hawkeye has taken his family to New York City to enjoy the holidays.
TV & VIDEOS・9 DAYS AGO
IndieWire

Are Timothee Chalamet and Zendaya Movie Stars? ‘Dune’ Will Tell Us This and Much More

“Dune” day has arrived in North America. For many film enthusiasts, it is the most-awaited movie of 2021; for the industry, even in a year of unknowns, it is one of its most uncertain events. Denis Villeneuve’s take on Frank Herbert’s classic science-fiction novel vies with “No Time to Die” for most advance attention among October openings. A $50 million opening weekend would represent major success, but most estimates put it closer to $40 million or less. This month also saw “Venom: Let There Be Carnage” ($90 million), “No Time to Die” ($55 million), and “Halloween Kills” ($49 million) — three...
MOVIES・1 DAY AGO

Margot Robbie’s Barbie has seemingly found her Ken in Ryan Gosling. The two-time Oscar-nominee is in final negotiations to star in the upcoming Warner Bros. and Mattel film, directed by Greta Gerwig, who also co-wrote the script with Noah Baumbach. Robbie also does double duty on the project; in addition to starring as the iconic Mattel doll, she’s producing the movie under her LuckyChap Entertainment banner, which is coming off an Oscar-winning run for last year’s “Promising Young Woman.” Producers on “Barbie” also include LuckyChap’s Tom Ackerley and Josey McNamara; Mattel’s Robbie Brenner and Ynon Kreiz; and David Heyman. Plans to adapt Barbie’s...
MOVIES・21 HOURS AGO
imdb.com

(Superhero Bits is a collection of stories, updates, and videos about anything and everything inspired by the comics of Marvel, DC, and more. For comic book movies, TV shows, merchandise, events, and whatever catches our eye, this is the place to find anything that falls through the cracks.) In this...
TV SHOWS・8 DAYS AGO
Variety

In Denis Villeneuve’s “Dune,” Rebecca Ferguson plays Lady Jessica, lover of the world ruler portrayed by Oscar Isaac and matriarch to Timothée Chalamet’s messiah-in-waiting. She is a doting mother who is distracted by the pressures of a royal household, but more importantly, she is  brimming over with a supernatural power that could bring about revolution. That dynamic is not a bad allegory for Ferguson’s career. Having largely served as a second name on the call sheet behind male co-stars in the massive films that pepper her IMDb page, Ferguson has consistently dazzled critics and audiences — emerging as both an anchor...
MOVIES・2 DAYS AGO
Vulture

Zendaya Is in Dune for 7 Minutes. Here’s Everything She Says and Does

Zendaya opens and closes Dune. You hear her before you see anything onscreen. And at the movie’s end, it’s her character who tells Timothée Chalamet’s Paul Atreides, “This is only the beginning.” Her presence as Chani, the Fremen warrior whose fate is intertwined with Paul’s, doubles as promotion for both this film (in interview after interview, Zendaya and Chalamet talk about how they became “best friends” in the four days she was on set in Jordan) and its promised sequel. Her last line itself is marketing copy — stay tuned.
MOVIES・1 DAY AGO
dailytitan.com

In a blatant show of corporate greed, the Walt Disney Company is preparing for a legal battle, filing complaints in the federal courts of New York and California to retain copyrights of their Marvel characters instead of compensating the faces behind the Marvel Universe. Comic artists’ ingenuity deserves more than...
BUSINESS・9 DAYS AGO