Portland Trail Blazers’ Damian Lillard will not request trade, ‘back for more’ 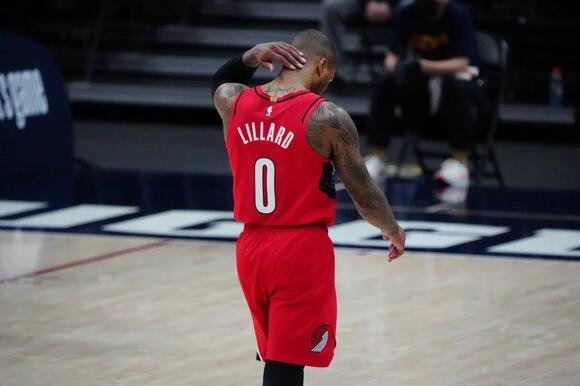 Damian Lillard removed any lingering doubt about his immediate future, saying on social media Wednesday that he will be back with the Portland Trail Blazers to open the 2021-22 season.

There was speculation this offseason that the six-time All-Star could be on the move, especially after Portland was eliminated from the NBA playoffs in the opening round for the second time in two seasons.

The photo connected to the post is of Lillard weaving his way through a sea of cameras and Trail Blazers fans on the way to the back of the arena.

Early speculation that the 31-year-old could be on the way out centered on a report that he was disappointed in the hiring of Chauncey Billups as head coach . 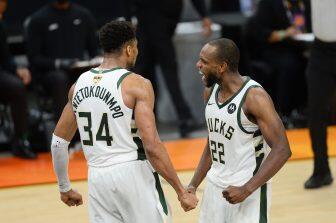 In 2019, Lillard agreed to a four-year super-max contract extension that will begin with the upcoming season. He is set to be paid $39.3 million by the Trail Blazers this season and $48.8 million in the final year of the deal in 2024-25, per Spotrac.

Future for Damian Lillard with the Portland Trail Blazers

Despite Damian Lillard making it clear he isn’t requesting a trade, there’s still a question about his long-term future in Portland. The future Hall of Famer indicated earlier in the offseason that the status quo was not working in the Pacific Northwest. It led to speculation that fellow backcourt star C.J. McCollum might be moved . With the season slated to get going next month, that has not yet come to fruition.

There’s no telling whether an offseason that included the acquisitions of Ben McLemore, Tony Snell, Larry Nance Jr. and Cody Zeller is going to be enough for Damian Lillard to pitch his tent in Portland over the long haul.

What we to know is that these Blazers can’t be seen as top-end title contenders in the Western Conference. Any objective observer would include that they are a tier behind the likes of the Los Angeles Lakers, Phoenix Suns, Los Angeles Clippers, Denver Nuggets, Utah Jazz and Golden State Warriors.

The NBA is known for having blockbuster trades, with big-name stars switching teams relatively regularly. Players definitely have more freedom of movement in today's basketball era, and it's rare to see a player spend their entire career with one team. There has also been an increase in the number of multi-team trades in recent memory, with teams often getting other franchises involved so that everyone can get what they want. Due to these factors, we often see fans and analysts create crazy trade proposals that they believe would help each team involved.
NBA・13 DAYS AGO
Larry Brown Sports

The Portland Trail Blazers will sink or swim according to what Damian Lillard does, but their new head coach will not bend over backwards to accommodate him. Appearing this week on SiriusXM NBA Radio, Blazers coach Chauncey Billups made some interesting comments about Lillard, saying that he would not push the All-NBA guard to stay in Portland.
NBA・13 DAYS AGO
basketball-addict.com

Damian Lillard and C.J. McCollum are the Portland Trail Blazers. No star tandem in basketball is more synonymous with their incumbent team than Portland’s, a reality owed both to Lillard and McCollum’s longevity in Rip City as well just how much of the Blazers’ sustained success has been driven by them. Portland owns the league’s […] The post Chauncey Billups sheds light on Blazers’ approach without Damian Lillard, C.J. McCollum appeared first on ClutchPoints.
NBA・11 DAYS AGO
CBS Sports

In a strange way, the Portland Trail Blazers became the picture of NBA stability over the past half decade or so. For six seasons in a row, they had the same coach, general manager and two leading scorers. No other team in basketball could say the same, but you could argue that no other team would want to. After all, Portland's continuity has grown stale in recent years. The Blazers have made it out of the first round only once in the past five seasons.
NBA・8 DAYS AGO

The Portland Trail Blazers have one more opportunity to secure a victory this preseason before things get real Wednesday against Sacramento at the Moda Center. • You can watch this Blazers vs. Warriors game live for FREE with fuboTV (free trial) The Blazers (0-3 preseason) play Friday night at Golden...
NBA・7 DAYS AGO
The Spun

Following an off-season full of trade rumors, NBA superstar Damian Lillard has made an official decision on his basketball future. Lillard, 31, reaffirmed his commitment to the Portland Trail Blazers on Tuesday afternoon. Even if the going gets rough this upcoming season, Lillard isn’t going anywhere. The NBA superstar is...
NBA・2 DAYS AGO
Lake Oswego Review

When you're the Sacramento Kings, you don't go nitpicking wins. They don't come around often enough. But I have to say, for all the good feels of beating the Blazers on the road in their season-opener on Wednesday, the fact that Luke Walton allowed Damian Lillard to get up a potential game-tying 3-pointer, rather that instructing his players to foul, as the final seconds ticked off was inexcusable.
NBA・1 DAY AGO

PORTLAND, Ore. (AP) — For all the handwringing this summer over Damian Lillard’s happiness in Portland, the Trail Blazers guard is staying put, hopeful the team’s moves will pay off. The biggest, of course, was parting ways with coach Terry Stotts after nine seasons. Portland hired Chauncey Billups, who has...
NBA・9 DAYS AGO
Yardbarker

Damian Lillard made it no secret that he wasn't happy with how the Portland Trail Blazers have handled themselves this offseason. Between his disappointment with how the organization went about hiring a new coach and ensuing call-out of the front office’s "failed" free-agency recruitment, he has been honest with his annoyance.
NBA・13 DAYS AGO
The Oregonian

The Portland Trail Blazers have turned down a trade proposal that would have sent CJ McCollum and multiple draft picks and pick swaps to Philadelphia for disgruntled All-Star forward Ben Simmons, according to a report from Shams Charania of The Athletic. According to Charania, the 76ers offered up Simmons for...
NBA・13 DAYS AGO
sportsgamblingpodcast.com

It was another disappointing year for the Portland Trail Blazers in 2020. Despite finishing with a 42-30 record and making the playoffs, the Blazers had yet another first-round exit at the hands of the reigning MVP, Nikola Jokic, and the Denver Nuggets. Even with the Blazers acquiring Norman Powell last season in a trade with the Toronto Raptors, it was not quite enough. This Portland Trail Blazers preview is going to have some interesting personnel changes and player movement.
NBA・11 DAYS AGO

The Portland Trail Blazers sat eight players for various reasons during Monday night’s preseason game against Sacramento, so there shouldn’t have been any surprise with the result. No Damian Lillard (rest) and no CJ McCollum (ankle sprain) is usually going to result in no victory for Portland, which lost 107-93.
NBA・10 DAYS AGO
The Oregonian

Root Sports now live on fuboTV: How to watch Portland Trail Blazers games on TV, without cable in 2021

Root Sports Northwest, the channel that will carry the majority of Portland Trail Blazers games broadcast in the Pacific Northwest this season and beyond, has now officially been added to fuboTV’s lineup of channels. The arrival of Root Sports on the streaming platform comes just days before the Blazers tip off in their NBA regular season opener on October 20 against the Sacramento Kings.
NBA・7 DAYS AGO
The Oregonian

The Portland Trail Blazers somewhat failed their first preseason test last week losing 121-107 to Golden State. Monday night, the Blazers will reveal if an additional week to review and study in preparation for their second test will produce better results. “We’ve spent a lot of time on the little...
NBA・11 DAYS AGO
Blazer's Edge

With the start of the 2021-22 NBA Season less than two weeks away, predictions on the fate of the 30 NBA franchises are coming on strong. Today David Thorpe of TrueHoop weighed in on the chances of each team, including the Portland Trail Blazers. The coach/pundit/writer seemed to want to...
NBA・13 DAYS AGO

It turns out the Philadelphia 76ers are interested in trading Ben Simmons for the Portland Trail Blazers “other” star guard after all. Well, at least for a price that Daryl Morey must have known Neil Olshey would refuse to pay. Shams Charania of The Athletic and STADIUM reported on Friday...
NBA・13 DAYS AGO
NBA

PHOENIX -- The Portland Trail Blazers moved to 0-3 in preseason play with a 119-74 loss to the Phoenix Suns Wednesday afternoon in front of a crowd of 9,772 at Footprint Center. “It was a horrible effort, I thought, by us,” said Trail Blazers head coach Chauncey Billups. “You know...
NBA・8 DAYS AGO
RealGM

76ers Are Waiting On A "Prayer" For Damian Lillard Trade

It's no secret the Philadelphia 76ers would love to add Damian Lillard in a swap that includes Ben Simmons. A league source says that isn't realistic right now. That source added that the Sixers are "waiting on a prayer" in hopes of dealing for the Portland Trail Blazers star. When...
NBA・11 DAYS AGO