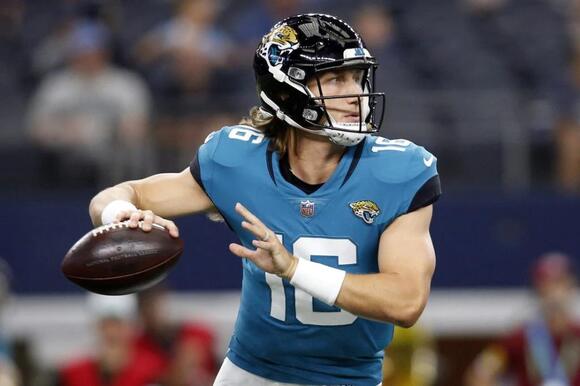 The Jacksonville Jaguars showed their faith in Trevor Lawrence back in April by selecting the quarterback with the top overall pick of the 2021 NFL Draft.

On Wednesday, the Jaguars doubled down by naming the rookie one of seven team captains for the upcoming season. The captains were decided by a player vote.

The Jaguars open their season at the Houston Texans on Sunday. 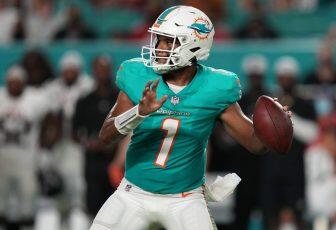 3 quarterbacks who should be benched after Week 2

While injuries plagued a few starting quarterbacks around the league on Sunday, there were three starters in particular that performed less than average. After the first slate of games drew to a close on Sunday afternoon, there were a number of starting quarterbacks that suffered injuries. Tua Tagovailoa, Andy Dalton, Tyrod Taylor and Carson Wentz were all hit by injuries that caused them to be out of the game.
NFL・29 DAYS AGO
thecomeback.com

Urban Meyer has had quite a week already. The embattled Jacksonville Jaguars coach had to apologize after viral videos showed him at a bar mingling with a young woman following the team’s fourth-straight loss to open the 2021 season. The team owner released a statement calling his actions “inexcusable” and there were reports of players losing faith in him.
NFL・11 DAYS AGO
ClutchPoints

Jacksonville Jaguars head coach Urban Meyer might be in hot water right now, but his quarterback Trevor Lawrence is fully behind him. Lawrence was asked about the entire situation and made it very clear that it changes nothing between him and Meyer. Via NFL.com:. “He’s still my head coach. I...
NFL・12 DAYS AGO
AllClemson

Trevor Lawrence to Reunite with 'Annoying' Christian Wilkins in London

The Jacksonville Jaguars have had a lot going on since Thursday’s loss to the Cincinnati Bengals and a lot of it hasn’t been football related. However, when it comes to Trevor Lawrence, there is a lot for the rookie quarterback to smile about as he is not only coming off his best game, but is celebrating a birthday today.
NFL・12 DAYS AGO
Larry Brown Sports

Watch: Trevor Lawrence made bold claim about Dolphins on sideline

The Jacksonville Jaguars entered Sunday’s game against the Miami Dolphins with zero wins in five games, but it would appear that Trevor Lawrence’s confidence remains intact. The Jaguars moved the ball with relative ease on their first offensive drive in London. They probably would have scored a touchdown had it...
NFL・1 DAY AGO
The Spun

Trevor Lawrence Appears To Disagree With Urban Meyer After Game

Urban Meyer and Trevor Lawrence didn’t appear to be on the same page following Sunday afternoon’s loss to the Tennessee Titans. The Jaguars lost to the Titans, 37-19, on Sunday afternoon. Jacksonville is now 0-5 on the season. The franchise has lost 20 straight games. Jacksonville had a chance to...
NFL・8 DAYS AGO
New York Post

Trevor Lawrence has no idea what Urban Meyer is talking about

Jaguars coach Urban Meyer and quarterback Trevor Lawrence don’t seem to be on the same page. After falling to 0-5 for the season in 37-19 loss to the Titans, the pair had differing answers about Meyer’s goal-line play call in the fourth quarter — when they ran a handoff to running back Carlos Hyde instead of a quarterback sneak while down by 12.
NFL・7 DAYS AGO

Lawrence: ‘I’ll always remember this one’

The Jacksonville Jaguars lost again on Sunday, falling 37-19 to the Tennessee Titans and Urban Meyer was again making questionable decisions in the defeat. Things continue to be rough for Meyer in the NFL, as today he was blaming his rookie quarterback Trevor Lawrence, for his inept play calls around the goal line.
NFL・8 DAYS AGO
The Spun

Trevor Lawrence is getting his first taste of the international NFL experience this weekend. He should get used to it, as the Jacksonville Jaguars make annual trips across the pond to play in London. During his press conference this week, Lawrence said he was very excited for the experience. “I...
NFL・4 DAYS AGO
Sportsnaut

The Jacksonville Jaguars' 2021 schedule is rather easy in the early going. Can they generate momentum and make a run for the AFC South title? Find out here.
NFL・1 DAY AGO

Jacksonville Jaguars great Maurice Jones-Drew is excited for Sunday’s all-Florida clash in the capital as his former side and the Miami Dolphins look to kickstart their seasons.A week after the Atlanta Falcons held off a late New York Jets comeback, fans will again pack into the Tottenham Hotspur Stadium as the NFL London Games doubleheader comes to a conclusion.Both teams will be hoping that swapping the Florida sunshine for an autumnal afternoon on the Tottenham High Road brings about an uptick in fortunes after challenging starts to the campaign.Quarterback Tua Tagovailoa is set to return from injury as the Dolphins...
NFL・2 DAYS AGO
CBS Sports

The NFL wraps up its international series for 2021 with a familiar franchise making their London trip. The Jacksonville Jaguars head to London for the seventh time since the start of the 2013 season, but for the first time in three years (NFL didn't have any international games in 2020 due to the COVID-19 pandemic).
NFL・4 DAYS AGO
The Clemson Insider

What They Are Saying: Lawrence gets first NFL win

Trevor Lawrence earned his first NFL win Sunday as Jacksonville beat Miami on a last second field goal in London.  Twitter was buzzing about Lawrence's play and the win. In this edition of What They Are (...)
NFL・1 DAY AGO
Action News Jax

Jacksonville, Fl — Jaguars quarterback Trevor Lawrence is celebrating his first birthday in Jacksonville and looking ahead to Sunday’s matchup with AFC South rival Tennessee. The 22-year-old is seeking his first win in the NFL amid a week of controversy surrounding head coach Urban Meyer. Lawrence, the first overall pick...
NFL・13 DAYS AGO
The Spun

It’s been a tumultuous week for the Jacksonville Jaguars and head coach Urban Meyer. But while Meyer’s future with the team is now a lot more questionable than it was a week ago, quarterback Trevor Lawrence isn’t going anywhere. On Wednesday, Lawrence addressed the recent controversy with Meyer and whether...
NFL・11 DAYS AGO
Audacy

Jaguars rookie quarterback Trevor Lawrence was asked about the drama surrounding his head coach on Wednesday. Speaking with reporters from Jaguars practice, Lawrence took the high road when he was asked about Meyer, who apologized this week after he was caught on video dancing with a young woman at an Ohio bar -- after he'd declined to travel back home with his team following a loss to the Bengals on Thursday Night football.
NFL・12 DAYS AGO
AllClemson

Jacksonville Jaguars quarterback Trevor Lawrence is getting more comfortable in the NFL. Last week's close 24-21 loss to the Cincinnati Bengals is a tangible example. While the former Clemson star quarterback and first overall NFL draft pick had just 204 yards passing, he completed a career-high 70 percent of his throws.
NFL・8 DAYS AGO
Detroit Sports Nation

On Sunday afternoon, the Jacksonville Jaguars lost their 20th consecutive game as they fell to the Pittsburgh Steelers by a score of 37-19. Following the game, Jaguars head coach (for now) Urban Meyer spoke to reporters and he said the team is “pretty Desperate…Desperate for a win.”. But rookie QB...
NFL・7 DAYS AGO