How Joey Gallo Is Dealing With Rough Start, Boos Since Joining Yankees 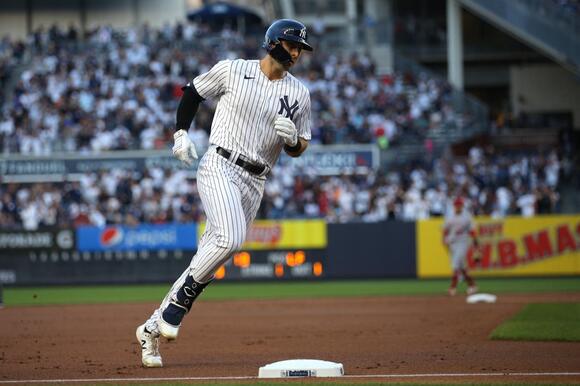 NEW YORK — When Joey Gallo was traded to the Yankees prior to the trade deadline, the outfielder could barely contain his excitement, starting off what he called a "surreal" opportunity.

As much as Gallo has slugged his way to some memorable moments over his first month and change in pinstripes, his first impression with a new fan base—one he grew up a part of—hasn't gone according to plan.

After going 0-for-4 with four strikeouts on Monday night, Gallo's batting average with the Yankees plummeted to .130. Over his first 35 games since the trade, Gallo has just 16 hits in 123 at-bats. Out of his 151 plate appearances in that span, the outfielder has struck out 61 times.

Given the night off on Tuesday, Gallo took a few minutes to speak with reporters during pregame warmups, addressing his struggles head on.

"Obviously you want to play well, especially if you're on a new team," Gallo explained. "But at the same time, it's not the first time. It's baseball. You're gonna struggle sometimes."

Gallo can crush prodigious home runs and whack baseballs with the same elite exit velocities as his new teammates Aaron Judge and Giancarlo Stanton. He's also a player with a propensity to strikeout quite a bit, though. Even he'll admit that it's a huge part of his game, something that's not necessarily going to go away.

"It's not a surprise, I'm a high strikeout guy," he said. "It's not like I hit .300. I'm a walk guy and hit home runs. I want to be better, but that's kind of just the player I am. So, I've gone through streaks before. It's just about showing up every day, keep working and swing at strikes and eventually like that will click."

With the numbers he's been producing since he was acquired, Gallo is getting more and more familiar with the boo birds in the Bronx. He heard quite a few boos en route to Monday's golden sombrero.

While the outfielder joked that he thought fans were saying Luke—as he'll sometimes hit before first baseman Luke Voit in the lineup—he understood a critical fan base is part of playing at Yankee Stadium.

"It is what it is," Gallo said. "Playing in New York, you understand that's gonna be part of it and they want a winning product so it's just part of the business. We're professional baseball players, so you got to go out there and do your job and do it to the best."

So, how does he start to turn things around? Gallo spent Tuesday afternoon taking some swings off the high-velocity machine with his teammates. The 27-year-old added that he and the team's hitting coaches (Marcus Thames and P.J. Pilittere) watched film from Gallo's career in Texas as well, trying to pinpoint parts of his approach and rhythm that led to success in a Rangers uniform.

Other than that, it's staying locked in and keeping the right mindset. After all, the Yankees are in the midst of a brutal part of their schedule, battling through the final month of the year to secure a postseason spot.

"I think a day off is good every once in a while, especially the stretch that we've had," Gallo said. "I've worked hard to get back to where I know I can be and help the team win, so it's frustrating not winning games, but that's part of baseball. I just gotta keep working through it, show up every day and figure it out."

Joey Gallo’s girlfriend is happy to have his undivided attention after his season ended on Tuesday night. Following the wild-card game — which ended in a 6-2 Yankees loss to the Red Sox — Claire Danko shared a PDA snap from the past of her with the Yankees outfielder. “I...
MLB・10 DAYS AGO
FanSided

Why do the New York Yankees make blockbuster acquisitions that. have to be discussed as potential reversals two months into a one-and-a-half-year commitment?. Why does the New York media get the chance to write about Joey Gallo in the same tone of voice as Sonny freaking Gray after two months of data? Why does acquiring Kiké Hernández and Hunter Renfroe work out in Boston, but adding a 40-homer, Gold Glove All-Star lefty to the Yankees’ lineup result in two months of a feckless .160 average?
MLB・9 DAYS AGO
NJ.com

Carlos Correa is going to get paid. It’s just a matter of how much the two-time All-Star will be offered. Correa headlines a bumper crop of free-agent shortstops, which also includes the Los Angeles Dodgers’ Corey Seager, Colorado Rockies’ Trevor Story and New York Mets’ Javier Baez. So what will...
MLB・3 DAYS AGO
NJ.com

Winter is coming. So are changes for the New York Yankees. That much is clear, after Tuesday’s 6-2 loss to the Boston Red Sox in the American League Wild Card Game. But just how much change the team will make remains uncertain. Want more Yankees coverage? Get exclusive news, behind-the-scenes...
MLB・9 DAYS AGO

Pete Rose is not a fan of what the New York Yankees are doing right now. Specifically, what they are getting out of Joey Gallo. The Yankees were bounced by the Boston Red Sox last week in the American League Wild Card Game, and Boston has since beaten the Tampa Bay Rays and advanced to the AL Championship Series.
MLB・4 DAYS AGO
NJ.com

The internet never forgets. Former New York Yankees slugger Alex Rodriguez has been covering the 2021 MLB playoffs by resuming his role as a studio analyst for FOX Sports. Last week, Rodriguez was analyzing the American League Division Series between the Boston Red Sox and Tampa Bay Rays with David Ortiz, Frank Thomas and Kevin Burkhardt. The gang was discussing a video clip from Game 1, when the Rays were seen eating popcorn in the dugout during the seventh inning of their 5-0 win.
MLB・4 DAYS AGO
NJ.com

To err is human. And no doubt Joe West has made his fair share of mistakes during his four decades a big-league umpire. During Sunday’s game between the New York Yankees and Boston Red Sox, the Boston Globe’s Pete Abraham tweeted the following:. Joe West on the plate tonight. He...
MLB・20 DAYS AGO
NJ.com

That includes banned MLB legend Pete Rose, who talked to USA Today’s Bob Nightengale about a variety of subjects. One of them was the New York Yankees, and their 6-2 loss to the Boston Red Sox in the American League Wild Card Game. “That was the worst (bleeping) lineup they...
MLB・6 DAYS AGO

Gio Urshela is starting to heat up for the Yankees

After posting consecutive seasons with a 132 and a 133 wRC+ in 2019 and 2020, it’s not hard to be disappointed at Gio Urshela’s overall offensive performance in 2021. Fans will point to the fact that he has been far from the disciplined, sneaky dangerous hitter that he was in those two campaigns, and they would be correct to do so.
MLB・14 DAYS AGO
NJ.com

How to fix the Yankees, via Red Sox legend

Red Sox legend David Ortiz had an interesting take on how to fix the Yankees. Fire the hitting coaches? Nope. Can the third base coach? Nope. Drop manager Aaron Boone? Nah. Overall the roster? Not quite. “The Yankees have great talent,” Ortiz told TMZ in Beverley Hills on Friday. “I...
MLB・1 DAY AGO
chatsports.com

Yankees History: How the 1951 pennant was won

For the first time in a couple years, the Yankees are playing in an ultra-important series to end the regular season. The last time that they had genuinely major stakes this late was probably 2012, when they went into the final three games tied with the Orioles atop the AL East. The Yankees swept their final series while Baltimore dropped two of three, giving the Yankees a final two-game cushion.
MLB・14 DAYS AGO
numberfire.com

New York Yankees catcher Gary Sanchez is in the lineup Saturday in the team's game against the Tampa Bay Rays. Sanchez is getting the nod behind the plate while batting eighth in the order against Rays starter Shane Baz. Our models project Sanchez for 0.7 hits, 0.5 runs, 0.2 home...
MLB・15 DAYS AGO

Pete Rose Is Wrong, It Is Actually Very Easy to Imagine Ray Charles Striking Out As Frequently As Joey Gallo

USA Today's Bob Nightengale got Pete Rose on the line to complain about the state of the modern game and the Hit King provided some colorful critiques. Rose, still banned from baseball, focused his most strident fist shaking on two clouds: the New York Yankees and Joey Gallo. “That was...
MLB・3 DAYS AGO
New York Post

How the Yankees and Mets proved me wrong — again

On May 23, the Yankees defeated the White Sox, 5-4, to complete a three-game sweep of the American League Central leaders and win their sixth straight game overall. At 28-19, playing at a .596 clip, they put themselves on target to finish 97-65. They would not match or exceed that...
MLB・14 DAYS AGO
New York Post

Luke Voit’s season is officially over. The first baseman was transferred to the 60-day IL with left knee inflammation before Sunday’s regular-season finale against the Rays. Voit had been placed on the 10-day IL on Thursday, and Aaron Boone vaguely mentioned the possibility of Voit coming back and playing a...
MLB・13 DAYS AGO
MLive

Since 2012, one game has been played by two teams to determine who takes the Wild Card spot into the playoffs. On Tuesday, two teams who have a long and storied history against one another to see who makes their way into the American League Playoffs, as the New York Yankees and Boston Red Sox faceoff in the AL Wild Card Game.
MLB・12 DAYS AGO

Yankees vs. Red Sox Is the Perfect Start to the Playoffs

Welcome to the first edition of the Five-Tool Newsletter! We’re launching this just in time for the 2021 MLB postseason, so among other things, this issue will focus on tonight’s epic AL wild-card game between the Yankees and Red Sox at Fenway Park. For those of you who don’t know...
MLB・11 DAYS AGO
Audacy

The Yankees need more from Joey Gallo … like a lot more

The Yankees knew what they were getting when they acquired Joey Gallo at the trade deadline—a powerfully-built slugger with herculean strength, but certainly of the feast or famine variety with a maddening propensity for stranding runners. Gallo was seen as a worthy gamble, providing left-handed power for a team in desperate need of a spark. A surprisingly capable fielder for his size (6’5”/235), Gallo also represented a defensive upgrade for the Yankees, who, at the time, had been slumming it with liabilities Miguel Andujar and Clint Frazier in left field.
MLB・10 DAYS AGO
IBTimes

Major League Baseball’s biggest rivalry takes center stage Tuesday night in the 2021 American League Wild-Card Game. The Boston Red Sox host the New York Yankees in an elimination game with a trip to the ALDS on the line. The AL Wild-Card Game starts at 8 p.m. ET from Fenway...
MLB・11 DAYS AGO
NJ.com

Don’t let the door hit you on the way out. That’s how many New York Yankees fans feel about outfielder Joey Gallo. When general manager Brian Cashman acquired Gallo from the Texas Rangers before the July 30 trade deadline, the 27-year-old was hailed as a savior, a left-handed power bat who could bring balance to the lineup while providing Gold Glove-caliber defense in the outfield.
MLB・2 DAYS AGO