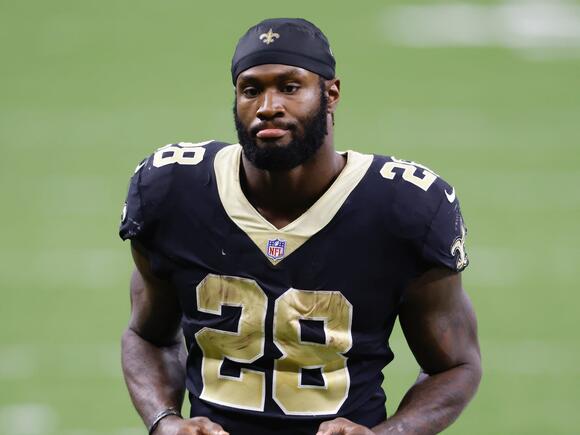 Veteran running back Latavius Murray is searching for a new team days before the NFL season begins.

According to ESPN's Adam Schefter , the New Orleans Saints cut the 31-year-old Murray, their backup running back, on Tuesday.

Schefter reported that the Saints asked Murray for a pay cut. Murray refused and was then cut from the team.

Former NFL player and current Fox Sports analyst Emmanuel Acho noted that the timing was even harsher. According to Acho, Murray is a vested veteran - a player with four years of experience. If Murray had been on the roster past 3 p.m. on Tuesday, his salary for 2021 would have become guaranteed.

According to ESPN's Mike Triplett , Murray had $3.15 million in salary and bonuses for this season.

As Acho and Schefter also pointed out, Murray is coming off the most efficient season of his career, averaging 4.5 yards per carry for 656 rushing yards. In 2019, Murray filled in for the injured Alvin Kamara and produced 307 total yards from scrimmage and 4 touchdowns.

In other words, Murray likely was not interested in taking a pay cut, given how he had produced when his number was called.

Several members of the sports world noted that it's the latest example of why athletes must sometimes take care of themselves before the team.

Former NFL defensive tackle and ESPN analyst Mike Golic once described a similar scenario during his playing career. Heading into his ninth season in the NFL, Golic was recovering from knee surgery while on the Miami Dolphins, who had just drafted two defensive tackles.

Golic wanted to test his knee during minicamp to see how he was progressing from surgery. The Dolphins made him sign a waiver that stated his knee was healthy enough to play. Golic signed it, which gave the Dolphins the permission they needed to cut Golic since NFL teams can't cut injured players. Golic never played again in the NFL.

While Murray seems likely to find a backup role on another team at least, it is a reminder that roster spots are tenuous for even productive players.

All this does is put alot of pressure on Kamara to not get injured. Because say what u may about Murray, he is a quality back up running back.... it could come back to bite them if Kamara misses significant time (God forbid).

He'll get picked up quickly. Pay cut could have been an advantage if done right. If he ended up in a lower tax bracket he could have ended up making near the same amount as he does at $3 million and paying taxes on that.

This is why there is NO loyalty towards a job..they will cut you like there is no tomorrow when it comes to their bottom line...this is why I can’t be mad when a Player wants to take his destiny into his own hands...it goes both ways...remember at the end of the day...It’s Strictly Business....!!!!!

Legendary Miami Dolphins quarterback Dan Marino appeared to have a special message for Tua Tagovailoa on Sunday afternoon. Tagovailoa, a first-round NFL Draft pick out of Alabama in 2020, has struggled mightily as the Dolphins starting quarterback this season. He’s dealt with injuries and played inconsistently behind center for the South Florida franchise.
NFL・1 DAY AGO
The Spun

Deshaun Watson has been mentioned in countless trade rumors over the past few months. With the Nov. 2 trade deadline approaching very soon, there’s a chance the Houston Texans will finally part ways with the Pro Bowl quarterback. According to John McClain of the Houston Chronicle, the Texans could have...
NFL・5 DAYS AGO
ClutchPoints

The rumor whispers really started to heat up on Wednesday when multiple reports indicated that the Miami Dolphins were nearing a deal to acquire Houston Texans quarterback Deshaun Watson. These rumors have been super popular dating back to the summer and yet again, nothing has been put in ink. Dolphins...
NFL・4 DAYS AGO
FanSided

3 NFL quarterbacks who need to be benched after Week 6

Every Sunday, many NFL starting quarterbacks played badly enough to deserve being benched. Another week of NFL action, another trio of starting quarterbacks who deserved to be benched. There is a reason the league puts so many games on during the early-afternoon window. The NFL does not want to showcase...
NFL・8 DAYS AGO

The New Orleans Saints have been noticeably lacking depth at wide receiver through the first couple weeks of the 2021 regular season. Much of that is due to the absence of former All-Pro pass-catcher Michael Thomas. Thomas has been sidelined on the physically unable to perform (PUP) list since the...
NFL・7 DAYS AGO
FOX Sports Radio

Things started off differently James Winston and the New Orleans Saints In the Week 5 game with the Washington Football team on Sunday. Winston threw an interception to start the game, then an impressive 72-yard touchdown, then a confused cough, and you just had to know that head coach Sean Payton would probably start working on the quarterback and assistant quarterback. Tsum Hill Just a little more. Unfortunately, Hill was the victim of an illegal helmet-to-helmet kick from the back corner William Jackson The third that led to Hill being moved to the locker room.
NFL・15 DAYS AGO
The Spun

The Saints Have Signed A New Running Back

The New Orleans Saints lost back-up running back Tony Jones Jr. to an ankle injury during Sunday’s loss to the New York Giants and have already made a move to add depth at the position. According to ESPN’s Field Yates, the Saints signed 24-year-old Ryquell Armstead to their practice squad...
NFL・19 DAYS AGO

The Chicago Bears have traded for speedy receiver Jakeem Grant from the Miami Dolphins for a 2023 sixth-round draft pick, according to multiple reports on Tuesday. Grant is an elite return man (2nd team All-Pro last season) and will also bring value to the receiver position. For the season, he...
NFL・21 DAYS AGO
Larry Brown Sports

Jameis Winston was heated with teammate Tre’Quan Smith after a failed third-down play in the fourth quarter on Monday night. Winston’s New Orleans Saints were tied with the Seattle Seahawks at 10 early in the fourth quarter. The Saints had a 3rd-and-12 situation and sent four receivers out on a pass play. Winston’s pass was batted down, and the Saints ended up punting.
NFL・12 HOURS AGO
FanSided

3 trades Saints must make before the deadline

The New Orleans Saints are over .500 and while the NFC South title might be difficult with how dominant the Buccaneers have looked, this team could still make the playoffs and possibly go on a run once they get there. In order to make their playoff dreams come true, the...
NFL・3 DAYS AGO
ClutchPoints

Houston Texans quarterback Deshaun Watson remains with the AFC South organization as it stands today, but the troubled signal-caller could soon be on the move. With the Miami Dolphins long being linked to Watson, who is still facing some very serious sexual assault allegations and presumably more than a few legal battles ahead, the Texans have continually tried to distance themselves from the former first round NFL Draft pick. In addition to the Dolphins, there is apparently at least one other team that has at least checked in on Watson and his availability via trade.
NFL・20 DAYS AGO

Is rookie QB Justin Fields progressing? Are any changes coming? Brad Biggs’ 10 thoughts on the 38-3 beating Tom Brady and the Tampa Bay Buccaneers put on the Chicago Bears.

10 thoughts after the Chicago Bears were trounced by the Tampa Bay Buccaneers 38-3 on Sunday at Raymond James Stadium, the team’s worst loss since the 2014 season. 1. This is what happens when a team that on its best day is a one-dimensional club with a struggling offense runs into a powerhouse coming off a Super Bowl championship with a real chance to compete for another one. It probably ...
NFL・1 DAY AGO
The Spun

Longtime NFL agent Drew Rosenhaus has been banging the drum for the Miami Dolphins to trade for Deshaun Watson since the summer. He pounded it a little harder today, after Miami dropped a sixth-straight game. The Dolphins battled back to take a late 28-27 lead before a Younghoe Koo field goal on the final play lifted the Atlanta Falcons to a 30-28 win.
NFL・1 DAY AGO
Insider

The Arizona Cardinals are the last undefeated team in the NFL, and have finally reached the top of our Power Ranking.
NFL・4 DAYS AGO
The Spun

Earlier this week, the Philadelphia Eagles made a surprising decision regarding one of the team’s wide receivers. Following the team’s win over the Carolina Panthers this weekend, the Eagles released wide receiver Travis Fulgham. The move comes a year to the day after Fulgham had a breakout game against the Pittsburgh Steelers.
NFL・13 DAYS AGO
Sportsnaut

Losers of six consecutive games, there’s a darn good chance that the Miami Dolphins are going to go into full-scale
NFL・1 DAY AGO
Yardbarker

The 31-year old Trufant spent his first seven NFL seasons with the Falcons. He was a first-round draft pick by Atlanta in 2013 when the Falcons took him 22nd overall out of Washington. Trufant made his only Pro Bowl in 2015 after he had an interception and 11 passes defended.
NFL・13 DAYS AGO
SaintsNewsNetwork

What the Saints Said After Monday's Win

Here's a look at what some of the Saints players and Sean Payton said following Week 7's primetime win over the Seahawks.
NFL・10 HOURS AGO
USA TODAY Sports Media Group

The New Orleans Saints filed a series of roster moves on Tuesday’s update to the daily NFL transactions wire, which carry interesting implications for the days and weeks ahead. One of them is the addition of a new kicker in Brian Johnson from the Chicago Bears practice squad (more on him in a bit), whose arrival suggests a longer recovery than anticipated for Wil Lutz.
NFL・13 DAYS AGO