‘Big Brother 23’ spoilers: A futile campaign begins as everyone realizes it’s a double eviction this week 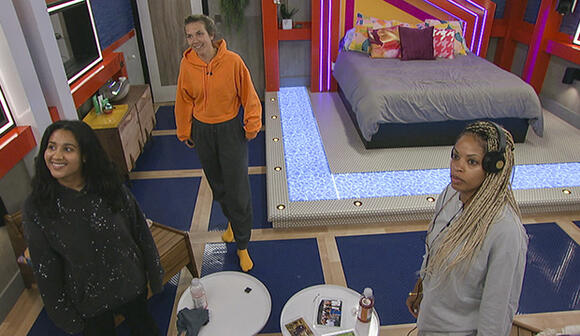 After the chaos of Alyssa winning the Veto on “ Big Brother 23” to foil Tiffany ‘s plan, things have settled into the typical groove of waiting around as we count down to Thursday. Claire isn’t going down without a fight, but we all know this is a lost cause.

Claire knows she’s likely leaving, but she spent part of Tuesday campaigning to some people, including Azah and Kyland , and made some compelling pitches, mostly centered on how Xavier is tough to beat in a final two. Her go-to line for both of them was “X doesn’t need you.” “ What I learned this week is that Tiff will always take you,” Claire told Kyland. “I don’t think Tiff takes me based off of her actions this week. I know I don’t beat Tiff. I didn’t come and play this game to lose. I take you and I do think this is close.” She also told him that if she leaves this week, then X must be playing a helluva game and she won’t be able to deny him the win if he makes it to the end. “If someone the person who everyone is saying is going to win lasts over me… I think that means he is playing a hell of a game and I’d have to vote for him at the end,” she said.

This is the kind of statement that would shake most houseguests, but the Cookout ain’t gonna turn on each other now even though it’s best for all of their individual games to boot X instead. Tiffany all but told Claire about the Cookout , so people stonewalling her pitches ought to confirm what she has to be suspecting.

SEE ‘Big Brother 23’ spoilers: Tiffany all but comes clean to Claire about the Cookout while Alyssa thinks she’s a ‘f—ing genius’

Part of Claire’s pitch included targeting Derek F. , whom she thinks everyone will want to drag to the end as a goat. They’ve figured out it’s a double eviction this week because the yard closed early, and Claire said that she would put up Big D and Alyssa with Azah being the renom if one wins Veto. Hannah is worried about Alyssa winning in the double and getting targeted since Tiff can’t play and if certain people (ahem, X and Ky) want to throw it, but Azah reassured her that Alyssa would target Ky and Tiff, and if either wins Veto, then one of Hannah or Azah would go up. Hannah then confirmed with Ky that he’s not going to win HOH unless he has to and said that she wants to win this HOH. He suggested that she use the tried-and-true “trying to break up a strong duo” reason when she nominates Alyssa and X. If Alyssa comes off, Hannah told Tiff that she’ll renom Big D and then the Cookout girls and Ky can decide who to evict. Hannah also suspects (actually, considering how perceptive she is, she knows) that the Cookout men have a deal, but Azah said she doesn’t think so. Yet another terrible read.

Meanwhile, Alyssa is still on her high of thinking she tricked Tiff into putting up Claire and will be blindsiding her. She thinks Ky will be giving Claire a sympathy vote and “strategized” with Big D about telling Hannah at the last minute that Claire doesn’t have the votes so she’ll vote with the house. “If this follows through and Claire leaves, Claire may respect the game move from all of us, and be like ‘OK, they are playing the game,'” she told Big D, who had to act like he had no idea what’s happening for the second day in a row. She really thinks she’s doing something here.

PREDICT who will win ‘Big Brother 23’

Sarah Jessica Parker has paid a heartfelt tribute to her late friend and colleague following his devastating death. The Sex and the City star said she was "utterly devastated" as she revealed the passing of George Malkemus, the co-founder of SJP Shoes. The actress wrote: "George D.Malkemus lll. February 23rd,...
CELEBRITIES・28 DAYS AGO
celebratingthesoaps.com

Days of Our Lives spoilers for next week of October 11 reveal that Abigail DiMera (Marci Miller) gets payback. Johnny DiMera (Carson Boatman) makes a casting change at the last minute. Instead of “Chabby” re-enacting a love scene, Chad DiMera (Billy Flynn) will be replaced. Imagine everyone’s shock when Abigail goes through with the love scene and kisses Chad’s brother.
TV SERIES・10 DAYS AGO
digitalspy.com

The Conners spoilers follow. The Conners aired a lovely episode last night (October 13) in the US, as Louise Goldufski became part of the family by marrying Dan Conner. But it wasn't all plain sailing, as a tornado threatened to completely derail the day. Thankfully, Jackie Harris stepped in and pronounced them husband and wife.
CELEBRITIES・3 DAYS AGO
Hello Magazine

Heo Sung-tae takes on the role of gangster and ringleader Jang Deok-su in Netflix's hit series Squid Game, and the show focuses on him being a bully, but you may be surprised to learn that his home life is oh-so different. Revealing his softer side, the actor clearly has a heart of gold unlike his on-set persona and in real-life he is a pet parent to two adorable cats.
WORLD・2 DAYS AGO

‘The Masked Singer’ spoilers: Who is Hamster?

“The Masked Singer” season 6 continues the twist of the Wildcards that was introduced last season. Six celebrities who aren’t part of the original line-up of 10 stars who comprised Group A and Group B get to jump into the competition after it has started. The first of these, the Hamster, appeared in night two of the super-sized premiere, which aired on FOX on September 23. He returned to compete again on episode 4 on October 6. The Hamster replaced the Octopus, who was bounced from the competition at the end of episode 1 on September 22. When he pulled off...
TV SERIES・11 DAYS AGO
TVShowsAce

‘The Young and the Restless’ Weekly Spoilers: Will Anyone Stop Victoria’s Wedding?

“Big Brother 23” 2nd place finisher Derek Frazier talks Azah Awasum drama, explaining that he did not imply to harm her emotions and that he felt like she slept rather a lot within the first few weeks of the sport when he was “on the market doing rather a lot.”
TV & VIDEOS・12 DAYS AGO

It only took 21 years and 23 seasons for the American version of “Big Brother” to finally crown its first Black winner. Not only did this winner make history, the whole cast did. Early on this season, the six Black cast members aligned and vowed to remain loyal to each other in an alliance. The successful move was an effort to ensure the season’s winner would finally be a Black person.
TV & VIDEOS・13 DAYS AGO
cartermatt.com

The Oval season 3 episode 2 spoilers: Why is everyone on high alert?

Following tonight’s big premiere on BET, are you curious in learning more about The Oval season 3 episode 2 next week? Let’s just say that the start of the season is going to loom large for a while. Isn’t that what happens when you’re talking about an assassination attempt on the President’s life? This isn’t something that anyone comes back from easily; there is paranoia that another could happen, just as there is also a thorough review of anything and everything around you.
TV & VIDEOS・5 DAYS AGO
epicstream.com

Big Brother Season 24 Release Date, Cast News, Spoilers & Everything You Need To Know Ahead Of Premiere

We’ve got questions, and you’ve (maybe) got answers! With another week of TV gone by, we’re lobbing queries left and right about dozens of shows including Evil, Legends of Tomorrow, Chucky and Survivor! 1 | How could S.W.A.T.‘s Hondo show up and tell the others, “Let’s get back to work” if Deacon had just left Hicks’ office and there was zero indication Hondo would ever get his job back? 2 | Did Evil assemble the most random assortment of guests for David’s ordination party? And after nothing happened between David and Kristen following their conversation about how things would have been different if they’d...
TV SERIES・2 DAYS AGO
GoldDerby

It didn’t happen during the “Big Brother 23” game, but you can add another showmance to the “Big Brother” books: Derek Xiao and Claire Rehfuss are dating. The couple simultaneously shared Instagram posts on Thursday announcing their new status, accompanied by shots from their first official photo shoot as a couple. “ the absolute best thing to come out of the most stressful 3 months of my life,” Rehfuss wrote in her post. “Coming out of the Big Brother house has been overwhelming, but I’m so lucky to have had Queen Claire by my side making me smile and laugh everyday [sic]...
RELATIONSHIP ADVICE・3 DAYS AGO
Distractify

[Editor’s Note: The following review contains spoilers for “Succession” Season 3, Episode 1, “Secession.”] The Roy family has returned, and already they’re taking up chunks of premium real estate. Aside from the profiles, prominent billboards, HBO’s coveted Sunday night timeslot, and all the other hallmarks befitting the long-awaited emergence of TV’s only good show, “Succession” Season 3 starts with its split family in flight, and ends with the top two shit-stirrers in seemingly opposite straits: Kendall (Jeremy Strong) thinks he’s sitting pretty, while Logan (Brian Cox) goes sprinting into the Sarajevan night, searching for whatever next move might save him. In...
TV SERIES・6 HOURS AGO