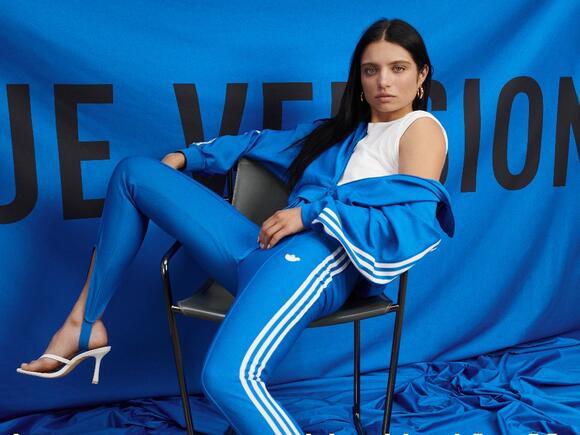 Adidas unveiled a number of new products, including an archive-inspired Blue Version collection and a collab with Bel-Air Athletics.

This content is for Limited, SJ Promo- 40% off, Annual, SJ Promo 50% off, $2/ Week and $3 / Week members only. You can read up to five free articles each month with a Limited Level Subscription. Please visit the site and log in, or subscribe to read.

A popular source of bodycon dresses, Y2K accessories and festival fashion for millennial and Gen Z, online retailer Revolve reveals a more conscious side in its latest collection. The retailer’s denim label, Lovers and Friends, recently launched a 14-piece collection of women’s jeans made with Recover’s circular fiber. Jeans in the collection include a minimum of 15 percent Recover recycled cotton fiber made from post-consumer denim. The collection, retailing for $128-$158, delivers on-trend shapes and washes in sizes 23-32. High-rise slim bootcut jeans, boyfriend fits with orange peel effects, slim straight jeans with a worn-in black wash and psychedelic laser prints are...
APPAREL・3 DAYS AGO
Sourcing Journal

Reebok is rolling out two tech-forward product lines designed to keep wearers warm from head to toe. This content is for Limited, SJ Promo- 40% off, Annual, SJ Promo 50% off, $2/ Week and $3 / Week members only. You can read up to five free articles each month with a Limited Level Subscription. Please visit the site and log in, or subscribe to read.
SHOPPING・6 DAYS AGO
Sourcing Journal

A planned footwear launch at the rising activewear brand, set to lap Nike in women’s next year, is on track despite recent Vietnam backlogs. This content is for Limited, SJ Promo- 40% off, Annual, SJ Promo 50% off, $2/ Week and $3 / Week members only. You can read up to five free articles each month with a Limited Level Subscription. Please visit the site and log in, or subscribe to read.
APPAREL・5 DAYS AGO
People

If you've been waiting for the right moment to upgrade your sneaker collection, now's the time to move quickly, and scoop up a few pairs for the entire family while you're at it. Amazon just quietly slashed prices on countless comfy Skechers sneakers for women, men, and kids, and these rock-bottom prices won't last for long.
SHOPPING・6 DAYS AGO

In the trailer you’re about to see, Microsoft launched a new pair of sneakers with Adidas. These sneakers are a “partnership 20 years in the playing”, looking back on the past couple of decades of the existence of Microsoft’s one and only gaming console. This first consumer release is just that – the first – there’ll be more revealed “over the next few months” as well.
VIDEO GAMES・14 DAYS AGO
geekculture.co

Sneaker and geek culture has been increasingly intertwined over the past few years. After all, sneakers have been an accessory for anyone looking to express their individuality. PlayStation had done it first, with rather tasteful collaborations in the past. But XBOX’s attempt still needs a great deal of improvements. While...
VIDEO GAMES・14 DAYS AGO
inputmag.com

Y-3, the fashionable sportswear line from Japanese designer Yohji Yamamoto and Adidas, is turning to another offshoot from the Three Stripes banner ahead of winter. Together with Adidas Terrex, Y-3 is launching a brand new sneaker-boot silhouette that’s as menacing in its appearance as it is in function. The Swift R3 GTX boasts a GORE-Tex lining and membrane for waterproofing as well as a Continental outsole favored in the outdoor space for its traction in both wet and dry conditions. To keep your feet secure, a wide lacing system is combined with a zip closure, underneath which is a neoprene gusset that’ll hug you like a sock.
APPAREL・14 DAYS AGO
inputmag.com

Adidas made Xbox-themed sneakers to honor the console’s anniversary

To celebrate the 20th anniversary of Xbox, Adidas has unveiled a new pair of sneakers modeled after the gaming console. Dubbed the “Xbox 20th Forum Tech,” the shoe features translucent green details inspired by the special edition Xbox released for the launch of Halo: Combat Evolved way back in 2001.
VIDEO GAMES・15 DAYS AGO

If you’re looking to step up your wardrobe this fall, your moment is coming. October 10 marks adidas’ annual Boost Day and you don’t want to miss out on the celebration. A big part of the festivities includes the chance to win the ultimate Boost sneaker pack, which comes with a pair of Ultraboost 21s, Free Hikers, ZX 2Ks, and an adidas Boost ball collector’s item. To learn more about how to win, visit the adidas website on Boost Day. Of course, the party doesn’t stop with the giveaway.
BEAUTY & FASHION・13 DAYS AGO
Riverside Press Enterprise

Fans of fashion and music will once again be able to try on the latest sneakers and jump around to hip-hop beats live and in person when ComplexCon jumps out of the online world and back into the Long Beach Convention Center Nov. 6-7. Tickets are on sale for the...
LONG BEACH, CA・14 DAYS AGO
Footwear News

A new sneaker from Kanye West’s acclaimed Adidas Yeezy line is reportedly dropping soon. According to Yeezy Mafia on Instagram, the latest Adidas Yeezy BSKTL Knit will hit shelves in the “3D Slate Blue” makeup before year’s end. The Yeezy insider also shared an image of the shoe on its social media account to give fans an idea of what’s expected to release. The Yeezy BSKTL Knit “3D Slate Blue” iteration will don a predominantly black color scheme on the upper that’s coupled with blue stripes woven into the bottom portion of the material. Adding to the look are black shoelaces,...
APPAREL・14 DAYS AGO
sirusgaming.com

Xbox is currently celebrating its 20th anniversary and to help kickstart the celebrations, have partnered up with Adidas to unveil their first ever console inspired sneakers collaboration, the Xbox 20th Forum Tech. The pair of sneakers features a theme that was clearly inspired by the Halo: Combat Evolved special edition...
TECHNOLOGY・14 DAYS AGO
Stuff.tv

Neon green defined the Nineties. But just as it heralded a new era for gaming, so Microsoft’s mighty Xbox reclaimed the colour for the new millennium. With more than a little help from Halo, the console quickly became synonymous with a delightfully lurid shade of sage. Fitting, then, that Adidas is using an equally vibrant colour palette to celebrate 20 years since the first-gen Xbox landed in living rooms. Loud enough to leave you squinting, the Adidas Originals by Xbox double-down on the lime and lawn aesthetic. Slightly subtler is the scripted detail on the side, which nods to the system's Seattle birthplace. Button-mashing might have moved on, but for the gamers who pick up these kicks, their sole will always be green. Due later this year, we await word on pricing and production numbers.
VIDEO GAMES・14 DAYS AGO
sneakernews.com

Documentaries relating to technological and design advancements on American soil usually include mention of the World’s Fair, which last took place in New Orleans in 1984. Sneaker Politics, which is headquartered in the Louisiana destination, has recently turned to the event for inspiration as it worked on the adidas EQT Prototype.
NEW ORLEANS, LA・14 DAYS AGO
hotnewhiphop.com

Kanye West is one of the richest artists in the world and it is all thanks to his Yeezy brand that has taken the world by storm. Over the last few years, Yeezy has become the premiere sneaker brand in the world and with the help of Adidas, millions upon millions of pairs have been sold. Ye has delivered plenty of great silhouettes to the world, including the entire 700 series which boasts the likes of the Adidas Yeezy 700 V3. This dad shoe has received quite a few colorways, and this year, it is set to get at least one more.
APPAREL・14 DAYS AGO
hotnewhiphop.com

Adidas has officially partnered with Xbox for a co-brand sneaker series, as images of the new Xbox x Adidas Forum Tech Shoe were released Wednesday. Complex hinted at the upcoming collaboration earlier this year, and now the gaming company has confirmed it in the wake of Xbox’s 20th Anniversary celebration.
BUSINESS・14 DAYS AGO
The Next Web

As someone who’s bought the same model of sneakers three times in a row (Reebok Classics with the gum sole FYI), I’ve fallen slightly behind the fashion curve. But my footwear could soon evolve from passé to trendsetting. A new websiteflaunts thousands of unique sneakers that would make me a...
APPAREL・9 DAYS AGO
inputmag.com

After collaborating with Adidas on some of the coolest yoga attire you’ll ever see, Palace is now focusing its attention on running with stripes. The close partners return with a new capsule headlined by two colorful variants of the Ultra Boost 21. Available with either a black or white upper, Palace’s Ultra Boosts feature a chaotic, multi-color grid not unlike the Tube map in the brand’s hometown of London. And just like Adidas’ other Ultra Boost 21s, the sneaker is made using a knit Primeblue fabric made from “at least” 50-percent recycled Parley ocean plastic — the sustainability of which Palace chose to highlight in a hilarious promotional video.
APPAREL・10 DAYS AGO
GreenBiz

Shoemaker Adidas is launching its Choose to Give Back program that lets people send used products — apparel, accessories and sports gear such as running shoes and soccer jerseys — from any brand back to the company to be reused or resold on an online marketplace. The program will be supported by ​​ThredUp’s Resale-as-a-Service (RaaS) platform and expertise.
APPAREL・13 DAYS AGO
Footwear News

It’s a match made in luxury heaven. The Edit LDN, a major luxury sneaker resale and consignment platform, has just opened up its first physical location as a shop-in-shop in Harrods, London’s iconic 172-year-old department store. The store within a store concept opened earlier this month and was brought to life via a partnership between The Edit and Kurt Geiger, which manages footwear for Harrods and Selfridges. This shop-in-shop marks the first-ever physical location for the consignment and resale platform since it began its life as a website in 2020. “We saw a beautiful marriage of two brands because we purposefully pitch ourselves...
APPAREL・6 DAYS AGO