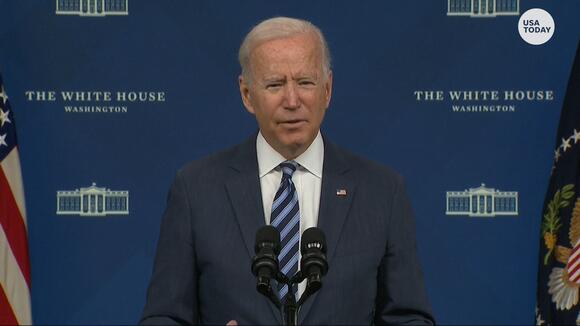 The claim: Joe Biden added more jobs in a single month than Donald Trump netted during his entire term

Americans compare presidents all the time. But a post on social media claims one difference between President Joe Biden and his predecessor is particularly stark.

“MAJOR BREAKING: Biden adds 943k jobs — more jobs in a single month than Trump netted during his ENTIRE TERM. Are you glad Biden is President?” reads an Aug. 30 Facebook post .

Strictly looking at the numbers, the claim is accurate. But experts say comparing one president’s good month to four years of fluctuating job numbers is misleading.

Fact check: 'Who's vaccinated?' All living presidents, governors; not most COVID-19 victims

The job market has grown steadily under the Biden administration, according to numbers from the U.S. Bureau of Labor Statistics. But experts say the president can't take all the credit.

July was the best month of the summer, with total nonfarm employment rising by more than 1 million. That figure was adjusted from 943,000 – the number in the claim – in the bureau’s August employment report .

When Trump was inaugurated in January 2017, there were nearly 145.6 million employed Americans, according to data from the Bureau of Labor Statistics. By December 2020 , his last full month in office, there were about 142.6 million total nonfarm employees — about 3 million fewer than when Trump took office.

Looking at the numbers alone, the claim is accurate. But experts say it’s a misleading way to compare the data.

“It is a bit unconventional to compare net jobs over a 4-year period to a single one-month change in employment,” Mary Ann Bronson , an economics professor at Georgetown University, said in an email. “The latter will always have much higher variance, be subject to seasonal fluctuations, and of course also to other short-run fluctuations (especially in the current health environment).”

Bronson said a more meaningful analysis would address the unique circumstances of Trump's time in office, such as net job creation under the Trump administration prior to the pandemic, how the first months of pandemic job losses compared to other countries and how much employment recovered in the U.S. compared to those countries.

But Dean Baker , a senior economist at the Center for Economic Policy Research, said a meaningful analysis is rarely the goal when comparisons such as this are made.

“It is certainly not a fair comparison, but it is standard for what passes in political debates,” he said in an email.

Baker said after the stock market crashed in 2008, former President Barack Obama assumed office amid an economic “free fall,” when nearly 700,000 jobs were disappearing each month. Despite the fact that Obama inherited that economy, critics used the crisis as an opportunity to place blame.

“Obviously, this had nothing to do with anything Obama did, but that didn't prevent Republicans from blaming him for the huge loss of jobs at the start of his administration,” Baker said. “Presidents always get blame/credit for the bad or good things that happen on their watch, even if they had little to do with it.”

Based on our research, we rate MISSING CONTEXT the claim that Biden added more jobs in a single month than Trump netted during his entire term. Strictly looking at the numbers, the claim is accurate. But experts say comparing one month of job data to employment numbers from a president's entire four-year term is misleading, particularly given the economic impact the pandemic had during Trump's term..

Pretty amazing only took trump a year or so to straighten out Obummers 8 years of chaos. Only took basement Biden several executive orders to out us back where we were.

lol.. Biden is not responsible for reopening the economy... those dem govs put off reopening until biden was in office so it looked skewed... we are still not back to pre March 2020 numbers.. nothing has been added.. kinda hard to add jobs when you are shipping them offshore by the 10s of 1000s..

The National Archives concluded the documents were relevant to the panel’s investigation, but lawmakers chose to "defer" the request after talks with the Biden White House.
POTUS・17 HOURS AGO
USA TODAY

President Joe Biden's administration is poised to bring back the "Remain in Mexico" policy that denies asylum seekers safety in the United States.
PRESIDENTIAL ELECTION・2 HOURS AGO
POLITICO

It cites earlier rationale for rejecting claims in turning these new ones down. Here's the deal: President Joe Biden has rejected two additional requests by former President Donald Trump to shield sets of documents from the panel investigating the Jan. 6 insurrection, according to a new letter obtained by POLITICO.
PRESIDENTIAL ELECTION・2 DAYS AGO
AFP

President Joe Biden said Monday he hopes Democrats will strike a deal on two massive spending packages this week and make America the "most advanced country in the world" again. Speaking at the start of a crucial period for his presidency and the Democratic Party's wider fortunes, Biden urged a deal on a social spending bill expected to weigh in at a little less than $2 trillion and an infrastructure bill worth $1.2 trillion. He said he wanted a deal by the end of this week, when he flies to two summits in Europe. "That's my hope," he told reporters, adding that talks on Sunday with one of the main obstacles to agreement, moderate Democratic Senator Joe Manchin, "went well."
PRESIDENTIAL ELECTION・2 DAYS AGO

(CNN) — President Joe Biden has once again refused to assert executive privilege over more documents that former President Donald Trump has sought to keep out of the hands of the committee investigating the January 6 attack on the US Capitol. According to a letter obtained by CNN, White House...
POTUS・2 DAYS AGO
WashingtonExaminer

President Joe Biden made a number of false or misleading claims at a town hall event in Baltimore on Thursday as he attempted to sell his party's spending legislation.
BALTIMORE, MD・5 DAYS AGO
MSNBC

The Republican Party doesn't have a platform. Or a policy agenda. Or substantive issues it's eager to work on. Or compelling leaders who are ready to govern. What defines the contemporary GOP — the one thing that animates the party more than anything else — is an unshakable belief in a ridiculous lie about Donald Trump's 2020 defeat. The former president boasted at an Iowa rally this past weekend, "It's the single biggest issue, the issue that gets the most pull, the most respect, the biggest cheers is talking about the election fraud of the 2020 presidential election."
POTUS・13 DAYS AGO

Fact check: Trump, not Biden, made comment about taking guns without due process

Under President Biden, gas has averaged roughly $3 a gallon. During the Trump presidency, gas averaged $2.57 a gallon.
PRESIDENTIAL ELECTION・14 DAYS AGO
Deadline

President Joe Biden plans to name Jessica Rosenworcel as permanent chair of the FCC, while he will nominate Gigi Sohn to fill a vacancy on the commission. Lobbyists and lawmakers have been buzzing for months over the delay in Biden’s decision over the commission, which has been deadlocked 2-2 between Republicans and Democrats since he came into office. Rosenworcel, who has been acting chair, will be the first woman to become permanent chair of the 87-year-old commission. Biden also nominated her for an additional term. Sohn, a longtime public interest advocate who served as counselor to FCC Chairman Tom Wheeler, who served during...
PRESIDENTIAL ELECTION・1 DAY AGO
spectrumnews1.com

WASHINGTON (AP) — President Joe Biden botched the numbers behind the COVID-19 vaccine rollout Thursday as he stretched to take all the credit for the surge of shots once he was in office. A look at his remarks during a CNN town hall event:. COVID. BIDEN: “When I first was...
PHARMACEUTICALS・6 DAYS AGO

Poll: More Americans, Led By Democrats And Independents, Are Increasingly Losing Faith In Biden To Pull The Economy Out Of A Nosedive

In one sense when he took office President Joe Biden was given a field of cushy political clover to walk through. Because of COVID-related fear and lockdowns, the high-octane Trump economy roared to a halt. Accordingly, once scientists better understood how to treat the virus, and the Trump administration ushered...
PRESIDENTIAL ELECTION・22 HOURS AGO
uticaphoenix.net

George Clooney attributed President Joe Biden’s falling poll numbers to how former President Donald Trump left the country after his time in office. Clooney supported Biden’s campaign in the 2020 presidential election and said the nation needs to recover from a Trump presidency. “It’s like taking a battered child and...
PRESIDENTIAL ELECTION・12 DAYS AGO
USA TODAY

A regular gallon of gas wasn't below $2 the day Biden took office, and presidents have little influence over fuel costs, contrary to one viral post.
PRESIDENTIAL ELECTION・12 DAYS AGO
WIFR

(CNN) - Roughly nine months into his presidency, Joe Biden is on the verge of writing his name into the history books -- and not in a good way. The latest polling from Gallup pegs the President’s approval at just 42%, the lowest of his term to date and the second-lowest of any president Gallup has measured at this moment in their presidency over the last almost five decades.
PRESIDENTIAL ELECTION・1 DAY AGO

WASHINGTON — The Senate confirmed two Republicans nominated by President Joe Biden to top diplomatic posts Tuesday. Former Arizona Sen. Jeff Flake was confirmed as U.S. ambassador to Turkey, and Cindy McCain, the widow of GOP Sen. John McCain of Arizona, will be the country's representative at the United Nations Agencies for Food and Agriculture.
CONGRESS & COURTS・1 DAY AGO
POLITICO

With help from Rishika Dugyala, Bianca Quilantan, Nancy Vu and Teresa Wiltz. What up Recast family! The President and Democrats inch closer to a framework on the sprawling human infrastructure plan and Biden is set to stump in Virginia with a week to go before gubernatorial elections there. But we kick things off today with the filibuster and the president signaling his willingness to modify Senate procedures.
PRESIDENTIAL ELECTION・1 DAY AGO
KTVZ

President Joe Biden on Tuesday excoriated Virginia Republican Glenn Youngkin during his final event with Democrat Terry McAuliffe ahead of next week’s election, repeatedly comparing the gubernatorial candidate to former President Donald Trump. Biden’s remarks were a point-by-point upbraiding of both Youngkin and Trump, building on a campaign-long strategy by...
VIRGINIA STATE・17 HOURS AGO
USA TODAY

An executive order dealing with American investments in Chinese companies is not related to the current cargo backlog at U.S. ports.
U.S. POLITICS・19 HOURS AGO