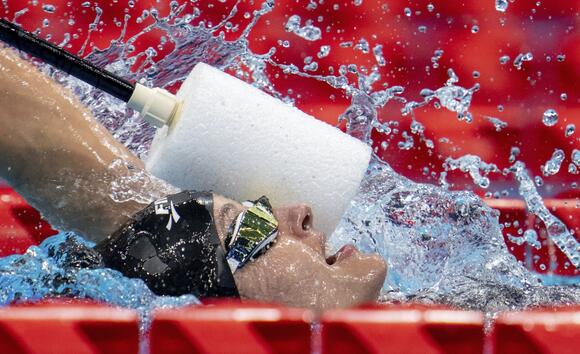 T eam USA's Paralympic team was bolstered in Tokyo by active-duty and U.S. military veterans who won eight medals for their country.

They won three gold, three silver, and two bronze medals, according to the Military Times .

US WOMEN BEAT CHINA TO RETAIN PARALYMPIC VOLLEYBALL GOLD: 'WOMEN CAN DO ANYTHING THEY PUT THEIR MIND TO'

Retired Army Maj. Shawn Morelli, who served as an engineer in Afghanistan and Iraq , took home gold in road cycling and silver in track cycling.

Bradley Snyder, a retired Navy lieutenant who lost his eyesight due to an improvised explosive device in Afghanistan, won gold in the triathlon.

Marks, who lost a leg after injuring her hips in Iraq, obliterated the world record in the women's 100-meter backstroke to win gold, captured silver in the 50-meter freestyle, and took bronze in the 50-meter butterfly.

Hennagir lost both legs and part of his left hand to an IED in Iraq near Fallujah.

Pinney broke his back in a 2012 BMX race, and De Los Santos suffered a traumatic brain injury and lost his right leg due to a rocket-propelled grenade attack in Afghanistan.

These eight medals were part of the 104 total Team USA brought home from the games, including 37 gold, 36 silver, and 31 bronze.

FOUR COLIN POWELL MYTHS: Much has been written and said over the past day as we learned of the death of former Joint Chiefs Chairman and Secretary of State retired Gen. Colin Powell at age 84 from complications of COVID-19. Powell’s place in history is firmly cemented as one of America’s finest military leaders, and accolades have been pouring in from all quarters.
WASHINGTON, DC・10 HOURS AGO
USA TODAY

SAN DIEGO (KUSI) – CAF athlete Justin Phongsavanh took home the bronze after the Tokyo Paralympics in Tokyo. Phongsavanh is paralyzed from the waist down, but didn’t let that stop him from becoming one of the best javelin throwers in the world. He discussed his latest accomplishment with KUSI’s Paul Rudy.
SAN DIEGO, CA・14 DAYS AGO
Tyler Morning Telegraph

The 14th Annual Pro-Am on Monday concluded a weekend honoring soldiers, their families and other American military personnel who were seriously injured in Afghanistan or Iraq combat operations. For a story on the event, click here. For photos from the parade, click here.
TEXAS STATE・14 DAYS AGO

The team race is final between Japan and the USA in Women’s Freestyle at the 2021 World Championships in Oslo, Norway. Take a look below to see the final standings and a summary of the action that occurred leading up to this point. Japan Wins Title With 9 Medals. Japan...
SPORTS・12 DAYS AGO
hngnews.com

When he was 11 years old, John Boie discovered what he wanted his future to hold. All that was left was to accomplish those goals. So Boie went to work. It took 19 years of effort—and, thanks to COVID-19’s impact on the 2020 Paralympic Games, a year of waiting—for Boie to transform from a kid attending his first youth wheelchair basketball camp at UW-Whitewater to a 30-year-old at the top of the medals stand at the Tokyo 2020 Paralympic Games.
MILTON, WI・12 DAYS AGO
ClickOnDetroit.com

There will be up to a total of 296 cross-country skiers – 148 male, 148 female – competing at the 2022 Beijing Winter Olympics. Each nation can send up to 16 athletes, with a maximum of eight males or eight females. A nation may have no more than four athletes compete in any one event.
SPORTS・7 DAYS AGO
ClickOnDetroit.com

There will be up to a total of 284 freestyle skiers – 142 male, 142 female – competing at the 2022 Beijing Winter Olympics. Each event has a maximum number of competitors that may participate. Big air and slopestyle are calculated as one event. Ski Cross: 32 male, 32 female...
SPORTS・7 DAYS AGO

Last week, 2022 Nebraska commit Bekka Allick was in Durango, Mexico, leading the United States U18 volleyball team to the bronze medal in the World Championships. On Tuesday, she was back with her high school teammates at Waverly, guiding the Vikings to a 3-1 win over Wahoo on Waverly’s senior night. After spending a few weeks away form her teammates — including her twin sister Hannah — Bekka Allick said she was happy to be back.
WAVERLY, NE・12 DAYS AGO
NBC26

Crafton Hills College (CHC) alum Laura Goodkind crossed the finish line for Team USA on the world stage in Tokyo during the 2020 Paralympic Games. It was the second appearance (Goodkind’s first was 2016) at the Paralympics for the rower and 2009 CHC graduate. During both the 2016 Rio and 2020 Tokyo Paralympics, Goodkind competed in the mixed double sculls event and placed tenth in their event for both Games.
WHITTIER, CA・6 DAYS AGO
webster.edu

The Webster University chess team won more titles than any other participating school at the 2021 U.S. Collegiate Rapid and Blitz Individual Championship held Sept. 25-26. Under the leadership of new coach Liem Le, considered the youngest collegiate grandmaster head coach in the U.S., the Gorloks won national titles in the Individual Rapid, Individual Blitz and the Collegiate Rapid competitions:
WEBSTER GROVES, MO・6 DAYS AGO

CHARLOTTE, N.C. — A paralympic swimmer from North Carolina won two gold medals at the 2020 Tokyo Paralympic Games this past summer. It was an achievement she had dreamed of since childhood. What You Need To Know. Hannah Aspden won a gold medal in the 100-meter backstroke at the 2020...
CHARLOTTE, NC・7 DAYS AGO
BlackAmericaWeb

Since Tommie Smith and John Carlos in 1968, a few other Black athletes have made history at the Olympics in a number of historic ways. In honor of the duo, let's take a look at times where the 200 Olympics was Black, bold and bigger than ever.
SOCIETY・1 DAY AGO
Taylor Daily Press

The European team won the last edition of the 2018 Ryder Cup in Paris. Last year, the Valuable War was canceled due to the corona. Europe has won four of the last five editions. The American team last won in 2016. After the first day, the United States took a...
GOLF・4 DAYS AGO