AllTitans is a FanNation channel covering the Tennessee Titans 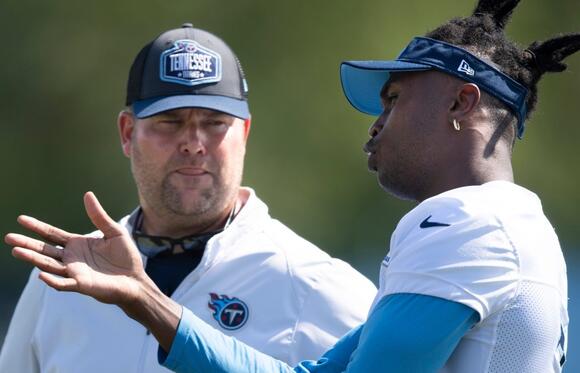 ESPN’s Field Yates reported the move, which changed most of Jones’ 2021 salary into a signing bonus and added two voidable years (2024-25) to the end of the deal.

Jones’ salary cap number is now $4.1 million, down from the $15.3 million it was when the Titans acquired him in a trade with the Atlanta Falcons. At the time of the deal, the Titans reworked quarterback Ryan Tannehill’s contract in order to fit the seven-time Pro Bowler on to the roster.

Jones gets $14 million this year as a signing bonus, and – for salary cap purposes – that bonus is prorated over the remainder of the deal, including the voidable years, at $2.8 million per season. Tennessee gets $11.2 million of cap space.

According to OverTheCap.com, Tennessee now has $5,612,039 of salary-cap space, which is more than half of the teams in the NFL.

Jones missed significant time during training camp with an injury and did not play in any of the preseason games. He has taken part in workouts in recent days and is expected to play Sunday when Tennessee hosts the Arizona Cardinals in the season opener.

“It is important that we spend time together talking about the details of concepts,” offensive coordinator Todd Downing said recently. “I think that he has been working really hard in meetings, working with [wide receivers coach] Rob [Moore] and doing everything that he is able to do.”

That includes reworking his contract.

As if a blowout loss to the Tennessee Titans was not enough headache for the Kansas City Chiefs, the team also lost quarterback Patrick Mahomes in the fourth quarter after he was hit in the head. Fortunately, though, head coach Andy Reid gave an update on his injury and noted that Mahomes has been cleared of the concussion protocol.
17 HOURS AGO
FanSided

Julio Jones made a Julio Jones play during Monday Night Football between the Tennessee Titans and Buffalo Bills. Wide receiver Julio Jones has made some incredible catches throughout his NFL career. But on Monday night, he had probably the most impressive circus catch of all time. When facing the Buffalo...
6 DAYS AGO
ClutchPoints

The Tennessee Titans gutted it out against the Buffalo Bills on Monday to escape with a nail-biting 34-32 victory. It was a hard-earned win, to say the least, with the Titans improving to 4-2 after six weeks of action. Running back Derrick Henry starred for the Titans, scoring three touchdowns,...
6 DAYS AGO
AllTitans

The Tennessee Titans are planning to play without Pro Bowl punter Brett Kern on Sunday. Or at least they have made sure they are prepared to do so. NFL Network reported Thursday morning that the Titans have signed veteran Johnny Townsend to the active roster. The team confirmed the news later in the afternoon.
24 DAYS AGO

NASHVILLE – The Tennessee Titans continue to play it safe with Julio Jones. That is why, coach Mike Vrabel said Monday, the seven-time Pro Bowler was on the field sparingly after halftime—and not at all in the fourth quarter—of Sunday’s 25-16 victory over the Indianapolis Colts at Nissan Stadium. Even...
27 DAYS AGO
USA TODAY Sports Media Group

After 10 amazing years in Atlanta, the Falcons traded All-Pro wide receiver Julio Jones to the Tennessee Titans over the offseason. Jones, 32, missed the Falcons’ final four games of the 2020 season and has already missed two games this year for the Titans due to a hamstring injury. Following...
6 DAYS AGO
AllTitans

Quotes of Notes: Colts on Loss to Titans

NASHVILLE – The Tennessee Titans never trailed in their 25-16 victory over the Indianapolis Colts on Sunday, but the never quite put away their division rivals either until the final minute. The Colts forced the game’s only three turnovers (two interceptions and a fumble) and turned the first two into...
NFL・28 DAYS AGO
AllTitans

The Tennessee Titans flexed some divisional muscle with their Week 3 victory over the Indianapolis Colts. That one firmly positioned the Titans (2-1) atop the AFC South and made them one of five teams to have sole possession of first place headed into Week 4. “I mean it is good...
24 DAYS AGO

Search for Outside Linebacker Help Continues

NASHVILLE – The Tennessee Titans figured they only needed John Simon for the preseason. They were wrong. Tuesday, the Titans signed the veteran outside linebacker to their practice squad. They also added defensive lineman Caraun Reid to that unit, but Simon’s return is an indication that edge rushers remain a position of need.
19 DAYS AGO
AllTitans

NASHVILLE – In moves that electrified the team’s fan base during the offseason, the Tennessee Titans made significant additions to both the offense and defense. The free-agent signing of edge rusher Bud Dupree – at a cost of $82.5 million over five years – figured to greatly improve a woeful pass rush. The trade for wide receiver Julio Jones – at a cost of second- and fourth-round draft picks – figured to turn an already offense into a particularly potent one.
28 DAYS AGO
AllTitans

WRs Coach Says He Asked Too Much of Jones, Brown in Week 1

NASHVILLE – Tennessee Titans wide receivers coach Rob Moore said he probably asked too much, too quickly from Julio Jones and A.J. Brown when the season began. That admission Tuesday might provide another clue into why Jones sat out the entire fourth quarter of last Sunday’s win over Indianapolis, which was a one-possession game for much of that stretch.
26 DAYS AGO
AllTitans

Titans Find Pass Rush Help in Their Past

NASHVILLE – The Tennessee Titans needed some pass rush help. They found it in their past. Tennessee signed outside linebacker Sharif Finch on Tuesday, the same day franchise officials placed two other outside linebackers, Derick Roberson and Rashad Weaver, on injured reserve. Additionally, defensive lineman Andrew Brown was released from the practice squad.
26 DAYS AGO

By almost any measure, the Tennessee Titans’ 27-24 overtime loss to the New York Jets on Sunday was a disaster. The Titans (2-2) scored on their first three possessions yet could not put the game out of reach against a winless opponent. They led by a touchdown early in the fourth quarter yet trailed by seven just over four minutes later against a team that did not score a touchdown in its previous two games. They could not protect their quarterback. They gave up too many big plays. On and on it went all the way until kicker Randy Bullock missed a 49-yard field goal attempt in the final minute of overtime that would have at least salvaged a tie.
21 DAYS AGO
AllTitans

NASHVILLE – Less than a month into the 2021 NFL season, some of the Tennessee Titans’ best players – A.J. Brown, Julio Jones, Bud Dupree and Taylor Lewan – have already spent time on the injury list. Lewan sat out Week 2, while Dupree will miss his second straight game...
23 DAYS AGO
AllTitans

How the Titans are Different From Other First-Place Teams

NASHVILLE – The Tennessee Titans are one-of-a-kind. And not in a good way. As the 2021 NFL season entered its fifth week, the Titans were one of 14 teams that led their respective divisions outright or were tied for first place. And they were the only one of the 14 that had not won at least three games.
15 DAYS AGO
AllTitans

Seven Sacks a Surprise? Not Really

No one can say it was a surprise. New York Jets coach Robert Saleh talked last week about how aggressive he likes to get with his defense on third down, and Tennessee Titans coach Mike Vrabel expressed concern about how physical and disruptive the Jets’ defensive front could be. Therefore,...
21 DAYS AGO
Sportsnaut

WATCH: Tennessee Titans’ Julio Jones with one of the greatest catches ever

Defense Misses Its Chance to Win the Day

If ever there had been a game for the Tennessee Titans’ beleaguered defense to make itself useful – to show that it could carry the load for a change – surely Sunday was it. The Titans entered the contest against the Jets without Pro Bowl receivers Julio Jones and A.J....
21 DAYS AGO
AllTitans

NASHVILLE – Quarterback Ryan Tannehill will have to find some different targets Sunday. The Tennessee Titans have ruled out wide receivers Julio Jones and A.J. Brown for the game against the New York Jets. Both missed a third straight day of practice Friday due to hamstring injuries. Also ruled out...
NFL・23 DAYS AGO
AllTitans

As if Derrick Henry did not have a big enough role for the Tennessee Titans already. Wide receivers A.J. Brown and Julio Jones are among the Titans’ inactives for Sunday’s game against the New York Jets at MetLife Stadium, which makes it likely that head coach Mike Vrabel and offensive coordinator Todd Downing will rely on Henry and the run game more than ever.
21 DAYS AGO

AllTitans is a FanNation channel covering the Tennessee Titans