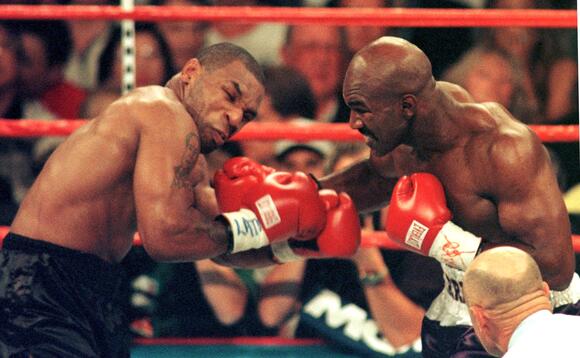 Triller’s Ryan Kavanagh, the boss of boxing streaming service Triller, says Mike Tyson is “too scared” to face his rival Evander Holyfield in the ring again.

The pair fought numerous times during their career, the most famous moment came as Tyson bit Holyfield in their world title bout . Rumours had started to swirl they were going to face off once again but no plans have come to fruition.

Kavanagh believes this is because Tyson doesn’t want to get knocked out by American compatriot.

He told Sky Sports : “We have been told that he is scared to fight Evander. There has been back and forth hoopla, there is a massive payday ready for Mike to fight on Thanksgiving. A massive payday, one of his biggest!

“But we can’t seem to push it along. Now I have heard, from a number of reliable sources, that Mike is too scared. He thinks Evander would knock him out.”

Several boxers have come out of retirement recently with David Haye announcing he will fight Joe Fournier on Holyfield’s upcoming undercard.

It has been a surreal few days in boxing after what can only be described as a fight for the ages in the heavyweight division. Tyson ‘Gypsy King’ Fury knocked out Deontay ‘Bronze Bomber’ Wilder in emphatic fashion last weekend in Las Vegas. Done so after getting decked a couple...
COMBAT SPORTS・2 DAYS AGO
boxingnewsandviews.com

Alexander Usyk of the Ukraine became boxing’s newest heavyweight champion last weekend with an emphatic display in the UK. A unanimous points decision over previous champion Anthony Joshua now sees Usyk and Tyson Fury hold all the heavyweight titles in boxing at this time. One former legend of the ring...
COMBAT SPORTS・17 DAYS AGO
firstsportz.com

Evander Holyfield returned to the boxing ring after more than 10 years. He faced the former UFC title contender Vitor Belfort in a boxing match and was beaten in the very first round of their contest. Holyfield looked slow and weirdly immobile in the contest, he just took punches from...
COMBAT SPORTS・10 DAYS AGO
primenewsghana.com

Tyson Fury’s trainer SugarHill Steward has made a huge claim by saying the heavyweight is better than Muhammad Ali, Mike Tyson and Lennox Lewis.Fury will look to further his legacy on Saturday as he defends his WBC belt in a trilogy fight with Deontay Wilder. The British star won the belt by defeating Wilder in their second bout with their first being ruled a split draw.Steward explained why he believes Fury is the greatest of all time, telling the Daily Mail: “I think about how Tyson has the characteristics of Lewis, Klitschko, Ali, Tyson and all the great heavyweights. He...
COMBAT SPORTS・7 DAYS AGO
SPORTbible

Mike Tyson believes Deontay Wilder should go 'all out' against Tyson Fury in their WBC world title showdown on Saturday and look to end the fight in the first 'five or six rounds.'. The Bronze Bomber is famous for his punching power and the American boxing legend feels that Wilder's...
LAS VEGAS, NV・11 DAYS AGO
Yardbarker

The former Heavyweight Champions Mike Tyson has responded to Deontay Wilder claiming that he would knock out Mike Tyson when he was in his prime. Deontay Wilder got knocked out by the Gypsy King in the early hours of Sunday morning UK time in Las Vegas. It was a cracking fight, but Tyson Fury showed his class and really does look like one of the best Heavyweights of all time.
COMBAT SPORTS・1 DAY AGO
Popculture

Mike Tyson says he will go head-to-head with Logan Paul or Jake Paul for the right amount of money. Tyson is looking for a $100 million paycheck. He made the revelation during his latest episode of Hotboxin' With Mike Tyson. "Hell yeah," Tyson told rapper Freddie Gibbs asked if he'd box the two YouTube sensations. "That would be a lot of money."
COMBAT SPORTS・14 DAYS AGO

It’s been nearly a year since Mike Tyson stepped into the boxing ring against Roy Jones Jr. in a fight that made a whole lot of money for everyone involved. That didn’t stop Tyson and his then-promotional partner Triller from splitting and getting into a legal fracas that may be delaying “Iron Mike” from scheduling another ‘super exhibition’ bout.
COMBAT SPORTS・12 DAYS AGO
fightsports.tv

The Tyson Fury-Deontay Wilder trilogy fight is just days away, and a pair of former undisputed heavyweight champions weighed in on the upcoming action. Mike Tyson said he thinks Wilder should “go all out” in the first half of the WBC world heavyweight title fight against Fury on Saturday, October 9. Meanwhile, Evander Holyfield said he would prefer if Wilder took his time and stick to a game plan that fits his fighting style.
COMBAT SPORTS・11 DAYS AGO
International Business Times

Mike Tyson shared an interesting insight following Deontay Wilder’s loss to Tyson Fury. After the back and forth hoopla, Fury and Wilder settled the score in their heavyweight boxing rivalry with the former ending up to be the better fighter. Both colossal heavyweights traded hard punches and scored a knockdown...
COMBAT SPORTS・1 DAY AGO
MovieWeb

Could Mike Tyson be the next opponent for YouTuber turned boxer Logan Paul? After retiring from boxing following a loss to Kevin McBride in 2005, Tyson stepped out of retirement for an exhibition match against Roy Jones Jr. in November 2020. The result was controversially scored as a split draw. As it stands now, it's unclear when Tyson plans to get back into the ring for another fight, but boxing Logan Paul seems to be a good possibility.
COMBAT SPORTS・13 DAYS AGO

In another one of those oddities that has marked society during the pandemic, YouTube celebrities Jake Paul and Logan Paul have been making waves by nabbing victories in the boxing ring against seasoned athletes. There’s one significant figure who looks ready to square up in the ring against them – Mike Tyson.
COMBAT SPORTS・11 DAYS AGO
bjpenndotcom

Mike Tyson confirms interest in fighting the Paul brothers: “They don’t care about being beaten up for a hundred million dollars”

Mike Tyson confirmed his interest in fighting the Paul brothers, saying “they don’t care about being beaten up for a hundred million dollars.”. Tyson is 55 years old, but he is keeping himself in phenomenal shape. Last year, Tyson returned after a 16-year-layoff to take on rival Roy Jones Jr. in an exhibition boxing bout, which ended in a draw. Ever since then, there have been rumors that Tyson would fight again, but so far, there has been no opponent given to him. However, if Tyson does indeed fight again, then it appears as though his goal is to make the most amount of money. And the biggest draws right now in the world of boxing are, like it or not, Jake and Logan Paul.
COMBAT SPORTS・12 DAYS AGO
hotnewhiphop.com

The third season of Hotboxin' with Mike Tyson has been packed with noteworthy appearances from renowned Hip-Hop artists, from T-Pain and Waleto Kevin Gates and Joey Bada$$. For the latest episode of Mike Tyson's popular podcast, Freddie Gibbs serves as the show's special guest, and much like the Alfredo rapper's appearance on The Joe Rogan Experience earlier this year, this new episode of Hotboxin' is extremely entertaining.
COMBAT SPORTS・14 DAYS AGO
Cassius

Get Michael Buffer on the phone.
COMBAT SPORTS・13 DAYS AGO
dreddsinfo.com

Dr. Umar Johnson Says He Can Survive Five Rounds In A Boxing Match With Mike Tyson. A furious Dr. Umar Johnson has challenged Mike Tyson to a boxing match. He says he wants to step into the ring with the boxing legend. During a recent interview with Freddie Gibbs, Tyson...
COMBAT SPORTS・11 DAYS AGO
The Guardian

To boxing fans, Mike Tyson was a menacingly exciting presence in the heavyweight division as he made his professional debut in 1985 and worked his way towards a world title in 1986. To his opponents, he was a terrifying hurricane enveloping them and unleashing pain. Tyson won 15 fights in his first year as a professional before defeating 13 more opponents in 1986 on his way to clinching his first world title. At that stage of his career, everything came quickly. Just ask the men who faced him.
COMBAT SPORTS・8 DAYS AGO
KABC

(Undated) — Mike Tyson is vaccinated against coronavirus, but he didn’t want to be. The boxing legend told USA Today he was apprehensive of the shot and only got it because he has to travel internationally. Tyson said he decided to take the risk and feels great. He also said he thinks he might have had COVID-19 at one point.
COMBAT SPORTS・5 DAYS AGO
The Independent

Mike Tyson has claimed both Tyson Fury and Deontay Wilder “reached all-time great status” after completing their trilogy last weekend. The Briton knocked his American rival out in the 11th round in Las Vegas, defending his WBC world heavyweight title to dramatically settle their three-fight feud. And former world champion Tyson was delighted to watch “one of the greatest” fights unfold, with both men enhancing their legacies in the process. “Fury vs Wilder fight will go down as one of the greatest,” Tyson claimed. “Not for skill but for action and excitement. That fight was all guts, heart and...
COMBAT SPORTS・2 DAYS AGO