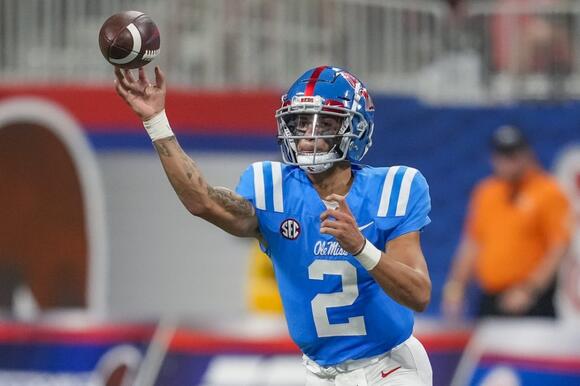 Matt Corral passed for 381 yards and a touchdown and added a rushing touchdown as Ole Miss rolled past Louisville 43-24 in the season opener for both teams Monday night in Atlanta.

Corral completed 22 of 32 passes and threw his touchdown to Dontario Drummond, who finished with 9 catches for 177 yards.

Snoop Conner rushed for two touchdowns and Jerrion Early rushed for one for Ole Miss. The Rebels played without head coach Lane Kiffin, who did not attend the game after announcing Saturday that he had tested positive for COVID-19. 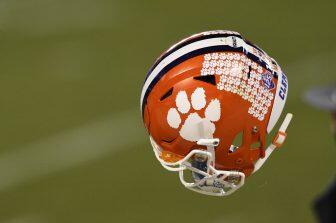 The Cardinals didn’t score until James Turner kicked a 38-yard field goal early in the third quarter, but Caden Costa answered with a 38-yarder of his own that gave the Rebels a 29-3 lead.

Malik Cunningham threw a 4-yard touchdown pass to Braden Smith on fourth and 3 to get Louisville within 29-10 at the end of the third quarter.

Conner’s 11-yard touchdown run increased the lead to 36-10 less than a minute into the fourth quarter.

Cunningham, the Cardinals’ leading rusher with 79 yards, ran a yard for a touchdown on fourth and goal midway through the period. He completed 22 of 37 passes for 191 yards with one touchdown and one interception. 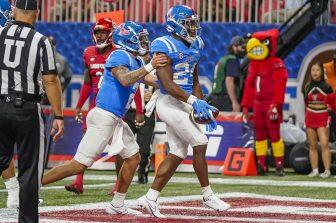 Corral and Drummond teamed on a 6-yard touchdown pass and Cunningham scored on a 9-yard run to complete the scoring.

The Rebels received the opening kickoff and drove 94 yards in 11 plays. Early rushed 1 yard for a touchdown and a 6-0 lead.

Costa added a 47-yard field goal that increased the lead to 9-0 at the end of the first quarter.

Ole Miss had another long drive in the second quarter as Corral’s 6-yard touchdown run completed a 9-play, 93-yard march that produced a 16-0 lead.

After a disappointing outing against Alabama last weekend, it didn’t take long for the Ole Miss offense to return with a fury. Ultimately, the Rebels won 52-21 in a shootout with Arkansas in Oxford which ended with nearly 1,300 yards of total offense and 60 first downs. The vast majority of Ole Miss’ offense was thanks to quarterback Matt Corral and one of his top running backs, Snoop Conner.
FOOTBALL・7 DAYS AGO
USA TODAY

The quarterback matchup pitched as the game’s biggest key went in the favor of Alabama sophomore Bryce Young, who threw for 241 yards and two scores.
COLLEGE SPORTS・14 DAYS AGO
On3.com

Matt Corral and the Ole Miss offense struggled Saturday against Alabama. The Rebels quarterback was 21 of 29 against the Crimson Tide, throwing for 213 yards and a touchdown. They finished with just 291 total yards to Alabama’s 451. But Ole Miss head coach Lane Kiffin does not blame the offense’s lack of production on Corral. Entering the game as a Heisman Trophy candidate, Corral did fumble the ball, which was recovered by the Crimson Tide. And Kiffin believes the players surrounding the quarterback did not do him any favors.
COLLEGE SPORTS・13 DAYS AGO
247Sports

Ole Miss ran into a buzz saw Saturday at Alabama, dropping a 42-21 decision to the top-ranked Crimson Tide. At one point, the Rebels trailed 35-0 early in the third quarter. Matt Corral lost his head-to-head competition against Bama quarterback Bryce Young, a showdown that was billed as a battle between the nation's top two Heisman contenders. But upon closer examination Corral played pretty well against the talented Bama defense. He finished the game 22-of-30 for 213 yards and one passing TD without an interception. He also ran for a touchdown.
ALABAMA STATE・14 DAYS AGO

After a 3-0 start, Ole Miss quarterback Matt Corral took the lead over Alabama’s Bryce Young heading into last week’s highly-anticipated matchup. Alas, the Crimson Tide defense humbled our Heisman hopeful by getting the Rebels off schedule and down early. Despite the 42-21 result, Corral still finished 21-for-29 passing for...
COLLEGE SPORTS・9 DAYS AGO
The Northeast Mississippi Daily Journal

Matt Corral doesn't do too much despite history with Razorbacks

OXFORD – Last season’s matchup with Arkansas was a complete disaster for Ole Miss quarterback Matt Corral. The redshirt junior thew six interceptions in the loss, four of them coming in the second half of a 33-21 loss in Fayetteville. While Ole Miss coach Lane Kiffin noted the team had...
OXFORD, MS・7 DAYS AGO
Steelers Depot

New to Steelers Depot, we will be highlighting several possible draft prospects the Pittsburgh Steelers may have interest in for the 2022 NFL Draft and their performance during the college football season. One of the most anticipated games of the slate last weekend pitted #1 Alabama against #12 Ole Miss...
ALABAMA STATE・9 DAYS AGO
Larry Brown Sports

Ole Miss quarterback Matt Corral probably wasn’t expecting to take a flying kick to the head as he went for a two-point conversion Saturday, but that’s exactly what he got. The Rebels had trailed 14-6 before scoring a touchdown during Saturday’s game against Arkansas. They opted to go for two...
NFL・7 DAYS AGO

One loss doesn’t seem to make a difference in this year’s Heisman race. Despite several candidates this year with 1 loss on their record, it doesn’t seem to affect their odds of winning the Heisman. According to DraftKings Sportsbook, the two favorites to win the award this year are two...
COLLEGE SPORTS・4 DAYS AGO
therebelwalk.com

OXFORD, Miss. — Ole Miss was on the winning end of a thrilling 52-51 win over Arkansas in Vaught-Hemingway Stadium Saturday. The game featured 103 points and 1,287 combined total yards of offense. In the end, the outcome came down to a failed two-point conversion that would leave the Razorbacks...
ARKANSAS STATE・7 DAYS AGO
USA TODAY Sports Media Group

It was an instant classic Saturday between Ole Miss and Arkansas, as the ranked SEC opponents traded big plays all afternoon long, with the Rebels eventually outlasting the Razorbacks for a 52-51 victory. The Hogs went for the win on a two-point conversion with no time remaining in regulation, coming...
ARKANSAS STATE・7 DAYS AGO
therebelwalk.com

OXFORD, Miss. — It is safe to say Ole Miss quarterback Matt Corral’s name is right where it should be — at the top of the Heisman conversation. The junior led the Rebels to a 52-51 win over then-No. 13 Arkansas Saturday and he was impressive in doing it. At the risk of distributing rat poison, here are five reasons Corral should be considered for college football’s highest honor.
ARKANSAS STATE・6 DAYS AGO

Heisman-hopeful quarterback Matt Corral is an elite talent for the Rebels offense, and Tennessee knows it. Corral has thrown a touchdown in 17-straight games and has completed 69% of his passes this season, without a single interception. He’s also racked up 255 rushing yards and eight touchdowns.
KNOXVILLE, TN・2 DAYS AGO
saturdaydownsouth.com

Matt Corral was the No. 4 pro-style quarterback of the 2018 recruiting class, but Saturday night he is showing that he is very much a “dual-threat” QB. Corral has put on a show Saturday night on Rocky Top. Corral started off 7-of-16 passing but finished the half 12-of-23 for 164 yards and a touchdown.
NFL・1 HOUR AGO
saturdaydownsouth.com

Matt Corral and the Ole Miss Rebels are playing well at Tennessee on Saturday night, holding a 31-19 lead as the game enters the fourth quarter. The play that extended the lead from 24-19 was a pass from Corral to WR Dontario Drummond, and it was a beauty. Apparently, Corral...
TENNESSEE STATE・21 MINUTES AGO
The Spun

The recruitment of 2023 five-star quarterback Arch Manning could end up coming down to two prominent schools. While Nick Saban tried to get a not-so-subtle pitch in to the Manning family on Monday night, the race for the quarterback prodigy might come down to two other schools. Georgia and Texas,...
FOOTBALL・17 DAYS AGO

While the dominant storyline around Alabama this week is the top-15 matchup against Ole Miss in Tuscaloosa on Saturday, college football fans have learned a fair amount about Alabama head coach Nick Saban’s family, too. On Thursday’s weekly “Hey Coach & The Nick Saban Show,” the Alabama coach shed some...
FOOTBALL・15 DAYS AGO
FanSided

No doubt about it, Nick Saban’s coaching cost Alabama vs. Texas A&M

Alabama head coach Nick Saban’s coaching cost in the fourth quarter cost them a win against Texas A&M on Saturday. The Alabama Crimson Tide were undefeated when walking onto Kyle Field on Saturday night. Sure, they had a close call earlier in the season against Florida, but did anyone believe that the Crimson Tide would struggle against Texas A&M? Well, the Aggies proved the nation wrong.
ALABAMA STATE・6 DAYS AGO