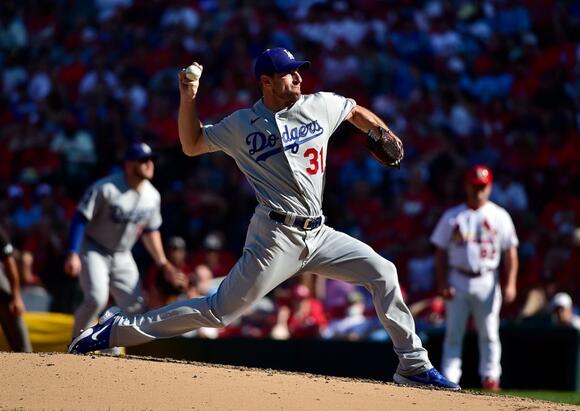 Max Scherzer struck out 13 batters and didn’t allow an earned run in eight innings as the visiting Los Angeles Dodgers shut down the St. Louis Cardinals 5-1 on Monday.

Chris Taylor hit a two-run homer for the Dodgers (87-51), who won for the fifth time in seven games to remain within one game of the first-place San Francisco Giants in the National League West.

Scherzer (13-4) dominated his hometown Cardinals, limiting them to six hits, no walks and one unearned run. He ran his season strikeout season to 210 and became the ninth pitcher in major league history to post nine seasons of 200-plus strikeouts.

The Dodgers have won all seven games Scherzer has pitched since arriving in a trade with the Washington Nationals.

The Cardinals (69-67) lost for the fourth time in their last five games to fall 3 1/2 games behind the San Diego Padres for the second wild-card spot.

The Dodgers jumped Mikolas in the first inning to take a 4-0 lead. 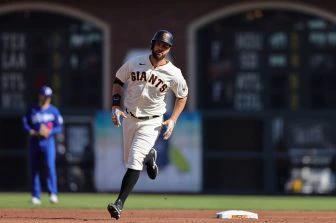 Corey Seager walked and Taylor followed with his homer.

In the third inning, Betts drew a walk, took second base on catcher Andrew Knizner’s errant pickoff attempt and scored on Seager’s single up the middle to put the Dodgers up 5-0.

The Cardinals finally broke through against Scherzer in the sixth inning when Tommy Edman hit a single, raced to third to Paul Goldschmidt’s single and scored on catcher Austin Barnes’ passed ball.

Max Scherzer started the Wild Card game for the Los Angeles Dodgers tonight. He did not make it through the fifth inning. While Scherzer gave up just one run, Dodgers manager Dave Roberts pulled his ace with one out and two men on in the top of the fifth inning.
MLB・15 DAYS AGO
FanSided

The Los Angeles Dodgers are fighting the San Francisco Giants for the NL West title and one of their fans is fighting security inside Dodger Stadium. Dodgers fans are dealing with some tough injury news surrounding Clayton Kershaw who had to leave Friday’s start early and his postseason availability is in doubt.
MLB・20 DAYS AGO
Audacy

Josh Donaldson has been following his former team rather closely this October and the former Atlanta Braves slugger and current Minnesota Twins third baseman had some thoughts about Tuesday’s Game 3 NLCS against the Los Angeles Dodgers. Donaldson was live-tweeting during the game and began to tear into the Dodgers...
MLB・2 DAYS AGO
USA TODAY

Scott Boras is furious that Major League Baseball didn’t expand the postseason rosters after playing a full 162-game schedule in 2021.
MLB・3 DAYS AGO

Why the St. Louis Cardinals shouldn’t trade for Craig Kimbrel despite him being available. Entering the offseason, the St. Louis Cardinals have a number of needs. Shortstop. Starting pitcher. A fourth outfielder. But could they look to upgrade in the ninth inning over Alex Reyes and Giovanny Gallegos?. If they...
MLB・8 DAYS AGO
FanSided

For all intents and purposes, it seems likely the Los Angeles Dodgers will retain Clayton Kershaw, their ace emeritus, for 2022 and beyond. Especially considering his elbow issues and the related complications, the safer option for Kershaw seems to be to continue the ongoing relationship with a franchise that values him rather than create a fresh start.
MLB・5 HOURS AGO
KTLA

Behind the red-hot bat of Eddie Rosario, the Atlanta Braves are one win away from their first World Series appearance since 1999. All they need to do is put away the defending champion Los Angeles Dodgers. Easier said than done. After all, the Braves were in exactly the same position last year and failed to […]
MLB・1 DAY AGO

Dodgers manager Dave Roberts made a wager with old friend Bruce Bochy that if his club lost the National League West to Bochy’s San Francisco Giants, he’d owe him a dinner and a nice bottle of Bordeaux. After 162 games, the Dodgers lost by a single contest. “It’s his choice [of wine], but you know it’s going to be something expensive,” Roberts said. The Dodgers wound up in Wednesday night’s NL Wild Card Game at Dodger Stadium, where they served up a taught 3-1 victory against the St. Louis Cardinals on a walk-off, two-run homer from Chris Taylor. The Dodgers and Giants now have...
MLB・15 DAYS AGO
Sportsnaut

Mookie Betts and Will Smith hit home runs, Walker Buehler pitched into the fifth inning on short rest, and the
MLB・9 DAYS AGO
Yardbarker

After 167 games, it all comes down to Thursday night. The Dodgers found a way to win their second elimination game of the postseason, but there is plenty of work left to do as Logan Webb and the San Francisco Giants will be waiting for them by the bay. The...
MLB・8 DAYS AGO
Dodgers Nation

Dodgers: What to Expect from Max Scherzer in Game 3 Against the Giants

Dodgers starter Max Scherzer hasn’t been at his best in his last few starts. According to manager Dave Roberts, Dodger pitching coaches have identified a few mechanical adjustments that Scherzer needs to make to get back to his old self. The team is expecting to see a much more effective Scherzer in Monday’s pivotal Game 3 against San Francisco.
MLB・11 DAYS AGO

'I lost on one pitch': Max Scherzer and the Dodgers find themselves on the brink against the Giants

LOS ANGELES - Maybe if the wind hadn't been gusting like it did all night, the fly ball Gavin Lux hit nearly 107 mph into the air with two outs in the bottom of the ninth would have traveled out to tie the game. Maybe the ball Chris Taylor hit nearly as well a few innings earlier would have gone out, too.
MLB・10 DAYS AGO
Dodgers Nation

Max Scherzer will take the mound for the Dodgers in game 3 of the NLDS against San Francisco tonight at Dodger Stadium, his second start of the postseason. After dominating in his first nine starts for the Dodgers, Scherzer’s last three starts — postseason included — have been inconsistent. Thankfully,...
MLB・11 DAYS AGO
Chico Enterprise-Record

Brandon Crawford’s leaping snag of a 100-mile per hour line drive off the bat of Los Angeles Dodgers’ Mookie Betts saved a run and ultimately the game for the San Francisco Giants in Game 3 of the National League Division Series. Crawford’s glove, Longoria’s bat and nine shutout innings from...
MLB・10 DAYS AGO
Dodgers Nation

The Los Angeles Dodgers are back in the National League Division Series for a ninth consecutive year, though their latest appearance comes by way of playing in the Wild Card Game for the first time in franchise history. The Dodgers advancing to the NLDS sets the stage for a highly-anticipated...
MLB・14 DAYS AGO
ABC7 Los Angeles

SAN FRANCISCO -- Max Scherzer came charging out of the bullpen like he was being chased. He came on so strong there was some question as to whether he left early, a false start, as if he viewed his 14 years in the big leagues as simply a prelude to this moment.
MLB・7 DAYS AGO
FanSided

Dodgers: Max Scherzer’s wild behavior during and after NLWC was a delight

Doesn’t Los Angeles Dodgers manager Dave Roberts know not to talk to (or touch!) Max Scherzer during his starts? What was he thinking?!. On Wednesday night during the NL Wild Card Game against the St. Louis Cardinals, the three-time Cy Young winner had to battle. It wasn’t easy against the red-hot Cards and he was approaching 100 pitches after just 4.1 innings of work. That’s when Roberts took Mad Max out of his zone.
MLB・14 DAYS AGO