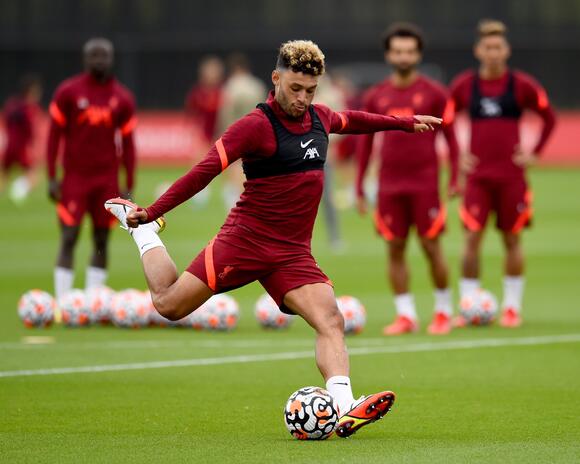 Alex Oxlade-Chamberlain is hoping to put his injury woes behind him and really “kick on” at Liverpool .

The 28-year-old missed 367 days with a serious knee injury and then four months at the start of last season.

Oxlade-Chamberlain, who has just become a father for the first time, went on to make 17 appearances but believes the current campaign is a key one for him.

“I feel like it’s just a chance for me to kick on and put down a really good season of consistent performances and hopefully some good numbers as well in terms of goals, assists. But I guess that’s all to come,” he told liverpoolfc.com.

“It doesn’t feel like a new start because it’s all been part of the journey, the story.

“But I feel like this season’s important for me to go and do something really good - hopefully on an individual level and then obviously for the team.

“I don’t really think that I’ve had, like, loads of injuries, but the ones I’ve had are big and they’ve kept me out for long spells, which I think sometimes makes people think I’m always injured. That’s a bit of a frustrating one.

“I think it’s important for me at this point to sort of try to enjoy myself, keep pushing myself as much as I can to get the most out of myself and keep helping push the team to achieve as much as you can.”

Liverpool are reportedly interested in signing Polish midfielder Kacper Kozlowski. The 17-year-old, who plays for Pogon Szczecin in his homeland, has been likened to Manchester City star Kevin de Bruyne. As reported by The Mirror, Jurgen Klopp's side are eager to secure a deal for the prospect but face competition...
PREMIER LEAGUE・14 DAYS AGO
Tribal Football

Liverpool are being linked with Brighton midfielder Yves Bissouma. Turkish reporter Ekrem Konur states Liverpool are one of a host of Premier League clubs in talks to sign the Mali international in January. He goes on to say that Manchester United, Arsenal and Tottenham are the other clubs interested in...
PREMIER LEAGUE・13 DAYS AGO
BBC

Liverpool have made tentative enquiries after Inter Milan midfielder Nicolo Barella. Secured at Inter until 2024, the Nerazzurri are willing to up his terms given the impact he has made over the last two years with the Serie A title holders. Barella's emergence has caught the attention of PSG sporting...
PREMIER LEAGUE・4 DAYS AGO

Alex Oxlade-Chamberlain is reportedly weighing up a return to Arsenal, four years after leaving the North London side to join Liverpool. The midfielder has struggled to break into Jurgen Klopp's first-choice XI this season, having been largely reduced to starts in the Cup, and late substitute appearances in the Premier League.
PREMIER LEAGUE・6 DAYS AGO
fourfourtwo.com

Arsenal want to bring Alex Oxlade-Chamberlain back to the Emirates from Liverpool in January, according to reports. The Sun writes that Mikel Arteta is interested in signing his former Gunners team-mate on loan with the option of making the move permanent at the end of the season. It would mark...
PREMIER LEAGUE・6 DAYS AGO
LFCTransferRoom

AC Milan Star Franck Kessie has many admirers, Liverpool and PSG being the biggest. AC Milan have had a bit of a revive in recent years and Franck Kessie has played a major role in that. First joining Milan I'm 2017 (on loan originally), Kessie has been a standout performer...
PREMIER LEAGUE・5 DAYS AGO
Yardbarker

Curtis Jones has handed Liverpool an injury boost after recovering from his concern to play a critical role in England U21s 1-0 victory over their Andorran counterparts. Coming on in the second-half, the 20-year-old set up Emile Smith-Rowe with a well-taken through ball to send the Arsenal midfielder clean through on goal.
PREMIER LEAGUE・5 DAYS AGO

Should Alex Oxlade-Chamberlain really quit Liverpool and return to Arsenal? He slipped well down Jurgen Klopp's pecking order after injuries cut him down in his prime - and Mikel Arteta badly needs his old pal's help

Alex Oxlade-Chamberlain is reportedly considering a shock return to Arsenal after becoming frustrated with the lack of opportunities at Liverpool. Oxlade-Chamberlain's Anfield career has been bittersweet. Many would consider a Premier League title, the Champions League and FIFA Club World Cup a success but the England international has failed to cement his place under Jurgen Klopp in recent seasons.
PREMIER LEAGUE・4 DAYS AGO
internetshots.com

Liverpool are stated to be keen to cash-in on Alex Oxlade-Chamberlain following experiences he’s needed again by former membership Arsenal. The Gunners are reportedly contemplating a transfer to deliver the midfielder again to the Emirates following his injury-hit spell on Merseyside. Oxlade-Chamberlain has slumped down the pecking order at Anfield,...
MLS・4 DAYS AGO
Tribal Football

Liverpool midfielder Fabinho admits he's been impressed by Leeds United winger Raphinha. The pair have been together with Brazil this past week. Fabinho has admitted he was aware of reports suggesting Raphinha could be Liverpool -bound and has described him as a player with 'personality'. “Raphinha, since arriving in the...
PREMIER LEAGUE・3 DAYS AGO
theathletic.com

The Premier League returns this weekend and Friday will see significant updates ahead of the next round of fixtures. That will be key to any players of Fantasy Premier League, who will be adjusting their squads before the games on Saturday, Sunday and Monday. Fans of Premier League sides will...
UEFA・2 DAYS AGO

All of Liverpool’s Midfielders: Ranked

This list will take into consideration how these midfielders have played so far and what potential they have to impact results for the team this season. This is Oxlade-Chamberlain’s fifth season at the club and what does he have to show for it? A few admittedly fantastic goals from a couple of years ago and that’s it really.
PREMIER LEAGUE・2 DAYS AGO
The Independent

Liverpool manager Jurgen Klopp wants more direct communication with football’s decision-makers as he does not believe the current situation is benefiting the game. The German said he had spoken to Premier League chief executive Richard Masters only “once or twice” during his six years in England and did not think the league’s 14-vote threshold required to effect changes had produced much good for football in general.
UEFA・1 DAY AGO
The Independent

Roberto Firmino struck a hat-trick and Mohamed Salah scored for the eighth consecutive game as Liverpool delivered a masterclass in a 5-0 demolition of Watford on Claudio Ranieri’s Premier League return. Jurgen Klopp’s side dominated from the outset to extend their unbeaten league run to 18 games, with Sadio Mane...
PREMIER LEAGUE・1 DAY AGO
The Independent

Jurgen Klopp has hit out at the FA for their lack of communication after Curtis Jones picked up an injury on international duty with England Under 21s.The 20-year-old was absent from the 2-2 draw against Slovenia due to a groin problem. Ahead of the Under-21s’ match against Andorra four days later, manager Lee Carsley insisted England “definitely won’t be taking any risks.”Jones came off the bench in the second half to assist the winner for Arsenal’s Emile Smith Rowe, but Klopp has now revealed that the midfielder will be unavailable to face Watford this weekend. Klopp said: “Curtis Jones came...
PREMIER LEAGUE・2 DAYS AGO
Tribal Football

Manchester United are being linked with AS Monaco midfielder Aurelien Tchouameni. ESPN says Monaco have slapped a £50million price tag on the highly-rated 21-year-old, who joined from Bordeaux in January last year. Old Trafford officials are making contingency plans should they fail to agree a new contract with the mercurial...
PREMIER LEAGUE・17 HOURS AGO
The Independent

Liverpool manager Jurgen Klopp has said Mohamed Salah is the best player in the world following Liverpool’s 5-0 demolition of Watford in which the forward scored one and assisted another. Klopp namechecked both Messi and Ronaldo when considering who the other goats may be, but in the end settled on...
PREMIER LEAGUE・13 HOURS AGO
SPORTbible

Paddy Pimblett wasn't happy with stewards on a 'power trip' after being kicked out of Liverpool's game with Watford on Saturday. Liverpool battered Watford from first whistle to last, to temporarily go top of the Premier League, thanks in part to Roberto Firmino's hat-trick. The Brazilian walked away with the...
UFC・15 HOURS AGO
MMAmania.com

UFC fans really seem to enjoy Paddy “The Baddy” Pimblett and his charming Scouser enthusiasm. But it was that same enthusiasm that got him kicked out of Vicarage Road Stadium after he apparently cheered a little too much for the visiting Liverpool team during their 5-0 route of home team Watford.
UFC・9 HOURS AGO