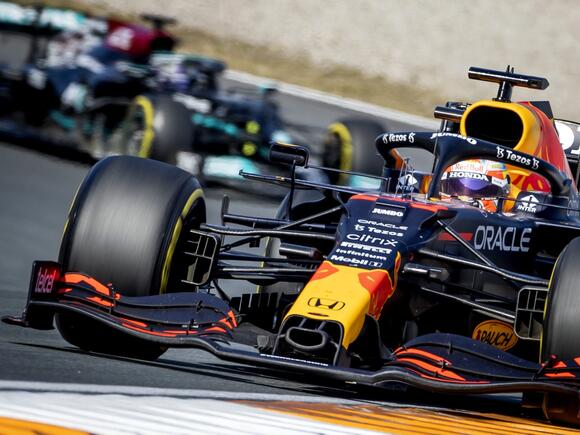 The sport returned to the Zandvoort circuit for the first time since 1985 and it was welcomed to the track by 70,000 boisterous fans.

The stands, not too far from the beach and the North Sea, were bathed in Dutch orange with almost all of the spectators there to support one man and he did not disappoint.

Verstappen, having earned the pole position during Saturday's qualifying, led from the start and Mercedes ' Lewis Hamilton was unable to ever mount a serious challenge for the race lead.

The Brit started the day with a three-point lead in the drivers standings but now finds himself three points behind and said Verstappen was "faultless."

"I was just trying to keep as close as possible but I tell you, he was fast today.

"They were on another level that I generally couldn't answer really in most of those laps," Hamilton told Sky Sports F1 afterwards.

The seven-time world champion also said his team's pit stops and strategy needed to be "perfect" but admitted they fell short.

"They were definitely faster today, there was not a lot I could do to answer the lap times they were putting in.

"We needed everything to be perfect to even have the slightest chance of getting past him through strategy for example. Pit stops, strategy, and traffic needed to be on point but none of those three were ideal," he said.

Verstappen's team principal, Christian Horner, was also glowing in his support of not only his driver but the fans that came to see him.

"Max was remarkable this weekend. If you drive through the town to the circuit, every house has got Verstappen flags. There is so much support for him, and I have never seen a nation get behind a driver in this manner.

"From the moment we've arrived, the music has been going, the build-up, the intensity, and the one person who hasn't felt it has been Max.

"He was focused on his own job, gone about his business in the same way as at other races and he almost seemed oblivious to what was happening on the other side of the fence, with the mayhem and partying that was ensuing.

"The noise on the grid, I've never heard anything like it," he said, as reported by the BBC.

The Dutch Grand Prix was the second of a triple header with F1 now heading to Monza for the Italian Grand Prix on Sunday.

Hamilton will take a 10-place grid penalty for Sunday's race after Mercedes opted to fit a new engine (ICE) to better serve him in his championship fight against Verstappen over the last seven rounds of the season. But as that news filtered in off the track, Hamilton was dominating on...
MOTORSPORTS・14 DAYS AGO
NBC Sports

Sergio Perez heads to Formula One races in U.S., Mexico with a hometown advantage

After a one-year hiatus because of the COVID-19 pandemic, F1 returned to the United States with fanfare provided by Red Bull Racing and Sergio Perez. Fresh from his third podium of the season in the Turkish GP, Perez climbed behind the wheel of one of Mark Webber’s retired cars and showcased his talent in front of more than 10,000 fans on the downtown streets of Dallas, Texas. The event reaffirmed how important the Americas are to the team and series.
DALLAS, TX・2 DAYS AGO
Insider

The man aiming to be the first non-Mercedes driver to win the title since 2013 said it would finishing second would still be a "great season."
MOTORSPORTS・14 DAYS AGO
Telegraph

A fortnight ago Mercedes nailed their strategy, helping Lewis Hamilton to another wet-weather victory in Sochi. It was a call that secured his 100th Grand Prix win and also gave him back the championship lead from Max Verstappen. The communication in Turkey on Sunday did not go quite so well....
MOTORSPORTS・11 DAYS AGO

“This Cannot Happen in the Title Race with Max Verstappen”: Mercedes Shows Concern

In 2020 Formula 1 season, Lewis Hamilton seized him seventh world championship when he aced the Turkish Grand Prix. Yet a year later on this track and the situation seems to be different. With Mercedes showing signs of concern over Lewis Hamilton’s engine. The limited amount of grip at the Intercity in Istanbul has also been bothering the Brackley based team.
MOTORSPORTS・14 DAYS AGO
The Independent

A furious Lewis Hamilton surrendered the world championship lead to Max Verstappen after finishing fifth at the Turkish Grand Prix.Valtteri Bottas took the chequered flag at a damp Istanbul Park ahead of Verstappen and Sergio Perez with Ferrari’s Charles Leclerc fourth.But Hamilton, who started only 11th after an engine penalty, pointed the finger at his Mercedes team for putting him on to new tyres in the closing stages.Hamilton was on course to finish third with the same rubber he started the race on, before Mercedes’ safety-first approach.Hamilton questioned the decision to stop and snapped “leave me alone” when race...
MOTORSPORTS・12 DAYS AGO
Daily Mail

Former Red Bull driver Mark Webber fears Max Verstappen may not have a fast enough car to take an F1 title fight to Lewis Hamilton in the final six races... despite the Dutchman taking a six-point lead in the championship

Max Verstappen's hopes of taking a stunning F1 world championship this season may have faded a little after the Turkish Grand Prix, despite taking the overall lead according to Mark Webber. Red Bull star Verstappen took advantage of Lewis Hamilton's 10-place grid penalty for changing an engine to finish second...
MOTORSPORTS・9 DAYS AGO
SkySports

Bottas led almost every lap of a gripping race in difficult conditions and sealed his first win of the season with an overtake on Charles Leclerc, before finishing comfortably ahead of Verstappen at the chequered flag. "From my side, it was one of the best races I've had, ever," said...
MOTORSPORTS・12 DAYS AGO

Max Verstappen still remains cautious amid Lewis Hamilton’s 10-place grid penalty after a thrilling Saturday qualifying session at the Formula 1 Turkish Grand Prix. Lewis Hamilton topped the timesheets with blistering pace and a ‘best-case’ scenario as he out-qualified fellow Mercedes teammate, Valterri Bottas, by a tenth of a second, before getting pushed back to 11th on the grid due to grid penalties.
MOTORSPORTS・12 DAYS AGO
SkySports

The championship contenders had contrasting Fridays for different reasons in Istanbul - Hamilton started the day with confirmation of a new Mercedes engine and a 10-place penalty but went on to secure back-to-back fastest practice times, and Verstappen, although boosted by his rival's grid drop, simply wasn't comfortable, or quick, on track.
MOTORSPORTS・14 DAYS AGO
Telegraph

Lewis Hamilton promised to take a “balanced” approach at Sunday's Turkish Grand Prix, rather than get too gung-ho, as he looks to limit his losses to title rival Max Verstappen. A brilliant performance beneath leaden skies at the Istanbul Park Circuit on Saturday ensured the seven-time world champion qualified fastest...
MOTORSPORTS・13 DAYS AGO
SkySports

Mercedes boss Toto Wolff has explained the reliability concerns that led to Lewis Hamilton taking a new engine at the Turkish GP, and is not ruling out another switch and grid penalty before the end of the season. Hamilton took a new Internal Combustion Engine (ICE) at last weekend's race,...
MOTORSPORTS・9 DAYS AGO

Lewis Hamilton could face another grid penalty this season due to reliability concerns over the Mercedes engine. The seven-time world champion took on a new Internal Combustion Engine (ICE) at the Turkish Grand Prix which cost him pole position, as he was relegated to 11th on the grid after setting the fastest time in qualifying.
MOTORSPORTS・9 DAYS AGO
racingnews365.com

Lewis Hamilton finds himself trailing Max Verstappen in the fight for the 2021 F1 World Championship following the Turkish Grand Prix. Hamilton had to settle for a fifth-place finish at Istanbul Park after taking a 10-place grid penalty, while Verstappen came home in P2 behind Valtteri Bottas. As a result,...
MOTORSPORTS・12 DAYS AGO
The Independent

A furious Lewis Hamilton surrendered the world championship lead to Max Verstappen after finishing fifth at the Turkish Grand Prix on Sunday.Valtteri Bottas took the chequered flag at a damp Istanbul Park ahead of Verstappen and Sergio Perez, with Ferrari’s Charles Leclerc fourth.But Hamilton, who started only 11th after an engine penalty, pointed the finger at his Mercedes team for putting him on to new tyres in the closing stages.Hamilton was on course to finish third with the same rubber he started the race on, before Mercedes’ safety-first approach.Hamilton questioned the decision to stop and snapped “leave me alone”...
MOTORSPORTS・12 DAYS AGO
firstsportz.com

“It’s easier to beat him as your teammate”: Max Verstappen reckons it was easier for Nico Rosberg to beat Lewis Hamilton than him

When Nico Rosberg defeated Lewis Hamilton, it saw the end of a long-term friendship in the world of formula 1. With the boils heating up race after race, fans knew that the rivalry developing between two teammates in 2016 was never going to end in a non-controversial matter. Now title protagonist Max Verstappen believes it is easier for Rosberg to get the better of Hamilton as a teammate than him, pertaining to the championship battle.
MOTORSPORTS・5 DAYS AGO
ClutchPoints

Alpine’s Fernando Alonso gets brutally honest on helping Formula 1 title contender Max Verstappen beat his rival, Lewis Hamilton. Red Bull’s Verstappen currently has a slim lead of six points over Mercedes’ Hamilton with just six races to go. This year’s battle between the two can be considered one of the most intense rivalries in the sport.
MOTORSPORTS・10 DAYS AGO
firstsportz.com

Max Verstappen has no taken the lead in the driver’s standings after the Turkish GP. With only 6 races more to go, he leads Lewis Hamilton by the same number of points. The 1997 world champion, Jacques Villeneuve feels that the reigning champion and his team has been put under extreme pressure by the Dutchman and appreciating him for the valiant effort in the tough title battle.
MOTORSPORTS・7 DAYS AGO
buckinghamshirelive.com

Lewis Hamilton has admitted he is unsure about the reasons behind improved pace for his Mercedes car in recent weeks, responding to comments made by Red Bull chief Christian Horner. Red Bull are continuing to question the power-gains of their Formula One rivals throughout the season, believing that ongoing work...
MOTORSPORTS・3 DAYS AGO